Every Blooming Thing in Early Summer

There wasn't as much time for sewing as I'd hoped yesterday. There was some time in the morning to get started on the next block for Pieces of the Past. Mainly, I just used up the bits of floss leftover from last time. My OCD acts up when I have bits of floss hanging from my floss bobbins, and so I always clean those up at the beginning of a new project. Silly, I know, but it makes me feel better. 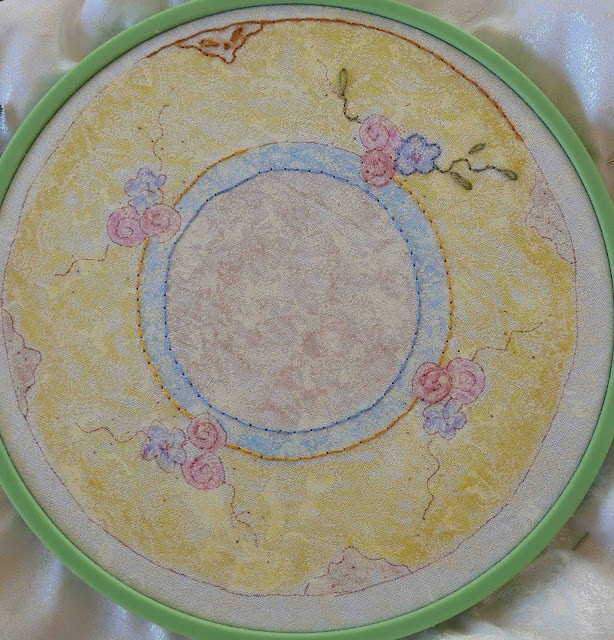 I had to make a trip into town for a few things. It should have been a short trip, but it turned into a much longer fiasco, not worth going into. I was just glad to get home, and I needed a nap after that. It didn't leave much time for sewing. Nevertheless, I was able to get the bear quilt to 75% finished. 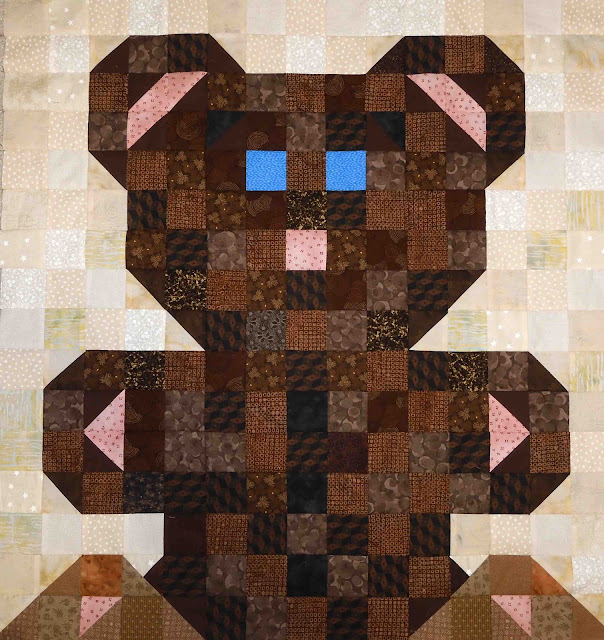 There should be plenty of time to finish the rest of the bear today. After that, borders and cornerstones and it will be ready for quilting. The backing fabric should arrive on Monday.
It was nearly dinner time by then. I tried a new recipe from our diet. I'm often suspicious of the recipes in our diet because some of them seem to include weird ingredients. This recipe for Chipotle-Rubbed Shrimp Taco Salad was one of those. It included mango and radishes, which don't seem to belong in taco salad at all. Still, the picture looked good, and so I gave it a try. When dinner is served to Mike, I always tell him, "This might be good, or we might decide to eat dinner out tonight." And this was a nice surprise. 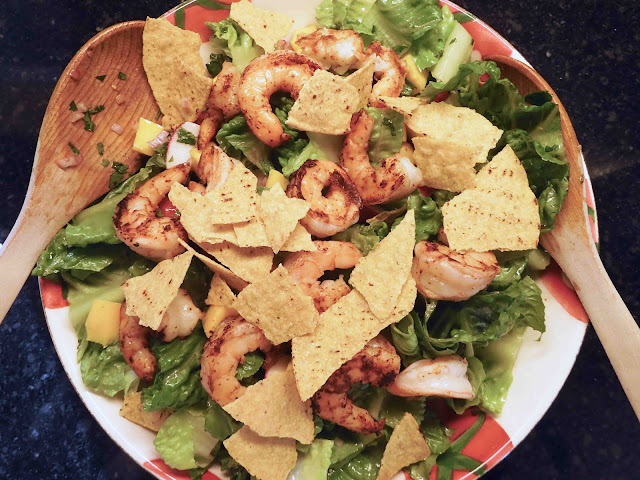 The mango added a nice tropical flavor, and the radishes I found at the grocery store were very good. Sometimes they're too hot for me, but these were just right with a nice crunchy texture. We liked this salad. The only thing I did differently from the recipe was to crunch up some leftover tostada shells over the top. Think of them as "croutons." The recipe called for a "refrigerated (8-inch) flour tortilla taco salad shell kit (such as Azteca)," and I don't even think I've ever seen anything like that. In any case, I'm not much for "kits" of stuff I find in the grocery store. So, I crunched up the tostada shells and called it good. And it was. I'd make it like that again.
After dinner I took a little walk around the garden. Sometimes when the peonies and poppies are finished, I start thinking the flowers are finished. Nothing could be further from the truth. Possibly new flowers in spring after a cold winter get my attention more than the flowers that come later. And I had to apologize to the blooming things out there now for not paying better attention.
The stargazer lily is an overachiever this year. It's sporting six flowers now, and there are still more coming. One wonders if its little stems will be able to continue to support the weight of so many flowers. 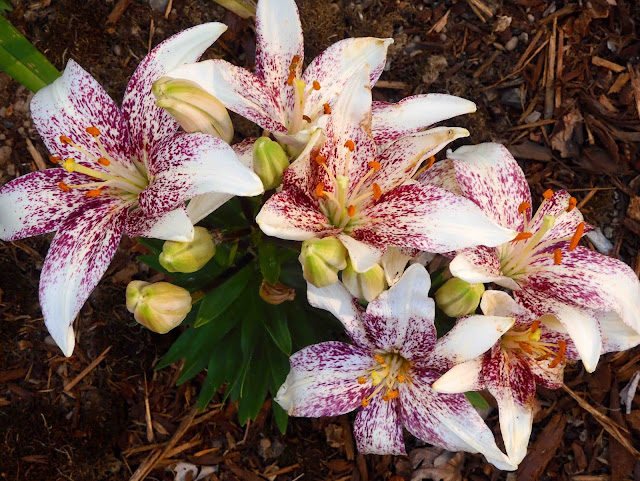 The daylilies are no slouch either. 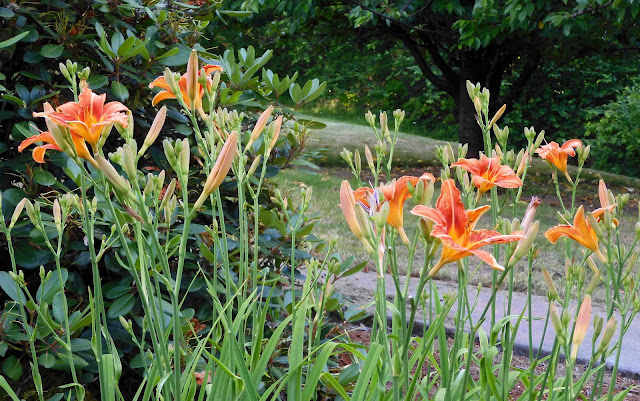 This is the first of the echinacea. It's petals were still not fully opened, but they probably will be by the end of the day. Many more are coming too. 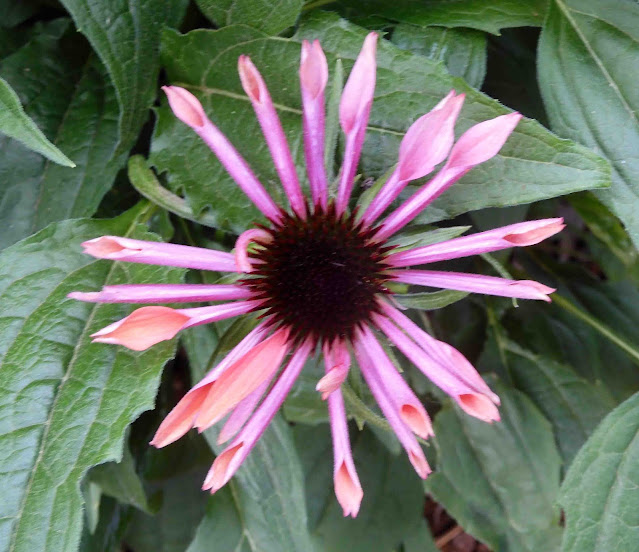 The hydrangeas are coming into full flower mode. There's another burgundy one around the front of the house, but a sprinkler was running there while I was out taking these pictures. I'll get a picture of it later today. 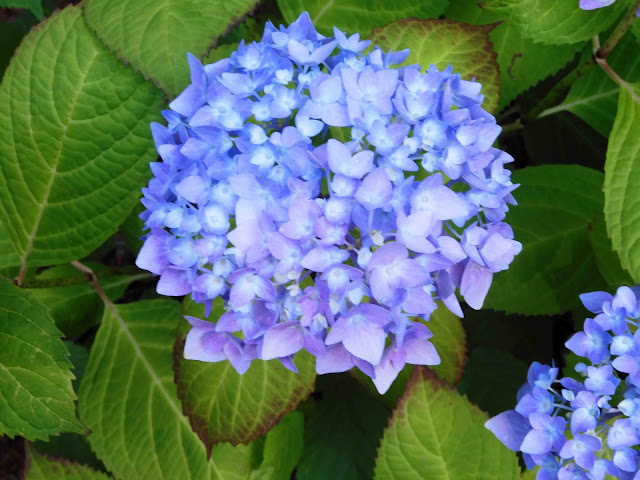 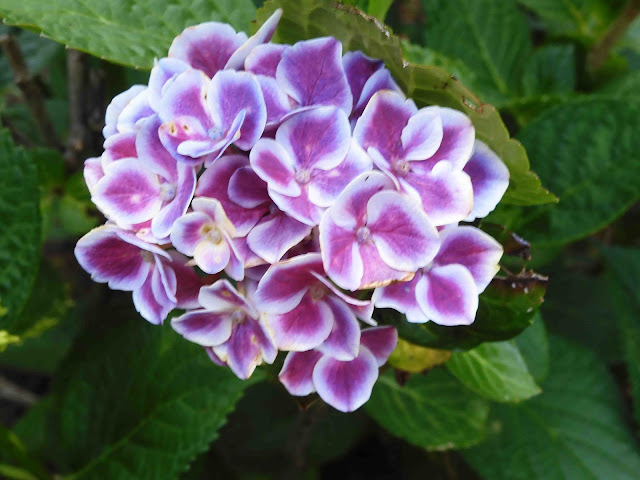 Our little rose bush has been an overachiever this year too. Or maybe the deer are just underachieving. Usually, they eat it down to a bloody stump, and they've been nibbling on it this year too. Still, most of the flowers have been left behind. 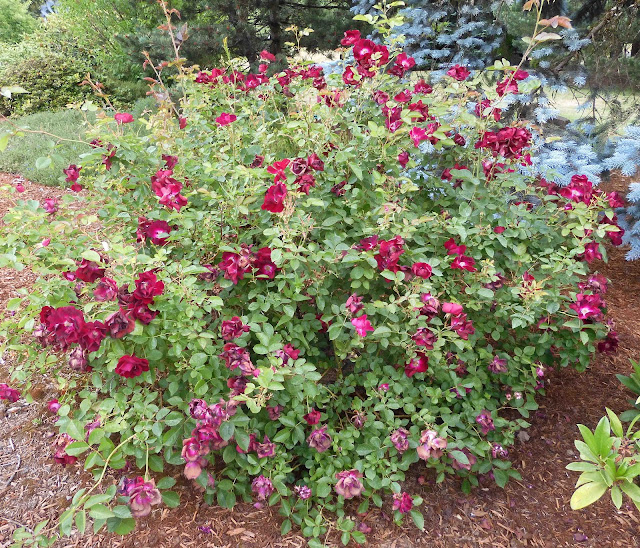 They are pretty and we've enjoyed the fragrance as we walk by. 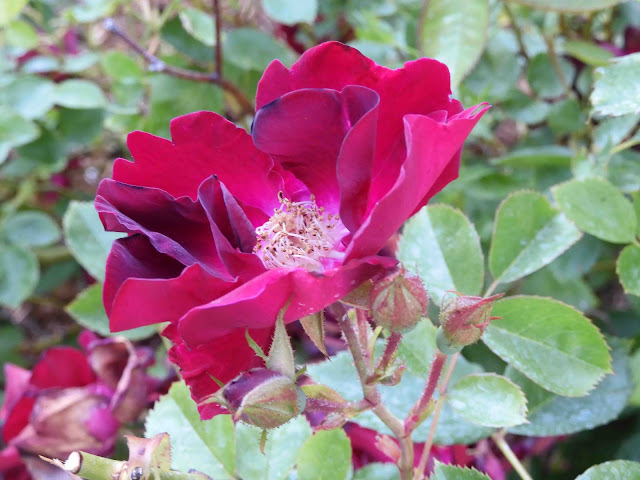 On the fruit front, the cherries are ripening fast. I'm really hoping they'll ripen over the hot weekend we're expecting. I have lots of ideas for canning them, but it will have to be next week sometime. We're traveling the following week. More on that later. 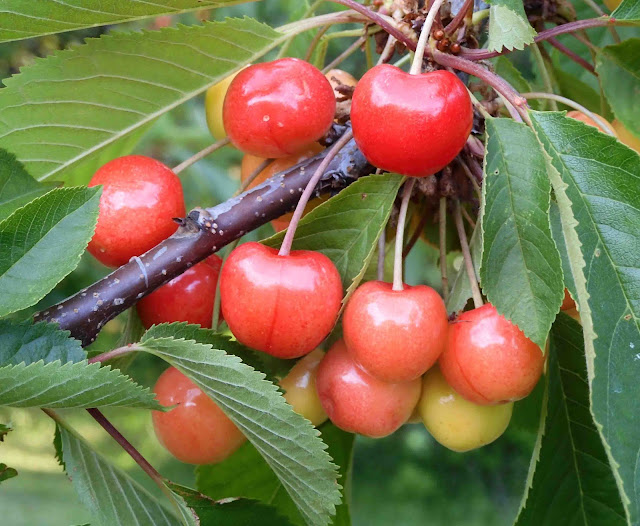 The plums are about the size of those big green Spanish olives. They won't be ready until September, but there are a lot of plums on the tree this year. It almost always sheds a good portion of them as the summer wears on. The test is whether they will ripen in time for us to enjoy them before our September trip. So much traveling, so little fruity time. 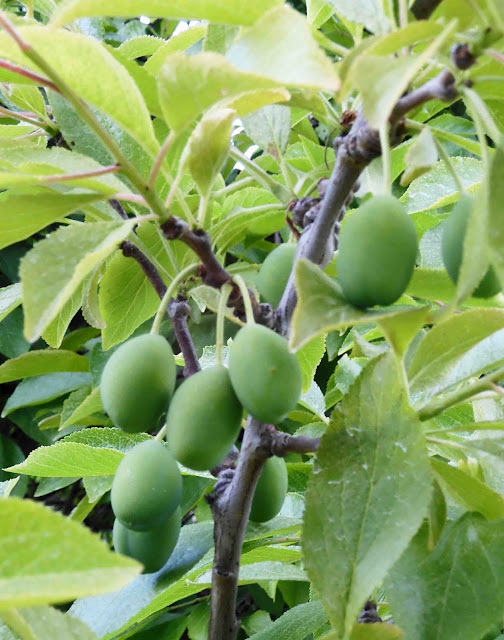 We've had to do some adjustments on the cherry tomatoes. Mike surrounded the cage with fencing, but then the plant was growing through the fencing. The fencing was going to be too high to be able to reach in and harvest any tomatoes. So we took the fencing off. When I looked outside the next morning, it appeared the plant had fallen over, but I couldn't be sure the squirrels hadn't chewed it off. Oh no!! Fortunately, it had just fallen over, and so I staked it up. Then Mike chased a squirrel out of the barrel it's planted in, and so he added some more fencing...shorter this time. The green cherry tomatoes are still safe. For now. 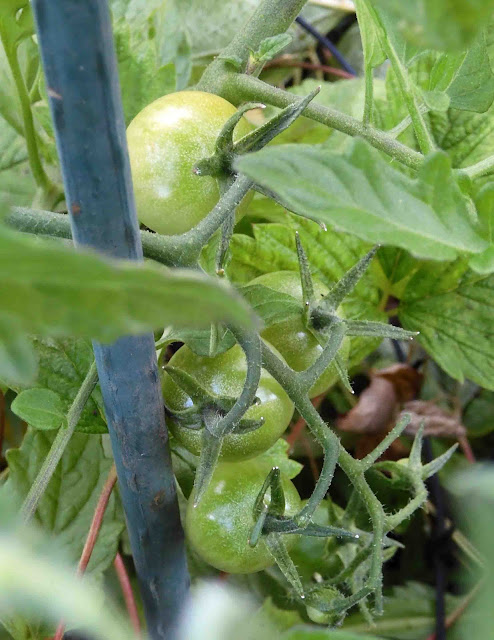 The greenhouse tomatoes are looking good. The plants are nice and green and I've stayed ahead of any insect damage so far. 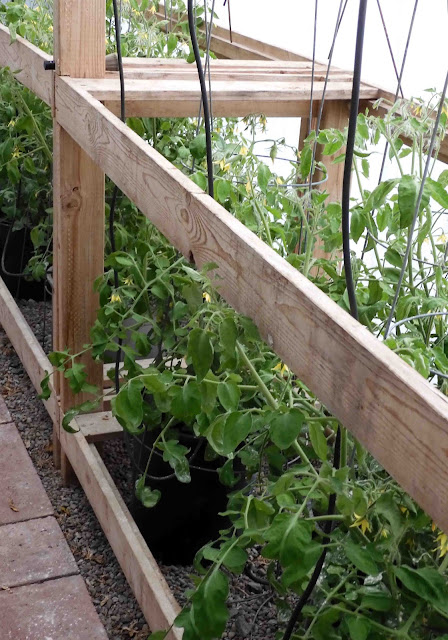 There are lots of flowers, but not many tomatoes yet. I was reassured when we were at Erik and Mae's house last weekend. Erik is an excellent tomato farmer, and his plants didn't have many tomatoes either. 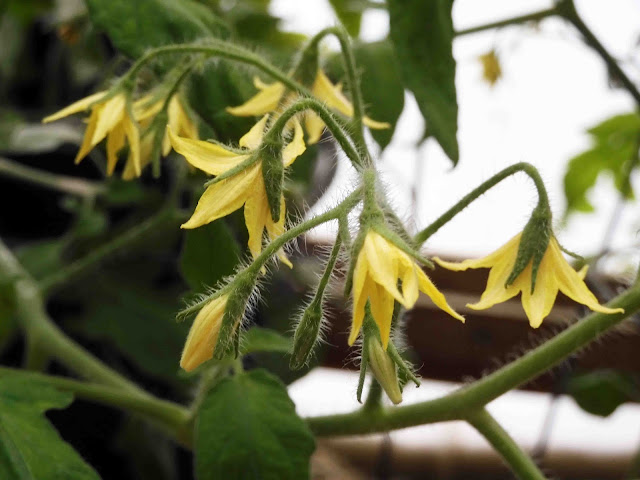 I've seen a few. We have nine of these roma plants since I'm mostly using them for sauce and salsas. 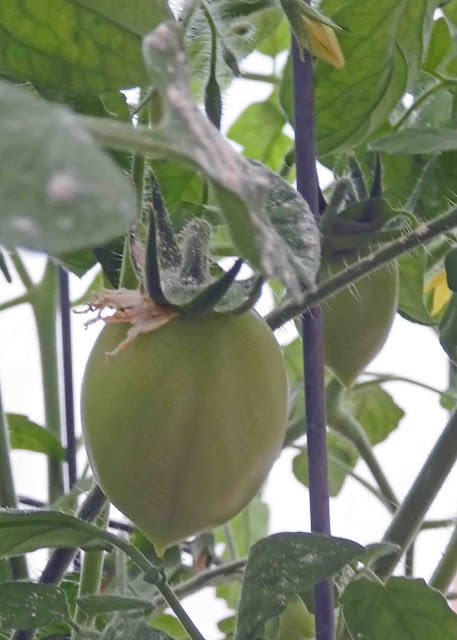 This year, we have one slicer. I hadn't seen any tomatoes on it, but yesterday I noticed two. There will be more because it too has lots of flowers. It's hard to be patient with the garden tomatoes. 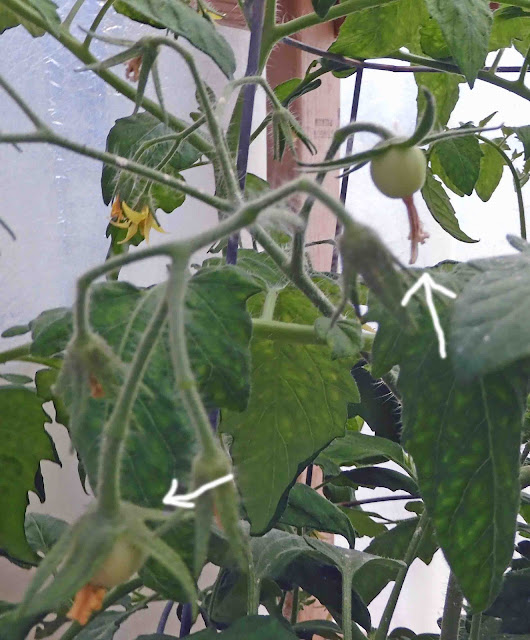 Okay, so more slow stitching and finishing off the bear are my goals for the day. We need to make yet another trip into town this morning. Hopefully, it will be the short trip we're expecting and I'll be home with plenty of time left in the day for sewing. Probably I should try fitting in some housework too. A hot weekend is upon us. We'll be working at staying cool and keeping things in the yard from burning up. Oh...but there's that word..."burning." Hopefully, no burning whatsoever.

That bear is just stinkin' cute!! ;)))
Those Stargazer lilies are beautiful as are those daylilies (I have daylilies along the front walk here just now beginning to bud out..)
Looks like you will be having a bumper crop of tomatoes...nice!!
Hugs for a great weekend. Julierose

Your garden is really looking great. Your tomatoes are so much bigger than mine. I'm impressed with how much progress you have made on your adorable bear quilt. Lastly, thank you for the yummy Chipotle Salad Recipe. A perfect dinner for a hot summer night in the PNW! I'm looking forward to making it.

Your flowers are looking gorgeous; you have such a nice variety. The food looks delicious, too! Those cherries, too! Looks like you'll have a good crop of tomatoes!

Beautiful stitching and what a lovely array of flowers in your garden. Yours are just a little ahead of mine. That salad sounds good too, I love mango in anything. Thanks for sharing all your pretty photos.

Such beautiful flowers. We've had enough rain that the wildflowers have been really pretty this year. Hope your trip to town is fast and you can get in some good stitching time today.