All Dressed Up and No Place to Go

Lucky me...no jury duty yesterday afternoon, and none today. Nevertheless, I remain ready, willing, and able to do my duty for my community. I'll need to call in tonight to see if I have to report tomorrow, but then one week will be finished. (There are no trials scheduled on Fridays.) Yay me...for doing absolutely nothing so far. Still, you've got to admit there's some heroics going on right here in my own living room. A legend in my own mind...that's me.

Also legendary...these cats. It was a hot day yesterday, and they were flat cats by lunch time. Sadie likes taking up all the space on the landing next to the stairs. All the better to trip you as you walk by. 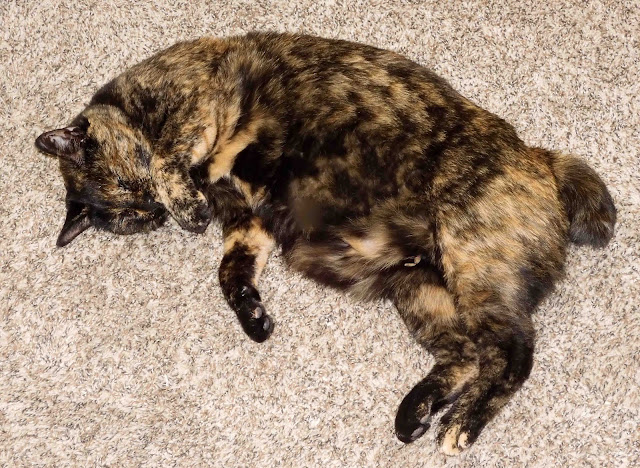 Smitty prefers his little quilt on the chair. It's next to the window where a hummingbird feeder hangs, and so he can keep an eye on the wildlife outside through the leaks in his eyelids. 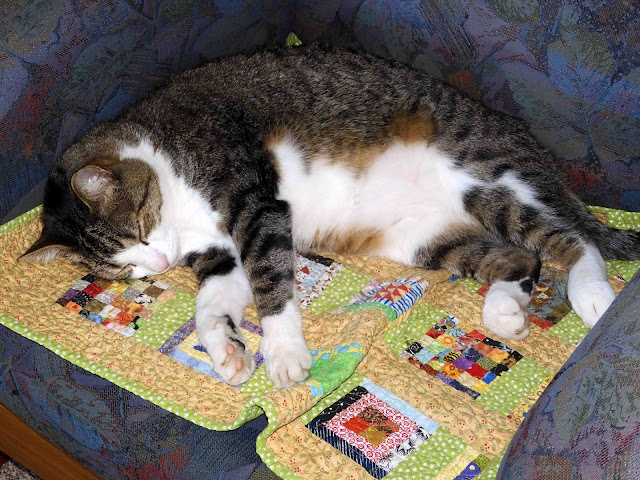 So what led to all this cat slackery? Well, we were busy in the garden, hoeing, hoeing, hoeing in case I needed to take off for the courthouse. First, I checked on the status of some other things. I noticed the first tomatoes are appearing on the cherry tomato. 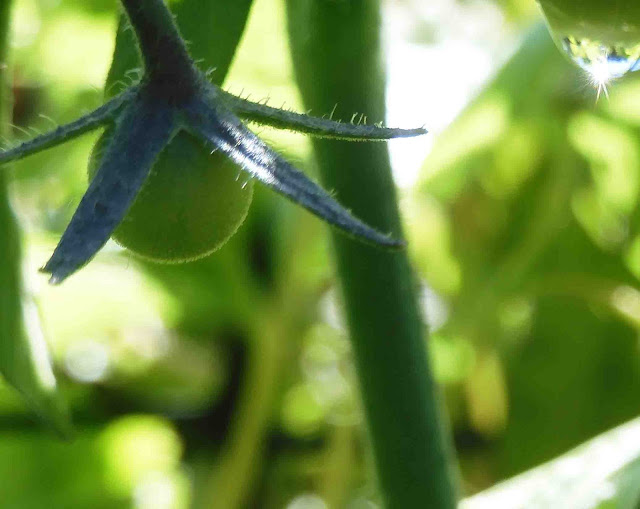 This is in a prime squirrel molestation zone (meaning, squirrels as molesters, just to be clear), and so it has a layer of chain mail protecting it from marauding freeloaders. 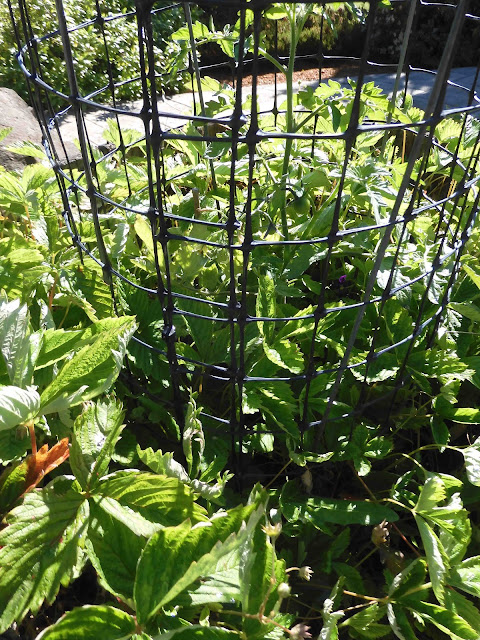 Here's a new geranium they forgot to eat. There's another one coming. Anyone want to wager how long these will last before they are bitten off? 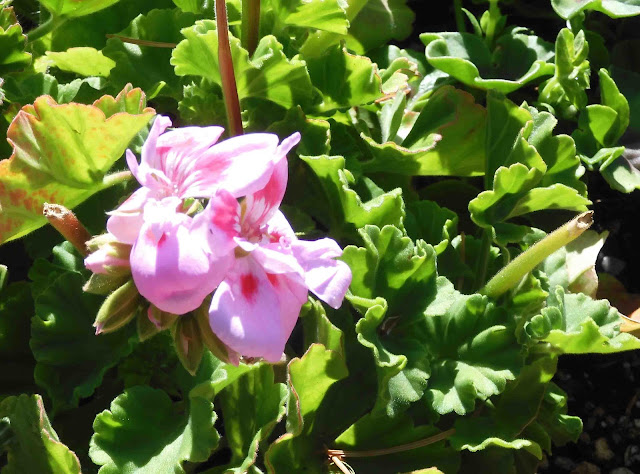 As I've mentioned, the starts of zucchini, melons, and cucumbers all died after we planted them in the garden. It's a crying shame. Too much rain, and not enough warmth, I'm afraid. They all turned white and shriveled up. You know things are bad when even the zucchini dies. But never fear. I soaked and replanted some zucchini seeds, sowing them directly into the ground. Yesterday, I noticed one had sprouted. 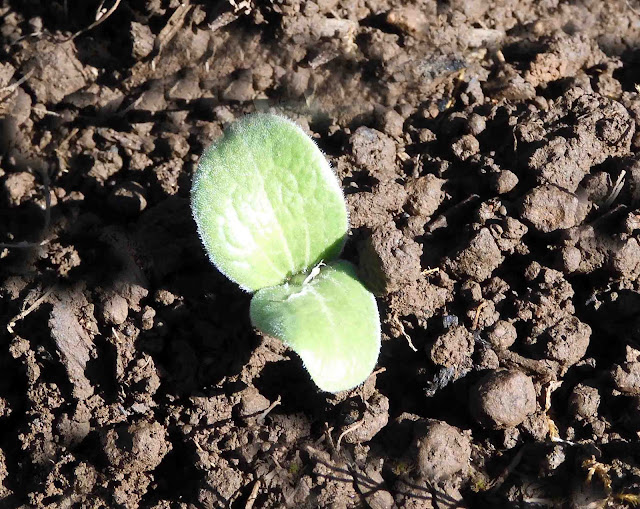 Good job, little sprout! I've also replanted ten pre-sprouted melon seeds, but nothing there yet. This morning, I'll plant the remaining zucchini and pickling cucumber seeds I've pre-sprouted. And if we don't get anything, then they'll have to hope for a better season next year. As it stands, we have all the things we grew last year. Still, I'm really hoping for some melons, and I really want to try making some pickles. If wishing and hoping can make it happen, then I'm working as hard as I can.
Lately, I've been looking forward to the first day of each month when the new Posies BOM is released. When I knew I wasn't leaving home yesterday afternoon, I prepared June's block. This is also my project for this year's Rainbow Scrap Challenge, and so I'm doing my blocks in whatever the color of the month is. In June, the color is purple. 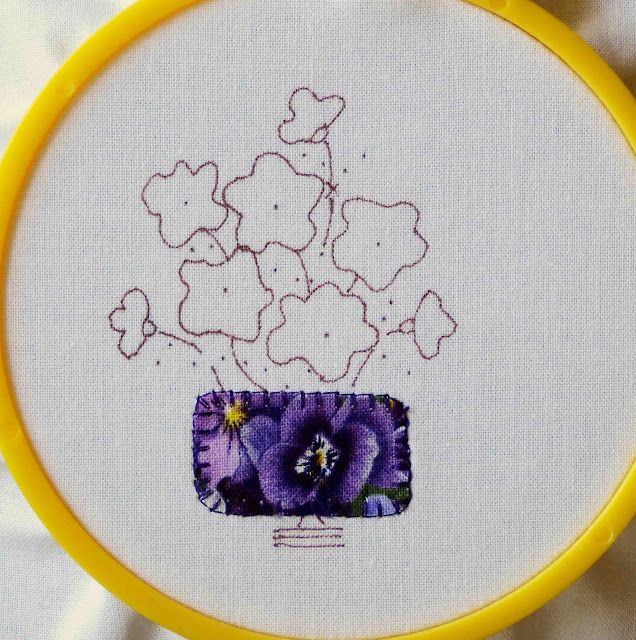 It took about an hour, but I was able to spend what remained of the afternoon stitching it up. 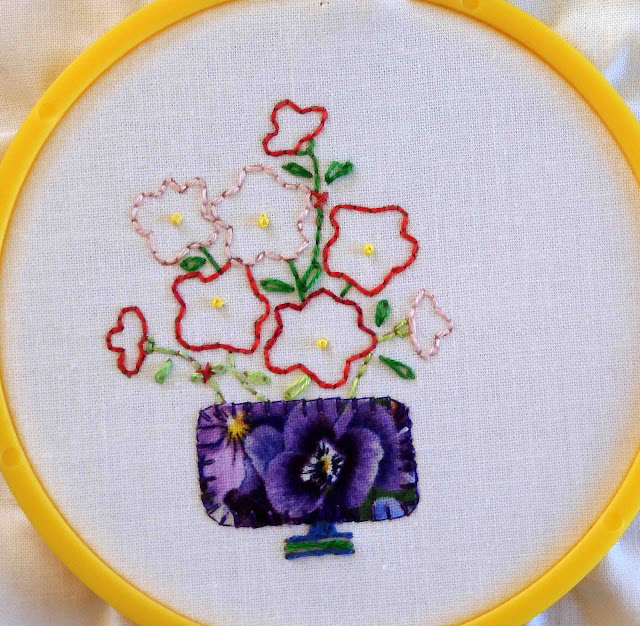 Just before dinner, I added the borders, and June's block was finished. I was happy to have another chance to use that pretty pansy fabric. 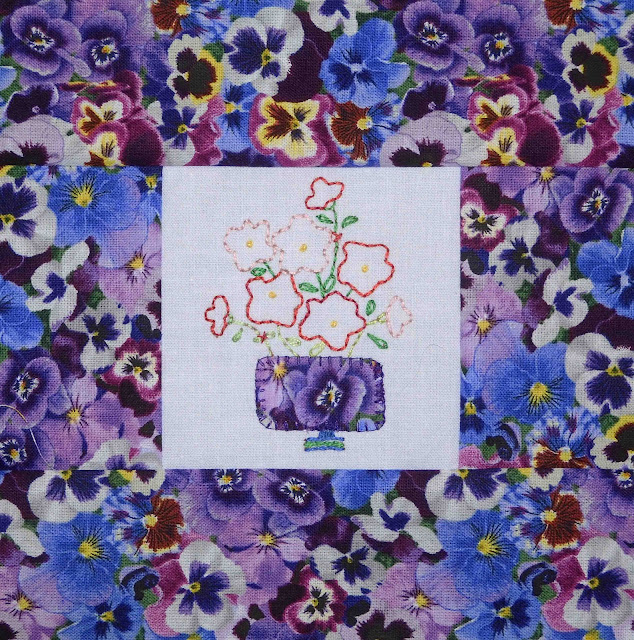 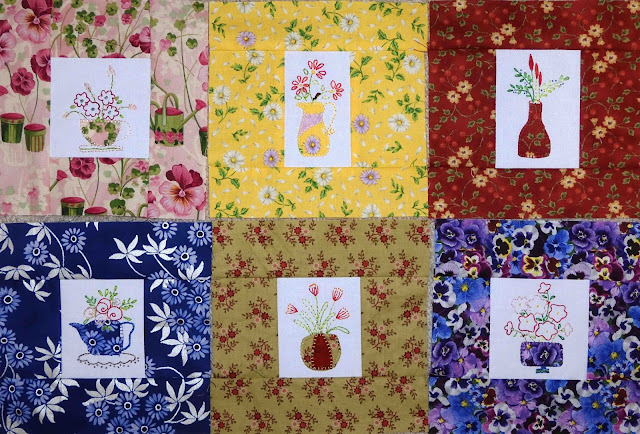 Mike has been ripping and snorting in the truck camper for the past week, working on a "surprise." Since I hadn't asked for anything, I was completely bamboozled at what it might be. Yesterday was the big reveal. Now, this isn't exactly a picture-worthy project he was working on, but this is the best I can do to demonstrate his clevarity. (Yes, that's a word I made up, but its definition is also listed in the Urban Dictionary.) 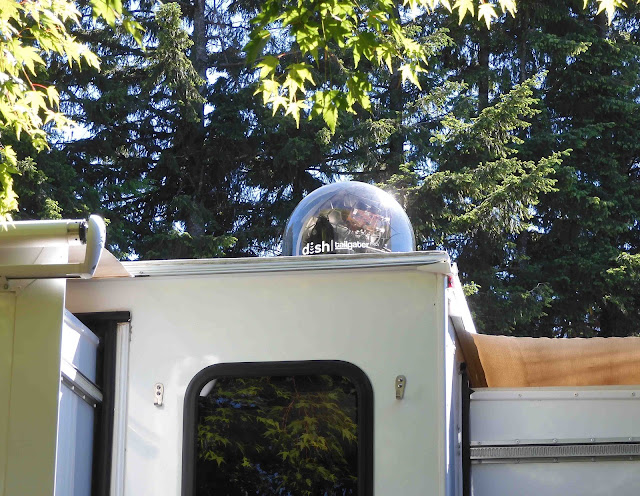 He signed up for Dish on the Go, which is a satellite TV service wherein one pays for a month at a time. When you're not using it, you pay nothing. Up until now, we've been using RV park cable when it's available. More often than not, the service is terrible, and so then we entertain ourselves with the entire series of House. But now, we'll be able to get satellite TV wherever we go. What you see in the image above is the satellite dish Mike installed on the roof of the camper. It can also be taken down and moved away from the camper if we find ourselves parked under trees. (The dish can't see any satellites when trees block the view.) And this was quite a project involving running wires here and there. He amazes me sometimes with his ambition and ingenuity.
Okay, and so with the reveal out of the way and much oooohing and aaaahing, it was time for dinner. We're hard core on our diets now. They kind of fell by the wayside during the month of May. There were too many things to celebrate, but we're clear of all that until Erik's October birthday now. Hopefully we'll make some progress.
So last night's dinner was pretty good. This is Cavatappi with Bacon and Summer Vegetables. 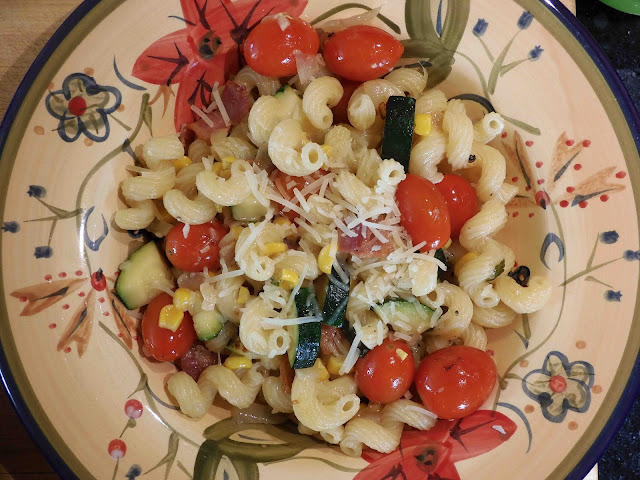 It was easy to make, and pretty darned tasty. I worried it wouldn't be filling enough to see us through the night, but the bacon added enough fat and protein to hold us over. Although I haven't eaten breakfast yet this morning, I'm still not suffering any hunger pangs. Cavatappi is one of my favorite pasta shapes. As pasta goes, it's a fairly meaty one. Also, I love a one-dish meal, and this one qualifies. I've linked to the recipe back there. I'll just add that I used frozen corn. Also, the recipe never tells you when to add the fried back to the dish. I added it along with the pasta at the end.
So that brings me to this morning. I noticed when I looked out the window that I can see the rows of corn sprouts from the living room. 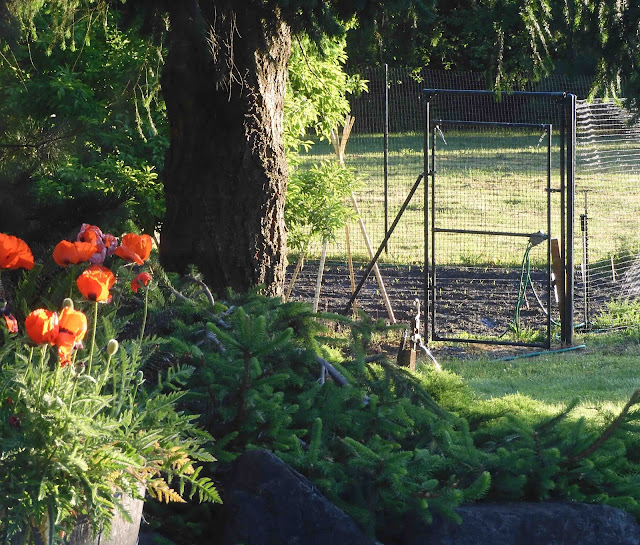 Today I'll be planting the zucchini and cucumber seeds and then crossing my fingers and hoping real hard. We have an idea for an outing today, although I'm not sure it will happen yet. We still haven't picked up our wine shipment in Salem, and so if the tasting room is open today, we'll go do that. But the winery is very close to Adelman Peony Gardens. The gardens are open for public viewing right now, and so we'll make a side trip to see the flowers. I'll ask them about my heartbreaker peony while we're there. Maybe they can offer up some ideas about how to make it bloom.
So...potentially a busy day ahead. If we end up not doing all of that, then I'll get back to my quilting. It was probably good to give my wrist a break yesterday.
Posted by Barbara at 7:25 AM

Gardening is the handiest excuse for being a philosopher. Nobody guesses, nobody accuses, nobody knows, but there you are, Plato in the peonies, Socrates force-growing his own hemlock. A man toting a sack of blood manure across his lawn is kin to Atlas letting the world spin easy on his shoulder. ~ Ray Bradbury

The RV DISH system has worked well for us in our travels. With each new campground, my husband would call DISH to get our "locals" added to the channels so we stayed current on home news. It got so that the DISH representative recognized his voice and began calling him Mr. Jim. Our friends who often travel with us do not have this; he has watched their DVD of Meet the Fockers about a billion times.
Connie

What a great surprise, Barbara! Here's hoping the garden trip works out for today.

Great travel surprise for you!! Cavatappi looks delicious...
your little pansy piece is so cute especially with that fabric...nice work
hugs, Julierose

Clever Mike, surprising you with that! What a great idea. I'm going to share that with a friend. Hope you were able to get some answers for your peony. That little quilt block is so fun, and seeing all the blocks together, they look so good!

Mike’s surprise is super cool! Hope you get to go to the peony garden - my Mom really had a green thumb with her plants. Just so beautiful and what lovely memories I have of her and her flowers. My husband recently built me a raised garden bed and I love it! However, my sugar snap peas never sprouted, so like you, I will start over in that section. Loving the posie blocks - I am participating in that BOM also. I think we are going to have a pretty little mini quilt when it is finished.

Mike's clevarity is definitely noteworthy - good for him for rigging all that up. Your new posy block looks great too. The pasta dish looks so yummy so will have to check into that recipe (btw - the devilled eggs are wonderful and we're planning to take it further into egg salad sandwich filling).

I enjoy reading your daily posts about what you're up to! The rainbow of posy blocks is so fun! They're going to make a pretty quilt.

I adore the posy project, with the embroidery blocks and the floral prints!

Hopefully by this time you're seeing more sprouts in your garden. I'd say your Posies are sprouting up beautifully!