As I drove to meet up with Sue for breakfast yesterday, I realized how drained I felt. For one thing, I was still short at least one cup of coffee. No problem there because the restaurant served up plenty. I will say that the server arrived at the table with the first cups and seemed confused about which was which. Sue drinks decaf, and me...I want twice the caffeine. So, I can't say for sure whether I was served up with unleaded or high-test, but either way...I found myself extremely tired yesterday.

Breakfast with Sue was very nice. She brought me some birthday flowers from her garden. 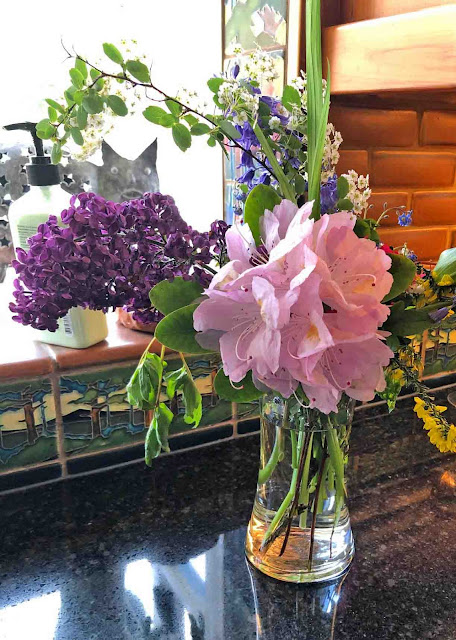 Thanks, dear friend. We hadn't gotten together since last December when we went for a refreshingly cold walk on the day before I broke my shoulder. After breakfast, I got my hair cut and colored, and that went well too. Still, what I wanted most of all was to go home and take a nap. And when I got home, I did just that.

Breakfast was early enough that I'd had no time for slow-stitching. When I woke up from my nap, that was the first thing I did. I'm working my way around the outside of the plate now. 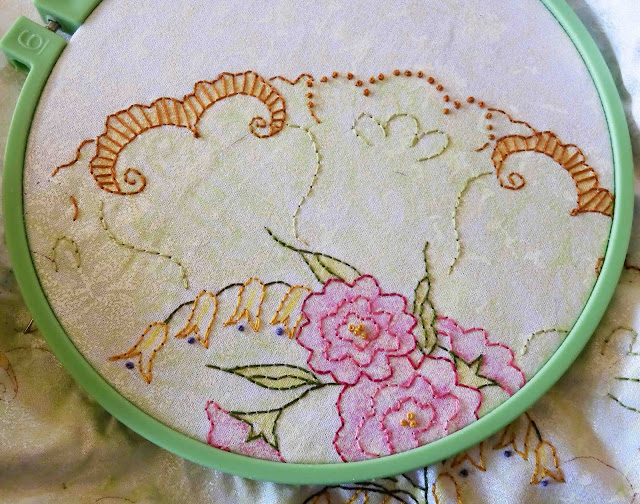 The center flowers are finished and only the gold and green sections around the outside are left. I expect to have this finished in a couple of days.
It was mid-afternoon by then. The morning was cloudy and cool, but the sun came out later in the day. I decided to go outside for a while. I sighed looking at the weedy mess that is the current state of last year's vegetable garden. The pole in the lower right-hand corner is what remains of the green bean trellises. 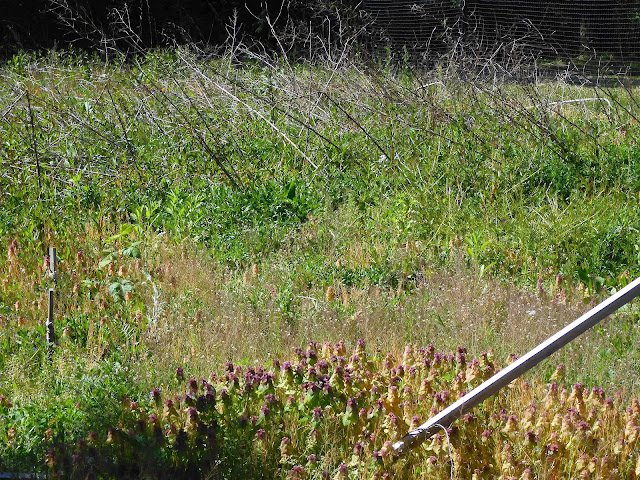 Mike and I have marked off four days on next week's calendar to plant the garden. In the meantime, he'll be tilling all of this under in preparation for planting. When we put it on the calendar like that, it becomes something I look forward to. Hopefully, the good weather we're having right now will continue. Another to-do is to repot the tomato starts into their largest pots of the season. Spring marches on.
As I gazed at the garden, I noticed quite a bit of color. You might recall we only planted about half of the fenced-in area last year and let the rest go au naturel.  That's my snotty French way of saying we let it go to weeds. Also, I threw out several packets of wildflower seeds, and we ended up with quite a bit of color. It turned out to be a good thing since the bees loved it. The whole area was humming with bees all season long, and I figure that's got to be good for the vegetables, right? So anyway...I noticed some of the wildflowers have come back.
Up next is a series of terrible pictures. I've always said the best way to get the wind to blow is to try taking a close-up shot of a flower. And, if you follow my friend Pat over at Amity Quilter, then you'll see this also works if you're trying to get a good picture of a quilt. Anyway...wandering through the garden, I was causing weed seeds to pop everywhere...waist high! It was impressive. As for the flowers, here's what I saw. Sorry for the windy blur in some of these. 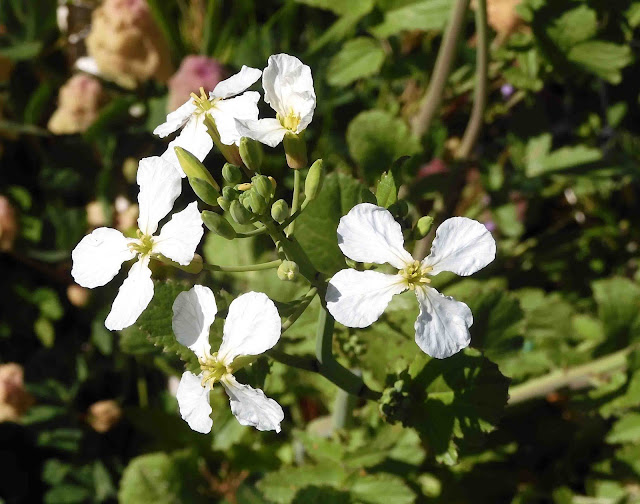 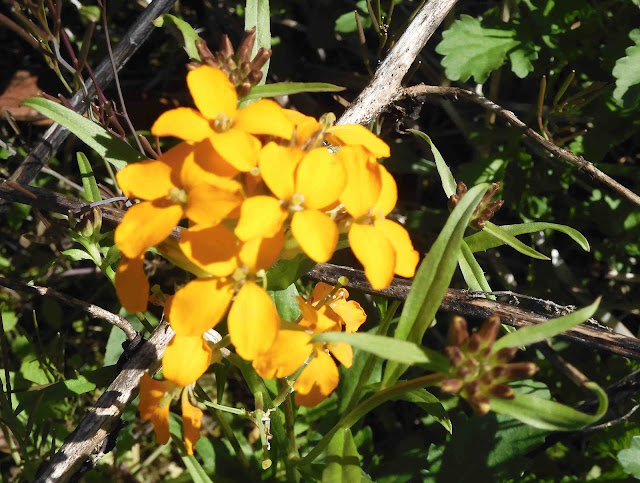 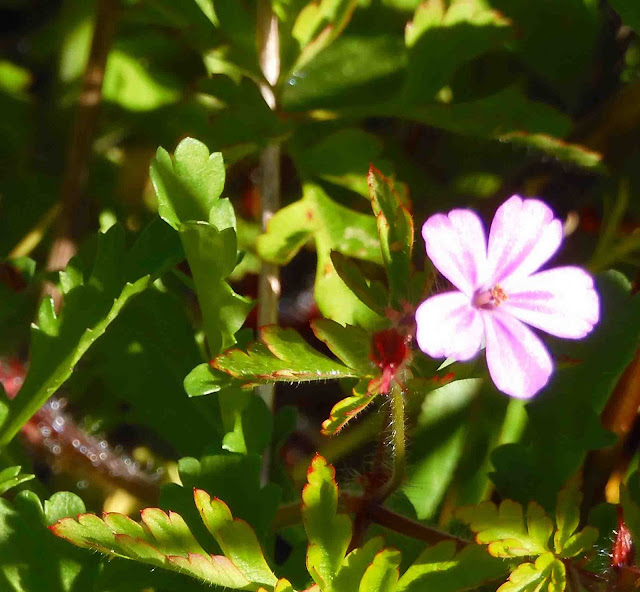 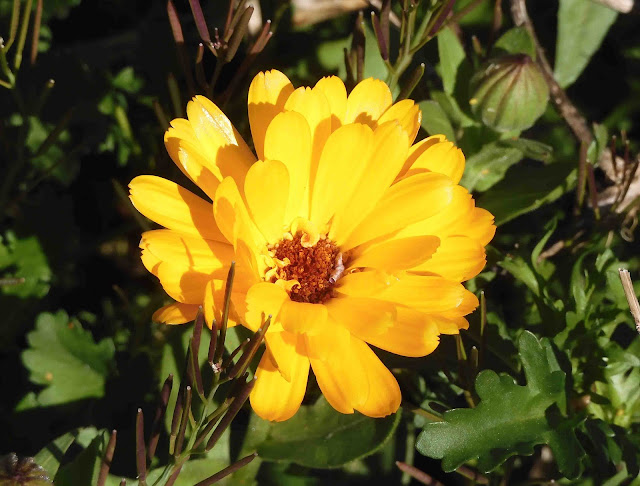 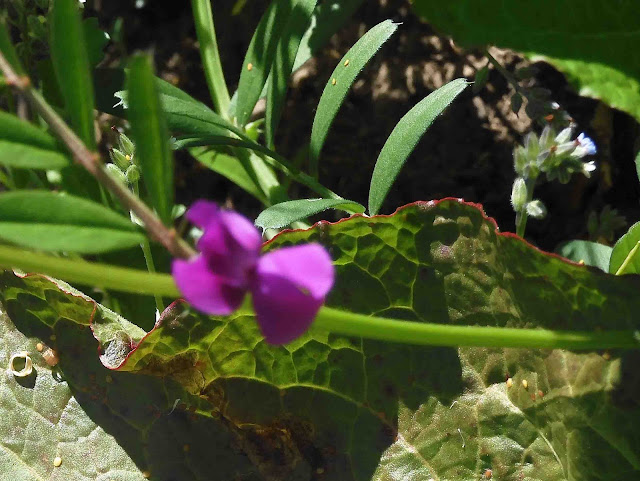 That's about all I could see in the fenced-in garden plot. Walking around the rest of the yard, I noticed some more cyclamen. I pictured the beginnings of a cyclamen blossom a couple of weeks ago. The very next day, I was sad to see the squirrels had eaten it. Now, there are some more coming on. Hopefully, these will get to bloom. There's also a peanut shell in this image, no doubt left behind by a happy Steller's jay. 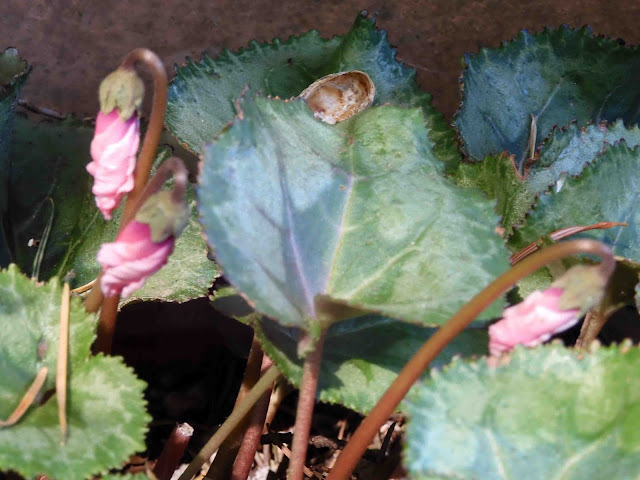 The white azalea is blooming now. 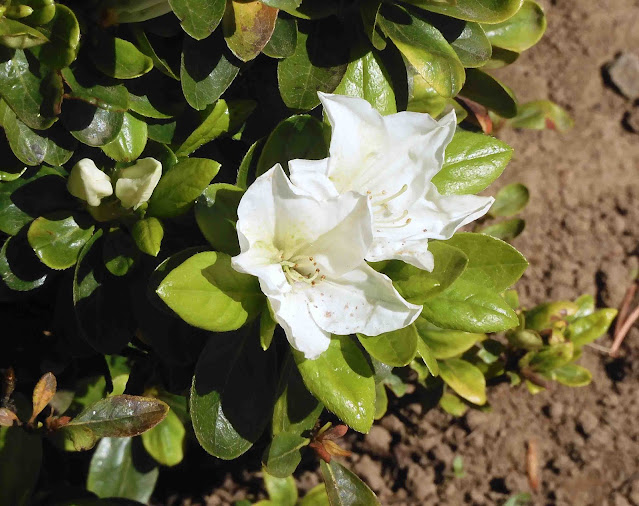 And there are cherries coming on the cherry tree. 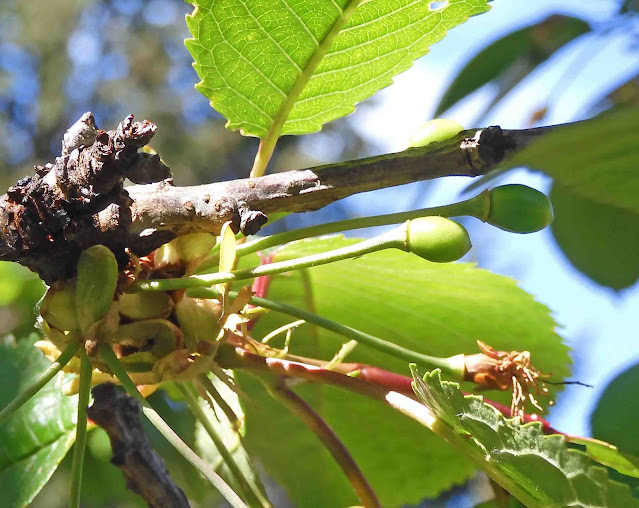 Also, the mint is beginning to fill in one of the whiskey barrels. I thought it might have died in the ice storm, but there it is...thick as hair on a dog's back. I actually had to buy some mint for a recipe several weeks ago, which was painful when I know I have so much growing in my own yard. At the time, it was still brown and dead looking. Welcome back, old friend. 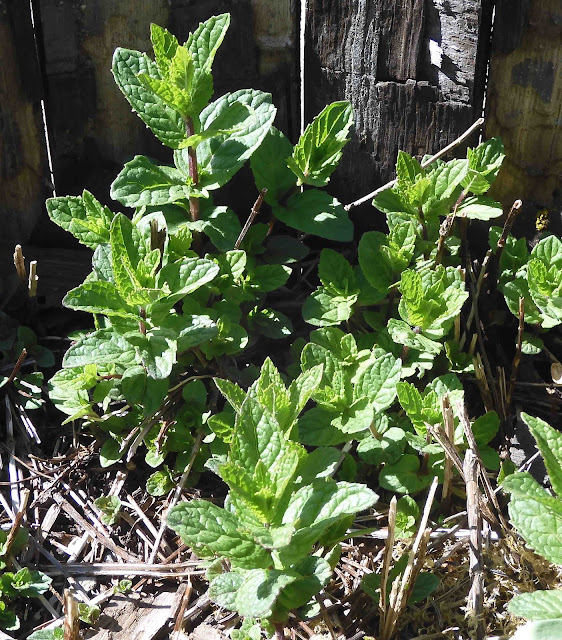 Smitty was having a terrible time on his catio. The squirrels love to mock him when he's locked inside. He kept looking back at me with the most furrustrated expression that said, "Lemmee at him!" 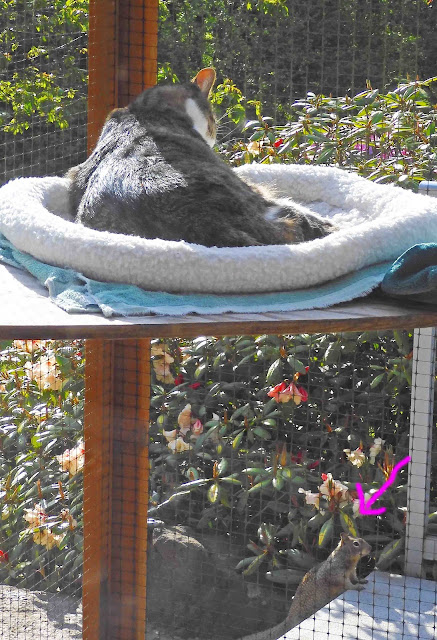 So all of that to say I'm very tired. I can't even say why, except that the beginning of May is always fun and hectic at the same time. We have lots of birthdays, and we're always working at getting the winterkill cleaned up outside. Add in necessary appointments, including PT, and I need a little time to rejuvenate. That said, I've promised myself a sewing day today. I'll probably do the laundry too since it meshes well with a sewing day. It forces me up from the machine at regular intervals, and it gets a necessary task done.

Lately I've done some rethinking about how I "schedule" my work flow in the sewing room. At regular intervals, I start feeling internal pressure to get things done in the same way I did as a working person. As a working person, the pressure was also from external things too. As a retired person, I'm often reminding myself that nobody cares how much I accomplish in a day, and I need to cut myself a break. I won't go into the ins and outs of this except to say, I'm taking a more relaxed approach to my sewing to-do list. Sometimes the voice in my head tells says something along the lines of "What if I die and this isn't finished!?!" And then I remind myself that nobody will care. Undoubtedly, when I die, I will leave behind things that are unfinished, and it will be okay.

So with that in mind, and a designated sewing day ahead, I awakened to a beautiful sunny morning and considered the tragedy of spending such a nice day in the basement. I've been telling myself I want to get back to walking several days a week. I think today is a good day to start, don't you?

So off I go. Slow-stitching, then breakfast, then a walk around the neighborhood. No doubt I'll find more wildflowers in bloom. Let's just all go a little wild today, okay?

When life is not coming up roses, look to the weeds and find the beauty hidden within them. ~ L.F.Young

I am trying to not work as if it's a factory in my sewing room. I found myself just sewing for over an hour on string blocks--then wondered "Why am I so tired?" DUH...;000
Anyway--your plate is looking beautiful--this will become another lovely "embroidery quilt" piece.
Hugs julierose (almost a year older, but knowing no better, it seems)

Enjoy your walk. Hope you feel more rested soon. Maybe a good nap (after the walk) is what you need.

I don't think you can kill mint. Once you've got it, it's there forever. And maybe your tiredness is a reaction to your vaccine shot. I know it's been a while since you got it, but others have complained of being tired after their shot. Lovely wildflowers, but boy is your garden going to be filled with weeds after letting go "au naturel"
Pat

I hope you enjoy a lovely walk, with many pretty flowers along the way. I've decided to slow down my sewing commitments this year, and I'm really enjoying time to just do "whatever". After a long winter, it's nice to be able to spend time outdoors - so enjoy!

Meeting up with Sue for breakfast is a wonderful way to keep up friendships. Two projects today. Make sourdough bread. One loaf for us and one loaf for the 11 year old birthday girl next door. She loves homemade sourdough. I’ve also been working on making a round paracord string for the Cats Cradle game. Saha is unfamiliar with the game. Her mom, who grew up in India remembers playing the same game. Saha is being remote schooled since last March with very little interaction in person with kids. When cleaning out my moms house, my book on cats cradle was found sans string. I thought this is a perfect gift as she can play solo or with her mom (or me). It turns out Cats Cradle, regardless of name, is played throughout the word in all cultures. I guess boredom and string are a common factor that creates the string game wherever kids are found.