Eliza Gets her Day

It's been quite a while since I've attempted any quilting on my mid-arm machine. As you know, I saw the hand specialist in the morning, but I was home in plenty of time to get a start on April's OMG...to quilt and bind the Sundress quilt. As for the hand specialist, he didn't offer up any magic for my thumb. Time and patience will be the watchwords there. His only option was to fuse the joint permanently, and I'm nowhere near ready to make that move. On a positive note, it does seem to be improving with time. I doubt it will ever be the same as it was, but if the pain continues to decrease, I'll be happy.

As for the quilting, the Sundress quilt is one of my older WIP's. I started this project back in 2017 and I worked on it while we were making our trek around the perimeter of the USA. It was there I first encountered the dreaded bullion stitch. After watching several very unhelpful YouTube videos, I gave up and did something else. Four years later, I'm stitching them like a pro. Here's one I did on one of the stitched inchies projects. It's the little rose right there in the middle. It's possible Meg Hawkey had a video on her website all along, but I didn't see it back then. If you're interested in seeing how this is done, you can watch her video right here.
So anyway...the quilt has been finished for a long time. It was my December OMG to quilt and bind it, but then...I fall down and go boom. It was good to get started on it yesterday. It's going to need to be a slow process, but I'm confident I can get it finished in April. (Sounds like famous last words, doesn't it?)
Here's a picture of the whole quilt so you can get your bearings: 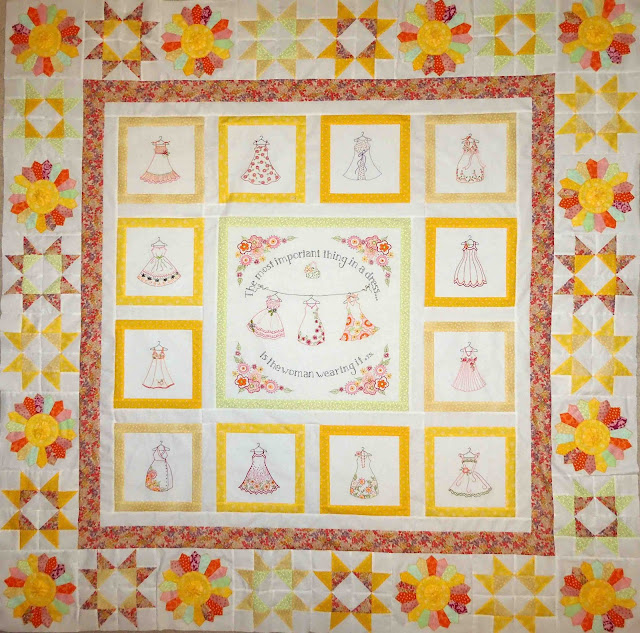 My goal for yesterday was to quilt the center panel. So I started by doing a little feathering around all four corners. 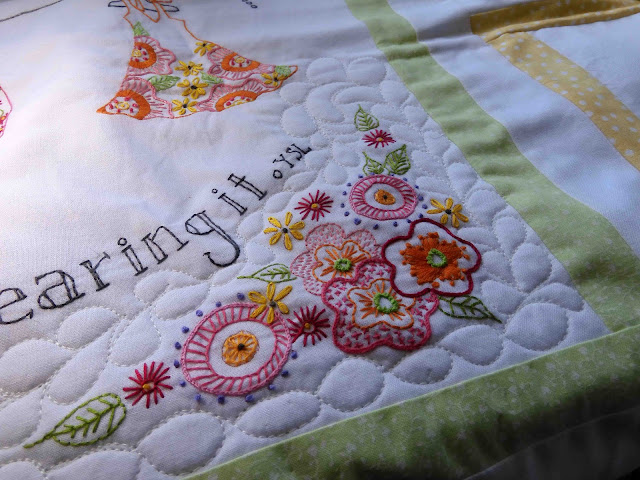 In the middle, I did a kind of meandering flower motif. 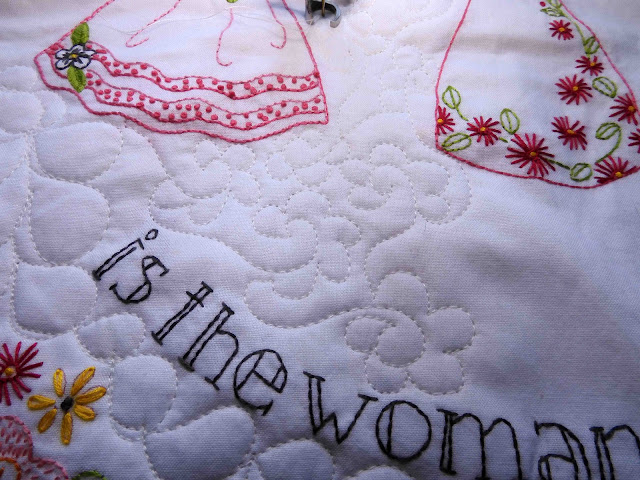 Smitty wanted to make sure I didn't go too fast...all for the sake of my shoulder's comfort, doncha know. 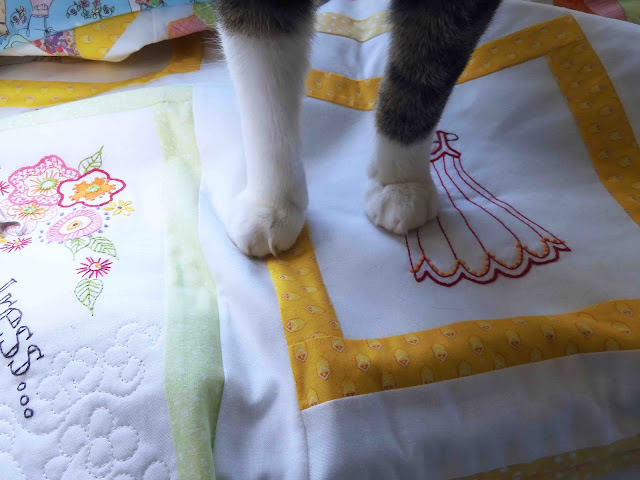 When I had it finished, it looked like this: 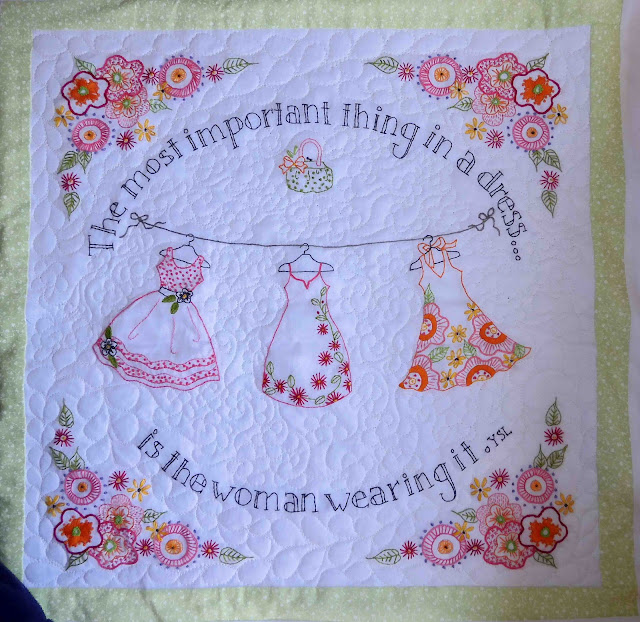 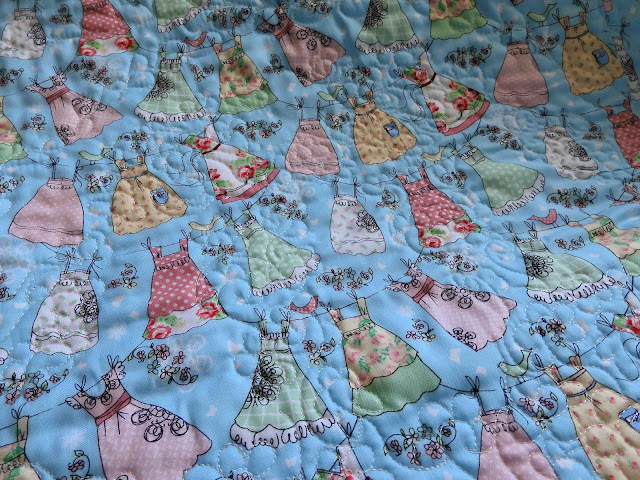 And I was able to do all of that fairly comfortably. It was tempting to keep going, but I'm allowing the part of me with better judgment to make decisions where my shoulder is concerned. So I stopped there. Today I should have time to start working my way around the sashings and into the dress blocks, but I'll be taking my time. No more than three dress blocks in a day. If I can tolerate that well, I might add another block day by day.

Also yesterday, I stitched enough of the Heartland Barn to move my hoop. 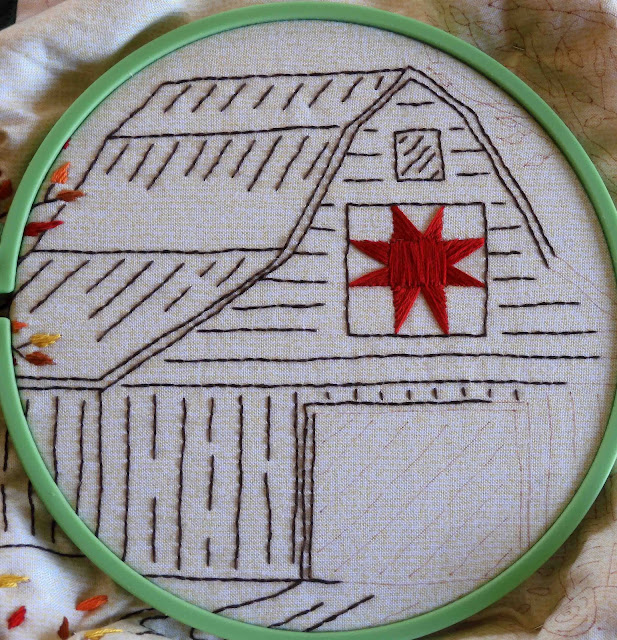 Now I've moved it to the bottom of the piece where I'll be filling in the barn door, completing the road, and stitching a tractor that's parked there.

When I got home around noon yesterday, the light was good for attempting a better picture of the flowering plums. They are so pretty against the blue sky. 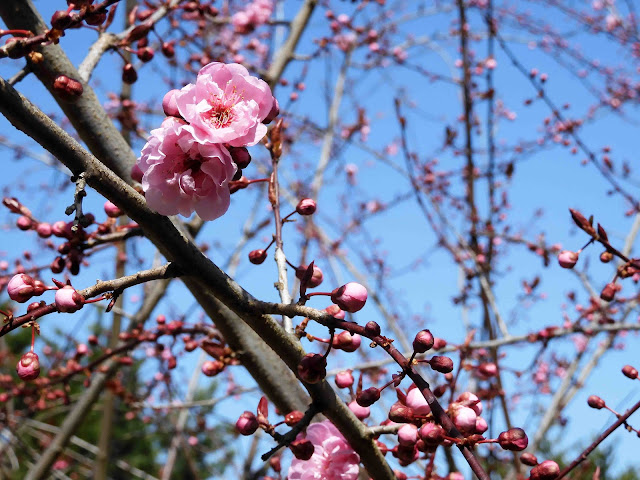 This one tree is the only one of our dozen or so that has begun to open. The rest should be close behind. 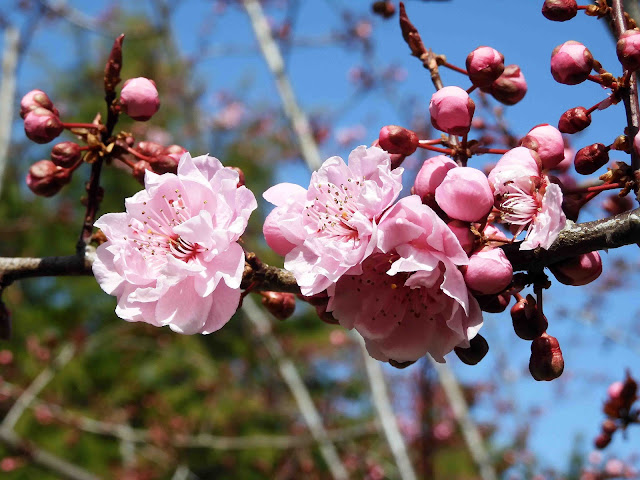 By later in the afternoon the star magnolias were opening all the way. I just love these. 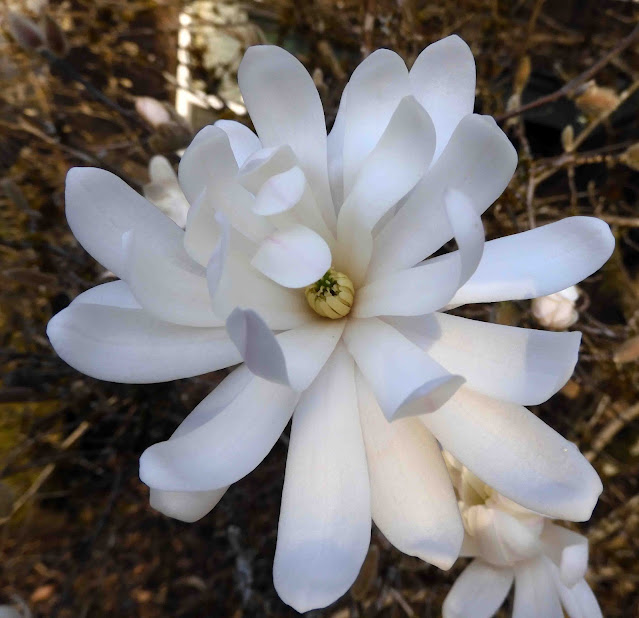 They are so delicate and pretty. On the undersides of the petals, there is a pink line. 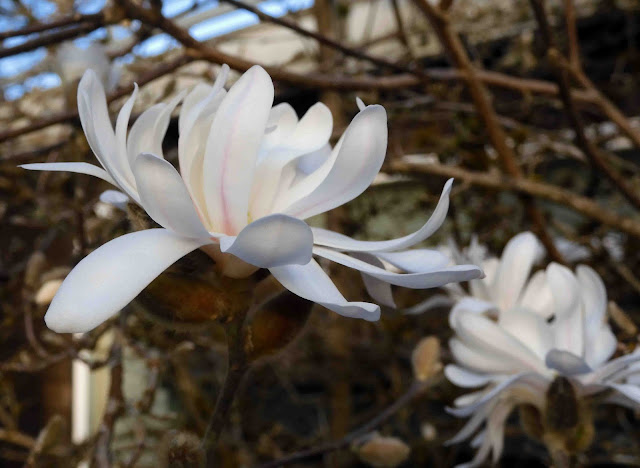 It's a gift when they can open without getting beaten up by the rain. 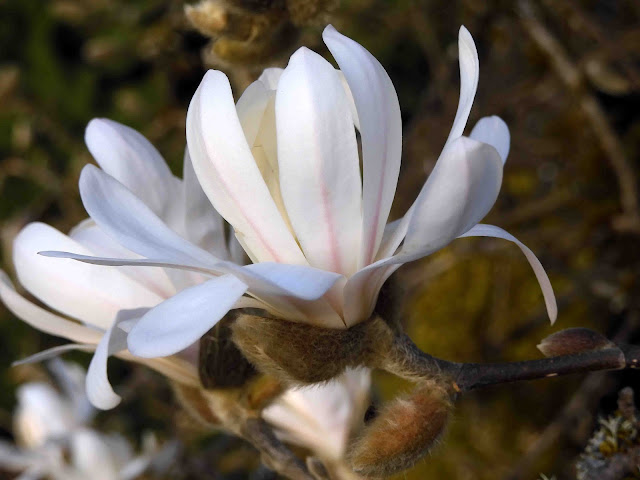 It has cooled off some today, and we're not expecting any sunshine. The rest of the week will be on the coolish side, but no rain is expected. A roofer is coming by today to talk about options for our roof. It's original 30-year life expectancy has come to an end. After last year's fire debacle, we considered doing a metal roof, but we're afraid that's going to be prohibitively expensive. We can do asphalt shingles for about half the cost. They should last another 30 years, and so we won't have to put on another roof until I'm 97 and Mike is 99. That ought to hold us. We haven't given up on the metal roof yet, but cost may be the deciding factor. As you might guess, I'm totally thrilled to be meeting with a roofer this morning (not).

But before I go, here's something fun. Matthew's main squeeze, Lyndsay, is returning from Bali in a few days. She'll have to quarantine for a couple of weeks before we see her. I've been communicating with her via Messenger, and she sent me some pictures of some beautiful hand woven cotton fabrics several days ago and offered to get some. I mentioned I had a landscape quilt in mind (one that's been on my to-do list for about ten years), and I sent her a picture to give her some ideas about color. She sent me this image showing me what she'd picked out. Aren't these perfect? 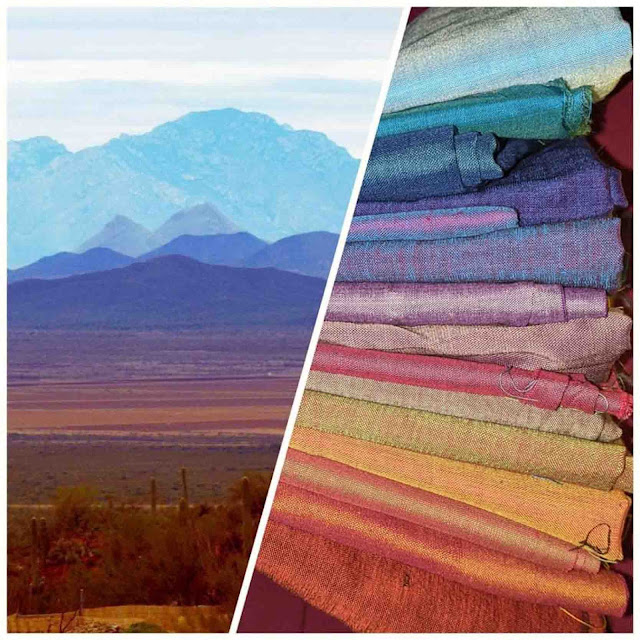 She's such a sweetheart. I'm looking forward to seeing her after a long pandemic-related absence.

Also, Matthew found a vaccine appointment, and so he'll get his first vaccine next week. He isn't supposed to be eligible until the 19th, but he found a clinic with more supply than demand, and they agreed to give him an appointment sooner. As he explained it, "I kept asking, are you sure?" And they said, "Yes, just take the appointment and stop asking stupid questions."

Okay...so onward. The roofer is coming, and I must pretend to be interested.

Even a happy life cannot be without a measure of darkness, and the word happy would lose its meaning if it were not balanced by sadness. It is far better take things as they come along with patience and equanimity. ~ Carl Jung

What a pretty bundle of fabric and very close to your image - great eye. After having an ankle fused, I refuse to have that proceedure ever again on any part of my body.We are just seeing tiny budlets on the trees - I want to be a slow process not only to enjoy, but to be sure any fruit barers are out when the bees are active.

You've made a great start with quilting your sun frock quilt, good idea to pace yourself though. What a wonderful bundle of fabric you will be getting soon, bet you are drooling already. Just dont do it all over that gorgeous range of colours.

I'd say Lyndsay is a keeper with great future quilter potential! Those fabrics look wonderful! Loving your sundress quilt and your quilting didn't suffer at all from the hiatus, beautiful! Vaccines are now finally available here for everyone 16 and above.

Sundress is really looking lovely!! Happy to hear your son has an appointment for his vaccine. My twin grandsons are slated for April 28th...for their first one...
I am still working on mini charms...hugs, Julierose

Another gorgeous quilt, beautiful flowers, just good all around. Lyndsay has a wonderful eye for color, the fabrics really are perfect. And yay on Matthew's vaccine appointment!

What a fun post. I'm delighted to hear Matthew is scheduled for jab #1 and his love will soon be back on US soil. BTW - She has excellent taste in fabric colors and I hope you asked her to pick up some for you. Yummy colors that would be fun to create with. Your garden looks like it is in perfect Spring bloom. Thank you for the beginning stitchery tutorial. Very much appreciated.

Please don't overdo the amount of time quilting on the sun dress quilt.
What great matches Lindsay made with the fabrics for the landscape. I think she is your keeper too :-)

That sundress quilt is one of my favorites of your quilts. You put it together so well, right down to that great backing fabric. The quilting is looking good, and I think you are pacing yourself well. Roofing is expensive but necessary - and noisy. Fun times ahead! How neat that Lyndsay offered to bring fabric home to you, and boy, did she do a great job of choosing them. That is going to be a fantastic quilt! Yay for Matthew's persistence paying off too - haha. I think you taught him well!

Those are great fabrics that Lyndsay chose. Such a shame that covid caused a long absence. Love the spring blooms, just what I needed to see on a very cold spring day.

The cotton from Lynsey are beautiful and they almost look like raw silk. That will be beautiful.
Metal roofs are supposed to be great but some say they are noisy when it rains. In Canada they are VERY expensive.
Re your thumb. At QuiltCon Heidi Parkes (I think I have that right) is a quilter and she did a short session on yoga for hands. I found it quite useful for the problems I have had in the past. Her video might be available. I just ignored the airy/fairy stuff and found it helpful.

The Sundress quilt is by far one of my favorite embroidery quilts of yours. Maybe because the colors are bright and fresh but I love it! It's good to hear your shoulder has improved to the point you can FMQ, even if it's not as long as you might wish. Sounds like it will get there with physical therapy.