It's going to be a busy day today. We're getting our second vaccines, and then meeting up with our friends for a wine tasting. Right now I'm just hoping the timing all works out and that we're not delayed getting our vaccines. So I'm here early with today's post. I'm still catching up on what we did during our days at the beach.

As I've mentioned before, I have manila envelopes containing "bucket list" items for every state in the union. We pulled lots of items when we made our trip around the perimeter of the USA. When I learned Bill and Lenelda were coming, and where they were staying, I pulled out my Oregon folder to see if there was anything of interest in the vicinity. I came up with at least a half dozen articles about the same place: the Drift Creek Falls Trail. According to the AllTrails website, "This hike offers something for everyone, a waterfall, a huge suspension bridge, and a lush experience of the Coast Range forest. The trail is wide and well maintained." The pictures posted by others looked amazing, and so we decided to give it a go.

Mike and I did the trail on our own, which was probably just as well. We followed the directions on the National Forest Service website for reaching the trailhead from the south. After driving at least 20 minutes on a narrow winding road, we came to this: 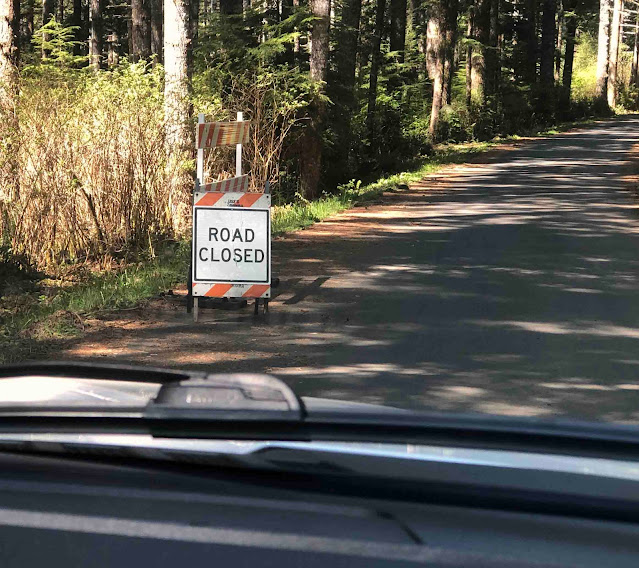 Oy. We knew we needed to pay a day use fee of $5 to use this trail, and I'd been so involved making the online payment, I neglected to read the "current conditions," which clearly stated: "Forest Service Road 17, near Drift Creek Falls, is closed indefinitely at the junction of FSR 1790 with a landslide blocking its path." Okay, well, no worries because we were able to access the trail from the north. All-in-all, it took us about an hour and a half just to reach the trailhead, but it was worth it. Finally, we parked and were on our way. 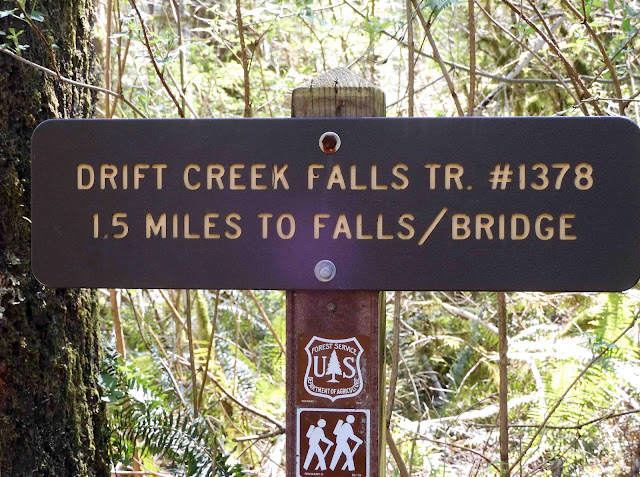 Right away, we noticed the dense forest surrounding us. 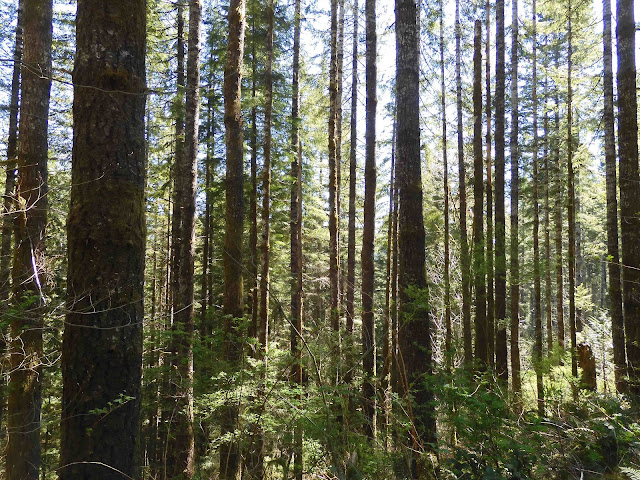 Looking up, we saw this: 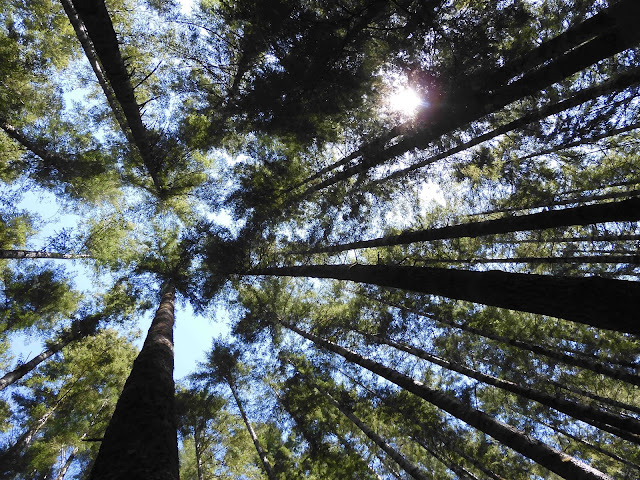 The trail sloped down moderately, but hiking back out (uphill now), wasn't bad. Of course, I took pictures of every blooming thing. Trilliums turn purple when they've been in bloom for a while. As we hiked into the more shaded parts of the forest, they were still white, having bloomed later. 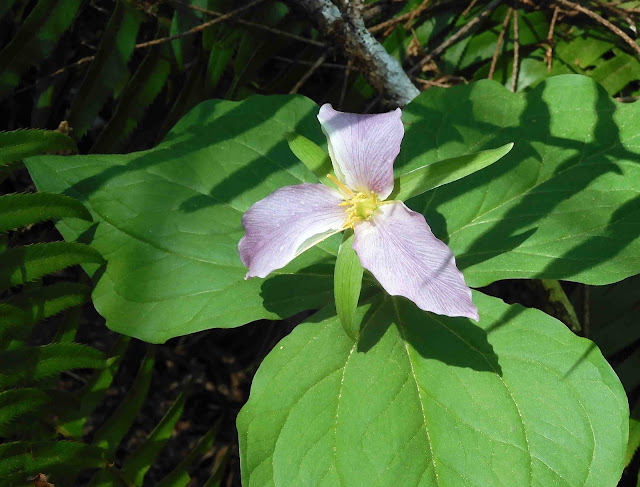 These little yellow violets are ubiquitous, and we have them in our woods too. 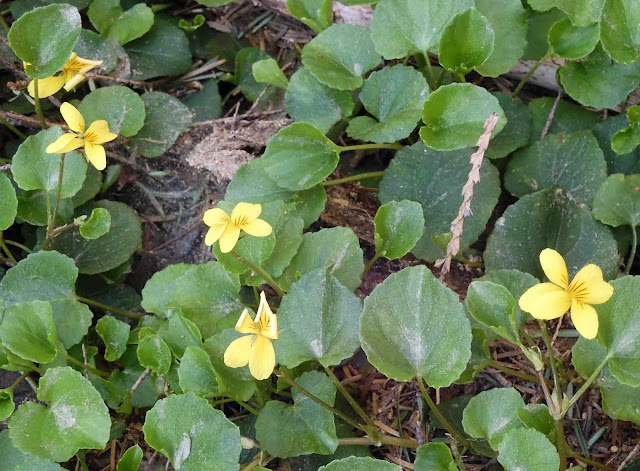 Here's another one that carpeted the area. This one was particularly delightful with its candy stripes. I believe these are anemones. 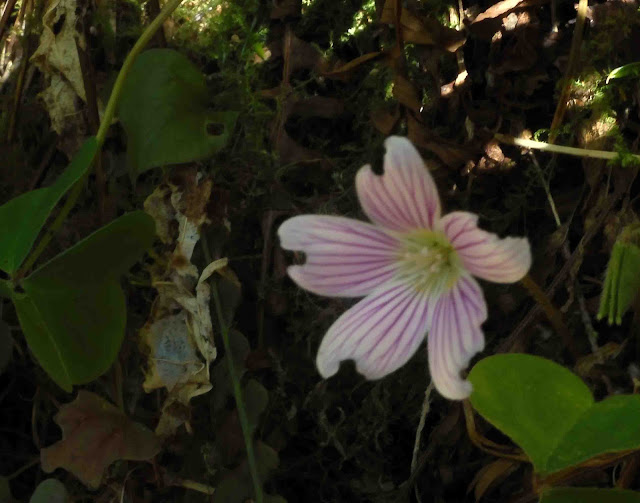 Here is a wild bleeding heart. I don't think I've seen these before. 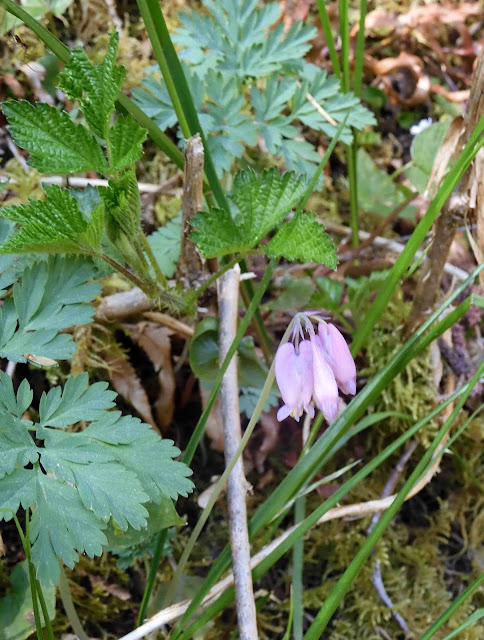 And even though we were following the well-maintained trail, it's always reassuring to find a sign that lets us know we're heading in the right direction. We were heading for the waterfall. 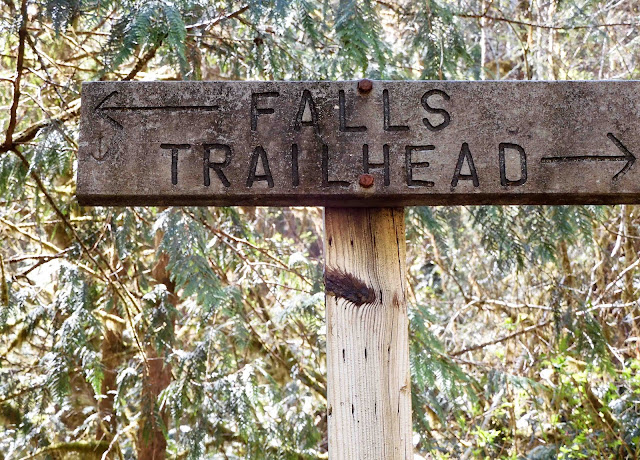 It was an easy mile and a half to reach the suspension bridge. Just before reaching the bridge, we passed over Morgan Creek, which feeds the waterfall into Drift Creek. It was so refreshing to look at, but I suspect that water is icy cold. Here's a video of Morgan Creek. If you can't see the video, click right here.
Just a little farther on, we reached the bridge. 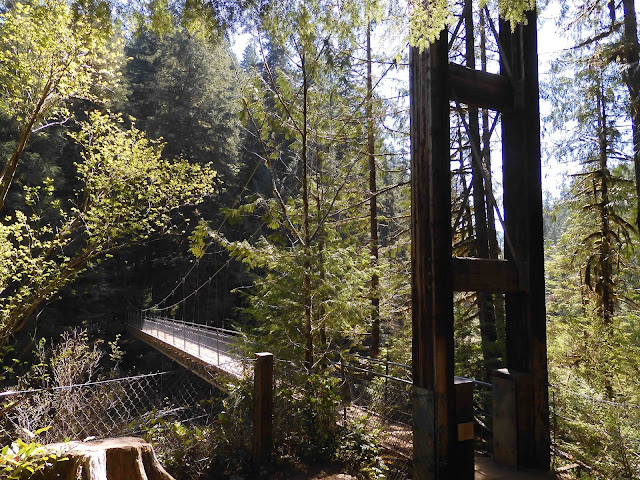 This was the dream of a gentleman by the name of Scott Paul. We already knew he was killed in 1993 in an accident that occurred while he was working on the bridge. Construction was halted for a few years, but then completed later. You can read the article about the bridge construction right here. 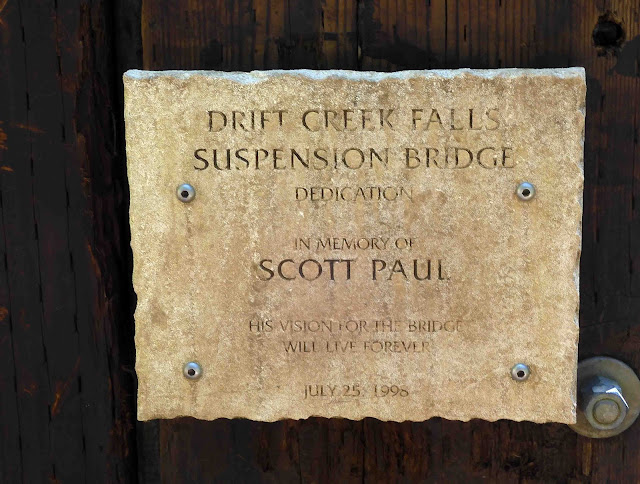 It is the longest suspension trail bridge in any national forest in Oregon and Washington, and it was impressive. 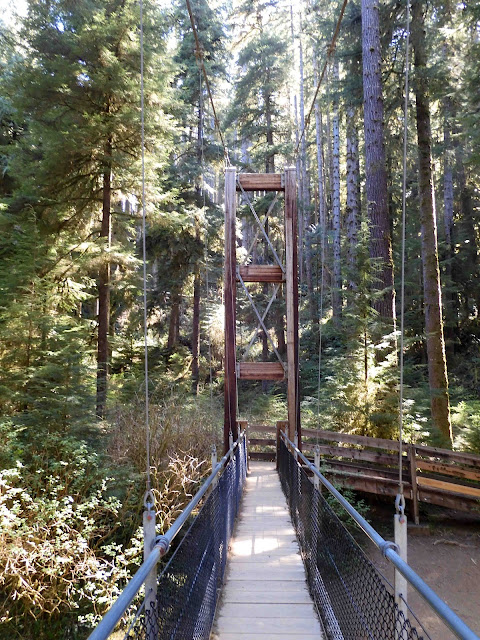 Walking across, we had a good view of Drift Creek Falls. 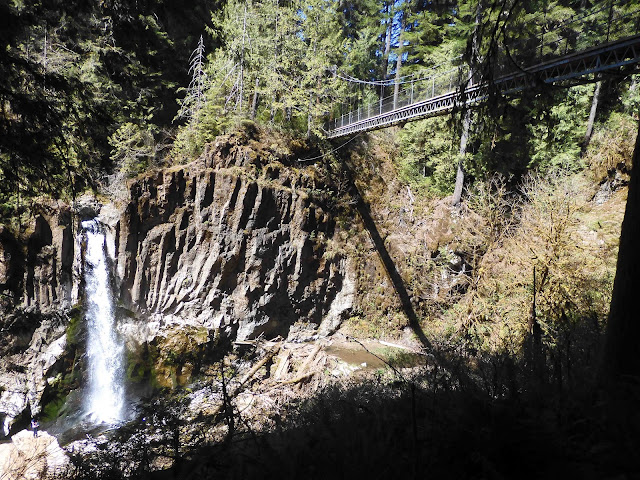 Water pictures are always best viewed in video, and so here's a video of the waterfall. It plunges 75 feet to Drift Creek below. If you can't see the video, then click right here.
From there, we went back the way we came, and that was the end of our hike. It was well worth all the driving we did to reach the trailhead. Oh yes, and a word to the wise: you don't have to pay a day use fee if you are a senior and hold a National Parks Pass. Oh well. Consider our $5 a contribution to the effort.
Okay, so back home yesterday, I finally got to work on piecing together the I Believe in Snowmen quilt. If you remember, the embroidered blocks are all finished, but I have several pieced blocks to make before I can sew it into a quilt. Here's the picture from he pattern cover: 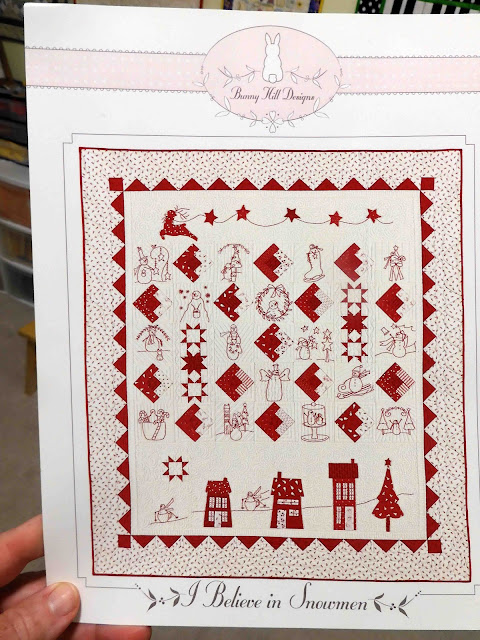 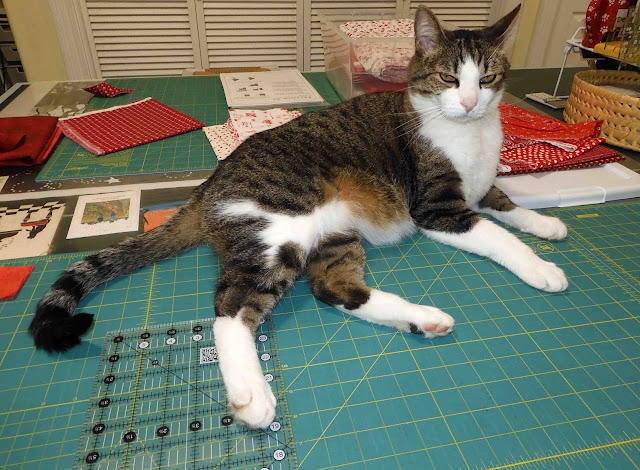 Sadie was more interested in the embroidered snowmen.
Mmm, mmm, mmm. I do loves me a snowman snow cone. These were purrfectly prepurred. 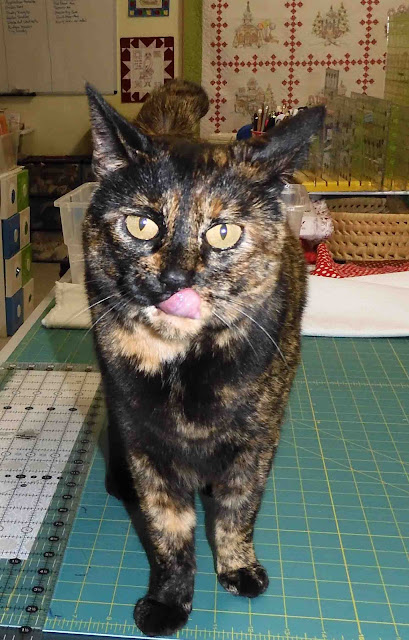 I got as far as the cutting. Since these are set on point, I needed to cut corners for them. I misread the directions and cut all my squares to 4-1/2 inches, rather than the 4-1/4 inches they need to be. (It could have been worse if I'd done the error the other way round.) So when I left off yesterday, I was busy cutting a quarter inch off two sides of each little square, and then cutting them into half square triangles. Doing them four at a time, it shouldn't take too long. 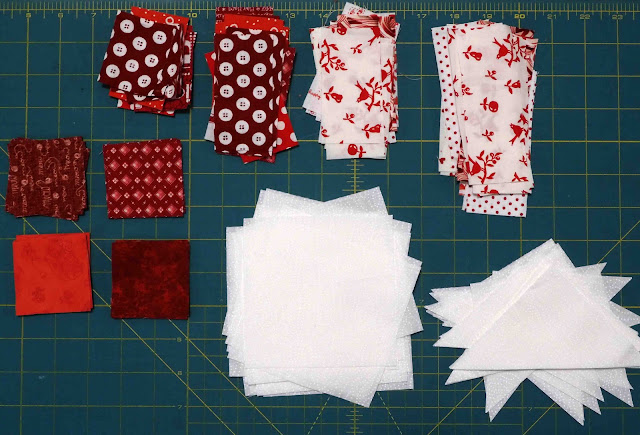 As I mentioned earlier, it's a busy day today with a packed schedule. I'm doubtful I'll get any more done on this today, but no worries. I've already designated tomorrow as an NBS day...only it'll be an NBS day with a side of laundry. Tomorrow I'll tell you about our quilt shop visit. I found the cutest pattern there. It's one of those patterns that makes me want to sweep everything off my work table and start on it right away!
Posted by Barbara at 6:31 AM

There are no shortcuts to any place worth going. ~ Beverly Sills

Ah, you make me miss the boys' scouting days. Hikes, hidden treasures to explore, photos of all things nature, etc.. Moe assited with the first set of borders - quilt one done. That got boring, so he's napping on the couch and I'm on lunch break.

What an amazing hike. Thanks for the reminder about your Bucket List envelopes. I definitely need to start such a list and this hike will certainly be added. I love hikes thru forests, especially when there is a creek. But to get a beautiful waterfall and a suspension bridge added to the hike, is awesome. I hope all goes smoothly with your 2nd shot.

Awesome hike photos. Hope no side effects from 2nd shot. My 2nd one laid me low for a while.

So glad that cutting snaffu requires trimming and not finding substitute fabric. Smitty looks like he's posing for a hunky cat calendar :-) That hike looks like it was lovely. All those high trees! And then wine tasting - it sounds like a great day!