Returning to Life as We Know It

The RV is unpacked, and life at the Three Cats Ranch can resume where we left off. And where we left off was way behind after breaking my shoulder back in December. Mike was a good nurse and a huge help in those first several weeks when I was fairly well incapacitated. Now, there's plenty to do to catch up from where things left off. For one thing, not a lick of housework has taken place in all that time, and so I'll be getting back to that in the next couple of days.

Today would have been an NBS day, but it turns out it will be a MSD (Mostly Sewing Day). There is a mountain of laundry needing my attention, and I didn't get those blooming weeds pulled. I'm hoping they haven't gone to seed in the last couple of days. Also...it's Pi Day, and I simply must make a pie to celebrate. And let's see...anything else? I can't think of anything, so let the laundry and sewing and weeding and baking begin!

As for yesterday, unpacking was the activity of the day. But I interspersed the work with plenty of breaks and finished up the Liberty Sampler embroidery. I'll be adding a border and a binding to this and turning it into a little wall-hanging. The embroidery pattern is from Kathy Schmitz. 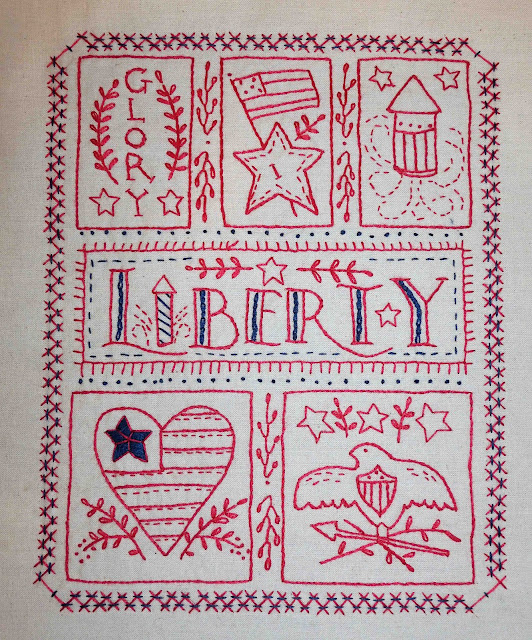 Now I'm without anything to stitch, and so I'll be making up the next blocks for the "Posies" quilt. They won't take long, but each has a little bit of applique that has to be finished before I can do the hand-stitching. After that, I'll need to make up the next block for Dancing Chickens and Flying Pigs, and it also includes applique ahead of hand-stitching. Here's where I left that many moons ago: 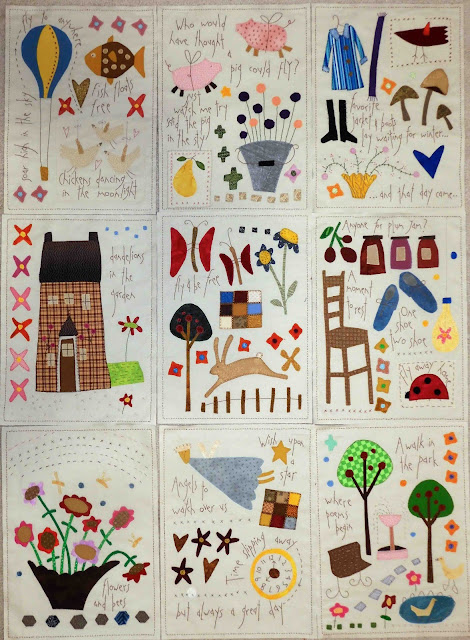 Three blocks to go before it's ready to be sewn together.
In my unpacking adventures yesterday, I added two refrigerator magnets to my little collection. Also, I thought you might enjoy seeing all of them together. This refrigerator is in the laundry room off the kitchen. I think of it as my "cold pantry." 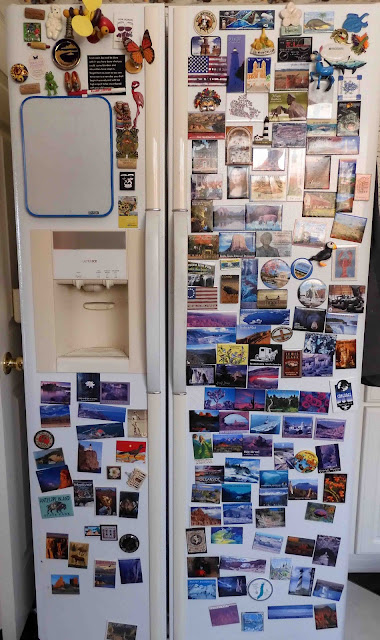 Yeah...we might have to add another refrigerator if we keep traveling. There's still some room at the bottom, and I can get rid of that little white board. I used to keep a shopping list there, but modern apps have rendered it obsolete.
The kitties seem to have gotten their hunting legs under them. They seemed a little disoriented the day we arrived home, but yesterday they were pretty much back to normal. It was so nice to come home to several days of good weather. Unpacking was easier, and the kitties had plenty of time to run around and play. Like the rest of us, they've put on a few pounds in these COVID times and with traveling. It's good for them to get out and get some exercise. Those pounds always melt away pretty fast for for our feline family. (Awesome alliteration.) 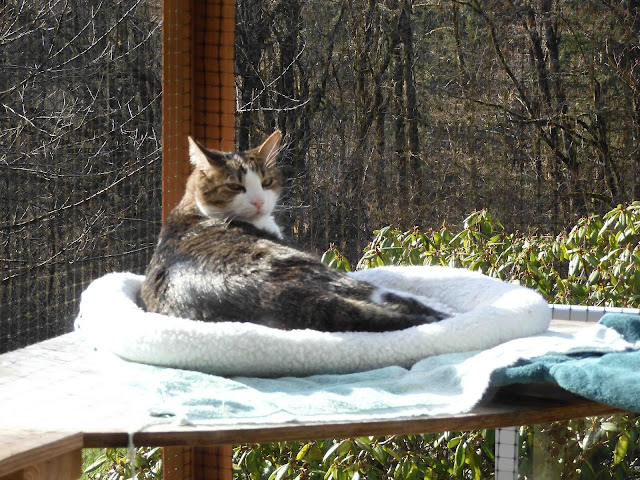 I've had plenty of time to think about my sewing. I'll spend the rest of March getting reorganized and back on track. There are several mini quilts that need borders and backs, not to mention the Charm Stars quilt that was finished on the road. I went rooting around in my stash last night to see if I could find a backing large enough. I found one, and it's one of the oldest fabrics in my stash. It'll be good to get it made up into something after lounging in the sewing room for so many years. 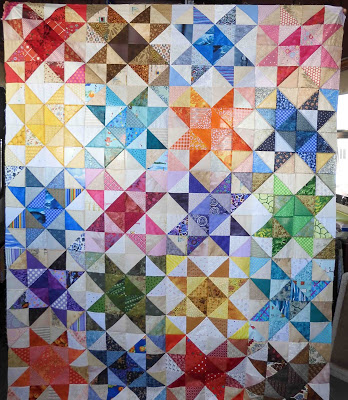 High on the list is to get going on the next Endeavourers challenge quilt for the prompt "color theory." I've gone many different directions with that prompt, but I believe I'm settled on what I want to do.
Also, you might remember (or maybe I never told you) that the Sundress quilt was laid out to allow the wrinkles to relax out of it. This was on December's list to be quilted. But December's list was short-lived since my bike accident was on December 4th. After that, everything came to a screeching halt. Only, no screeching...it was more a dull thud with a loud crack. Anyway...Sundress is still relaxing where I left it many moons ago. It's time is coming very soon. 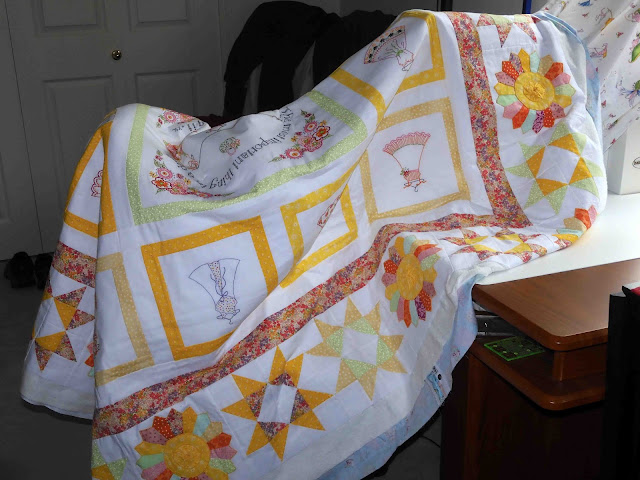 One other thing that came to a screeching halt was the diet we were on at the time. We were making good progress on our diets, but then Mike had to take over the cooking. Calorie-counting went straight out the window, and we went into non-cook cooking survival mode. This week, I added a few winter favorites to the menu, and we'll eat some of the things we missed out on when the real cook took a vacation from all responsibility. So, we'll get back on track with that again soon...right after we eat all our favorites. Then, we can get back to dieting without feeling deprived. Much.
Today, I'll get out and pull up those weeds. Rain is coming, and so there's no time to waste. Then, I'll get the laundry going, bake my pie, and head into the sewing room. There's plenty to do there, and I'm hoping to have plenty to show you tomorrow on Vaccine Day. Full Spring Ahead!
Posted by Barbara at 9:13 AM

Life doesn’t get easier or more forgiving, we get stronger and more resilient. ~ Steve Maraboli

Goodness your magnet covered fridge is great, how nice it must be to glance back at the places you have traveled. Sure hope the weed pulling goes smoothly for you and that your pie comes out of the oven perfect.

It is fantastic to get your independence back and to be able to do regular things. A good thing your hubby could cook and take charge when life called for it. You made memories and now you get to cherish them anew, every time you open the fridge doors.

You have a lot to catch up on, but great you get to sew today. Lovely projects you have going! I need to start getting out in the garden, I have weeds all over the place. I have no excuse either as it was mostly all 70's last week, in between the drizzle! Hope you have a great week!

I love the chickens and pigs quilt! Glad you are able to stitch while recovering from the shoulder. Ouch!!

Dancing chickens and flying pigs is just adorable! Shoulder injuries are rough. Glad your back to stitiching!

I do so enjoy reading your blog posts!

Nice that you can get back into the swing of things...so many nice quilts in the wings to work on...very windy and cold here today...even some snow flurries...I am SO ready for Spring...hugs, Julierose

Tomorrow is my vaccination day for my second shot. This one might hurt a little more. You have so much progress healing from your fall. Good Job!!!! Glad you are home again, that's always a good feeling. Love seeing all the handiwork you did on your trip, wish I could do better at mine. Waiting for new glasses after my cataract surgery 3 weeks ago. Enjoy sewing the day away!

So many things finished or waiting to be finished. Maybe you need to install a special wall for all of those magnets. I had a 'diet' called listeria - fresh packed green beans from grocery. Oh not good!

Wow! You going back into "normal" mode caught me by surprise. I kept thinking the recovery phase was still going. Hurrah for you. I’m looking forward to you working on your projects and putting your house and life back in order. It is such a satisfying accomplishment when it has been so long. To be in control of your life and not have life control your actions gives you independence.

Our spring weather has taken a break today; we are having ice and now snow. Just got back from an appointment and happy to be home and not having to be on the roads any more today. Glad you are all settling in back home. Happy Vaccine Day!

Calorie counting and cooking are hard to do. I'm very limited in how many calories I can have a day. Good luck with your diet.

How is your shoulder healing... will you be having a check up to let you know the prognosis?