Today we awakened to this: 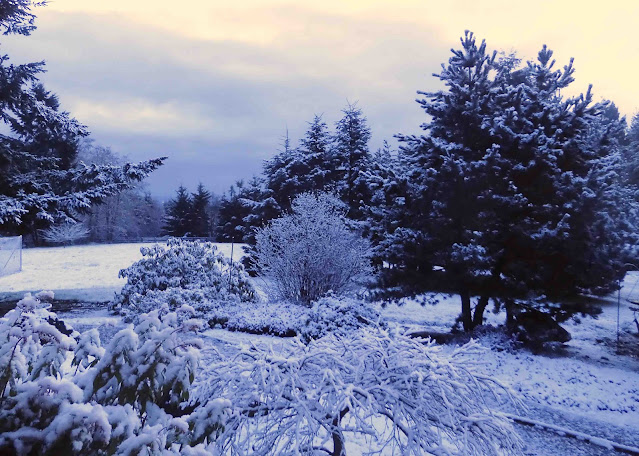 Well, that's annoying. This morning, I have my first physical therapy appointment. It's warming quickly, and so I imagine the snow will be melted before I need to leave. It's a good thing because I'd relish an excuse to cancel and forget the whole thing.

My spate of self-injury continues. Yesterday I managed to slice open a finger with my rotary cutter. No worries. It wasn't a deep cut, but you'd have thought a murder had taken place, given all the blood. It bled and bled and bled. I could barely get a band-aid unwrapped to get it covered without bleeding all over everything. Finally I wrapped it tightly in two band-aids and then went back to my sewing. When my fingertip turned black from having the circulation cut off, I tried again to put a fresh band-aid on it. It was still bleeding. Good grief. The only thing missing from the whole scene was the arterial spray. I'm still alive this morning, and so I think maybe I'll survive yet another mishap.

If you were born during he 14th Century, like I was, you might remember back in the 70's when we were all focused on our "biorhythms." And if you're too young to remember biorhythms, here's what Wikipedia had to say about it:

The biorhythm theory is the pseudoscientific idea that our daily lives are significantly affected by rhythmic cycles with periods of exactly 23, 28 and 33 days, typically a 23-day physical cycle, a 28-day emotional cycle, and a 33-day intellectual cycle. The idea was developed by Wilhelm Fliess in the late 19th century, and was popularized in the United States in late 1970s. The proposal has been independently tested and, consistently, no validity for it has been found.

If you're curious about this, you can calculate your own biorhythms right here. I calculated mine for both yesterday and the day I crashed on my bike. In both cases, I was at "high" physical ability days. Hmmph. So much for that "science."

So what was I doing when mayhem broke loose? Well, I was making a cat. It's not the first time I've been bitten by a cat. I was cutting the pieces for the next Ties & Tails block. I started first with one fabric for the cat, but then realized I didn't have enough to cut the pieces I needed. So, I started over. I was probably in a hurry to catch up to where I'd left off, and that caused me to be careless with my handling of the rotary cutter. Indomitable quilter that I am, I managed to make the rest of the cat without further injury.

First I made the cat's head and added his three-dimensional collar. The collar instructions are a little confusing. This is the third one I've done, and so I think I have it down now. 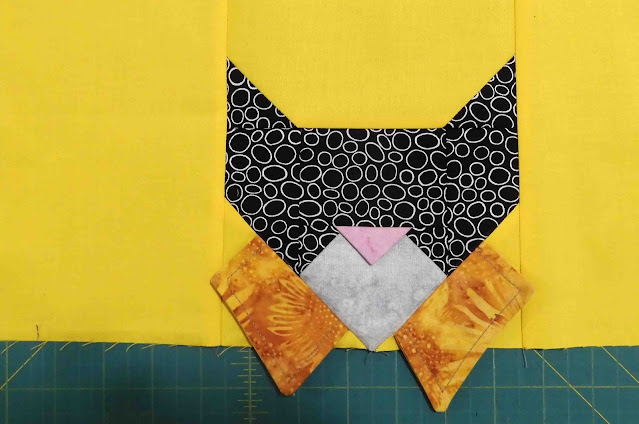 From there, I paper-pieced the tie.

And then I sewed the rest of the cat's body around the tie. This one is reversed from the one I made previously. 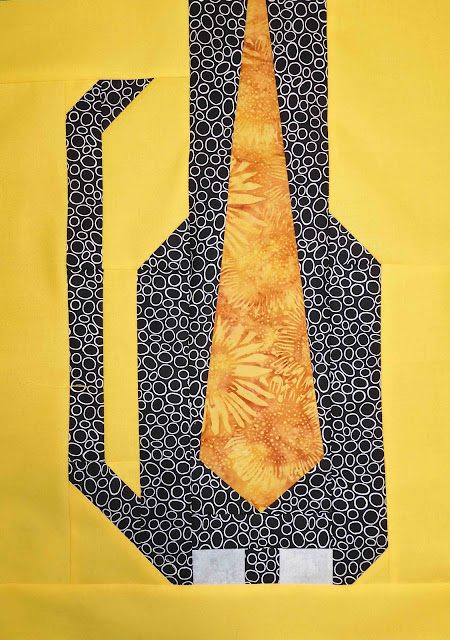 From there, I needed to sew the top and bottom together. About the time I was finishing that, my little furry helper showed up. 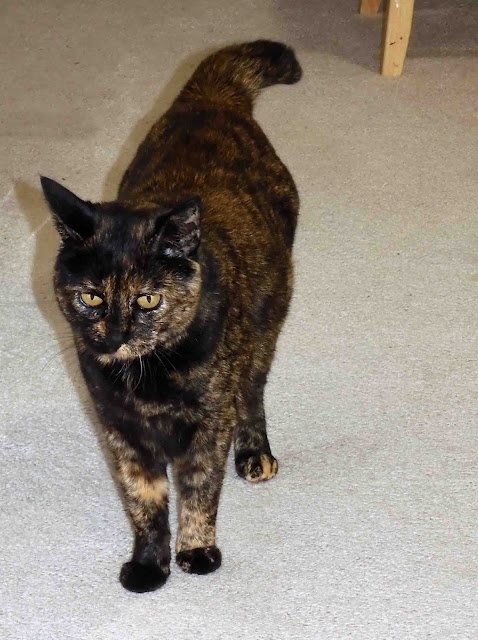 Purrhaps you would like some help with this cat. Allow me...
I had the head sewn to the body, and I was trying to take its picture. Excuse me...could you just...I wonder if you could... 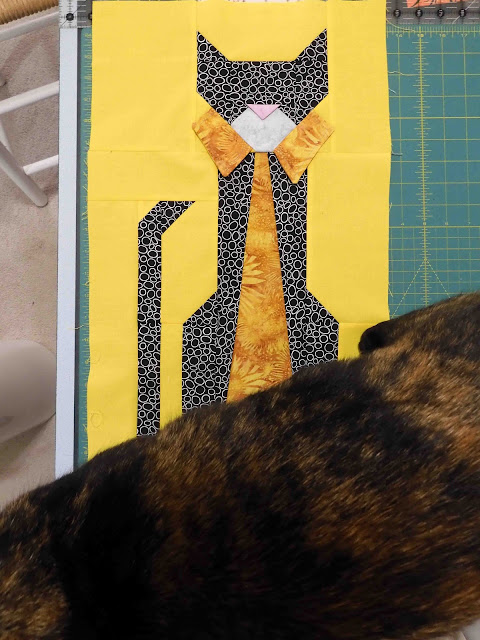 Okay, there we go. Cute, huh? I like that black and white fabric. It's probably just as well I didn't have enough of the other. 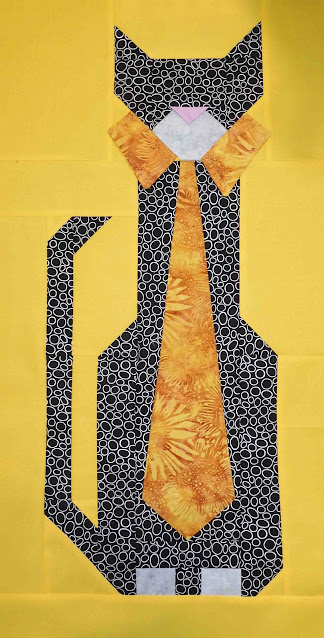 If there's time for sewing today, I'll add in the details. There are appliqued eyes, embroidered mouth and whiskers, and then some buttons sewn to the collar for a button-down look. When that's all finished, I'll add a narrow black flange. Also, I'll need to add some red squares to the right side, and those will serve as a sashing when the whole thing is sewn together.
The only other sewing I did yesterday was to finish stitching in the leaves on the Heartland Barns piece. 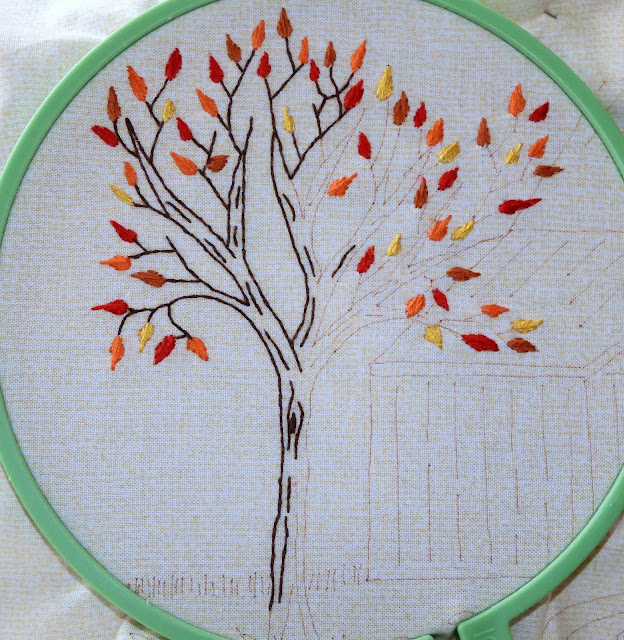 Now, I just need to finish stitching the trunk and branches.
Okay, so that was my day. As I mentioned, I have physical therapy this morning, and then I'll run a couple of errands before returning home. I should have some time to finish up the cat this afternoon. How's your Monday going so far? Whatever you do, be careful out there. Quilting is bloodsport and not for the faint of heart.
Posted by Barbara at 7:25 AM

The cat is adorable and a blood sacrifice seems only fitting. I hope the PT goes well, which is to say, I hope you get out of there without too much sadism on their part.

Well my biorhytmn--according to that calculator-- is at an all-time low in all three segments!! Yikes--I am not surprised, as this day didn't have an auspicious beginning--hardly able to sleep last night--just fidgety and antsy and brain whirring....

Anyhoo--
I love your tuxedo kitty --so cute...sorry about your mishap--rotary cuts are deeper than they seem sometimes--ouch!!

Geez. Do you have some underlying love of pain? Sounds like your cut by rotary cutter is worse than I've ever done. Wow. Stay away from sharp objects and bicycles for awhile. BTW - Cute cat project!

Oh no! Glad your cut wasn't bad but just really bloody. Ugh to more snow. Spring was on its way here in Ohio, but there is snow in the forecast the next two days. LOVE the 3D cat block. The color you used for your cat is purrfect!

It's sometimes surprising just how blood comes out after a mishap. Perhaps you should have retired with a cup of tea and a lie down after that nasty little accident. Hope your appointment went well.

Resilience! I think you are just part Evil Kenevil. Stop It These kitties are almost as cute as the real ones.

Finger tip cuts are difficult because it's hard to get a pressure bandage on, especially one handed. About 4 years ago I had a nasty accident with a new potato peeler late at night. The next day I went to a local drop in clinic to have it checked. It was re-bandaged with what was to me a miracle product. No idea what it was, it hardened on the fingertip and I was told it would drop off when the finger was healed, which it did.
Maybe your local pharmacist could provide the product or information. It was a blessing to me, even though I didn't appreciate the 2 $170 bills I received (medic services and facilities fee).

I have yet to cut myself with a rotary, but I have sliced off part of a finger with a brand-new chef's knife. I'll spare you the details, but I agree with you about the amount of blood. Oy. Glad you didn't get any on the fabric (all important thing, you know) and glad you are okay, despite having a tender finger. That cat block is really cute - I love the black and white fabric!

I had that heavy pit in my stomach when I saw the title. Then said, no, it’s about having a Bloody Mary and a nice day. You know, cocktails on the deck and a bright sunny day. Wrong on both account. Heal fast.