It was another windy day yesterday, although not as bad as the previous day. My first task of the day was to stitch the morning's inchy. I did mine a little differently than Meg Hawkey did hers, but it's pretty close to the original. 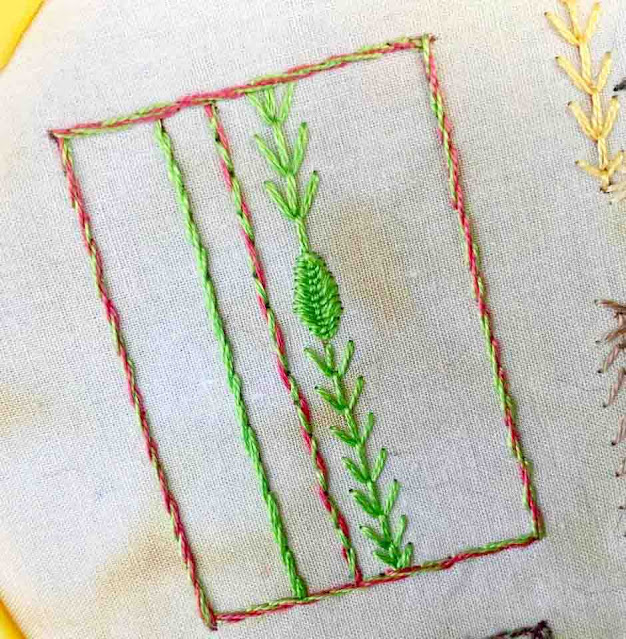 I trust y'all had a nice Valentine's Day regardless of how you spent it. We had a quiet dinner at the RV...steaks and baked potatoes, and a really nice bottle of 2014 Witness Tree pinot noir. We liked the wine so much we bought a case several years ago. We have just one unopened bottle left, and now even the winery is history. Sigh.
For dessert, I tried this new apple crisp recipe. It was a little disappointing. 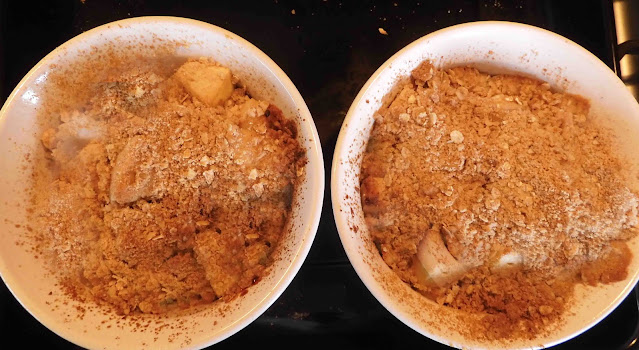 I didn't have the right dishes to use for baking, nor the right oatmeal. I was supposed to use "old-fashioned" oats, and I had only "quick cooking." We had it anyway, with a scoop of vanilla ice cream, which rounded out the rough parts.  And here's the thing, I wasn't thinking, and I used two Granny Smith apples for this. Granny Smiths add a nice tartness, but you really need to add in a better cooking apple like a McIntosh, or a Gala, or a Gravenstein, or something that will produce some moisture. So, I'm not linking to the recipe that I used, but I'll try again eventually.
While that was baking, I stitched my limit on the redwork piece. 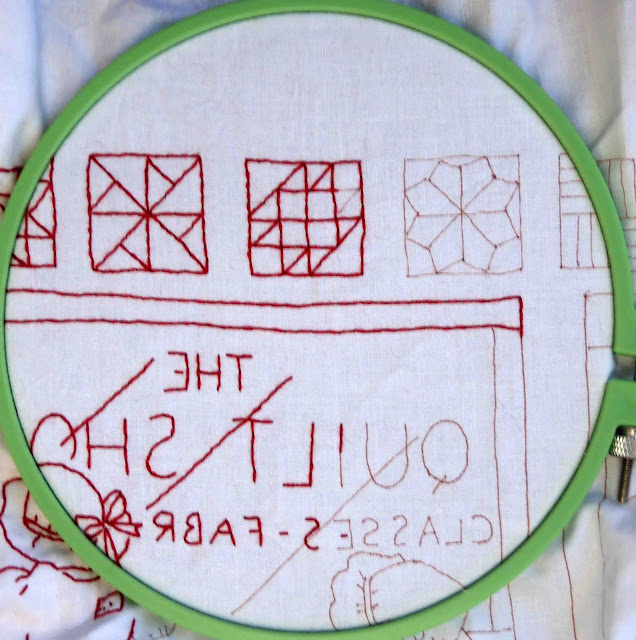 By then, I'd stitched enough to move the hoop to the right to capture the whole piece to the right-side edge. This section will stitch up quickly, and I'm seeing the light at the end of the tunnel. 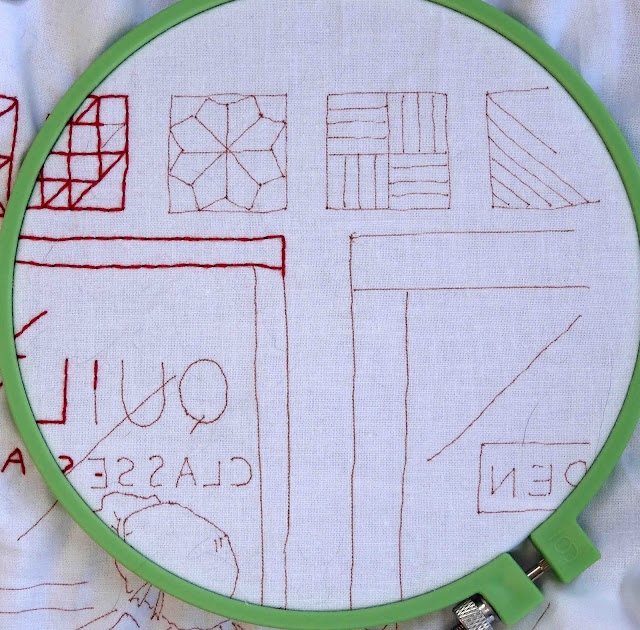 Probably I'll make a little wall-hanging from this, but it occurred to me it might make a good addition to my current Shop Hop quilt. I haven't given this much thought, and so I'm not sure how to make it work. It's just a thought. Or maybe I'll set it aside for the *next* Shop Hop quilt. 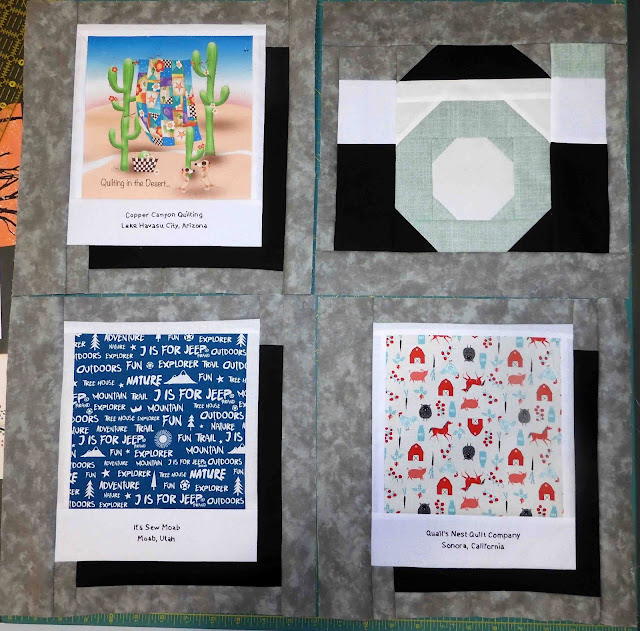 So later in the afternoon, we walked over to a "water hazard" on a nearby golf course where there are plenty of ducks and coots hanging out. 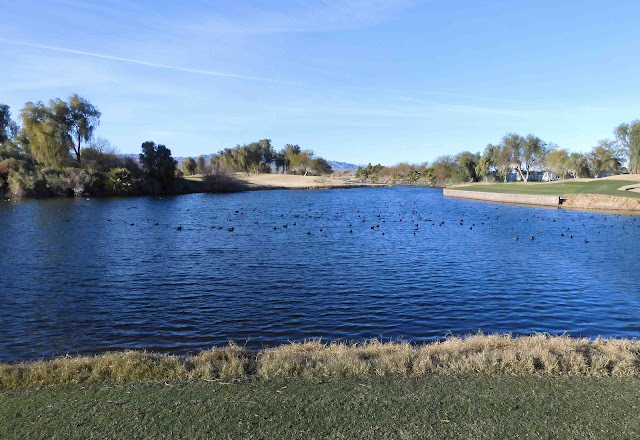 The coots were all on dry land, and I really wanted to get close enough to see their feet. 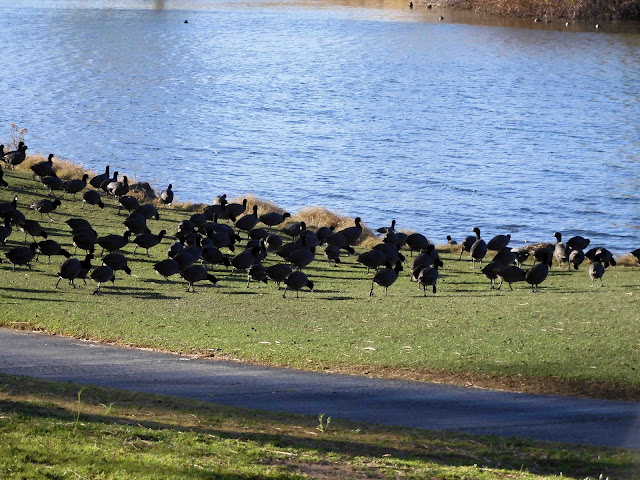 Even though we were still quite a distance away, they grew nervous almost as soon as they saw us. 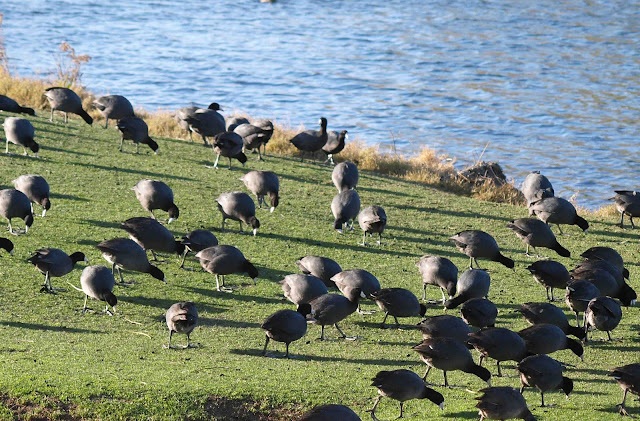 They hopped off into the pond and swam to the other side. 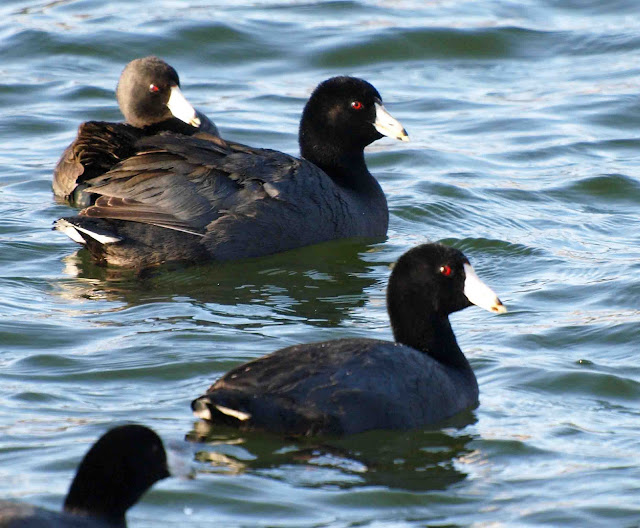 Apparently, they aren't entertaining any guests this evening. It was a little like knocking on someone's door and having a voice from inside yell, "There's nobody home!" 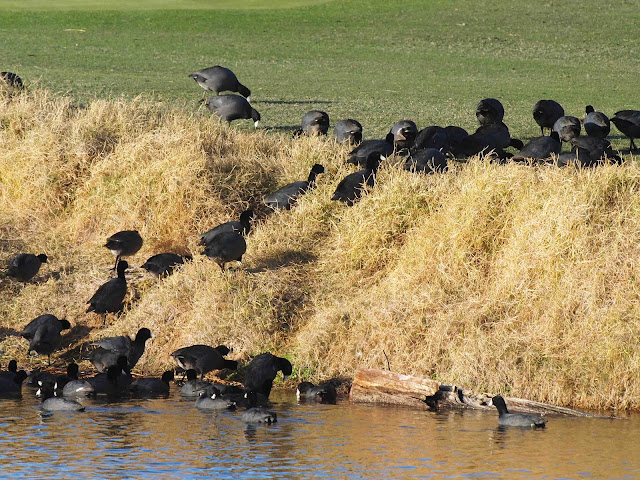 As a reminder, they have the most interesting lobed feet that make it possible for them to walk on marshy land. Here's an image I captured of one at the Whitewater Preserve last year. 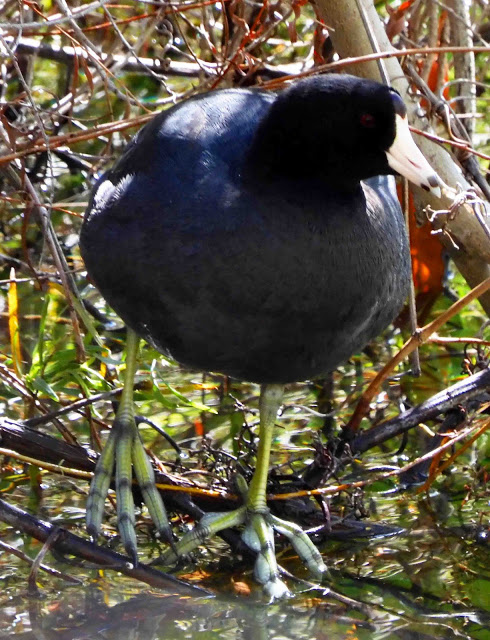 Okay, but moving back to yesterday, I caught this Eurasian Collared Dove on a nearby tree. 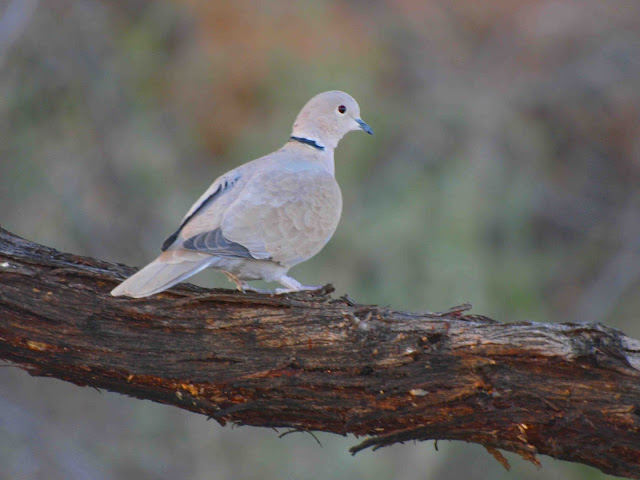 Okay, so you might remember that I made some placemats for the RV a while back. They were never very satisfactory as placemats. They were too wide, and had to overlap just slightly on our small table. Also, they made taller glasses a little tippy, and so we abandoned them. The kitties think they make purrfect purrsonal sized quilts. The humans in the RV appreciate that they create a protective shield between human skin and kneading kitty claws. Sadie likes this one on my lap. 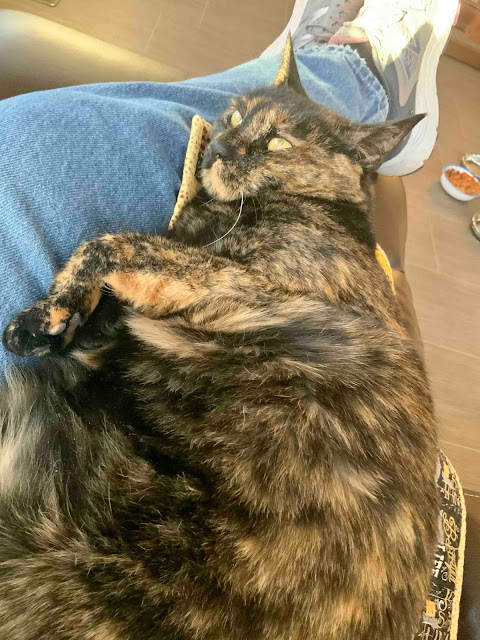 Smitty is happy to sit beside me. 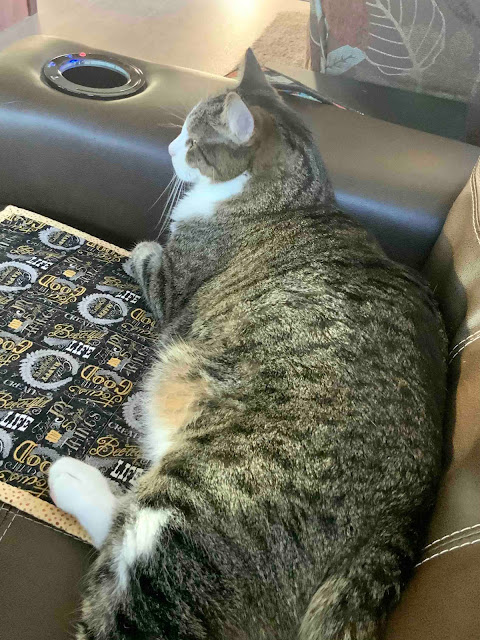 There was a pretty sunset last night. The land is flat, which makes the sunsets and sunrises big. They cover the whole sky. Looking in one direction, we saw this: 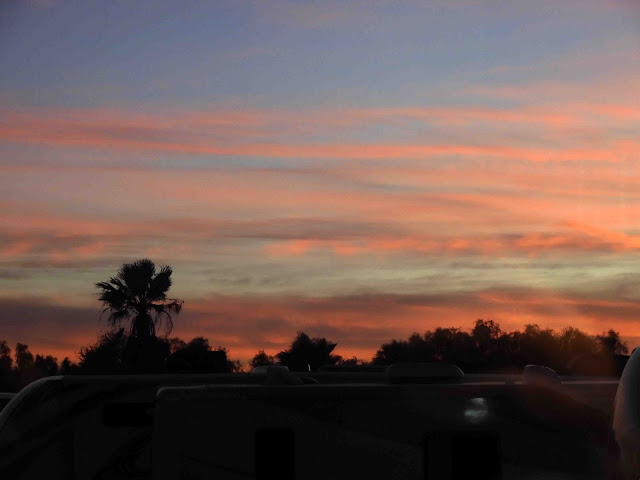 Looking to the west, we saw this. There were lots of jet trails in the sky, coming out of Las Vegas, we presume. 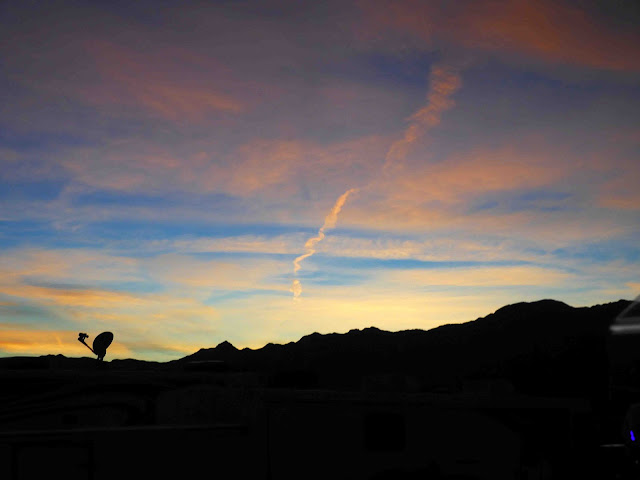 This morning's sunrise was no slouch either. 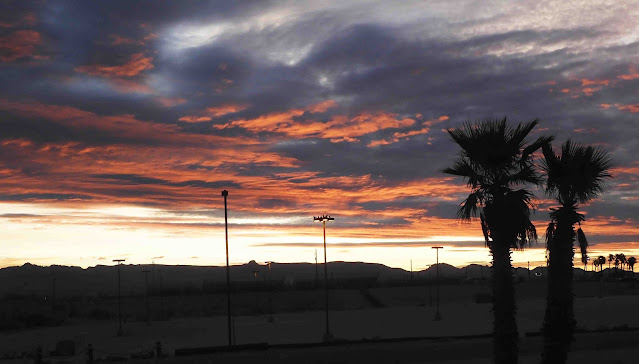 Okay, so I meant to post this video yesterday, but then I forgot. This is Mike's drone footage from our hike at Redstone Dunes. It gives you a good idea of the landscape. If you can't see the video, then click right here.
This morning's inchy has been posted, and so that's where I'll head next. Our plan is to head over to Oatman, Arizona, tomorrow. I mentioned it in an earlier post. It's a ghost town with wild burros running around. The weather will be nice tomorrow, and the three-day weekenders will, hopefully, have gone home by then. As for today, nothing but stitching on the horizon. Possibly, I'll do some cutting for my next mini.
Posted by Barbara at 9:22 AM

There's no pleasure in getting to be an old coot unless you have some fun along the way. ~ Gary D. Schmidt

I've never seen a coot (well a few old coots live nearby, but not quite the same as these...lol)...such interesting feet! Beautiful sky photos and a fun video from Mike. The colours in the landscape are amazing.

Great bird photos. Such a shame they are so shy about you peeking at their feet! I love seeing beautiful sunsets too while we are traveling.

I really like today's inchy and more great photos, thank you.

Looks like another relaxing day. Thanks for sharing your beautiful photos. And I really enjoyed Mike's drone video. Beautiful scenery. But I kept looking for a wild burro

Marvelous photos! Did you report your bird sightings on the Bird Count? I've not seen those coots in real life, how fun.

You've had some lovely views during your stay; nothing prettier than a glowing sunset/sunrise. We have coots here, but I've never thought to check out their feet. They are definitely skittish birds. The drone video was pretty cool!

Coot's feet really are amazing. The coots on the pond near use are less shy and will stand near you expecting admiring looks at their feet. Love the sunsets and sunrise and the drone footage is interesting.. Great work on the inchies, unfortunately I am way behind.