Never let it be said that a broken shoulder can stand between a woman and her quilting...not permanently, anyway. I'm happy to say that the Snowflakes quilt top is now a finished flimsy. Ta-Da!!! 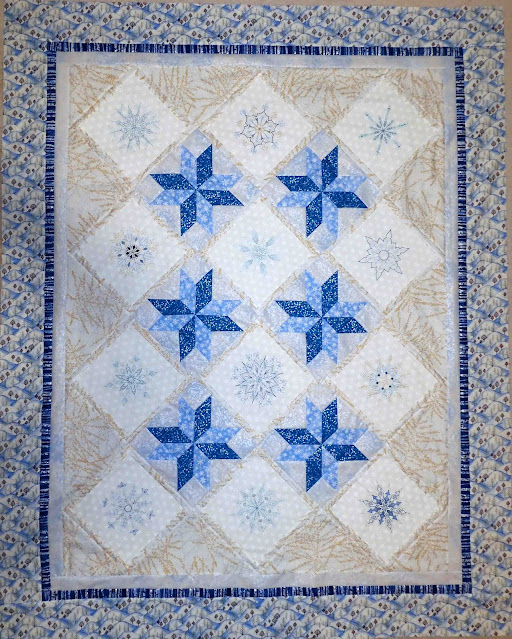 It's as if I hit the stash jackpot with the fabrics. Except for the backing (shown below), all of the fabrics for this quilt came from my stash. Even the embroidered snowflake background fabric was first used in the Snow Globes quilt.
After sewing on the third border, I had just one more seam left to sew to make a back for it. Now, it will go on the quilts-to-be-quilted pile, and I expect it will be finished sometime later this year. (It will get done faster if we actually hold our Oregon State Fair this year. Last year's fair was canceled.) 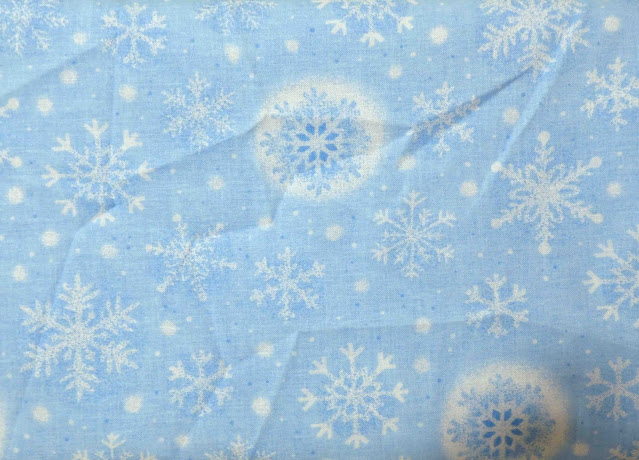 Of course, nothing happens in the sewing room without the help of my trusty cat. He held the top and bottom borders down while I sewed the side borders to the quilt top. 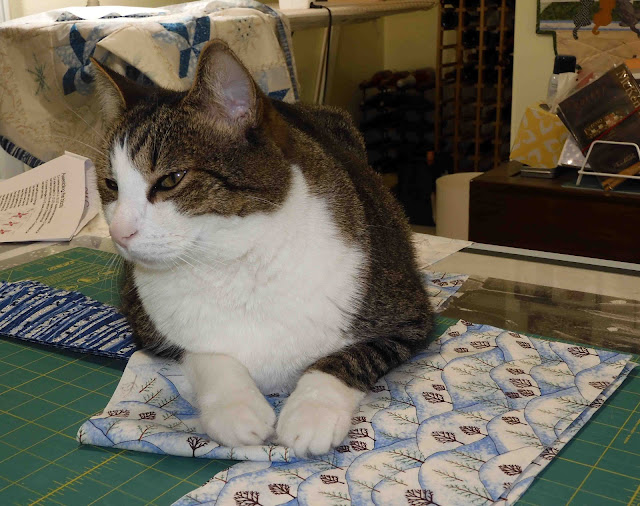 When it was all finished, he gave it a serious once-over before pronouncing it acceptable. 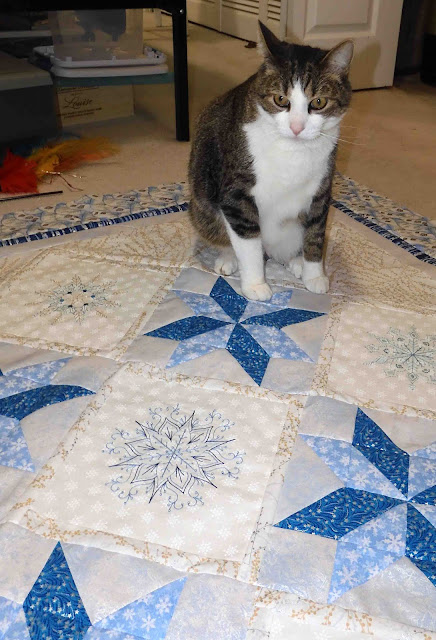 And I'm feeling pretty darned smug because this was my project for both December's and January's OMG, and so I'll be linking up there when the party starts later this month. (Note to self: write a reminder to link up.) 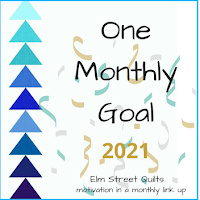 After writing yesterday's post, I went downstairs to see a rare moment of shared lapping. I guess watching the goings on at our Capitol on Wednesday made them decide to give peace a chance. 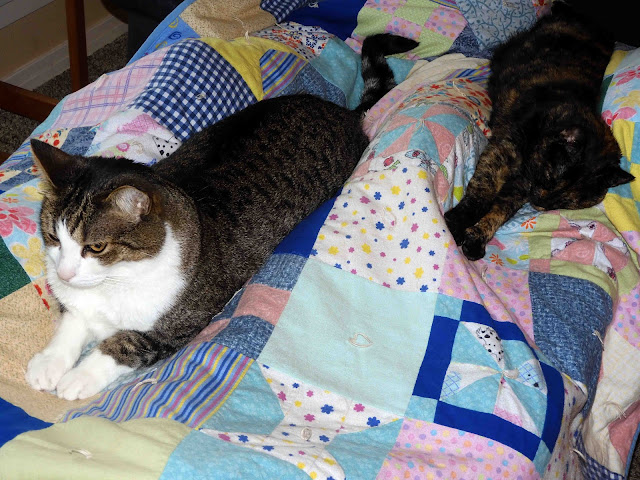 There has been a little more progress on the slow-stitching piece. I'll probably move my hoop when I work on it this morning. 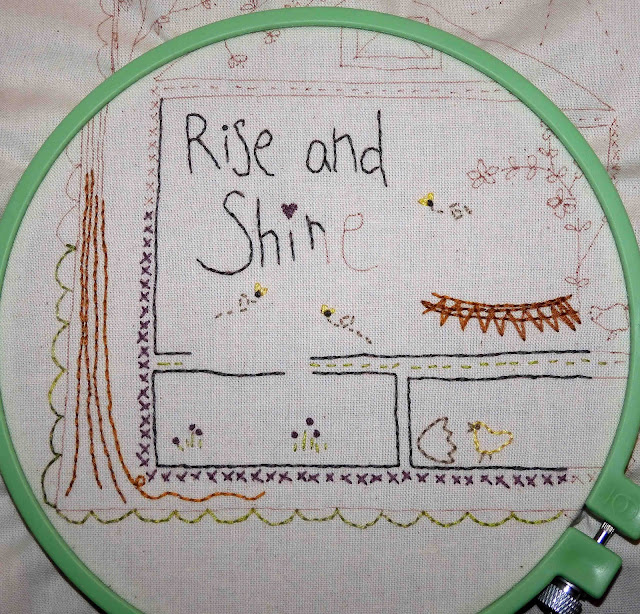 And for the first time in over a month, I made dinner last night. It was still a team effort. Mike helped with some of the chopping and heavy lifting. He peeled and sliced the sweet potatoes and cut the apples into wedges. They were both baked in the oven, and he hefted the cast iron skillet from stovetop to oven for me. It's actually been kind of fun doing these team efforts in the kitchen, but I think he'll be just as glad to let me take over when I'm able to do everything myself. 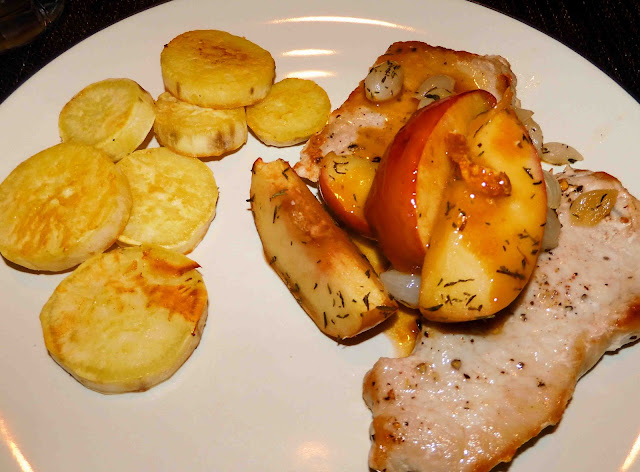 So last night's dinner was nothing special, but if you're interested, we made Pork Chops with Roasted Apples and Onions. This is a recipe from our diet. Speaking of the diet, it's gone completely out the window since my accident. Fortunately, neither of us has gained any weight during this time, but we haven't lost any either.

This dish is made with frozen pearl onions and gala apples sliced into wedges. They're roasted in the oven for about 20 minutes. The pork chops are sliced thin and fried in a skillet, and then a sauce is made from the pan drippings. It's pretty easy and doesn't take a lot of time. The sweet potatoes were just peeled and sliced into coins, then drizzled with olive oil, seasoned with salt and pepper, and roasted in the same 400° oven with the apples and onions. Easy, and it constitutes another little victory on the road to healing.

So today I'll be kitting up some projects to take along on our trip. I've probably traced out enough slow-stitching projects to keep me busy. Also, Meg Hawkey should be publishing instructions for her stitch-along for February's International Embroidery Month soon. I was hoping she'd have done it by now because it's harder for me to make preparations on the road. Last year's project took three tries to get it printed right.

Also, I'm going to pull together fabrics and patterns to make some minis while we're traveling. If I get real energetic, I'll sew the Charm Stars together. 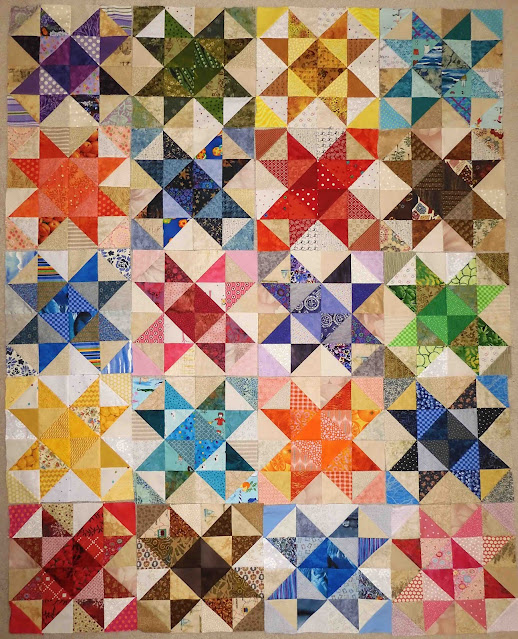 This was one of two Rainbow Scrap Challenge projects I did for the 2019 challenge. (I didn't do one in 2020.) The blocks were finished back in May, but they still need to be sewn together. The original pattern had this with a keyboard border around the outside edge. I'm thinking I'll skip the border. The quilt is large enough as is, and so I'll just add a binding eventually. And all of that to say that I'll be taking these finished blocks along to be sewn together too.

Okay, so there's plenty to keep me busy today, and the next several days are going to be days to start buckling down and getting ready. I'm afraid Mike will be doing most of the work since I still can't lift anything heavier than my coffee cup. He'll be carrying all the loads from the house to the RV.

For now, I'll settle in and get some slow-stitching done. It's a nice slow start to a busy day.

The snowflake flimsy turned out so well--love that gold/white fabric--it really adds so much to the already gorgeous snowflakes...
Your scrappy rainbow stars are really pretty...
Hugs, julierose

Hooray for a finish! You're not letting this broken bone slow you down much and having help in the kitchen is nice no matter the reason. I'm not sure how large the stitching pattern that you're waiting on will be, but I found tracing a pattern right from my computer screen to be do-able for a small project when I had a non-functioning printer. The back-lit nature of the screen acted exactly like a light box, so may be something to consider. But, of course, I have no idea what this project includes, so it may not be useful at all! I'm glad to see the kitties giving peace a chance. Maybe I should review the inspiring footage with my Gabby and Toby, who seem determined to both be terrified of each other but still overly aggressive towards each other. It's an odd mix of behaviors and I hope with time it will lessen. But that's how it goes when you add a new personality to a home...adjustments take time. Have a safe trip!

Your post gives me the opportunity to wonder who decided to call quilt tops "flimsies." After all the work that goes into piecing, I hardly think "flimsy" aptly describes the (almost) finished product. Yours is lovely and to my mind ought to be called what it is -- a finished quilt top.

I'm so pleased you re feeling much stronger now and can take a turn with dinner. Little steps each day. And you have a road trip to look forward too, so that is exciting. I know that packing the caravan or camper means many trips in and out, so you will have to abdicate this duty for this trip. Looking forward to reading about your travels.

Kudos to you! I'm not at all sure I would have been able to manage what you've done if I were dealing with a broken shoulder. It's a beautiful quilt!! Wish the people in power would take a lesson from the peaceful kitties at your house.

Congratulations on your OMG finish even under the circumstances. I look forward to your 'shared' travels - sans bike rides.

Congratulations on finishing your OMG quilt. It's very pretty.

Really like what you have chosen for fabrics for you snowflake top. Gorgeous embroidery.

Look at you, nailing that OMG for December and January. Woohoo! And it's a beauty. I like this one very much. Glad you were able to make the meal too, even if Mike was helping a bit. Really good thing that you can lift your coffee cup, at least - wouldn't want to be without coffee!

I love the finished flimsy. It's good to hear you are feeling able to start doing more. I'm sure the kitties will keep careful watch to make sure you don't over do it. Have you written about your planned route? I know I've missed a few posts due to life getting in the way.

I really like the Charm Stars, but think sewing them together will be a pain (hopefully not literally) since the seams won't nest if they've all been pressed the same way. Good luck with the packing.
Pat

The quilt turned out beautifully! Congratulations on that finish. It will make a wonderfully quilt to see you through the winter months, since it is not "Christmassy".

Congratulations on your OMG finish, it is beautiful. Hope your shoulder heals up quickly! Great stitching project too!

Your have some lovely projects in the works and the Snowflakes quilt is just beautiful. happy Stitching

Congrats on the gorgeous finished flimsy! Hopefully there is a fair this year and you get to enter that quilt, it would do really well. And congrats on the small victories of dinner making and other small improvements. It so frustrating to recover from those type of injuries, glad you've had steady progress.

Lovely snowflakes top, and your RSC stars are fabulous!

Beautiful Quilt! and I really like your inspection team as well.

Pretty! Thanks for linking up with Elm Street Quilts One Monthly Goal and congrats on your finish!

Beautiful projects (and cute cats and yummy food!). My own torn shoulder isn't quite as bad as a broken one but I hear you--not letting it keep me from sewing! Heal soon!