We've never had snow in October...and we don't now. But quilt-wise, anything can happen. I'll say more in a minute. First...here's something we get in abundance in October: Wonderfully woven webs. 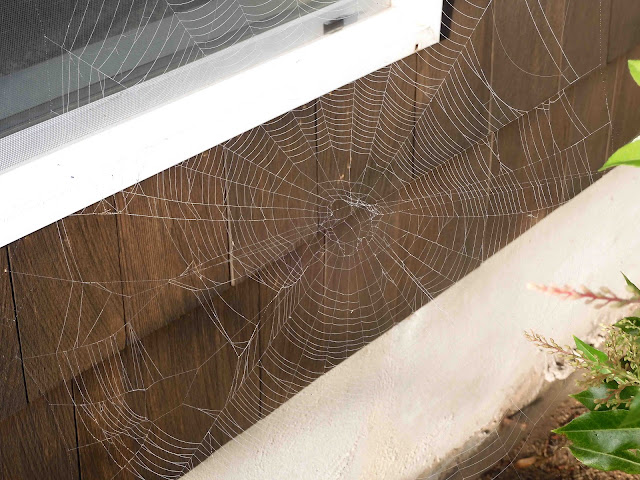 We get lots of big garden spiders this time of year, as I imagine most people do. The web above is about 18 inches in diameter. Fortunately, the spider is smaller. Here's another one...a little harder to see with the clematis in the background. 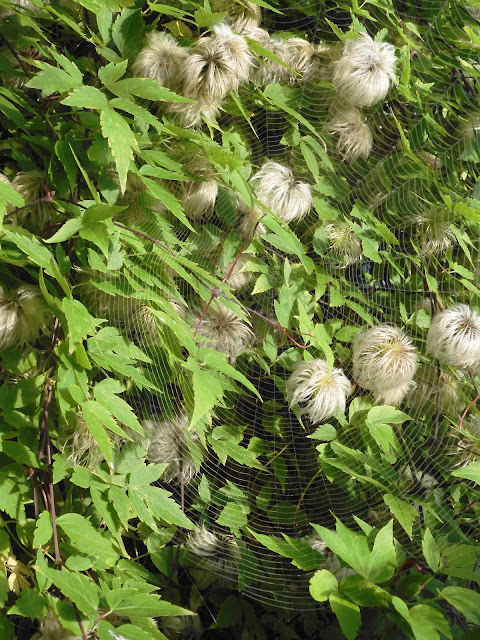 I've been hoping for a photo of these, but there hasn't been enough moisture for them to show up very well. Yesterday's morning brought a nice foggy mist that burned off by afternoon, and we had a pretty nice day of weather.
Back inside, I was getting ready to start quilting the Snow Globes quilt. Here's how the finished quilt top looks. 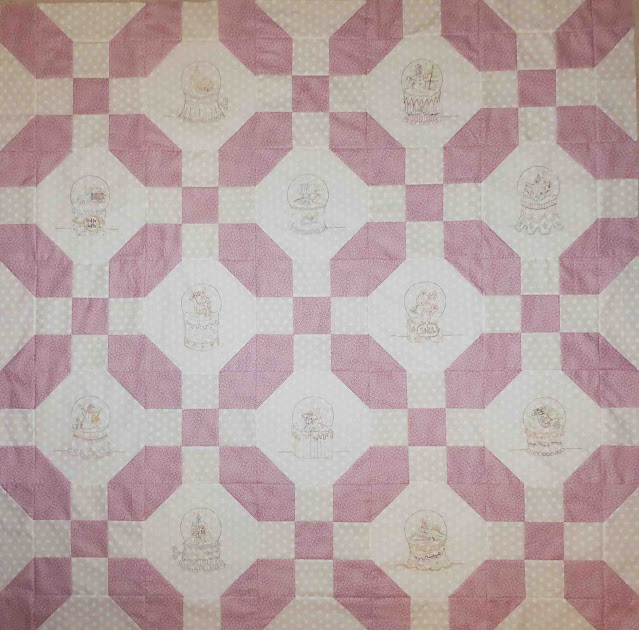 I have in mind to quilt snow in the embroidered blocks, and then some cross-hatching in the 9-patch blocks. But first, I needed to attend to a conversation with my cat. Excuse me for just a minute...
Whatcha' doing? Quilting? 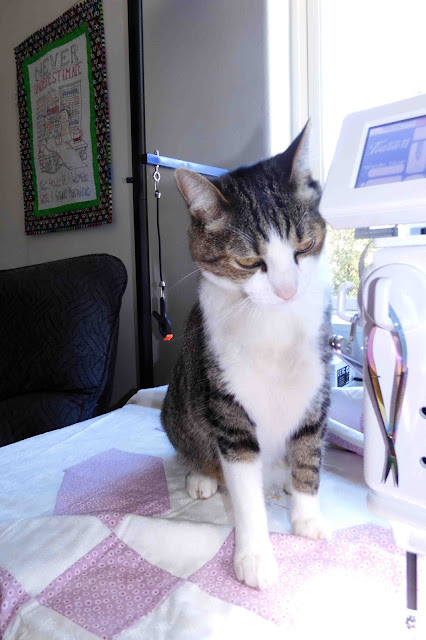 Did you know that this sewing meowchine makes a purrfect tool for cheek scratching? I'm surpurrised you don't use it that way. 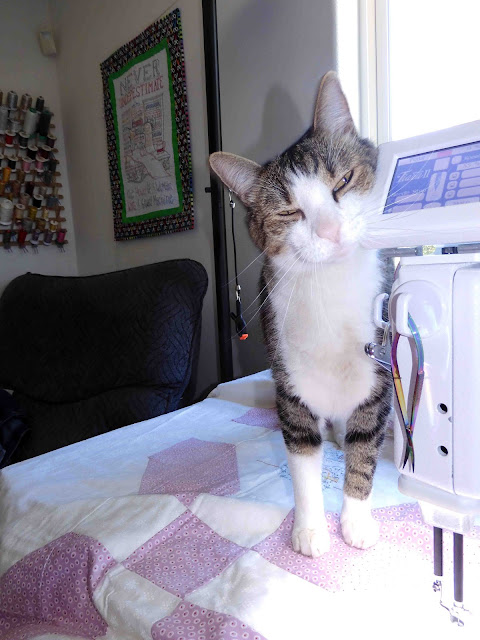 It works on chins too. 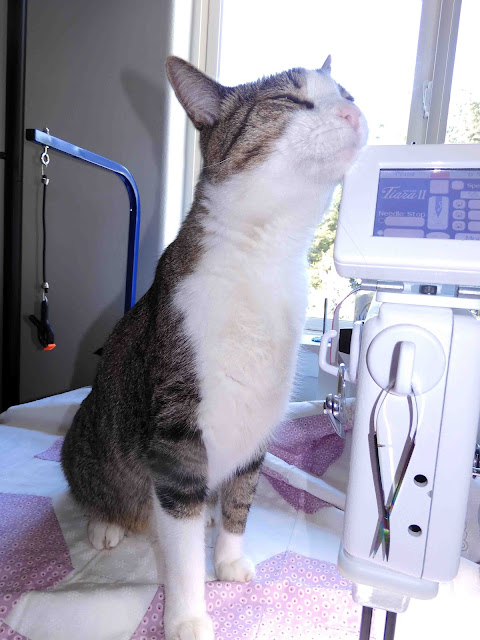 So, hm, I gave that a try myself, but I must be doing it wrong. I didn't enjoy it nearly as much as Smitty does. Oh well.
As for my quilting, I'm using a white metallic thread on the top. I've used this thread before when I quilted the Gingerbread Square quilt. 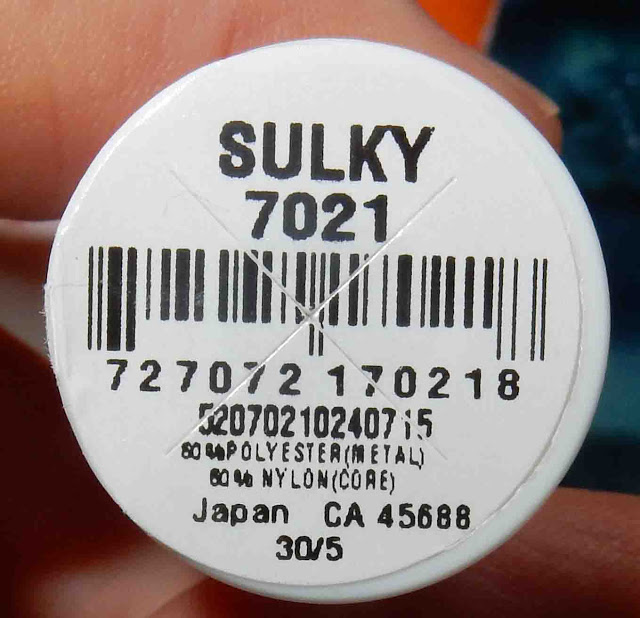 When I was quilting Gingerbread Square, I purchased several metallic white threads and tested them out. The Sulky had the nicest color and sparkle, and it performed well...read that: didn't break every two inches. Here's one of the sample snowflakes I quilted back when I was doing the testing. 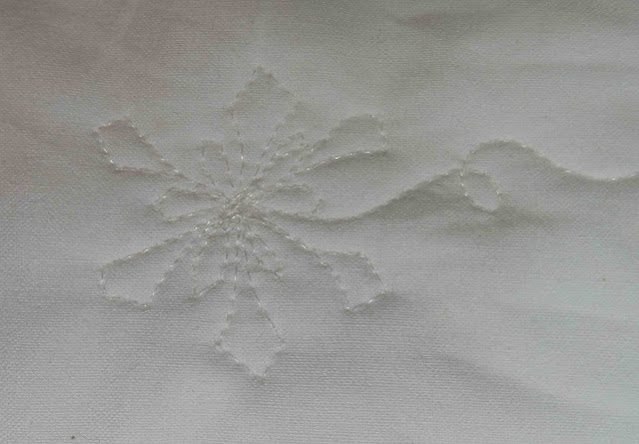 That image doesn't show the sparkle well, but I think you can see it a little better in the image below. 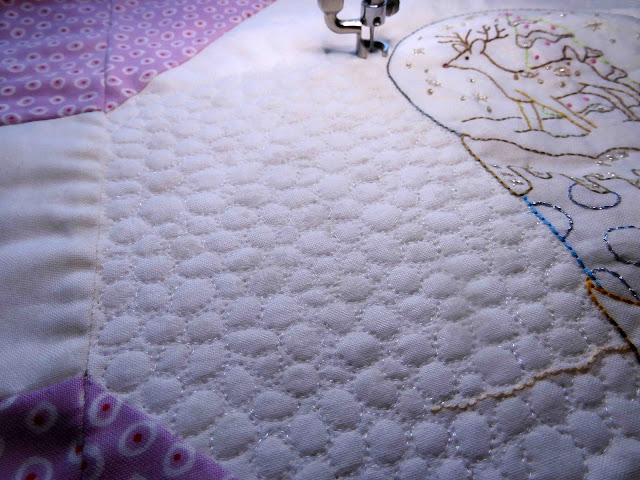 I'm outlining the snow globe, and then quilting snow all around it. It takes about half an hour to fill in the entire block. 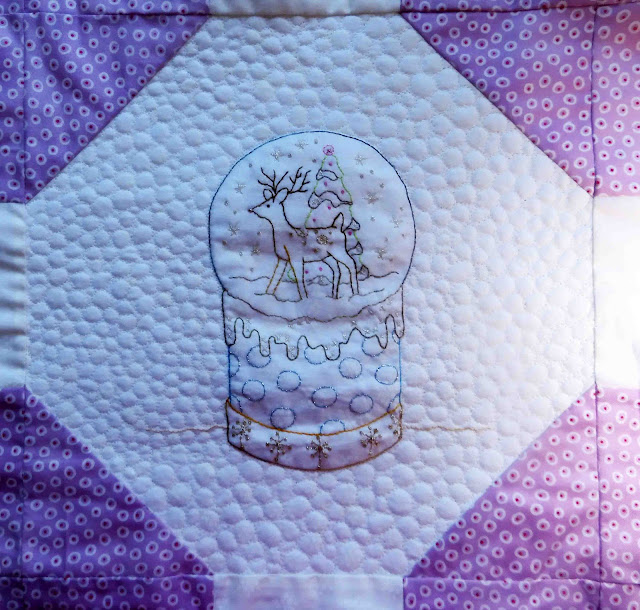 Smitty was my constant companion for this. Since I was focused for such a long time on one block, there wasn't much "motion" in my free motion quilting. I was able to bunch up the quilt and give him a place to lie. Anyone who quilts with cats will know that it is often hard to get the cat to budge once he settles himself in somewhere. 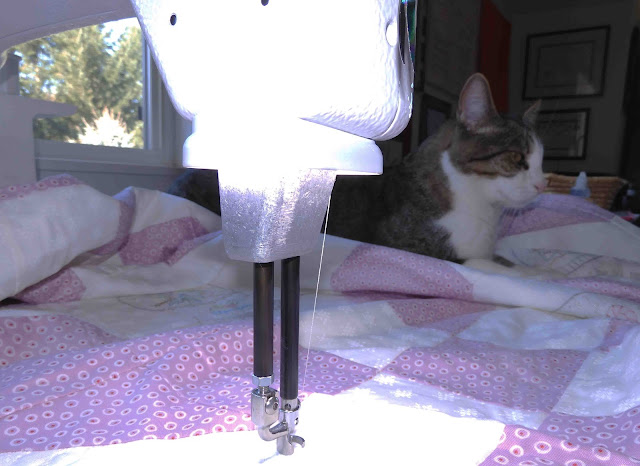 My goal for this quilt is to quilt three embroidered blocks each day, and then I'll start on the 9-patches. If I stick to that schedule, I'm hoping to have the quilting finished by next weekend. There probably isn't enough thread left on my spool, and so I have another spool on order. Hopefully, it will arrive soon, or my quilting goals will be thwarted. 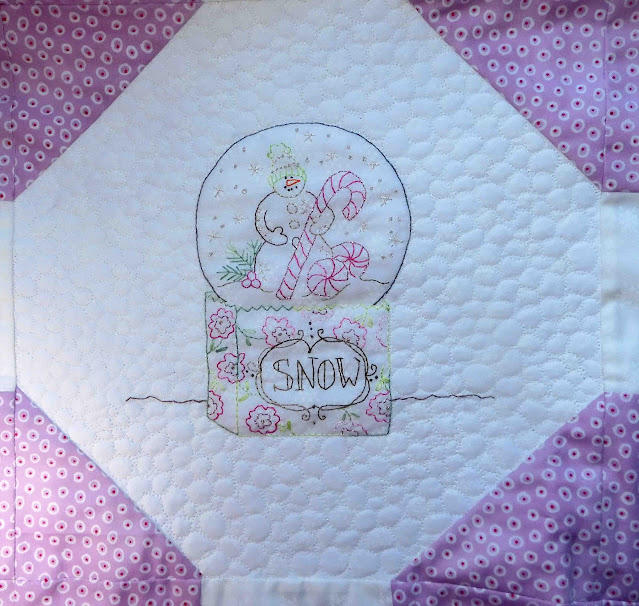 When I had to move the quilt, I encouraged Smitty to lie in the chair next to me. It didn't take long, and the purring transitioned to kitty snoring. Rudely, I woke him up when I took his picture. 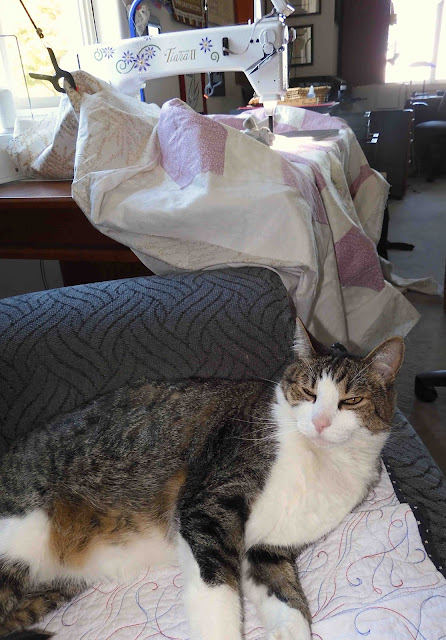 One more block to quilt, and I had the day's allotment complete. I could have done more, but free motion quilting can make my hands and shoulders ache. My sessions are limited to small bites. 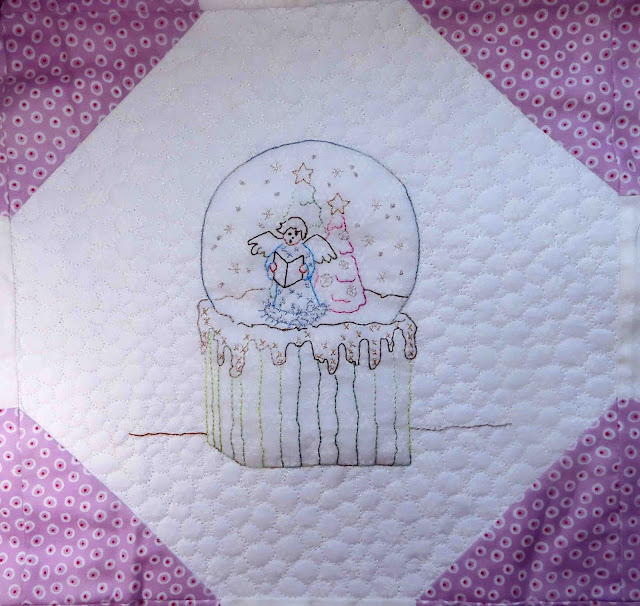 It was nearing dinner time by then anyway. I went out to see what Mike was up to and noticed our red leaf maple tree is sporting its fall colors. The leaves on this tree are ordinarily bright red. 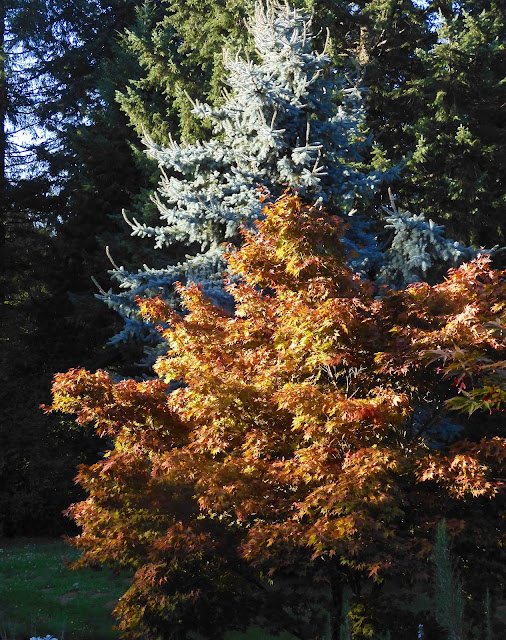 So I haven't looked at the calendar for today, but I'm reasonably certain there are housekeeping chores to do. After that, I'll get back to my quilting. If I can finish three blocks in a reasonable amount of time, I'll get into the sewing room to work on the City Bank quilt. Here's where I left that: 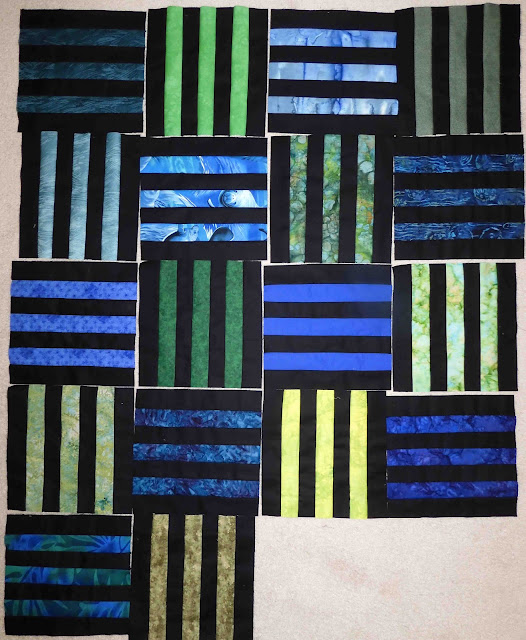 I want to make six more blocks, which will put me over halfway to finishing all the blocks I'll need.
First up, though, our traditional Sunday morning blueberry oatmeal pancakes. Mike says it's the best thing about Sunday. I'm using this recipe, but I add a half cup of frozen blueberries to the mix. Mmm, mmm, mmm. And all this talk about pancakes has me itching to get into the kitchen. So that's where I'm headed next. Enjoy your day, everybody.
Posted by Barbara at 8:27 AM

My photographer daughter would have taken out her fine mister and sprayed drops on the spiderweb. I was so disappointed when I found out she didn't get up early to take pictures of flowers with dew on them, just used her spray bottle instead.

Your snow globe quilting is exquisite...this will be such a glorious piece--I love how it looks...

Our leaves are drying up before they even can color up--it's so dry...
it's pretty much raining leaves ("It isn't raining rain, you know, it's raining leaves of brown...." ).
Hugs, julierose

All that pebble quilting! I love the look, and Smitty looks like he's very helpful. Your red maple tree photo has great colors in it; might be a fun colorway to use in a quilt. I like the three trees one behind each other. I had a giant garden spider build a web on our deck a few years ago. Still fun to look at that photo with the spider still at work.

I know what you mean about quilting making your shoulders ache - I find that and I'm only working on smaller projects. Good for Smitty for keeping an eye on your progress and helping out. Great spider web photos!