Well, things are looking up here at the Traveling Three Cats Ranch. The latest report from the firefighters noted that the fire was 75% contained. When I checked the page listing power outages last night, I was surprised to find our outage was no longer listed. Hm. Then about five minutes later, an email arrived from one of our closest neighbors noting they had power. This morning, another neighbor reported the same thing. So, that was very encouraging news. We won't know about our house until we check for ourselves, but I would be surprised if our power is not on. We've paid for the spot we are in through tomorrow morning, and so we'll probably stick here until then, at least. Rain is expected Tuesday. Once that starts, we are hopeful the fire will be history.

While we were up at the house, we harvested six ears of corn. Yay! I kind of hit a wall, spirit-wise, yesterday, and finding some ripe corn really lifted my spirits. We also picked all the ripe tomatoes. 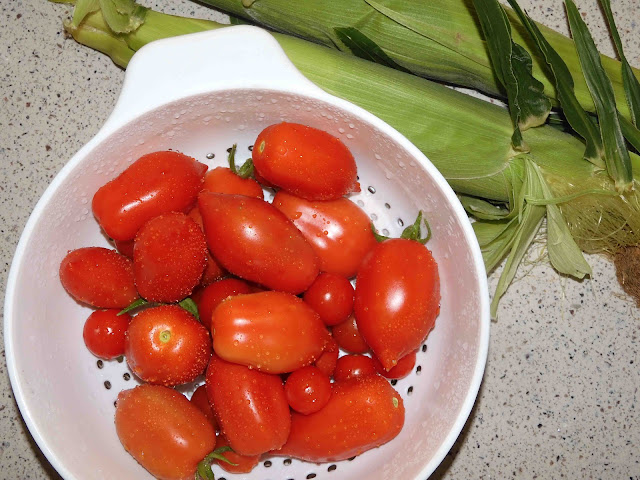 We grilled some steaks last night and baked some potatoes. We also grilled the corn, and it was so sweet and tasty.
Before we left the RV yesterday, the kitties were all settled in for their naps. 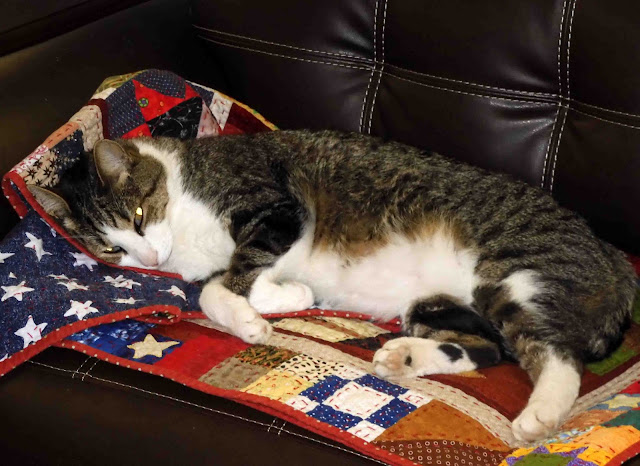 Hit the lights on your way out, wouldja? I'm settling in for some serious shut-eye. 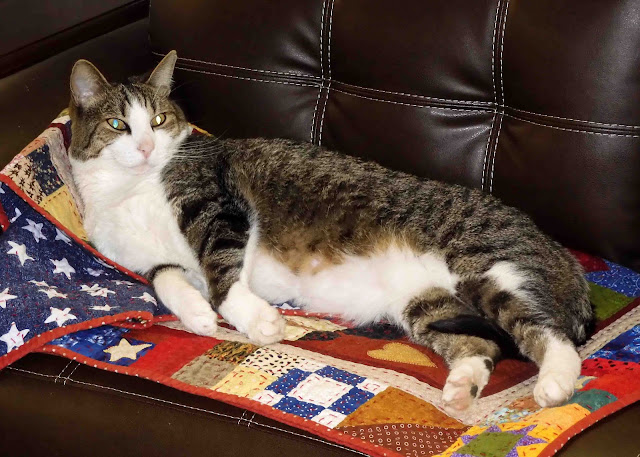 Sadie was up on her little window shelf. That's one of her cat toys there beside her. She picks the toys out of her toy box and plays with them during the night. She also "talks" to them. It's the funniest thing listening to her hopping around and chattering. 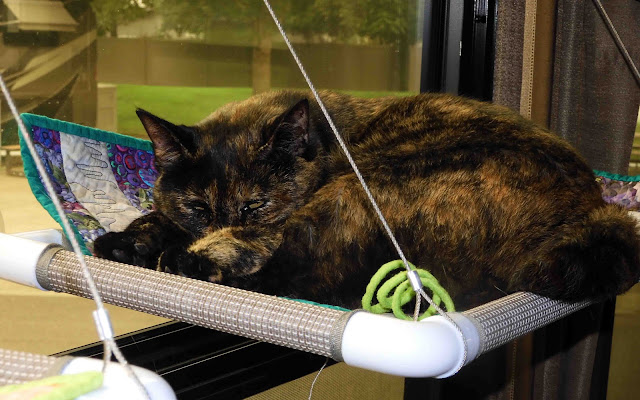 So we ended up just doing some errands yesterday. Before we left on our trip, we considered getting our flu shots. We decided against it, since I can be sensitive to vaccines, and I didn't want to get sick. Since we're home, it seemed as good a time as any. I'm feeling fine this morning, although it did give me a sore arm. We needed to pick up a few things at the grocery store. When we got back to the RV, we took a little walk around. The sun is a dull red orb in the sky. The smoke filters it so that it's possible to look at it with your naked eye. This is a nice park, and the folks here have been very accommodating to us. While I don't anticipate camping in McMinnville ever again (fingers crossed), I'd still come back here if there was a reason to. It's beautifully landscaped. We also discovered we could walk to the aviation museum right from here. We might still go, but we have no plans. Instead, we took pictures of every blooming thing. I love these black-eyed Susans. Recently, I bought some seeds to plant next year. I'm so happy I'll most likely have a house where I can plant them! 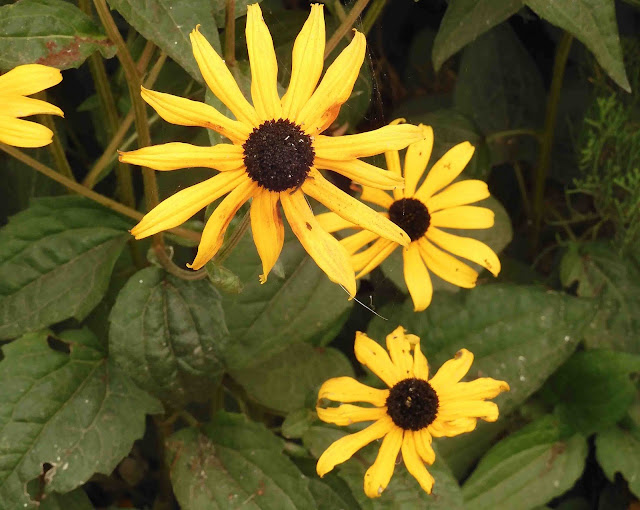 I think these next ones might be a kind of gallardia, although I'm not sure. Maybe they're a marigold. 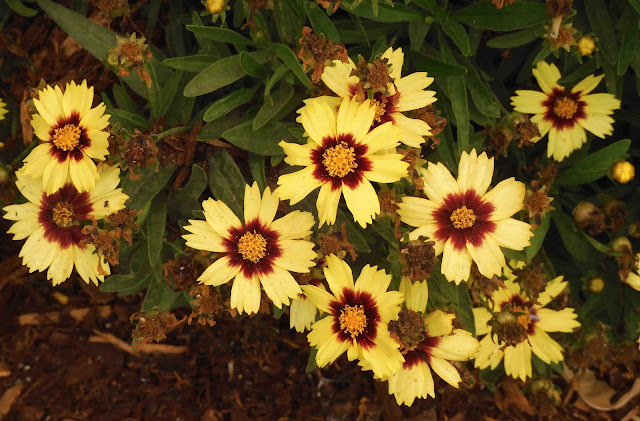 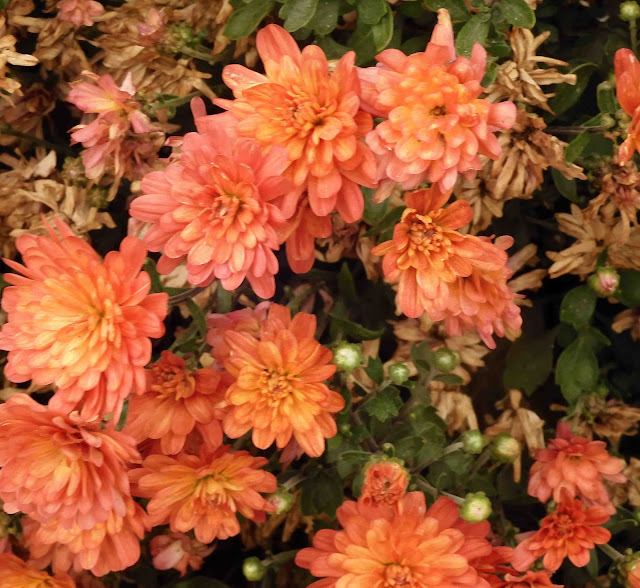 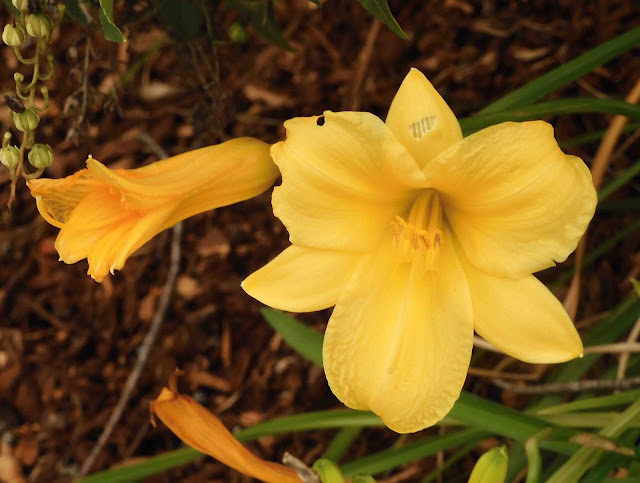 This next one was about the size of a nickel. 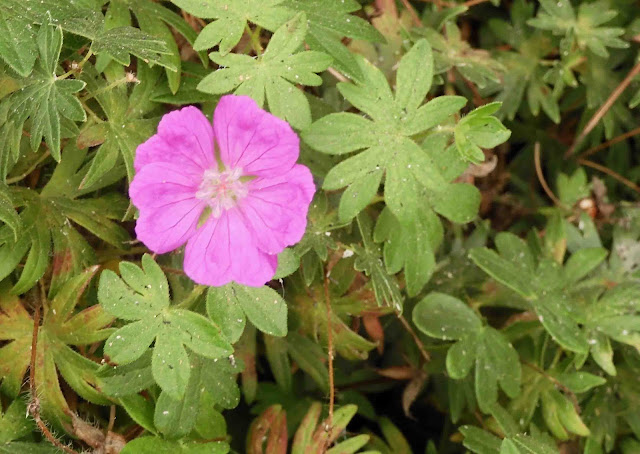 And, of course, roses. There were two women who appeared to be doing some kind of photo shoot here. 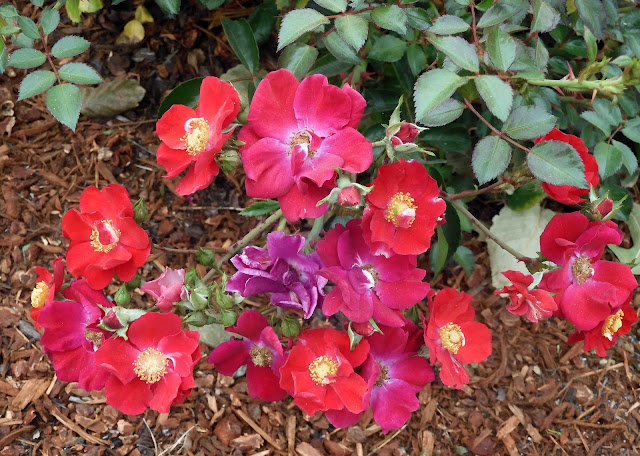 I've done no slow-stitching up until now. It calms frayed nerves, and so it seemed like a good time to get it out and make some progress. 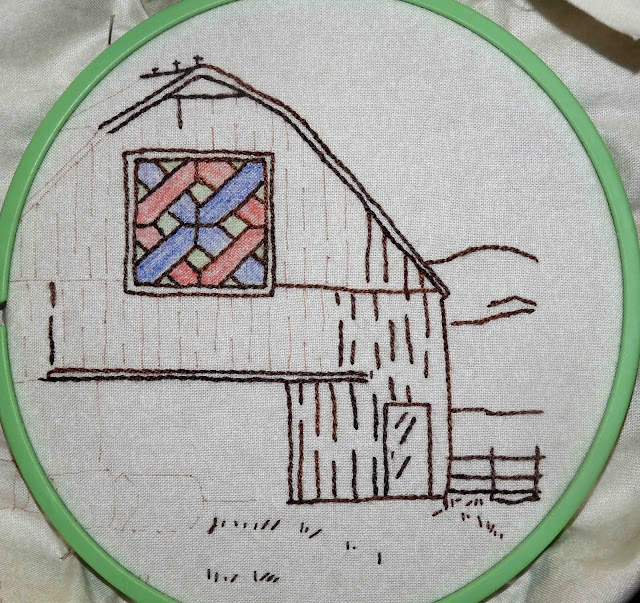 This being Sunday, I'll be linking up with:

Today we'll be heading up to the house again. Hopefully, we'll find the power is on. We may even find the road open. This is what we saw yesterday. This is one of the main roads into our house. If you could see down the road at the intersection, you'd see about 20 fire vehicles lining the sides of the road. 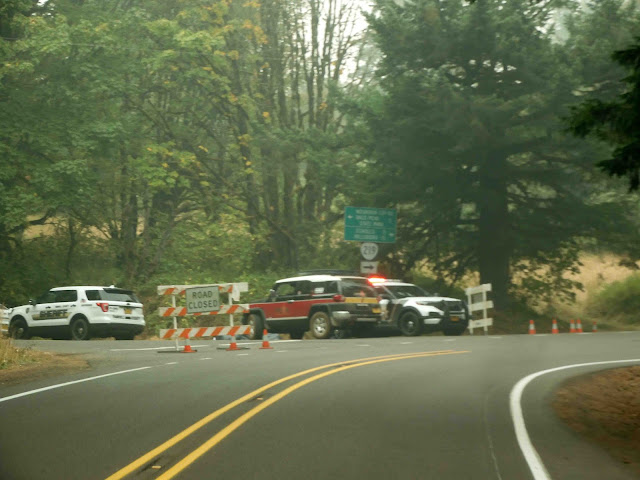 We expect this road will still be closed, but we may find another avenue to the top of the hill opened at this point. The Level 3 evacuation zone has been significantly reduced, and so things are beginning to return to normal. As always, we're keeping our fingers crossed. There's a good chance of rain coming on Tuesday and through the rest of the week. It can't come soon enough.

Certainly hope those fires go out and that all is well for you. The stitchery of the barn is lovely and those cats are so sweet.

Glad you are doing well. Keep up the good spirits. Enjoy your posts.

that great news! Nothing like being home after so much stress.
Loved your photos yesterday of crater Lake....so blue.

Oh boy, rain. How wonderful a gift would that be? Glad you were able to get an emotional boost from harvesting some corn.....it's the small things that can speak to our soul sometimes. Like finding a perfect flower :) Here's hoping the lights are on!

Glad things are looking better for you to get safely home. You have handled the situation far better than I would have. Take care!

Fresh corn and tomato's. Yummy. Lets hope that rain comes in and takes care of the fire before any more damage is done. The cat's look so content on their beds. Stay safe and happy stitching.

Oh Barbara I’ve been off social media for a few days and it wasn’t until my mother said you’d been affected by the fires in Oregon that I caught up. What an incredibly difficult time for you and Mike. The uncertainty and the worry must be awful so I’m just so pleased to hear things are looking better. As you say it focuses you on what matters but even so none would choose to have their home and sentimental things burnt. But of course there are many this year who have had to endure that. Take care and I hope the rain will be a real blessing.

Such a worry for you all, but hopefully the weather is turning and the fires will soon be quenched. I can't imagine how you are coping through all this. But you have each other, the camper, the kitties and some craft work, and somewhere safe to stay, so I guess you just take one day at a time. I'm looking forward to reading about you returning home with everything safe and sound.

You have been through so much! I hope and pray for enough rain to saturate the ground and drown the fires! Thank you for sharing the photos of your kitties! You have such a positive attitude and find beauty in crisis. That's a true gift. Blessings to you and yours!

Hope the fires get contained and you can go back home soon. The tomatoes and corn look delicious, and lovely pictures of the flowers. Love your new embroidery project. We have the unrelenting smoke. Hopefully one of these days we will see a blue sky again, and cooler temps!

So glad things are looking good for the fire being contained What a stressful time for you! Your floral pictures are marvelous

Still praying that your home is safe, and that the fires are out soon.

You are all in my prayers. I hope there is a good dousing of rain up and down the entire west coast - enough is enough.

Great news! I hope your power is back on and more importantly, I hope you get that much needed rain. ~Jeanne

Well such good news for you. It must have been terrible worrying about your home. Glad you and your home are safe.

Barbara,
I have just caught up with all the doings in your part of the world. I have been going no news here as it's all been so depressing. I've just caught up with the ire situation. I feel for you and hope that the fires are out soon. It would be good to find that you have electricty when you get home. Crossed fingers all is well.

It must be a common thing to hit that wall. I hadmyself quite the pity party one night when we were evacuated. The next morning I was a bit better. Getting to the house and finding it normal was a big relief. We won’t get the rain but an on shore flowshould give a few days relief from the smoke. Moderate AQI is predicted for 4 days before the winds shift again. Our hope is the fires quell st least a bit during the rise in moisture content.

It is very hopeful that your home is safe come on rain!

I haven't checked your post for today (Monday), but I do hope you are settling back in at home. I also hope Tuesday brings a good rain, enough to quench those fires. What a year! Glad you were able to enjoy some corn. We are just wrapping up our corn season here. I noticed last night that I can smell smoke in the air, which I assume may be from all the fires out there.

Encouraging direction in your area. Hope you will be able to return home soon with power on. Won't the rain be most welcome when it comes? Best to all of you.

This news is certainly encouraging. Always a good day for napping and toy talking. Corn and maters sounds like a great pick me up, glad you got to it b4 the racoons!

Hooray for rain, I will try to send you some of ours. We have been getting bands from Sally, and all our ponds are beyond full. Grass is belly-fur high and pup is not fond of squishy ground or wet feet, so her struggle is real.

Oh, btw, I took a flu vaccine for first time in forever, and omg, arm is still sore. Other than a migraine that night and next day, and sore arm, no effects. So good luck, whatever you decide to do!

I'll keep my fingers crossed that the rain materializes on Tues and that the power is back on so you can go home for good and not have to keep refueling the generator. Our weatherpeople (we have more women than men right now) are having a poor track record this summer. It doesn't rain when it's predicted and does when it's not. High today of only 63. Autumn is definitely on the horizon.
Pat

Prayers continue for rain for you and a continued improvement in the conditions. Hopefully your power is back on. Flu shots aren't available here as yet but I did get my shingles and pneumonia shots. Still have to get the second go-round of those and then it will be the flu shot.

So happy to hear that things are improving and that rain is on the way and power is back on. Take care.