The Pressure is On

With the produce coming fast and furious from the garden right now, my days have been busy, and mostly spent in the kitchen. Yesterday, I used my pressure canner for the first time in about 10 years. I know this because the last time I had the pressure gauge calibrated was in 2009. So...I'm very good at math...I think that would make it something on the order of 11 years, if you want to get all technical about it.

As I mentioned last week, we took the pressure gauge to our local extension office last week. I grabbed this photo of their building off the internet. They're affiliated with Oregon State University.

They do the calibrating for free on a walk-in basis. While there, the woman behind the desk gave me all sorts of helpful information in the form of hand-outs and the link to where I could download a free app. Oh my gosh...the app was so helpful. So let me just back up a little bit.
Here, I was in the process of building steam in the canner after having "vented" it. 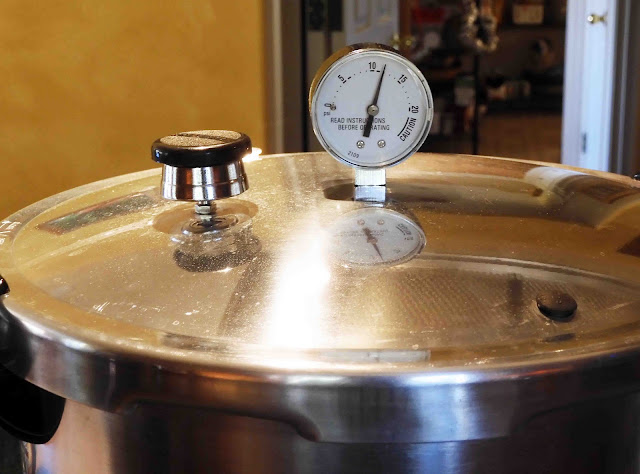 So, now that I've gone through the process, read up on it, bitten my nails to the quick with anxiety, and otherwise turned myself into a fearful expert, let me just go on about what I've learned. Pressure canning is kind of a long process. There's a lot of waiting involved. I first waited for the water to boil, and I blanched the beans. This is supposed to help preserve color, and it will also give the beans a better texture. It's okay to pack them raw too, but you'll still have to boil water. I added a half teaspoon of pickling salt to my jars as well. Once they're loaded into the cool canner, you add about 3-4 inches of water, fasten down the lid, and then turn on the heat. There's a little vent tube at the top where steam must vent for 10 minutes. If I'm understanding the physics behind this, venting removes air from the canner and fills it with hot steam.

Once time is up, you add a weight that plugs the hole in the vent tube. That's the little black-capped thingy you see there on the left in the image above. I was going for 15 psi. When the proper pressure was reached, I started the timer on the app. 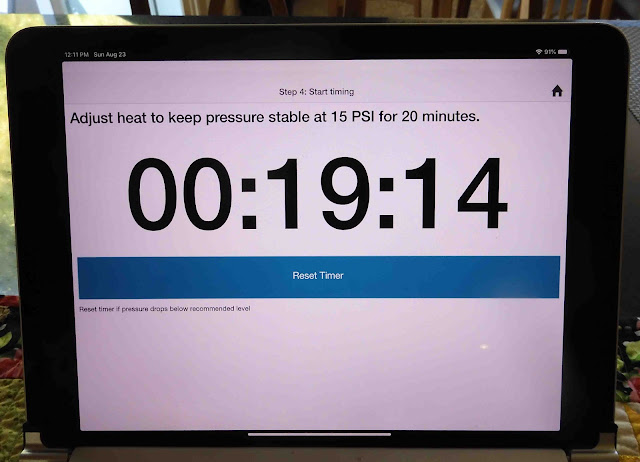 When the app signaled time was up, I turned off the heat and moved the canner to a cool burner. The app has these little checklists, and it won't allow you to go on to the next step until you've checked everything off. It's a fool-proof app. And since I can be a fool, I'm all for that. 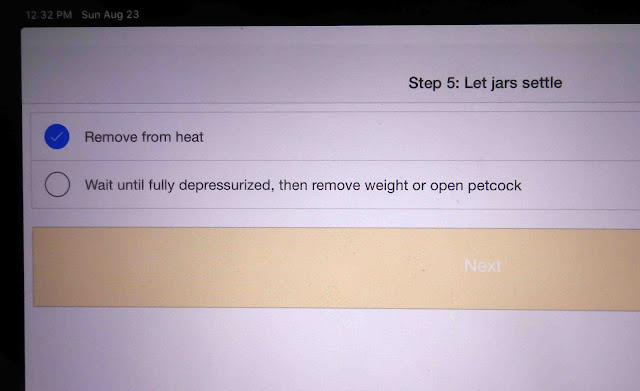 Once the pressure is off, you can remove the weight from the venting tube, but then you still need to wait ten minutes before opening the canner. 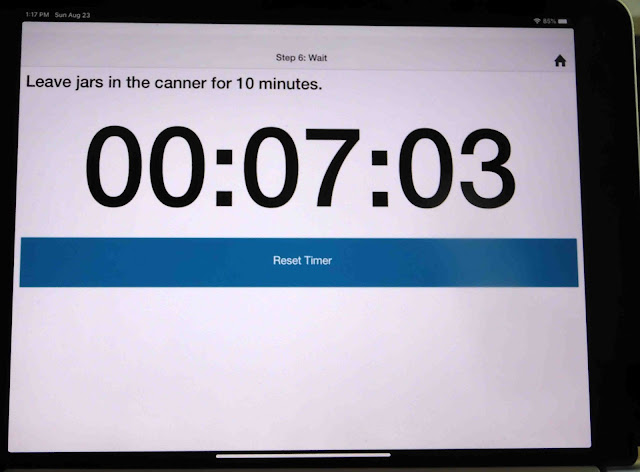 When time is up, you can open the lid, pointing it away from your face, please. Steam will burn you. The app gives you more handy checklists. You can't move to the next one until you've checked the first one. 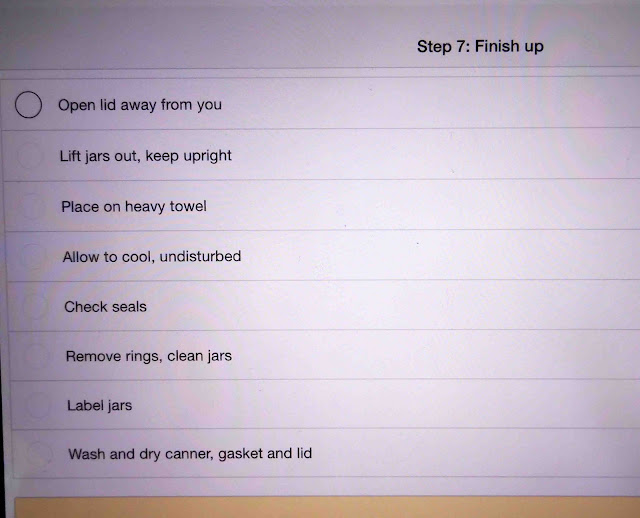 And then, just in case you weren't sure: 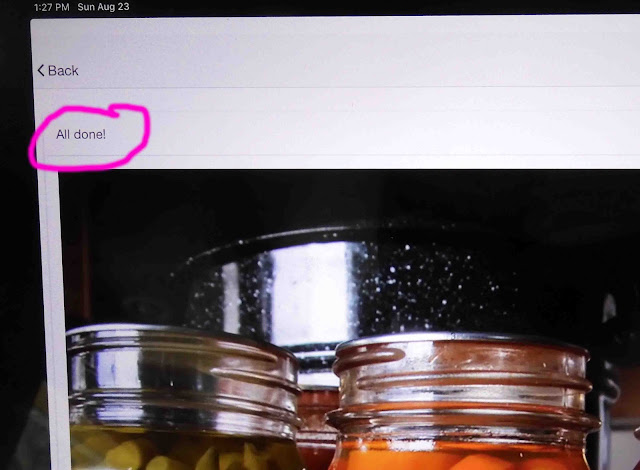 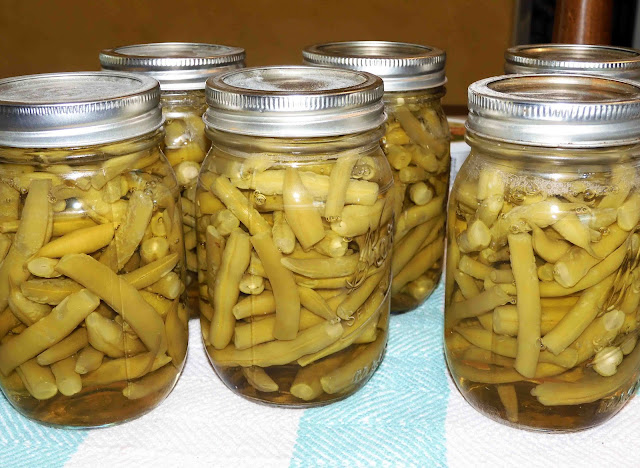 And, honestly, pressure canning is very safe. Yes, there are lots of pictures on the internet of ones that have exploded. But truly, you'd almost have to try to mess up so badly. There are all kinds of fail-safe mechanisms on the canner. I'll probably do more beans, and I'm considering doing some of the beets too. What the heck, right? Oh yes, and the app? You can download it for free right here. There's an iOS version and an Android version.

Speaking of beets, while I was waiting and watching for any signs of impending doom from exploding pressure canners, I made up a salad for last night's dinner. This was very tasty, and it used the remainder of the small beets harvested last week. This is Beets with Orange Vinaigrette. If you click on the link to the recipe, you'll see she used canned beets. Mine were fresh...boiled and skinned. It was a good accompaniment to last night's dinner. (I'll say more in a minute.) 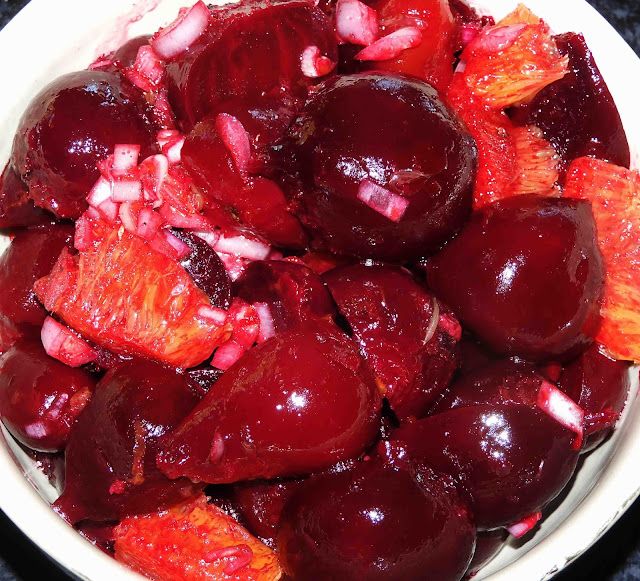 We had lunch, and then getting off my feet seemed like a good idea. What better way than to start hand-stitching the binding for Chicken Buffet. I had in mind to turn two corners, which I did. 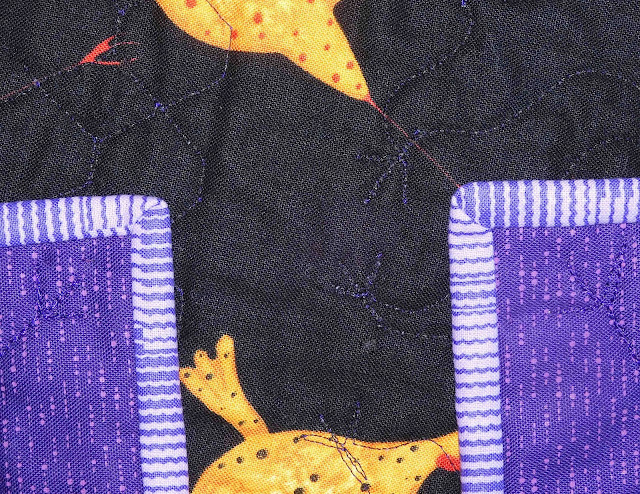 All the while, Chief Dirty Feet of the Never Wash Tribe was sleeping nearby. 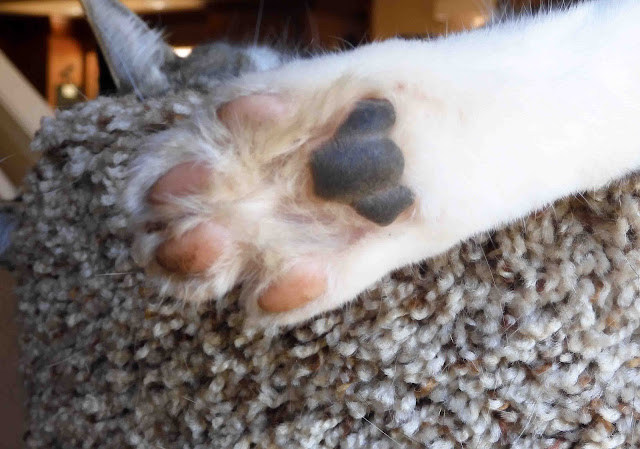 Later in the day, it seemed like as good a time as any to get started quilting the Stitch sampler. It's a small quilt, and so I could sandwich it in the sewing room. 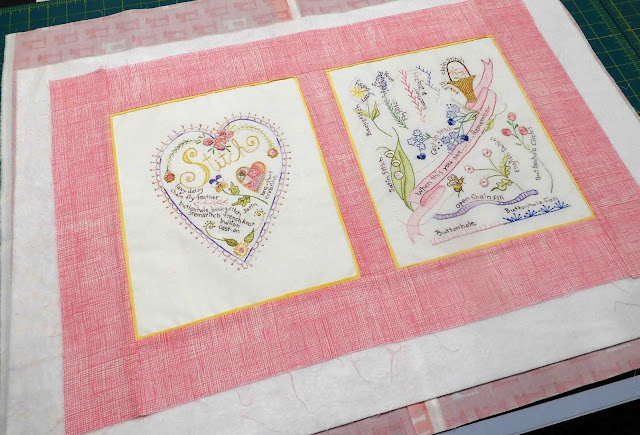 I set up Big Bertha for free motion quilting, and then went to work with a meandering motif in the right-side panel. As I stitched along...DOH! I forgot to embroider this little bit. It's only the second time I've ever done that. 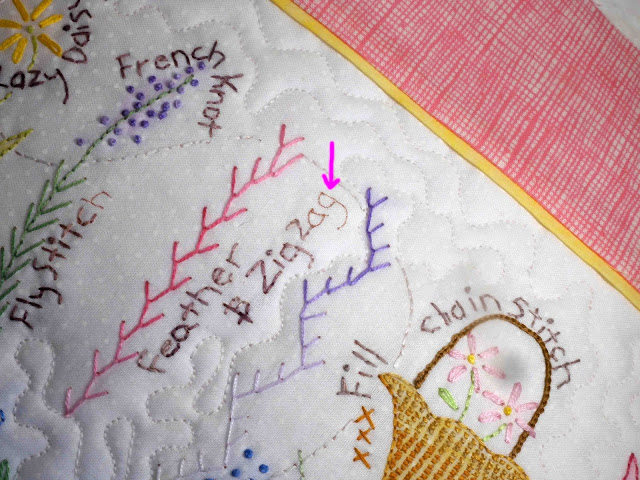 So then, I had to figure out which color of floss I'd used there. Fortunately, it's a variegated floss, and so close in color will be good enough. And it's only back stitch, so that will be easy enough to fix. 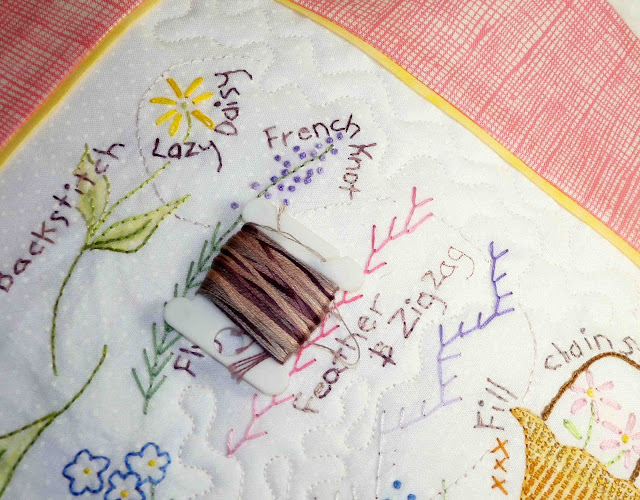 I'll have to fix it when I finish the quilting. For now, I left it where it lay, and I'm hoping to get back to it sometime today. 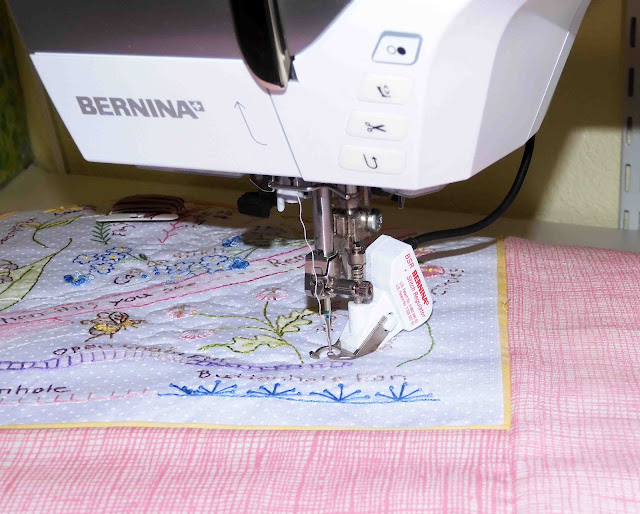 For dinner, we had these Marinated Veggie Cheese Sandwiches with Sun-Dried Tomato Pesto. 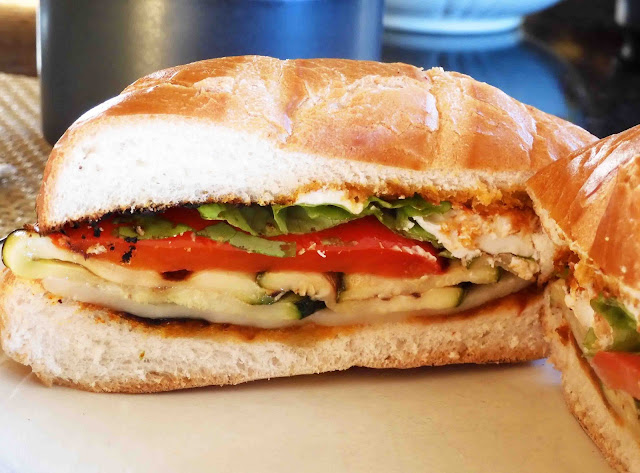 A lot of my menu items these days are selected for their use of the veggies from the garden, and this was one that used zucchini. Count me in! I've made these before, but I forgot how tasty they are.
The vegetables (zucchini and red bell pepper) are sliced up and marinated. They only need to sit in the marinade for 15 minutes, but mine sat overnight. Then they were grilled. The bread was spread with sun-dried tomato pesto (mine was from the grocery store), and then toasted on the grill as well. Then I added a slice of provolone and some lettuce from the greenhouse, and then a sprinkle of goat cheese crumbles. Mmm, mmm, mmm. So we had the beet salad mentioned above, and Zuni Cafe's Zucchini Pickles from the day before. Anything to use up the zucchini. 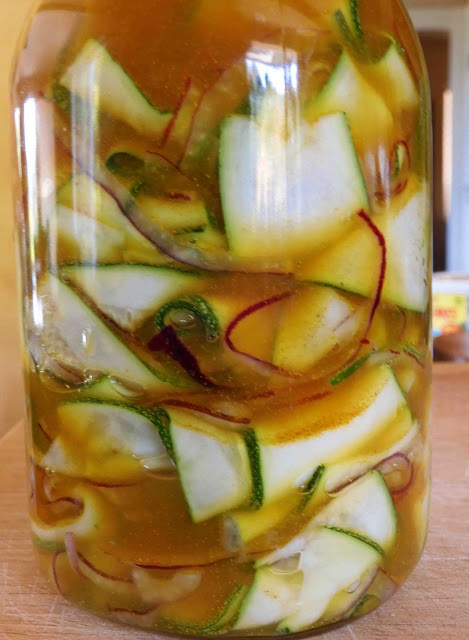 Mike liked the pickles. I thought they were a little strong on the vinegar. If I make these again, and I probably will...never give up a way to use zucchini, you know...I'd probably use rice vinegar or else add more water to it.
So that was a tasty and easy way to end the day. Today we're picking apples, which means applesauce will be close behind. Canning season is in full swing. If there's time, I'll get back to my quilting.
Posted by Barbara at 8:01 AM

Pressure cookers scare the daylights out of me but I suppose that's only because I've never tried using one. I have to admire your bravery on that one!

My Mom managed to blow a pressure cooker three times - the last time created such damage my Dad removed all supplies and said NO MORE. Hmm, Moe must be a member of the dirty feet tribe on the East coast.

I’ve always been afraid of pressure canners too! Heck, I can’t even get up the nerve to try my 2-year-old Instant Pot. Anyway, congrats on a successful batch of beans. I blanched and froze 2 packs of beans today and have tomato sauce simmering on the stove.

As I kid, I was always a bit wary when mom was using the pressure cooker, so I've never been enthused about trying one. Funny thing, though, we popped all of our popcorn in a smaller pressure cooker, which I used with ease. Go figure. Anyway - I'm glad your experience was a good one and I can see how the app would be so helpful. That sandwich and the salad look delicious!

I do have a pressure canner (over 40 years old, I'd guess), but I never used it to pressure can. I used it as a boiling water bath for canning tomatoes, chili sauce and pickles. I don't do any canning any more. You really need a garden to make it profitable. I also have no desire for an Instapot. Like Cathy, I'd be afraid to use it. Hope you can squeeze in a bit of stitching here and there.
Pat

I am a retired Home Economics teacher. I used to demonstrate to my students the proper use of a pressure cooker. Many had tales of their mother using one and having an explosion. Since retiring, a few years ago we remodeled our house it was long over due. We bought in in late 1989. When designing the kitchen, my daughter who is a Interior Architecture designer helped us with the details. My kitchen now has a steam oven, warming drawer and convection steam oven. The steam oven is especially helpful as it takes 10 minutes to sanitize canning jars, then fill them with food and process another 10 minutes. It beats using a pressure cooker.

OH MY GOODNESS!!!! You are so awesome, girl!!! As I was reading, I was thinking, Oh cool, that app would be so great to use - and then you even gave me a link! Thank you!!! I have the old family pressure cooker and the gauge tested perfectly, but I have not had the chutzpah to actually use it since the time I tried a tomato ketchup and opened it to find it had siphoned. Red water and jars two-thirds full. I learned later that I hurried the process by letting the steam go too soon. Live and learn. I'm off to get that app! I have garden produce to can! (Hey, check out my pickles over at the Lilypadquilting blog!)
quiltnsrep(at)yahoo(dot)com

My family kept telling me horror stories of pressure cookers so I gave mine away to a friend. I think I need to invest in a new one plus the app as I used to find it very useful. That dinner menu looks very tasty. I needed a new recipe for the end of this week and that will fit the bill nicely.