It was another busy day here yesterday. There was a little of everything to do, I think. I started out by processing the beets. My yield was 5 pints of pretty pickled beets. 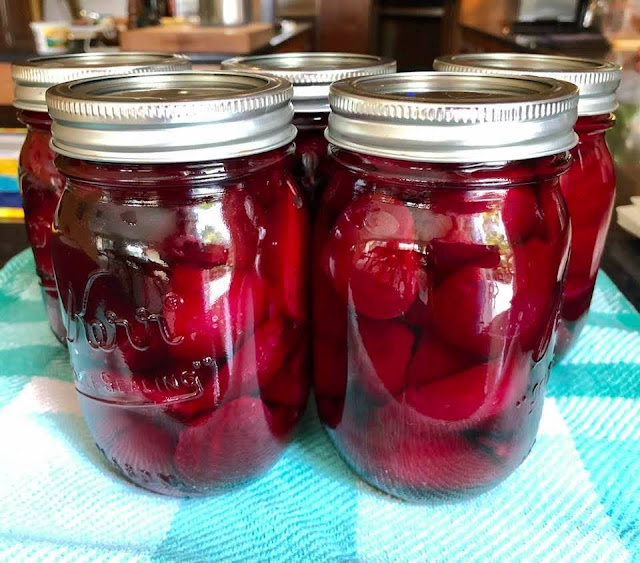 That's probably enough to see us through the year, but I'll probably make more before I'm finished.
After that, I went to work on my slow-stitching. When I finished for the morning, I decided I'd stitched enough to move my hoop to the next position. 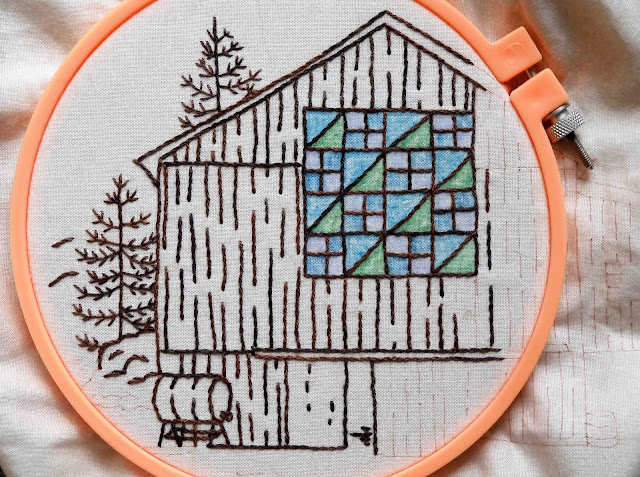 I was a little worn out stitching all those straight lines for the barn, and so I decided to move the hoop lower and stitch the cardinal. He's one of just two figures I've colored in, aside from the quilt blocks, and so I hope he looks okay when the stitching is finished. 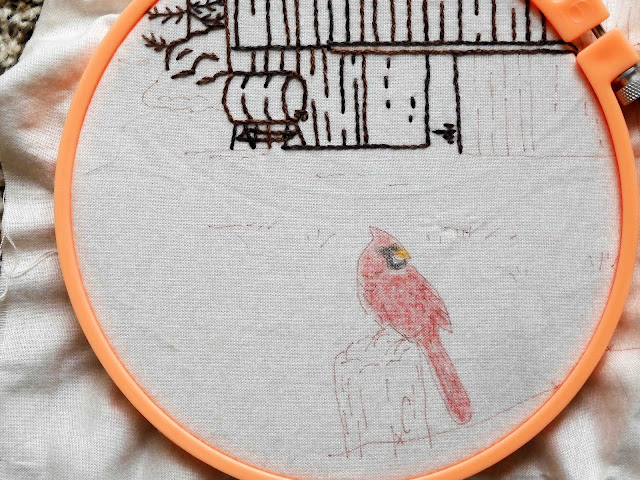 And then it was time to bite the bullet and sew the binding to the Shop Hop quilt. This is a very large quilt, at 78 x 78 inches. My domestic sewing machine is set up in a little nook in my basement. With walls close-in on three sides, it can feel a little cramped working with something so large. Always, the anticipation is the worst part, and this went together without much trouble. Now it's ready for hand-stitching, and it's packed into the RV for our trip this week. It will keep me in stitches while we're away. 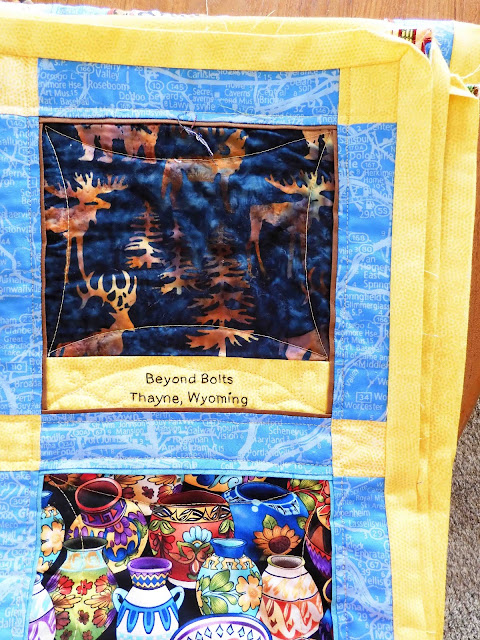 Now that it's time to pack for a trip, I'm thoroughly beset with laziness. I love RV travel. I hate packing and unpacking. So, I didn't do much the rest of the day.
It was a nice evening, and we ate dinner outside. I tried something new. This is a recipe from our Cooking Light Diet, called Panko-Coconut Shrimp. I baked it in my toaster oven, and served it up straight from the baking sheet. 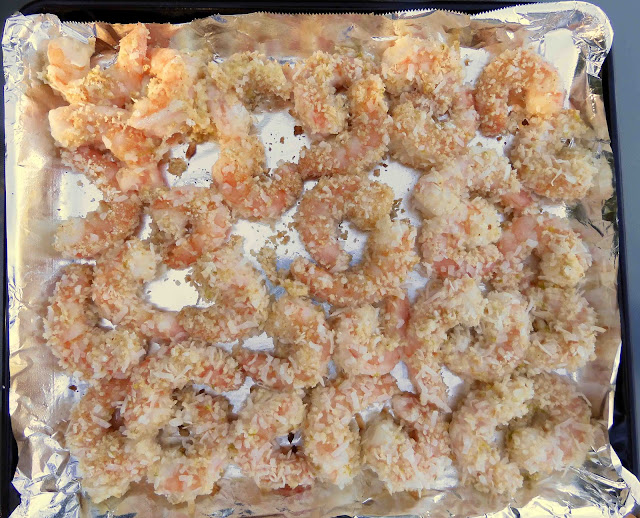 There are a few restaurants in town that serve coconut shrimp as an appetizer, and you can also have it as a main dish. I've never tried to make it at home, but this turned out to be surprisingly easy. It was also surprisingly delicious. It's a little messy to bread the shrimp, but not too bad. I kept a paper towel handy to wipe the breading off my fingers occasionally. I served it with some of the sweet cherry pepper jelly canned last week, and it was a great main course. If you want to try it, I'd suggest increasing the amounts of coconut and panko to 3/4 cup each. I ran out of breading before I ran out of shrimp. 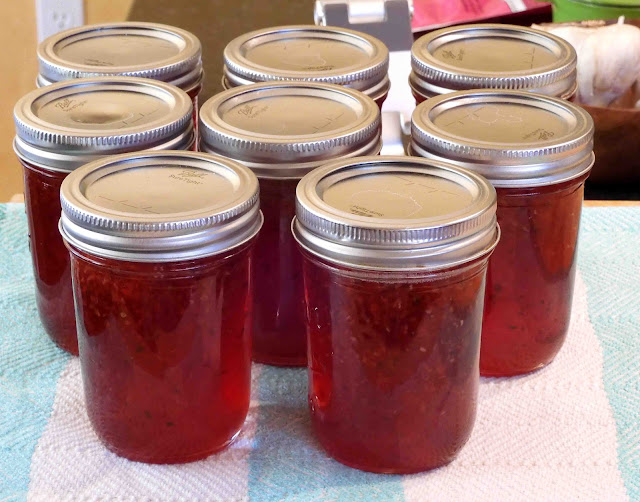 We've also been eating a lot of watermelon. It's a refreshing side dish for summer weather. There was half a melon leftover from when I made Watermelon Salad with Rum and Mint earlier. Rather than make the same salad again so soon, I decided to make this dish for Watermelon with Blue Cheese and Prosciutto. The original recipe (there in the link) has you grilling the watermelon. We didn't think that added anything to the dish, other than making it more complicated, and so we just had it raw. 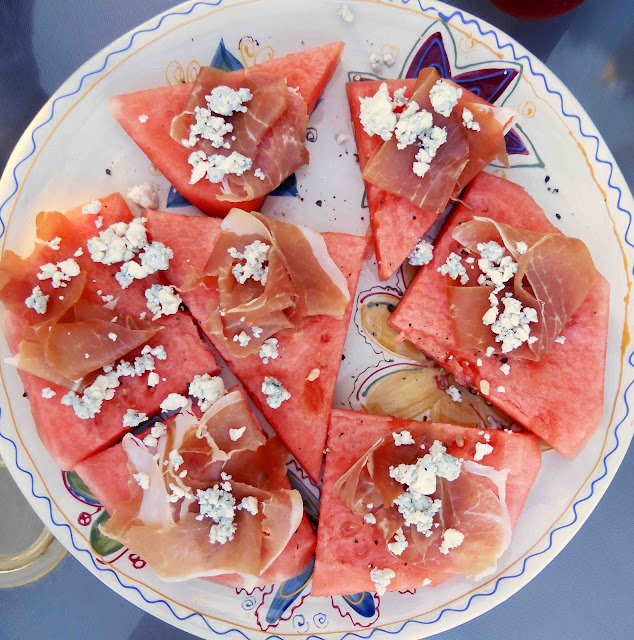 When I was growing up, all melons were salted before we ate them. The Italians like prosciutto with their cantaloupe, and the saltiness of the prosciutto is a good accompaniment to any kind of melon.
While we were eating, I spied this guy at the far end of the property. He's probably looking for squirrels. The squirrels seem to have moved to the other side of our field. We've dispatched 26 of their brethren, either via deportation or else via Smitty's superb hunting skills. Now, I imagine the hawk will have its way with them. 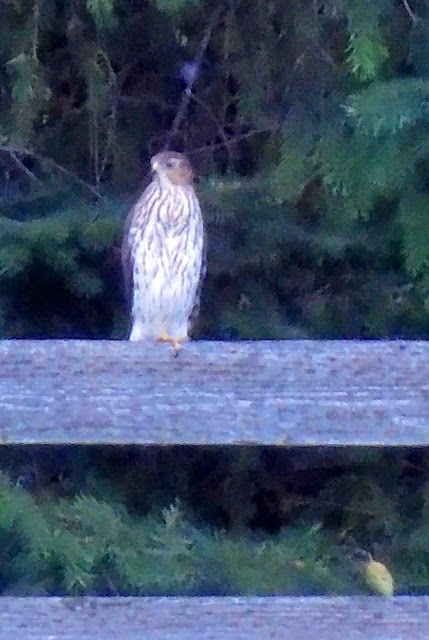 He sat there the whole time. I'm afraid these aren't great pictures. I'd activated the digital zoom on my point and shoot camera to get close enough. We have several resident hawks in the neighborhood, but we don't usually get to see them just sitting. Most often, they are seen soaring overhead. 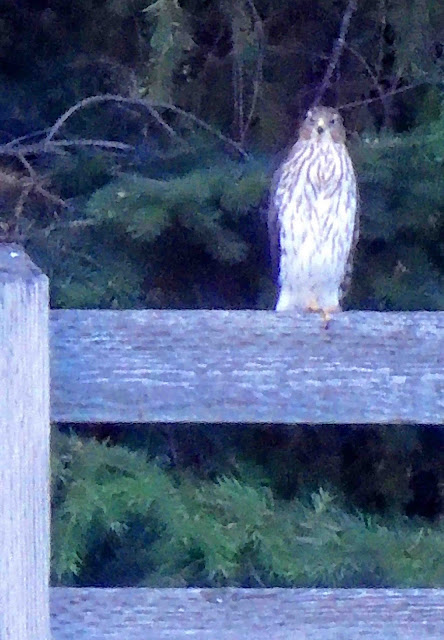 Okay, so it's a new day. I really need to get serious about packing today. My plan is to hoe the garden and harvest any zucchini that are threatening to take over the planet. After that, I'll pack everything I can without going to the grocery store. Tomorrow morning I'll make a quick trip to the grocery store to pick up anything I'm missing, and then we'll be ready to go. If there's any free time, I want to finish off the top-stitching for Dancing Chickens and Flying Pigs. 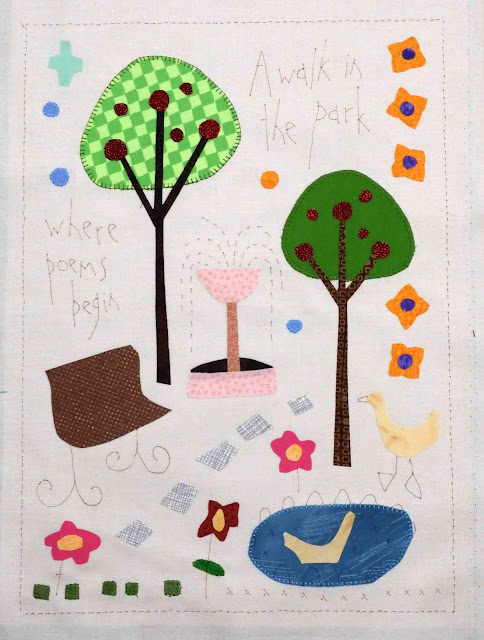 There's plenty of stitching to take along when we go, but I don't want to run out.
Posted by Barbara at 7:47 AM

Great projects. I made coconut shrimp recently in the air fryer and they came out yummy. Love beets, your canning looks lovely!

Hi,
Love pickled beets...so yummy with a baked potato and a piece of steamed chicken breast. The Hawk is beautiful...nice capture. Really like the Dancing Chickens peace. Have a safe and happy trip!

The coconut shrimps sounds really tasty and I must get on and pickle some beets. The pictures of the hawk are lovely to see. John and I have just returned from a four day break which included quite a bit of bird watching. I'm pleased we've had our trip as the UK government is starting to tighten restrictions again.

Oh I love your barn embroidery with the bits of color, neat idea! The food photos all look scrumptous. I will have to try the shrimp at home as my husband loves coconut shrimp. Happy Stitching!

I always enjoy seeing what you're stitching - the barn quilt blocks are great! Sewing the binding for your shop hop quilt will be a good RV project, too. Thanks for sharing the coconut shrimp recipe!

Alas there will be no shrimp recipes attempted here - Resident Chef is violently allergic to shellfish and even the smell of it is enough to cause an upset. I do remember how good it tastes though! Beautiful hawk photos - lucky to get one to sit still and pose for you.

How do you decide what to eat when you’re camping? We’ve dragged our camper to a state park about 15 miles from our house just for a change of scenery. I grabbed everything from the frig before we left but not sure if I have a complete meal when it comes right down to it. I’m with you on the packing and unpacking though.

Oh yum, pickled beets - I love them, but rarely have them (no one else in the family likes them). I'm with you on the packing and unpacking; it's my most unfavorite thing to do. I'm guessing that's either a Sharp-shinned hawk or a Cooper's. They make short work of anything they catch, believe me. Our squirrels and songbirds get very nervous and very quiet when they are around!

We have a hawk who visits our birdbath. When he/she gets done, these is no water left!
Give the piddies a scratch from me!

Always enjoy reading your posts - especially now in these pandemic time. They bring normalcy to my day. Those shrimp look yummy.

Melon with prosciutto? Looks interesting. Salting melons is not something we do in my family, though we have friends that only eat melon with salt. Hope you've got all your preparations mostly finished for your trip. The getting ready and cleaning up always seem to take so much longer than the trip.