Getting Ready to Get Ready

Before any packing can occur, two things must happen: grocery shopping and laundry. That's how yesterday was spent. Have you ever noticed, though, that laundry is a great household chore? Now that we have these fangled things called "washing machines" (I'd call them "newfangled," except they aren't new), you can wash clothes and sew at the same time! I'm so glad I was born after the era of washboards and pounding the clothes on rocks by the river. Who's with me?
So anyway...food is bought and put away. Clothes are washed. Today, I really need to get serious about packing things. But that's a story for tomorrow's blog. Not that you'd be interested. As for what happened yesterday...I made another mask for yet another friend. I was in such a hurry to get it finished and into an envelope for mailing that I totally forgot to take a picture. My friend is a lab tech in a hospital, and she requested a mask with beakers, flasks, and/or test tubes. When I offered to make masks for friends, I told them I probably had a fabric for any theme they could name. So here's the fabric I chose for my friend. I purchased this some time ago. All I can remember is that it is called "Apothecary." 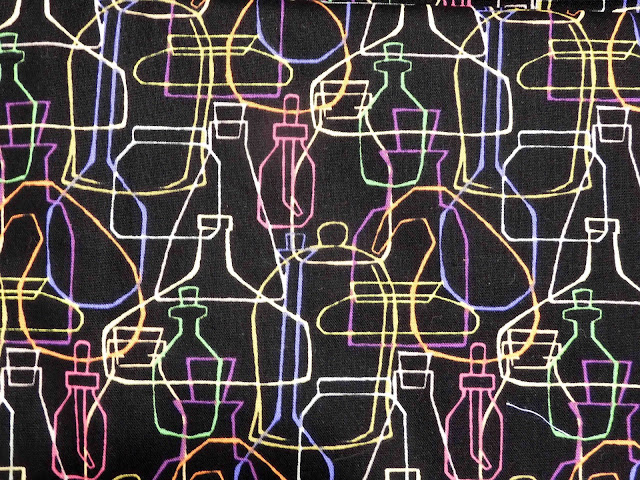 While we were at the grocery store, Mike was whining and complaining about his mask. It slides up and gets uncomfortably close to his eyes. In truth, it's probably a little large for his face. It was made using the paper template from Laundry Basket Quilts. As I mentioned in a previous post, I sprung to purchase the plastic template from Creative Grids. After making more than a dozen masks, I've decided I like the Creative Grids template best. It's a sturdy template with a non-skid backing, and I can cut four pieces of fabric with ease. Here are the two masks I made for him and for me yesterday. 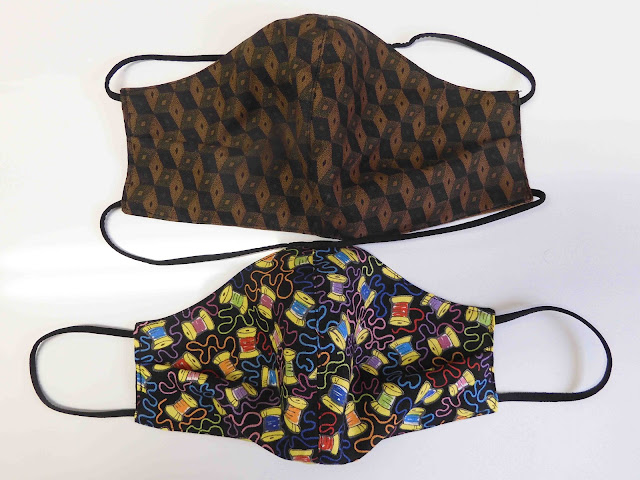 Here's why I like the Creative Grids template better. In the image below, the top mask was made using the paper template. All the lines, except for the center seam, are straight lines. Pay particular attention to the top of each mask. You can see that the top mask (with the cats) is cut straight, while the bottom mask (with the spools of thread) is cut on a curve. It curves away from the eyes, but still gives good coverage for the nose. Also, there is a pleat which gives some allowance for size adjustment. Finally, the same template can be used to make masks in three different sizes. 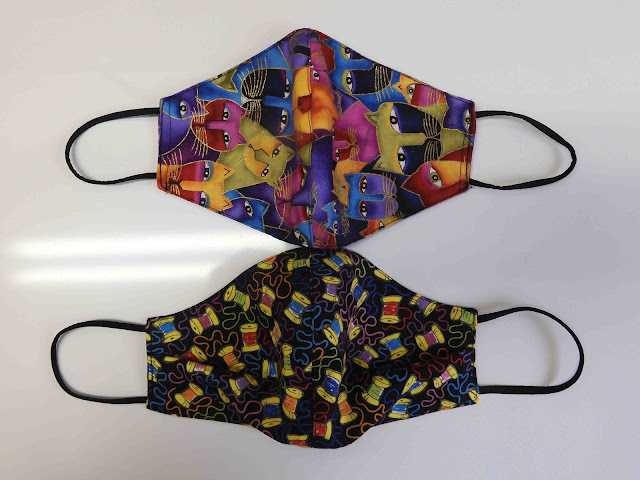 So I'm probably finished making masks for a while, but honestly, they're pretty easy, and it's been a good way to use some scraps. Also, it's been fun choosing themes for my friends.
When those were finished, I went to work making the final sections for And On that Farm. Sadie was especially helpful in this endeavor. 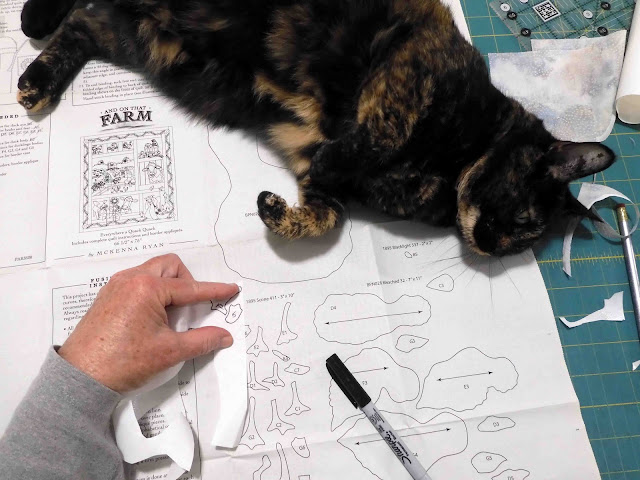 And Sadie likes birds of all kinds.
The ducklings look purrticularly appurrtizing! 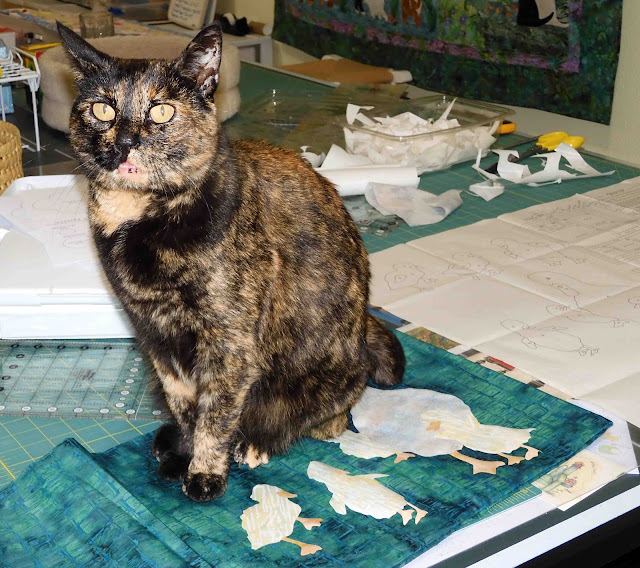 When they were all finished, they looked like this. They aren't fused to the background fabric just yet. 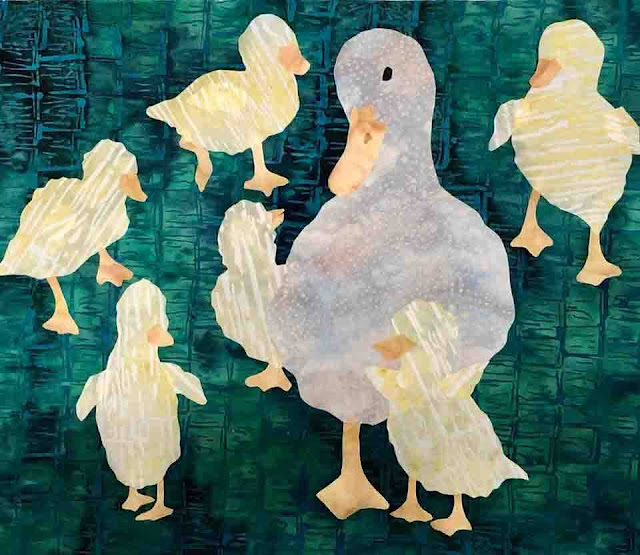 So let's just take a look at how the finished quilt will look. Below is the picture from the pattern cover. All the blocks are made now. You can see where the duck and ducklings will be fused in the bottom right. Also, I need to make all the applique for the border. 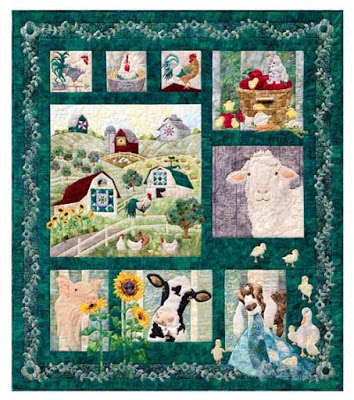 The first step, however, is to start sewing it all together. And so that's what I'll be doing next.
We'll see how today's agenda goes. I'm either packing my clothes or packing some food. Either way, I'll be making a couple of dishes ahead, and so I'll be spending some time in the kitchen. I'm really hoping to get the quilt all sewn together if I have the time.
Posted by Barbara at 8:04 AM

I'm with you on the laundry machines! I say you can take away my microwave, you can take away my dishwasher, but if you so much as make a move towards the washer and dryer your life will flash before your eyes! My definition of hell on earth is the time lost sitting in a laundromat!

Yep, laundry is easy. Until you have to fold socks. *sigh* (But it sure beats using rocks in a stream!) The ducks are cute already and I'm sure they'll improve with your creative hand.

When I was growing up my mother had one of the old fashioned wringer washing machines and no dryer. It was line drying summer AND winter. I remember my Dad's long johns standing in the corner of the living room by the register until they unthawed. Laundry was done on Monday without fail. Those ducks look so cute even though I know they're not complete.

I do remember using the wringer washer and hand tub. Line drying was the pits in the winter. I had forgotten about this quilt and it will be good to see it finished.

I guess I’m a little older or my parents had less money. First was the washboard. Hers was glass. At least the laundry room was large in post housing and had 2 sinks for the washboard. One to wash one to rinse. Second was a wringer washer she rolled out into the yard and filled with a hose. Or brought pots of boiling water from the stove. Eventually she had a self contained washer where it sat inside and drained into a pipe. And yes, lots of line drying with winter stiff fabrics being thawed by the floor heater. I am grateful every time I think how she did laundry for what we have today. For me modern plumbing is what I would hate to give up. Next is electricity.

I like getting ready to get ready. Isn’t that the truth! Just getting all in the house is a big chore then the real details begin. Love your masks. I have another 20 on deck. Those ducklings are very cute.

I've contemplated getting that mask template, since I keep making them now and again. I do like that pattern the best, and I like that it has multiple sizes. Sadie looks very helpful, there. Somebody's got to hold that paper firmly for you! Hope you have a productive day, whichever you end up doing. And yes to washing machines so time can be better spent at the sewing machine!

Are you putting a wire in your masks to snug up the nose? It really makes a huge difference in the fit. It could also be that that style mask doesn't work for Mike's face shape. I tried that mask pattern and while the nose wire helped, the mask still had a tendency to ride up on my face. I get a much better fit with the surgical style mask. I cut my fabric 8” wide by 8.5” tall, with an additional 2.5" strip to make binding to make pockets to run the elastic through. In addition to fitting my face better, I find that the extra space around the nose from the pleats makes it easier to breathe on really hot/humid days. If Mike hasn't tried that style, it might be worth a try. To run the elastic through it in the behind the head style, cut 1 long strip and run it up one side of the mask through the binding pocket and then down the other side's pocket. You can either tie it off, or use cord locks to make it adjustable.

Love the pharmacy bottle fabric for your friends mask. It has been fun matching fabrics to friends and coworkers. Getting the right size mask with the right sized ear loops has been a challenge. The three of us all wear different sizes. Love the ducklings. That is such a cute quilt.

that duck and her ducklings are so cute!

I just received my Creative Grids mask template. Do you put something in the nose area? I've read a chenille stem cut down is good. I wear glasses so I need the nose part to really contour to my nose so my glasses won't fog up. Can't wait to make one. I'll probably start with the in between size to see how it fits.