When I was attending Palomar College in San Marcos, California, several decades ago, I worked for a woman named Louise Diener in the college's job placement office. She told me that if one remembered to say "rabbit, rabbit" before saying anything else on the first day of a month, it would bring good luck for the remainder of the month. This morning, I checked in with my friend, The Google, to see if it knew anything about this. Lo and behold, it did. You can read about "rabbit, rabbit" right here. In these many years since I worked for Miss Diener, I've only remembered to say it twice, this morning being the second time. I think we can all use a little good luck right now, don't you?

For good measure, I'm including a picture of a rabbit. This guy looks as if he hasn't had a haircut since the lockdown orders began...kind of like me. But, hey, I have an appointment for June 24th. See? Things are looking up already.

It rained most of the day yesterday, and so it was a mostly sewing day. And rest assured that I caught up on my housework too, so it was a good day all around. Before I did anything else, though, I had to fix the error I'd made on the Ties & Tails block. If you read yesterday's post, then you'll remember I had the tie section sewn upside down. 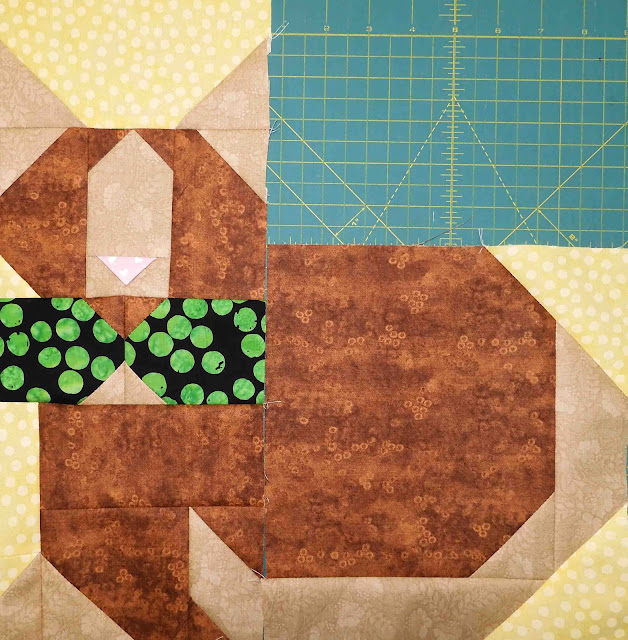 Once I saw that, it was imperative that I fix it immediately or risk a disruption of the space-time continuum. Here's how it looked after I'd fixed it. It was a fairly easy fix. I'm just glad I noticed it before I was any farther along. 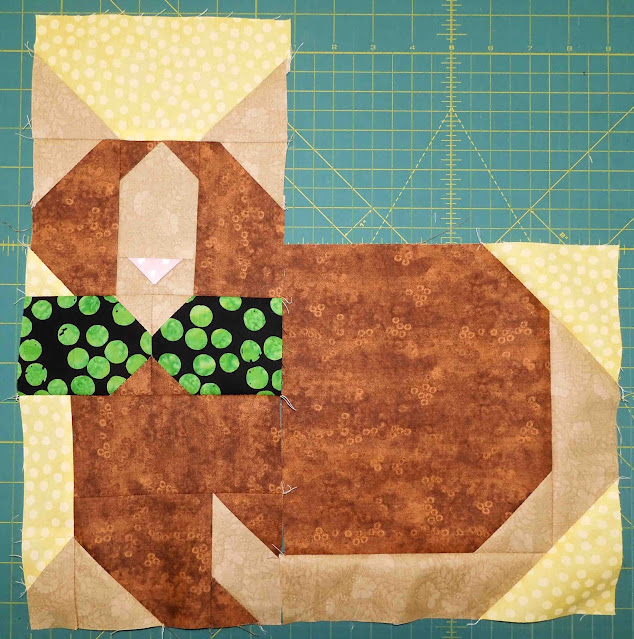 Fortunately, my furry furriend showed up for enpurragement. 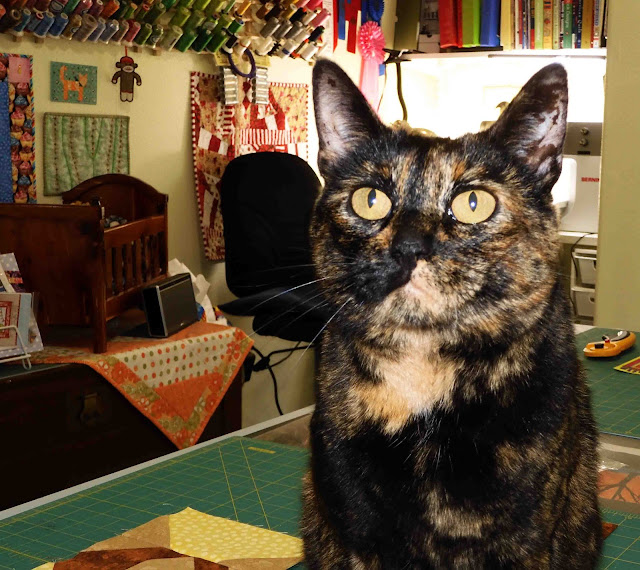 Her facilitation was offered up with such exuberance, she was encouraged to take a nap, which she did willingly. 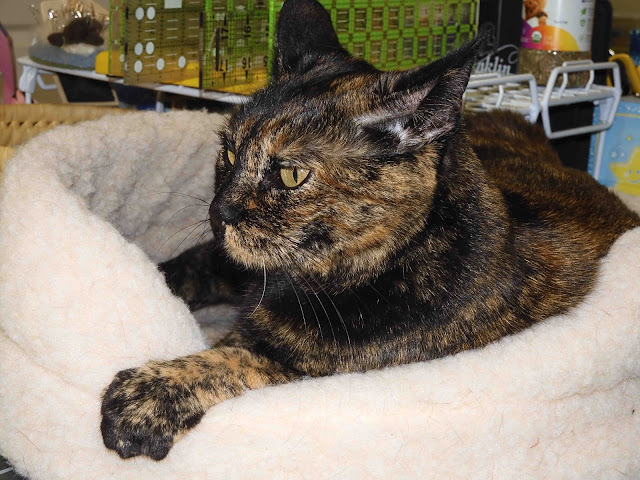 Okay, so getting on with the quilt block, I finished all the piecing. This is the second block for this quilt. For both, I've run out of background fabric scraps before I ran out of background, and so a few bits have been sewn together to make them large enough. It hardly matters, except there are a few seams where there shouldn’t be. You won't tell, will you? 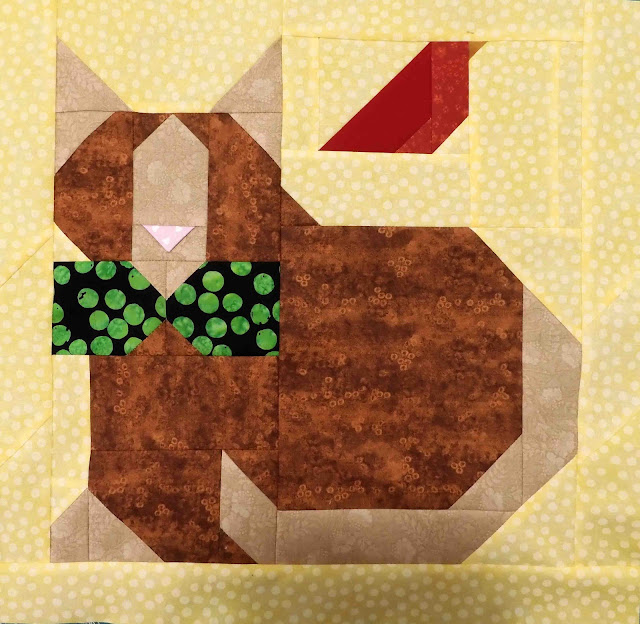 From there, I fused the eyes onto the cat. 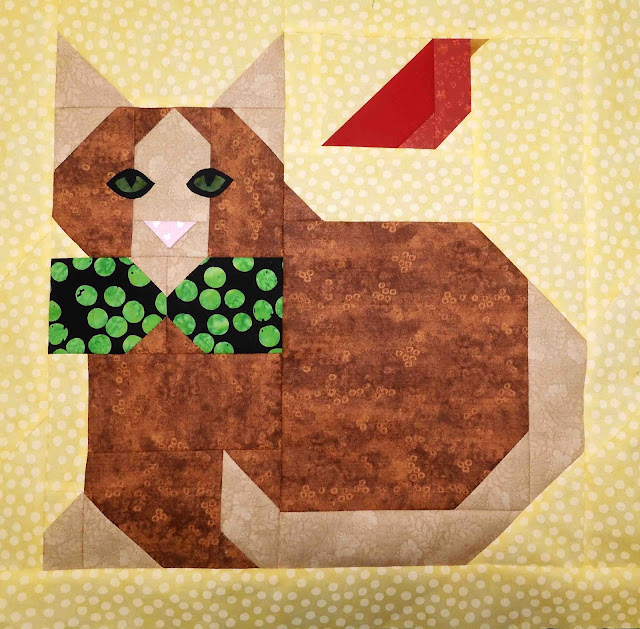 Then machine embroidered the mouth, whiskers, and legs on the bird. Also, I gave the bird a hot fix nailhead for an eye. 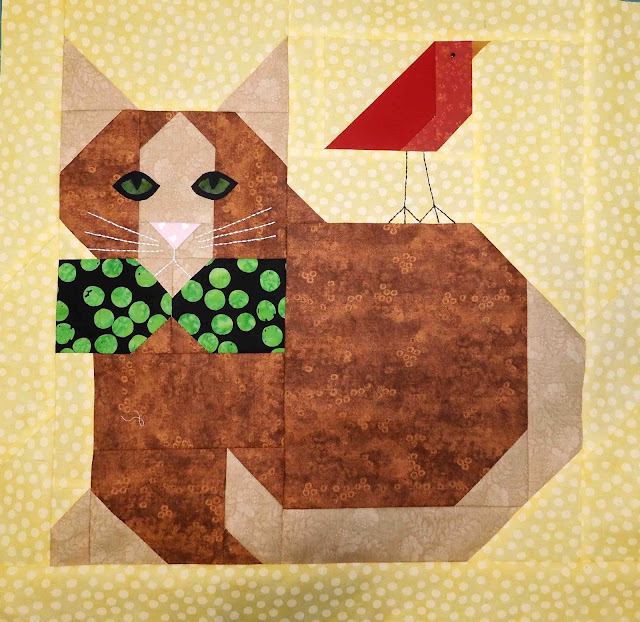 Then, I added a flange. 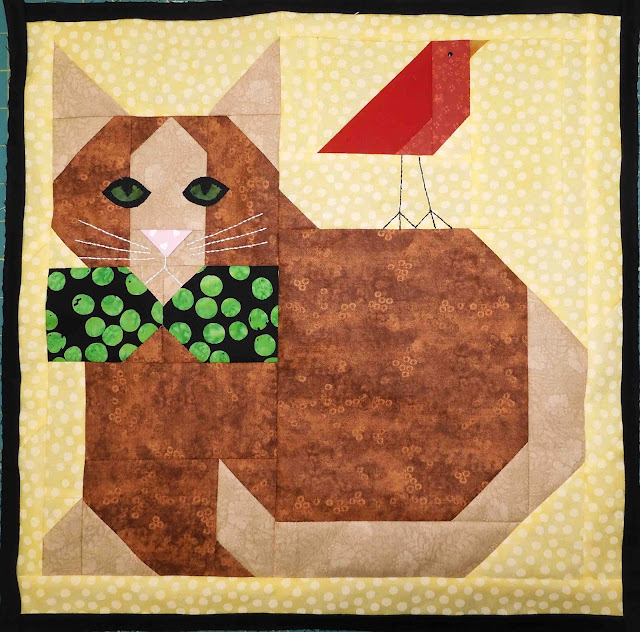 And finally, the pieced sashing. This quilt is going to use a lot of my red scraps. 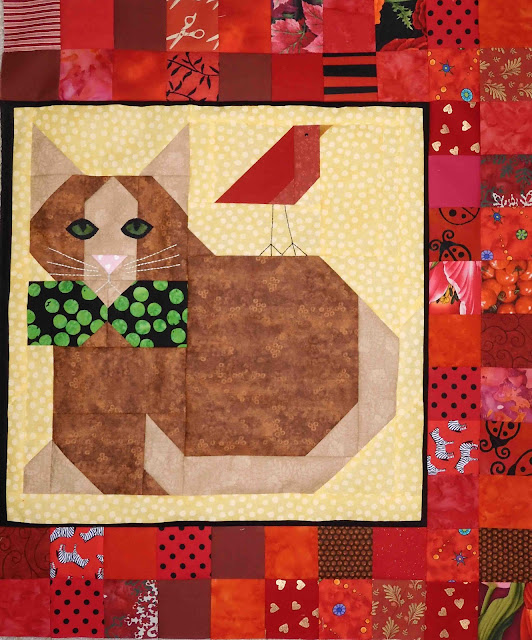 Here are the two blocks I have for this quilt so far. 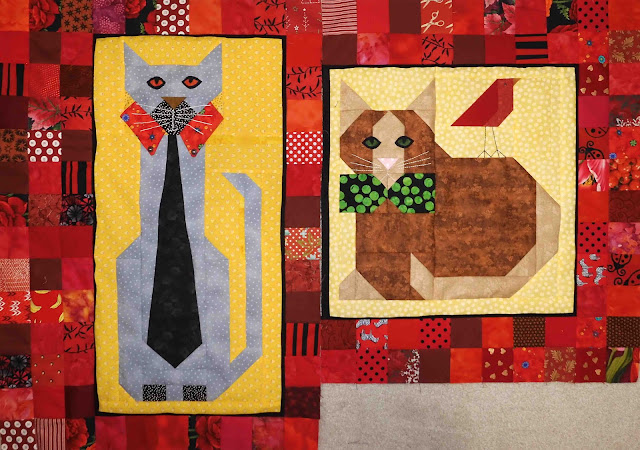 Also yesterday, I got started on the 10th block for Appalachian Memories. I always start with the quilt block and work out from there. Still a long way to go on this one. 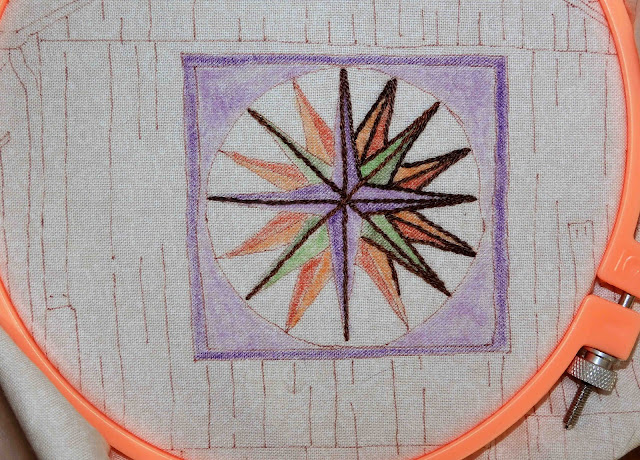 That pretty much took up my whole day. If you read yesterday's post, you might recall I was combining two recipes. We had leftovers of the Bulgogi Meat Loaf from the night before. I thought it might taste good as the meat in this recipe for Korean-Style Grain Bowls. I was so excited to try it, I'd already taken a bite and broken the egg yolk before I remembered to take a picture. 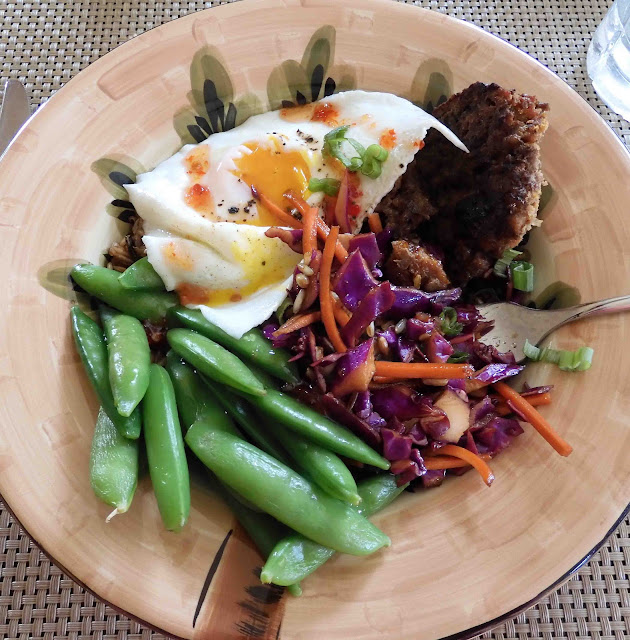 It was good, but the flavor of the marinade is kind of important in the second recipe. The marinade is used to pickle the cabbage and carrots, and it's also mixed into the rice. Since I didn't have any marinade made up, I used a 1:1 ratio of teriyaki sauce and rice vinegar, and added just a touch of sesame oil. It worked out, but the other marinade is better. I'd do this again, but I'd make at least a small portion of the marinade to include with the rest. It was tasty, anyway.

Okay, so it's time to choose a goal for June's

Eliza probably won't be back from her spa treatment until mid-June, and so I'll use the month to sew the embroidered quilt blocks for Friendship's Garden into a finished flimsy. I finished these blocks over a year ago, and so it's high time. 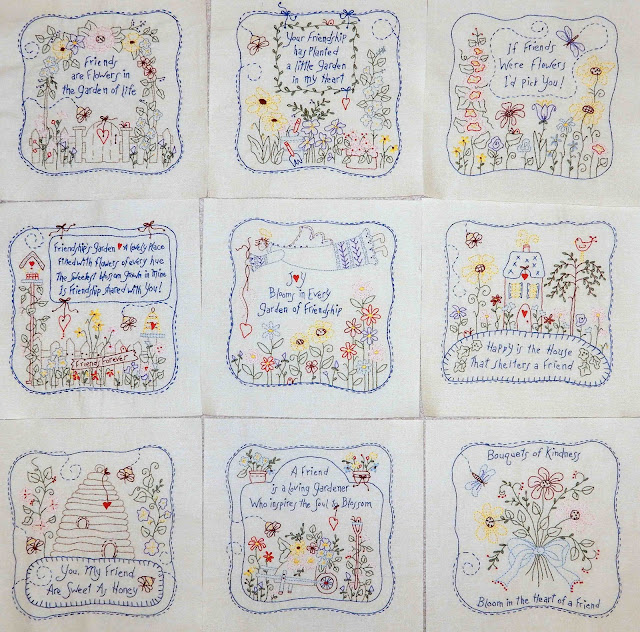 I have some pretty fabrics pulled from my stash for this purpose, but I haven't decided on how to finish it just yet. It'll require some auditioning and, no doubt, a consult with the Resident Retired Engineer.

The sunshine is back, and so I'll spend some time weeding the vegetable garden today. Mike has the sprinklers set up on a timer now. I should probably check in and figure out what time they'll be running before heading out. Having them come on while I'm working would be an unwelcome surprise.
Posted by Barbara at 7:49 AM

Hi,
Love your cat blocks...your garden blocks are
awesome...looking forward to seeing them worked
up into a quilt top...your food looks really
yummy...have a great day!

Oh what a cute kitty!!!
and I forgot to tell you I like the colors you picked for the sign on the barn--
and I always seem to follow my own rules--
for the OMG--I always seem to pick 3 goals instead of one--
why is that?????
give the kitties a hug from me--
luv, di

It is of utmost impurrtence to have a furfriend assist with a furblock. The scrappy red really sets these off. Great choice for OMG and look forward to viewing the fabrics pulled. We had sun, but still very cold for the month of June.

I recall years ago, back when I golfed fairly regularly, having a sprinkler go on right by me while I was getting ready to take my shot. I wouldn't recommend it. Haha. Your cat blocks are looking good; you always find such fun cat quilts. That dish looks so good! I didn't sew much at all yesterday; I've lost my sewing and blogging mojo. Today I'll just fiddle around in my sewing room and see what happens.

Your curiosity regarding words usually has me intrigued. "Rabbit, rabbit" is one I had not heard. Too bad my elders are all gone as it would be interesting to hear if they knew of this tradition. Both sides of my family were rich with folklore, superstitions and traditions. That’s how I learned how dropped silverware would tell you company would come, from what direction and their sex. At my grandmother's it was always a talking point and guesses were made on who would be coming.

New month, new goals and hopes for your peonies and garden growing vigorously.

Love your kitty and rabbit blocks. Those pretty embroidered blocks definitely need to be moved to the finish line.

The first is always 'rabbit, rabbit' day at our house! A fun tradition from my daughter's great-grandmother! I don't know if it brings me luck but it puts me in a lucky frame of mind! Fun block! Purrfectly darling!

Rabbit, rabbit... Learn something new everyday.
Dear REE ( Mike) like your choice. My husband is very good at colors's too. We appreciate how you help.
Love how the quilted cats are coming along. Guess that pattern will now be in my list.
All growing things are coming along very well, in spite of the little devious destroyers. Sorry for you.
Thanks for your beautiful and interesting blog.
Hugs.

The "rabbit, rabbit" was a new thing to me. But I agree, we could use a good bit of luck (and goodwill) nationwide. Love the kitty blocks, very fun. Good luck with your one monthly goal.

Interesting to read about the 'rabbit' tradition. Wonder how we could convince the entire world to step outside and shout it all at once. Love your kitty blocks - so much personality in each one.

Lovely blocks. Thanks for linking up with Elm Street Quilts One Monthly Goal and good luck on your project.

Those blocks are super cute. I can't wait to see the finished product.