There was a little time spent in the garden yesterday, but mainly just hoeing down weeds and checking for sprouts. None yet. The rest of the day was spent in the sewing room, sewing the nine hand-embroidered Friendship's Garden blocks into a finished flimsy. The blocks were already framed in green, and the next step was to add the sashings and cornerstones, and then start sewing them together. I usually do this block by block. The first row looked like this:

This project might have gone faster except that I got confused about which side of the block needed sashing, and which part would be joined to the rows already sewn. When I ran out of cornerstones before I ran out of blocks, I realized my error. Sheesh. Kind of a beginner's mistake. Anyway...with much consternation and a discussion with my seam ripper, I had the second row sewn together and added it to the first. 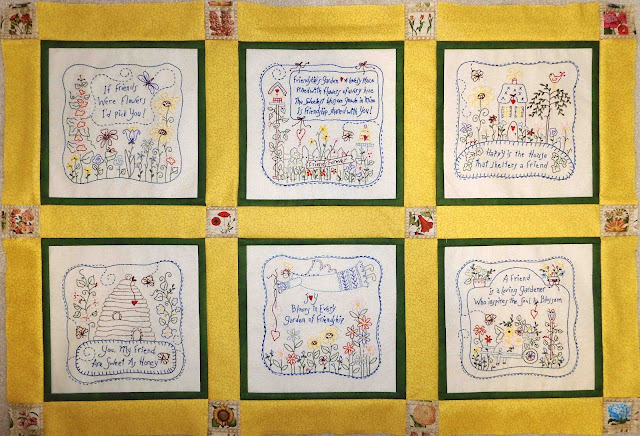 The third row went together much easier, and the interior of the quilt was finished. 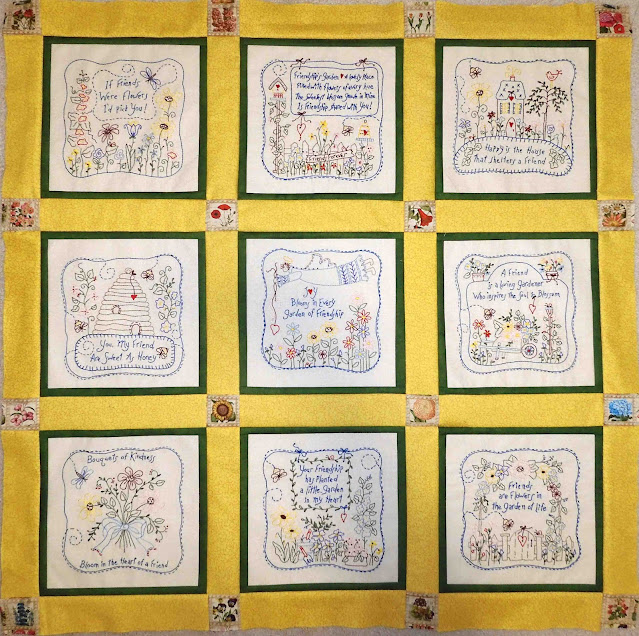 From there, I added two borders, and I had myself a finished flimsy. 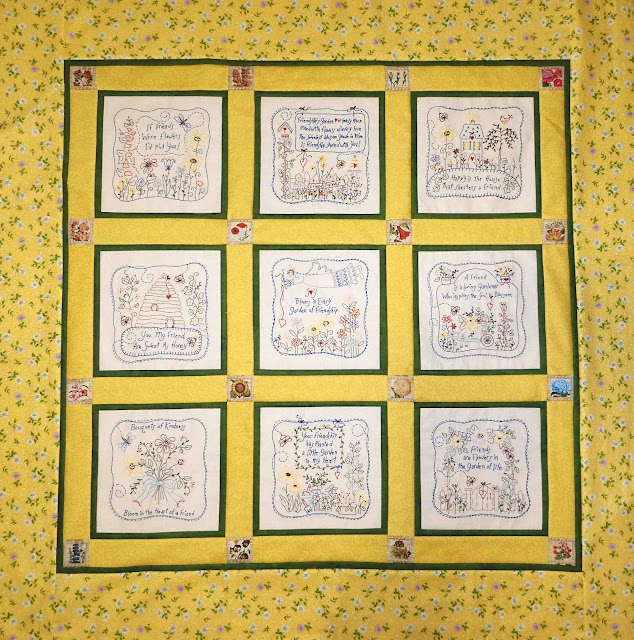 Probably, I'll use the yellow floral and the yellow from the sashings to piece together a back for it. I'm still mulling it over. It's a small quilt at 49 x 49 inches...small enough to quilt on my domestic machine. With Eliza gone to the shop, I'm casting my gaze toward the smaller quilts on the pile, and so some of them are getting quilted faster than expected. And this was my goal for this month's 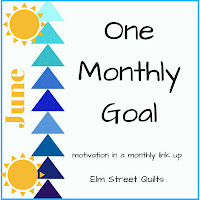 so I'll be linking up to the finishing party at the end of the month.
Also yesterday, I finished slow-stitching the Mariner's Compass block on the Appalachian Memories quilt. There's still a lot to do on this one, but it always feels like a little win when the quilt block is finished. 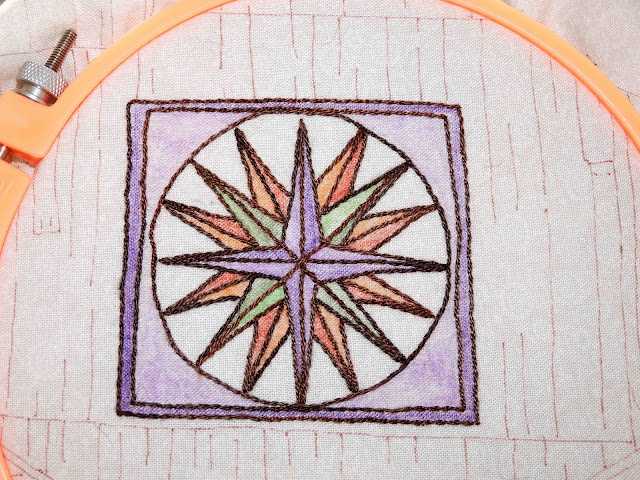 This morning I noticed a hummingbird at one of our feeders. 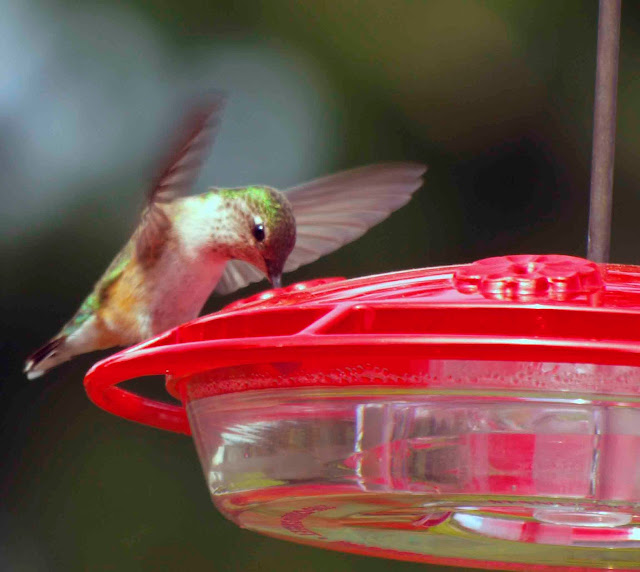 We have Anna's hummingbirds year-round here at the Three Cats Ranch. In winter, of course, there are fewer and so we leave one feeder out when we're not traveling. Sometimes we have to switch it out to give them one that isn't frozen over. In summer when there are more hummers, and they are more active, I put out a second feeder for them. It prevents "thug hummers" from dominating one feeder. One is out of sight of the other, and so they can't guard both at the same time. And all of that to say I've put out the second feeder. This one is located near our patio table so we can enjoy them when we're sitting outside.
Mike surprised me with dinner out last night. I was all set to cook, but he wanted to drive the car he'd been working on, and so he found an open restaurant with outdoor seating. It was very nice, and we found ourselves upwind of other diners again. All servers were wearing masks, and so we felt pretty safe. We observed the two hostesses using hand sanitizer each time they seated a group, and we observed the tables being sanitized when a group left and before another group was seated. Interestingly, the chairs (plastic lawn chairs) were sanitized only on the "seat" portion, and not on the arms, which seemed a silly way to do it. I'm not worried about catching the virus on my sit-down place, but I am worried about touching the unsanitized arms of the chair. We had our own little bottle of hand sanitizer for after we'd handled the menus, and we kept our hands off the chairs. Despite concerns, it was nice to get another evening out in a restaurant after such a long stretch of time.
Today we'll be doing some planting. I'm not sure how helpful I'll be with that since this is the deep-hole kind of planting. Mike is a better shovel-master than I. Also, I'm going to get the quilt back made and Friendship's Garden will go on the quilts-to-be-quilted pile. From there, I'm not sure what's next on my agenda. You'll know when I know.
Posted by Barbara at 9:00 AM

Love that flimsy--what a pretty quilt!! That yellow fabric on the border is such a lovely yellow--nice work.;)))
We haven't ventured out for dinner as yet...actually it has been too chilly here to sit outside for us...and we are just not ready yet...
I am trying to clam my fears of re-entry with my hand works...
Take care Julierose

We've had take-away but restaurants aren't open at the moment. I expect it will be difficult to get a table in the first few weeks of them opening. The flimsy is very pretty, great choice of fabrics for the sashing and borders.

Your Friendship Garden blocks look lovely assembled into a top, such a great idea to use those pretty flower blocks for the cornerstones.

The yellow is a really pretty setting for this. I don't dine out a lot, but have been supporting local cafes with curb side pick up. I have booked some small quilt group meetings in small local parks - quilters trying to ease back in. And we all need the social element.

Don’t you want to palm plant your head when you make an amateur mistake. It’s as puzzling as having leftover screws when you take something apart to fix then put it together again. At first you wonder then figure it out (or at least you hope you do). Big digs in the garden I usually leave for hubby too. My job generally comes in on the clean up end.

No seating in restaurants here either. We have done takeout a few times as we complete our 11th week of SIP. Curfew is lifted today so flashlight walk can continue. Still muddling through the days but being more productive this week versus the last 2 weeks. That’s a good trend.

Friendship Garden came together quicky! Love the yellow floral you used for the border. Congrats on a beautiful finished flimsy. I've gotten brave enough to start having one on one meetings in my office (but with both of us wearing facial coverings). But I do offer sanitizing wipes so the visitor can wipe down the visitor chair. We've not been brave enough to eat out here. Sounds like you had a great dinner.

A really pretty and bright quilt. Very cheering.
I am now self isolating....I really don't want to venture out amongst 'it'. Our weather has changed into cold and rain so I am 'spring' cleaning....again!!!

Yay for the finish of Friendship Garden, despite your chat with Mr. Seam Ripper. Hope your planting went well.

Such a bright and cheerful finish to your Friendship Garden. Wall Quilt or table topper? Either way lovely!

Such a lovely quilt... I love how the design really features the embroidery blocks!

Your quilt top looks great! I think yellow was definitely the right choice. Restaurants here aren't open for dining as yet - take out and delivery only for the near future. I'm not at all sure we will even go out once we're given the okay, at least not until we are certain there won't be a second wave of the virus. I do miss going out for the occasional coffee though (even though we have perfectly good coffee at home every day!).

So, Barbara, if both you and Mike were out working with hoes, would that be a hoe-down? What a sunny, happy looking quilt!

Beautiful quilt and congratulations on getting it together. Love the picture of the hummingbird!

I love that flimsy. The yellow fabrics make it so very cheerful. Out-door dining is supposed to start here in the next couple of weeks, but I think I will continue with take-out only for a while. I would have been very nervous about the arms of the chair. I know that all menus here will have to be individual use. Several of our favorite restaurants are doing a good job with take out. One was very disappointing and we haven't ordered from them again. I do like the break from cooking once in a while.

The flimsy is sweet and I'm sure it's pretty all quilted.

An absolutely lovely quilt(flimsy). I have embroidery blocks in the works, but may refer to your setting when I get ready to put it together.
As far as SIP here......everyone seems pretty much back to normal..and not even a new normal. Few masks on the workers and nearly none on the public. DH and I are often the only ones in the hardware store who have on masks. I am sad! We haven't eaten out. Just take out. Most restaurants are open for dining in, though fewer seated. Might be worth a call to the restaurant regarding the chair arms. Maybe the hostess just needs to be reminded. I had to do that at the coffee shop, way before the virus appeared, when the barista picked up my straw with his ungloved fingers, inserted it in my cup and then gave it a finishing tap with the palm of his hand. I called the manager when I got to my destination. Just lack of training, I think. Anyway, hasn't happened since.

Awesome work! I can't seem to get into embroidery, but should give it a go.

What a beautiful flimsy this is! Wonderful!

Lovely. Thanks for linking up with Elm Street Quilts One Monthly Goal and congrats on your finish.