All this talk of cherries ripening had me going. I got a bee in my bonnet first thing yesterday to try adapting my mother's cherry cobbler recipe into a dessert for two. Her cherry cobbler was probably my favorite dessert growing up, and I was smart enough to get her recipe before she passed away in 1997. It made enough cobbler to feed a small army. It was baked in a 13 x 9 inch baking pan. I made it just once for a potluck, and it was as delicious as I remembered it. But sheesh...such a big cobbler was quite a commitment for two people.
So all of that to say I started wondering how difficult it would be to turn it into a dessert for two. After sleeping on it, I came up with the idea to scale it to 1/3 and bake it in my trusty 6-inch cast iron skillet. And....ta-da!!! It worked! 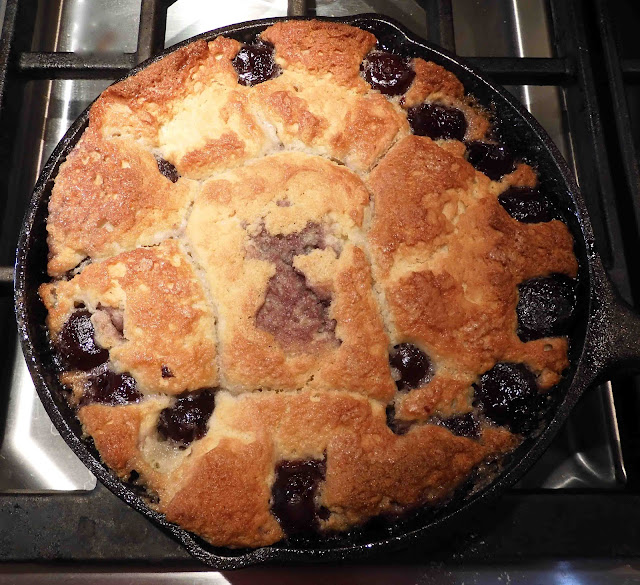 This was kind of a double treat because I used the last jar of the simple cherries in syrup I canned two summers ago...the one summer we actually got to harvest the cherries before the raccoons ate all of them. 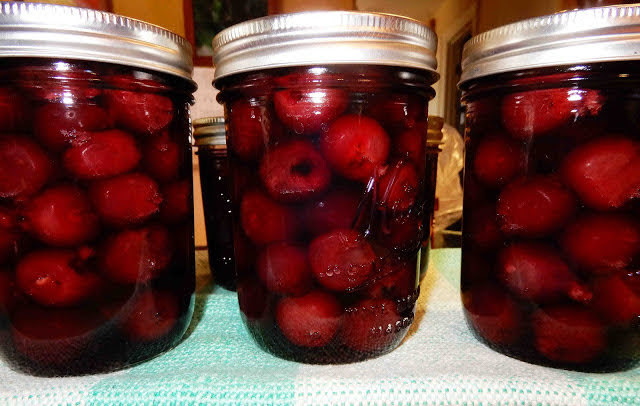 When I was growing up, we always had this cobbler with milk poured over it. Last night, we had it with ice cream. This isn't a good picture. We were in a hurry to dig in...I think my hands were trembling with expectation. 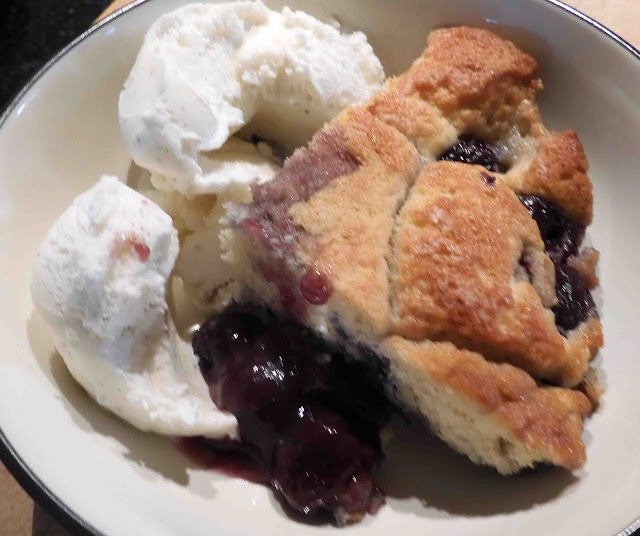 It's really a cobbler for four, which is cheating a little bit. It just means we two will have another serving tonight. Here's the recipe:
Skillet Cherry Cobbler for Two
adapted recipe from Estelle Martin (a family friend)
Serves 4
Ingredients:
1/4 cup butter, softened
1/2 cup sugar, divided
1 cup flour
2 teaspoons baking powder
1/4 teaspoon salt
1/2 cups milk
1 can (16-oz.) canned cherries or peaches in syrup, drained, reserving syrup
Water
Directions:
Preheat oven to 350 degrees.
Mix together butter and 1/4 cup sugar until creamy.
In a separate bowl, stir together flour, baking powder and salt.
Add dry ingredients to butter and sugar mixture along with milk and mix until smooth.  Pour into greased 6-inch iron skillet
Mix fruit and remaining sugar and spread on top of batter.  Mix reserved syrup with enough water to equal 2/3 cup and pour over all.
Bake for 35 to 40 minutes until well browned and bubbly.
My notes about this recipe: This cobbler recipe was from a friend of the family, Estelle Martin.  The recipe was handed down to me by my mother, Clarice.
Recipe is written for sweet cherries. Tart cherries may be used, but then add up to 1/4 cup more sugar to fruit. Canned sliced peaches in syrup may be substituted for cherries.
* * * * *
I love a good cooking day, don't you? I'm so happy to be able to enjoy this childhood favorite again, only now scaled down for the scaled up version of me.
Since I wasn't sure about the baking time, I wanted to stay in the room while it baked. If it started to burn, I wanted to smell it. It seemed like a good time to trace out the next embroidery project. When I decide to set the hand quilting aside for another rest, I'll get back to "I Believe in Snowmen," and I'll be doing the last three blocks. These three: 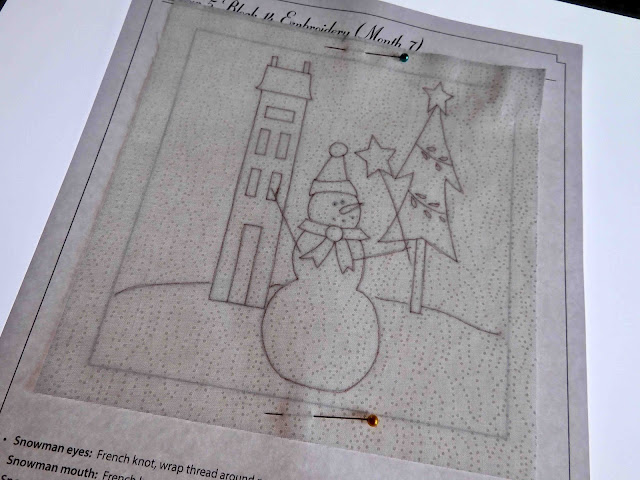 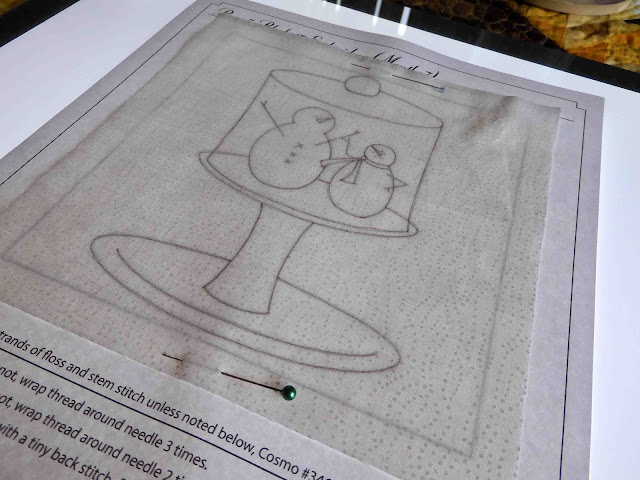 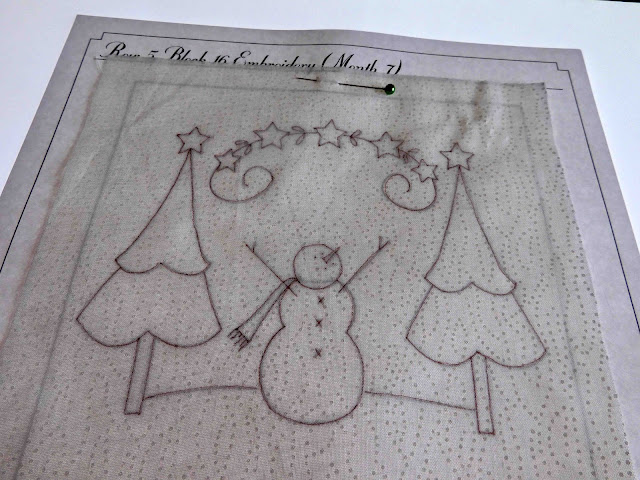 Mulligan Stew will continue to get my attention for another several days, and then I'll switch back to this redwork project.
Sadly, we're going to have to confine the kitties to the indoors again. We've had too many coyote sightings in the past week, and so it seems foolhardy to continue allowing them outside. Yesterday, Mike ran the ATV around through the woods and all around the property line. Then, he was outside with them when he spotted a coyote at the edge of the woods. So, it's inside for them for the next several months. The coyotes seem to come and go. We'll see them for a period of time, and then nothing for months on end. As the weather warms up, they move higher on the hill to stay cool, and vice versa as the weather cools off. It's too bad for the kitties, but I put them to work in the sewing room yesterday.
Smitty was giving me his input on the border question for Paintbox Pizzazz. 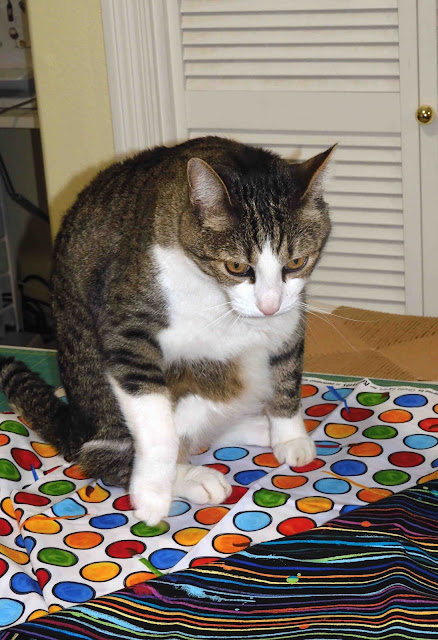 I'm going to use that stripe for the binding...it fits with the whole "paintbox" theme. Sadie was looking that over when Smitty called her to the other end of the table to consult about the quilt. 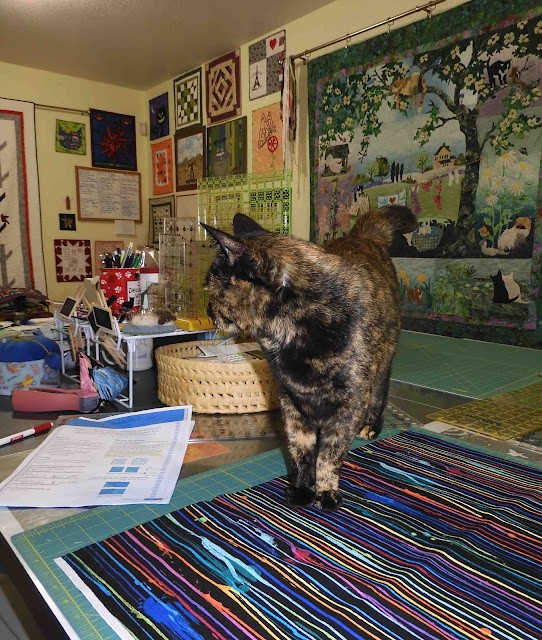 We all agreed that with a narrow black stop border, the paintbox fabric is a go for two borders. 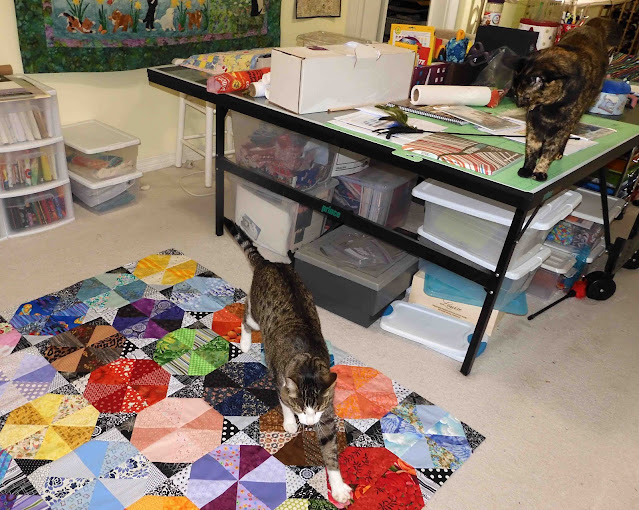 I laid it out with the rest of the blocks, now sewn together, and checked in with the Retired Resident Engineer. He's fairly conservative, but he liked the border too. I didn't think to take a picture when I had the fabrics laid out, so now you'll have to wait to see it when it's already a fait accompli. Like that? I took French in high school, but I cut class all the time, and so that's about the extent of my French. 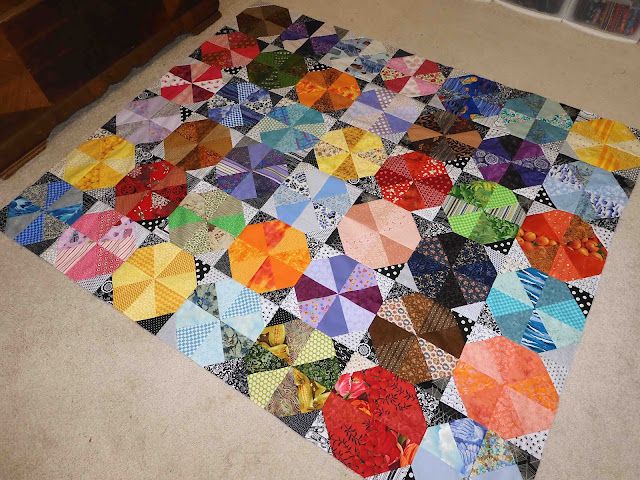 Yeah, so here's another picture of that binding fabric. I think I might have picked this up somewhere in our travels with this particular quilt in mind. 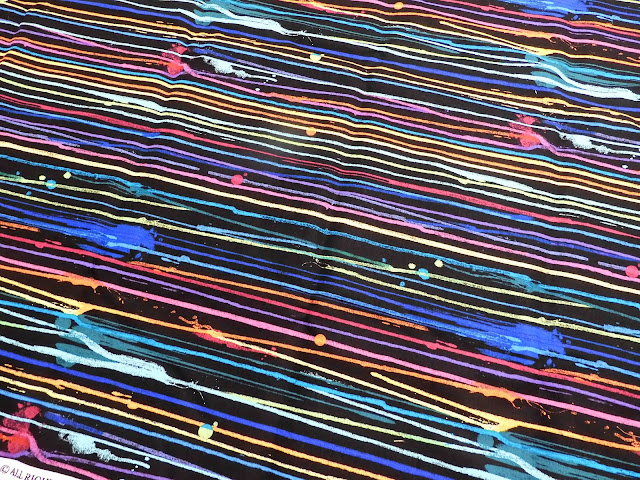 After all that consulting business, Sadie needed a nice warm sunbath. 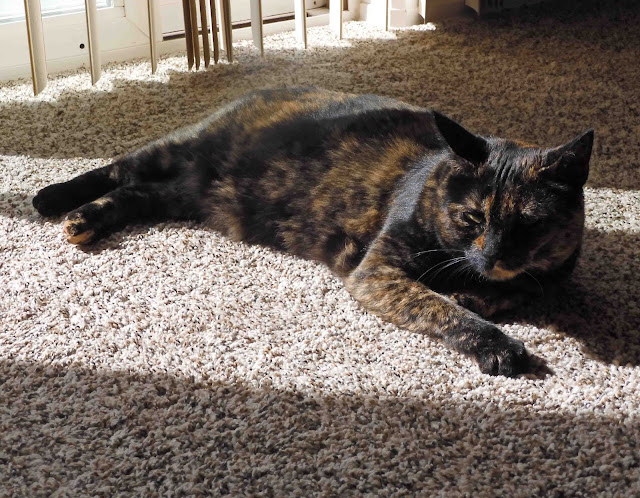 The clouds are moving in, and we're expecting rain today. The sun should return tomorrow. I need to get out and fill the bird feeders, and I might try to do a little weeding before I get back into the sewing room. Paintbox Pizzazz should be a finished flimsy before the day is over.
Posted by Barbara at 8:18 AM

I REALLY like the Paint box Pizazz quilt! There is something about it, perhaps all the color, that just draws me in. I know the kittehs are disappointed about losing their freedom, but better a pissed off pussy than a well fed coyote! Tough love at its finest!

We've sighted coyotes and a BOBCAT on Thom's new Trail camera overnight! Perhaps the squirrel and chipmunk population will go down ;)))
The cobbler looks really good...I will try that one with peaches as I have them on hand... thanks for sharing that recipe...
We had our big meal at noon today: Thom made himself some Stroganoff-like "glop" as we call it over noodles and i had shrimp fried rice...so no cooking tonight...
Hope the rest of your day is good...
Hugs from AC Julierose

Really pretty blocks and that is gonna make a nice border--
and that cherry cobbler looks soooo yummy!!
I like a good cobbler with a bit of whipped topping or ice cream on it too--
sorry my kitties have to stay inside--but we need to keep them safe--
have a great day--
luv, di

It's always good to have a lot of consultation on a project. LOE that stripe fabric as a binding! We've actually had less wildlife around the property - probably because fewer people are trespassing into their normal areas. We've had some real nasty thunderstorms and torrential rains the past few day (power out most of today) and supposedly hanging in our region for the next week or so - fun!

Thanks for sizing the recipe down. I have cherries, peaches and apricots are also here. I’m thinking this can work with fresh fruit, too.

Oooh, loving your selections on borders. That stripecis something I would buy just because. Cathy’s comment on cats had me laugh as well as appreciated the danger your babies are facing.

Well, how frustrating about the coyotes, for you and the kitties. I know that quilt turned out really well, and I love the binding fabric you've chosen! I'm going to keep that recipe in mind, since John loves anything cherry and a recipe for two would be perfect. Thanks for sharing. It is raining buckets here today, with rumbling thunder and lightning. It's been going on all night and we have flash flood warnings going on. Any walking will be indoors today.

Thanks for the recipe the cobbler looks great!

I really like the Paintbox Pizzaz pattern. Is there a link to the pattern? I think I would enjoy making it.

Oh no - coyotes in the area aren't a good thing when it comes to kitties! Hopefully they move along soon but in the meantime perhaps they'll take over on the squirrel patrol. That cobbler looks delish! I would make it with sour cherries though because I love them the most...with no added sugar (or at least only a little bit). Yum!

I love that interesting stripe you found for your Paintbox quilt. Kind of like different colored sparklers!