Since Eliza is on an extended vacay, getting her mind right after running over a plastic template, I'm quilting on my domestic machine for the time being. It's disappointing not to be able to continue on and finish the Shop Hop quilt, but its day will come too. For now, I've been working away at the Tiny Trees quilt. Yesterday, I finished quilting snowflakes into the background. 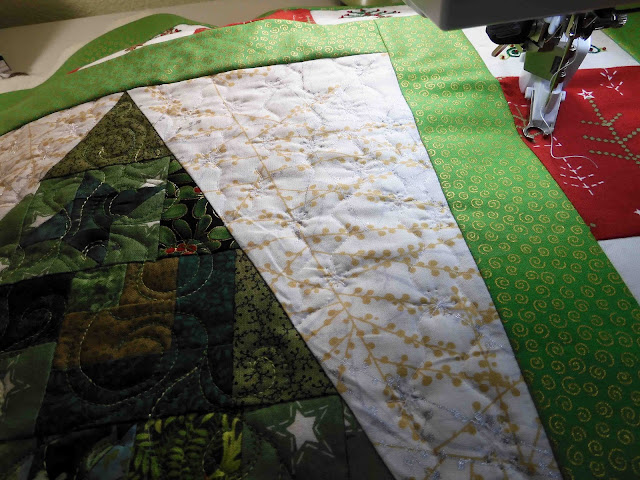 As I've mentioned, the white thread I'm using for the snowflakes is a white metallic. I have some tricks to using metallic threads successfully for free motion quilting, mainly massaging some Sewer's Aid into the thread and using a thread stand to give it time to relax and unwind on its way to the needle. For some reason, the right side of the quilt wanted to give me trouble, and so I switched to a regular cotton thread when I quilted some Christmas presents under the tree on both sides of the tree trunk. 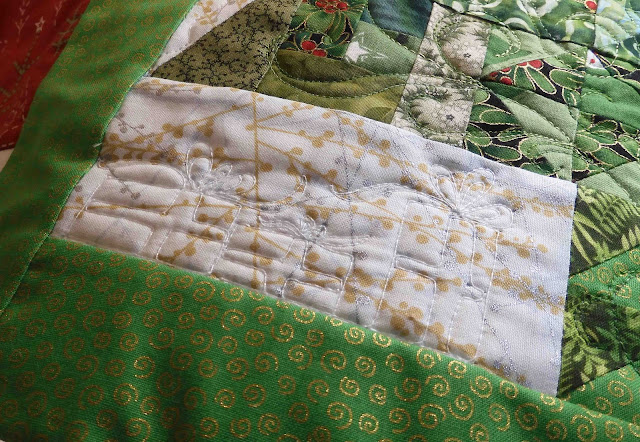 From there, I switched back to the variegated green thread and quilted a holly garland around the first green border. After that, I switched to a red variegated thread to stitch some swoopty-whoopty Christmas trees into the red blocks. ("Swoopty-whoopty" is a technical quilting term, in case you were wondering.) 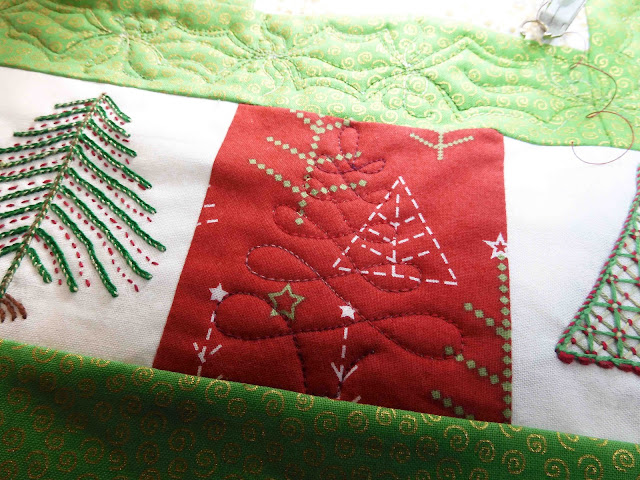 I looked at the white blocks with the embroidered trees a long time before deciding to leave them alone. I couldn't come up with a design that would work for all of the blocks. Also, the embroidery is really the thing, and so I worried any quilting I did there would detract from the embroidery. So you can see how far I've come in the image below. 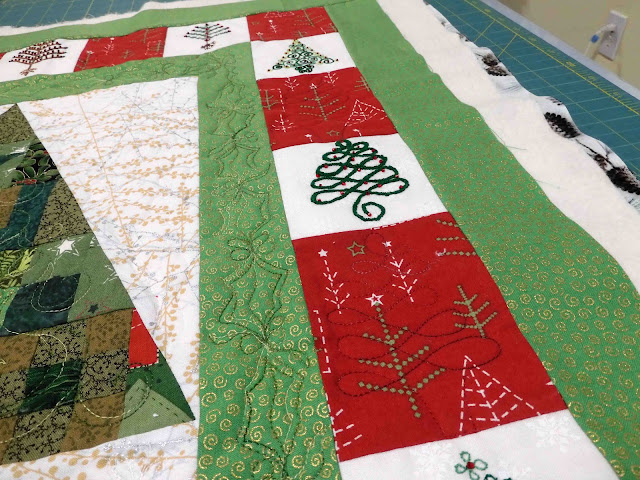 Just the outer green border is left to quilt. I'll do another holly garland there, and then it'll be ready for binding. I'm thinking I'll probably baste around the outside edge to keep that border from curling up as I stitch the holly garland. 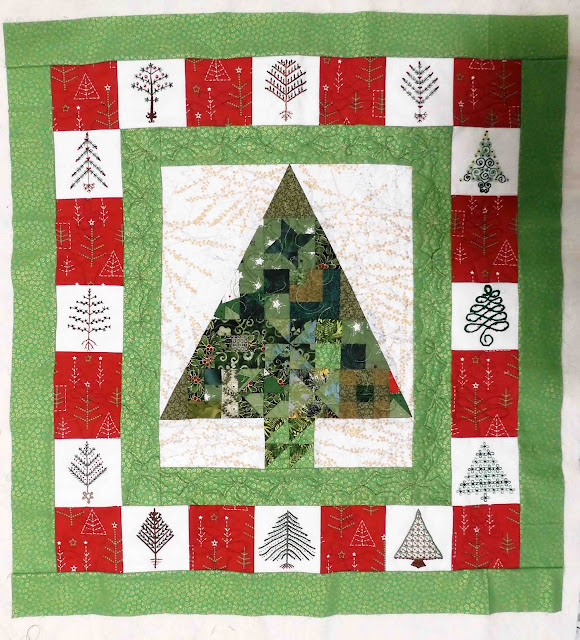 The only other thing I did in the sewing room yesterday was to make up the 10th of the Snowflake blocks. You might remember I was working on these while we were traveling. This one will be stitched in blues. I'm making half the snowflakes blue and half will be a pale aqua. 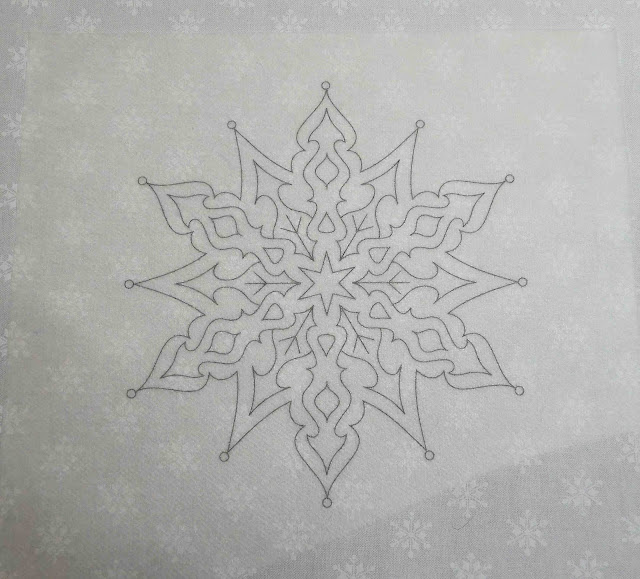 There will probably be time to start the stitching on the snowflake today since I'm nearly finished with the second Pieces of the Past blocks. There's just a little bit left to stitch at the top. 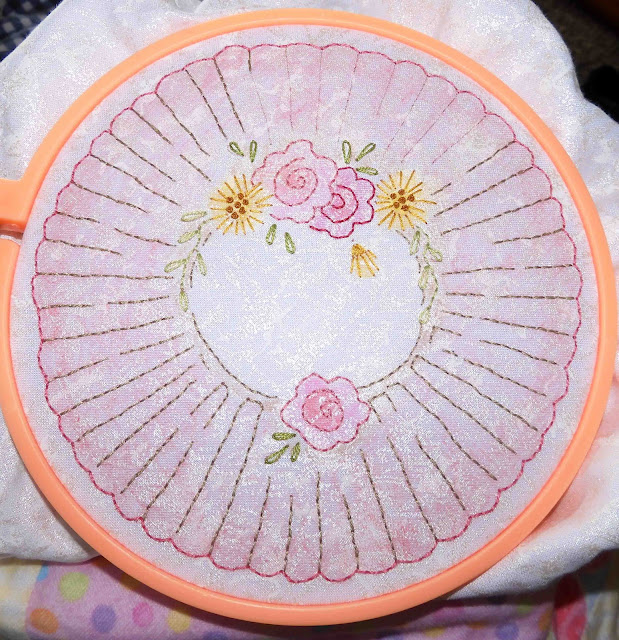 During a rain break, I took a walk around the garden. A third poppy has opened. 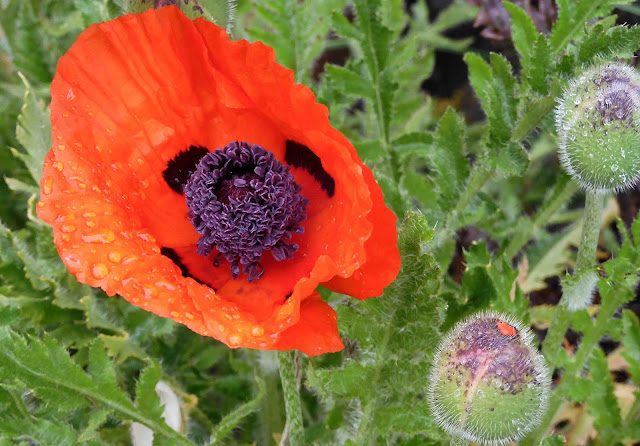 The first peony has not. I noticed the guard petals have pulled back a little bit, and I can see the flower petals inside. Sorry for the blur, but the raindrops are nicely focused! 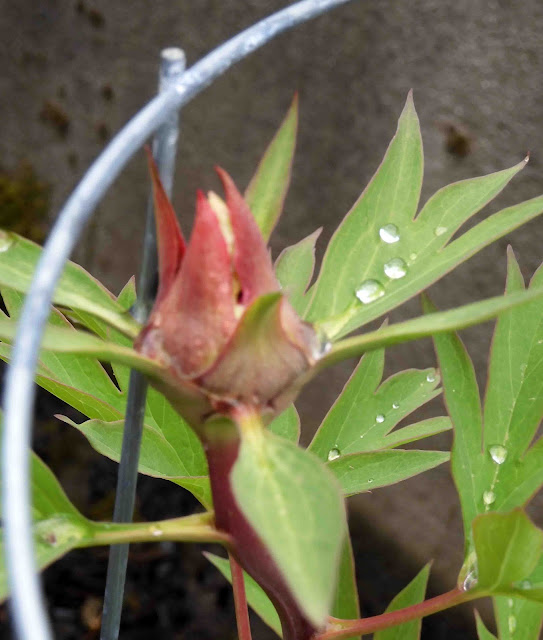 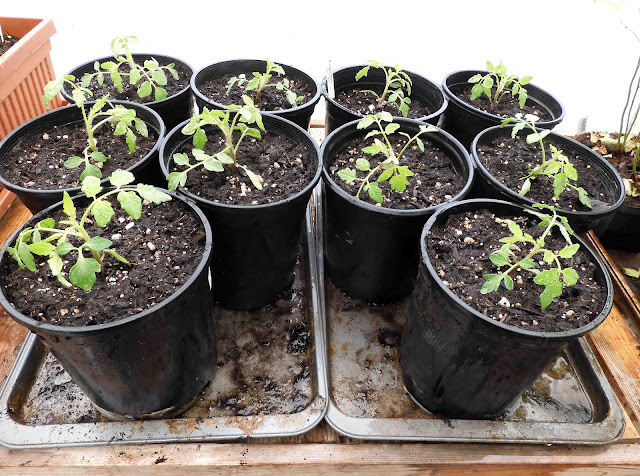 The cat grass is nearing the point where I can safely put it out on the catio for the kitties. 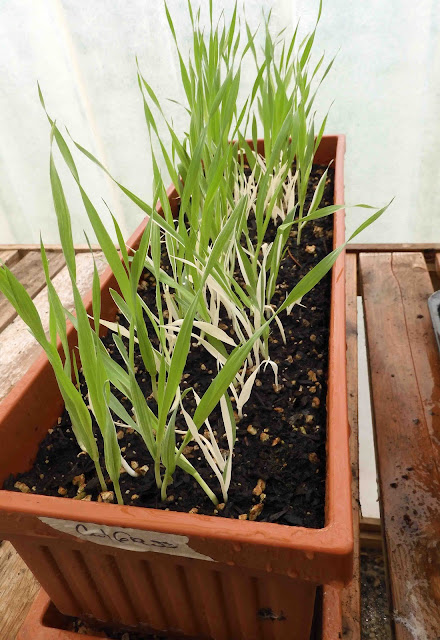 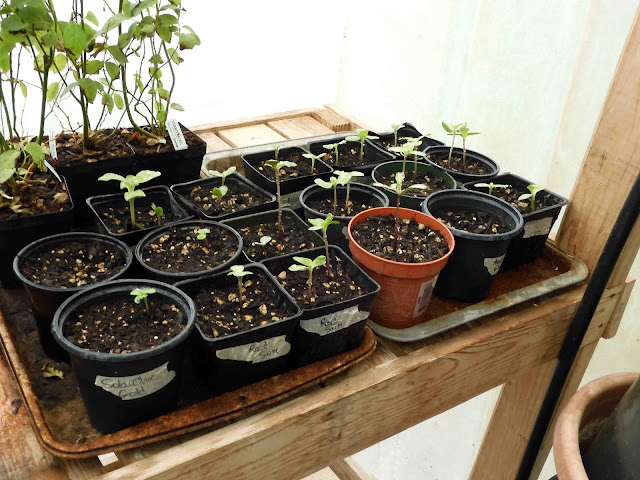 You can see the blueberries in the upper left corner of the image above. It's probably going to be a while before we can plant them in the ground, and so I'm going to repot those into larger pots in the meantime. They can sit outside and enjoy the view while we clear a space for them on the back side of our garage. Two big butterfly bushes need to be removed, and that will be a big job.

While I was in the greenhouse, I noticed the squirrels had been digging in the lettuce again. They somehow did away with one of the starts in the back of the pot on the right. GRRRRRRRRRRRRRR!!! You might recall that Mike filled in their tunnel with gravel and poured ammonia into it, then covered it with a brick. No problem. The squirrels just dug right next to the same hole. 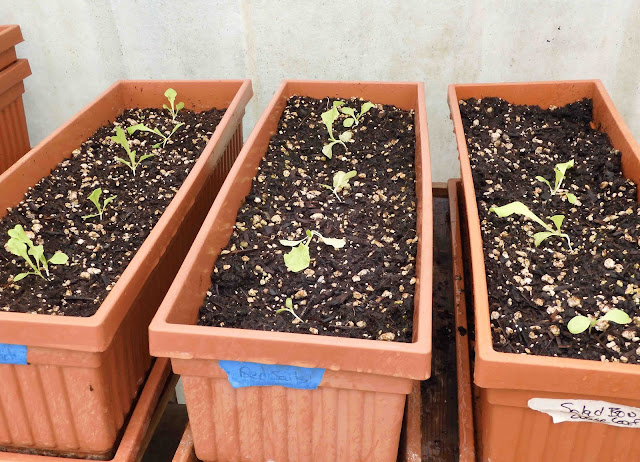 So now, he's laid a big piece of lumber over the area and put a brick on that. If that doesn't keep them out, we really will bring in the big guns in the form of a live trap. Live...for now...because they won't be alive for long. We considered poison, but I worry about the kitties getting a hold of one after it's eaten the poison. I hate to do it, because we try to live in harmony with our wildlife. On the other hand, the wildlife needs to meet us halfway. 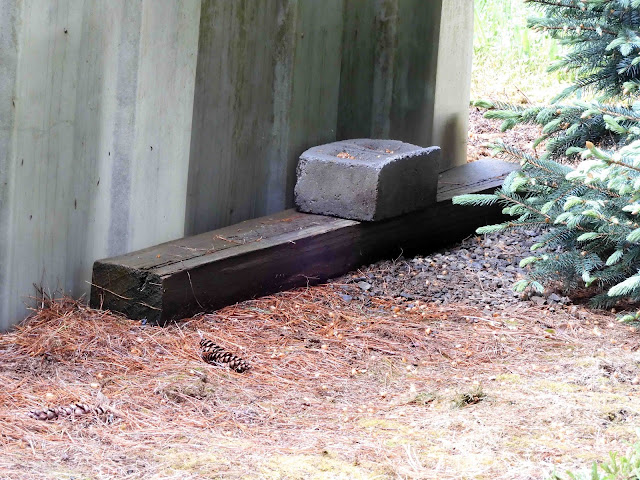 So Smitty was with me on my rounds yesterday until he heard Sadie crashing through the junipers. 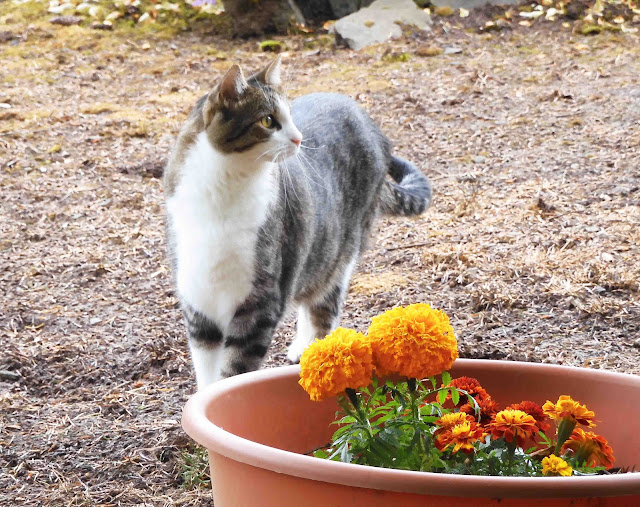 She was on her way to the door to be let in. I love that pausing paw. 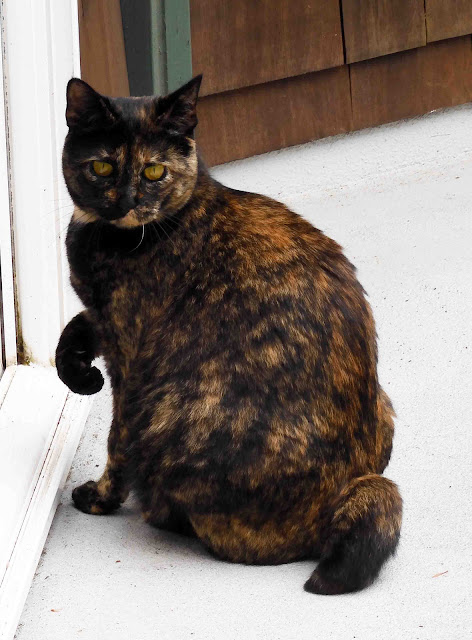 When the rain started up again, both kitties decided Mike's lap was the place to be. It's something of a miracle when they'll both sit on a lap without squabbling. Smitty was there first. Rest assured, he gave her a good dose of the stink-eye, but then allowed her to stay. 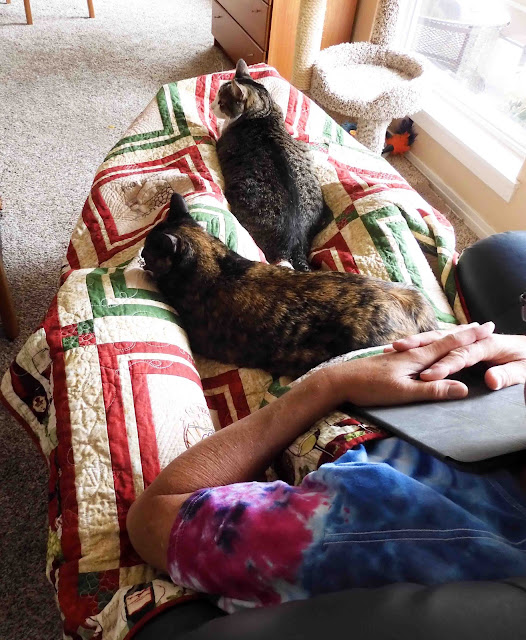 Shortly after I took that picture, they all fell asleep. Not a creature was stirring, especially the mice.

So, today I'm going to repot the blueberries, and then I'll get back to work on the Tiny Trees quilt. I'm hoping to have it ready for hand-sewing the binding by day's end. Also, it should be short work to finish off the Pieces of the Past block. I'm looking forward to getting back to the snowflakes.
Posted by Barbara at 7:59 AM

Hi Barbara, I love your Christmas tree quilt! How do you stitch the holly? Do you draw it and then stitch?

As for planting seedlings and bulbs, I learned to use medicated body powder. I sprinkle some in the hole and then over the seeds before covering them with soil. For bulbs I usually sprinkle the powder on them and then plant them. It does keep the squirrels, chipmunks and bunnies away and it does not hurt the plants. I learned about if from Jerry Baker - Master gardener. :)

Beautiful quilt and quilting. Those darn squirrels keep planting acorns all over my yard and I keep having to pull them up.

Barbara, your swoopty-whoopty trees are wonderful. I like that description, it is perfect. Your quilting really complements the quilt. Sorry the squirrels are messing with your plantings. I am looking forward to seeing the latest snowflake. Pieces of the past is really pretty.

I've scro!led into yesterday... Seeing the picture of the injure d Liza, makes me cringe horribly. For you and for her. I'm so sorry.
It's nice to see all the growing things.
Spring is my favorite season.
Thanks for all the wonderful pictures and if adorable Sadie. Let us not forget the majestic Smitty.

Good luck with keeping the squirrels out of your garden. Our biggest garden threat, besides deer, are our own chickens. They keep taking dust baths on top of my flower and herb seedlings and have pulled out and eaten all of my herb seedlings. The nasturtiums were quite a treat. I put tomato cages up on top of the seedlings to deter them, but no luck.

Battling the squirrels is constant, isn't it! I hope you can encourage them to leave your crops alone. Hope you get Eliza back soon.

Nice work on the tiny trees quilt. I like that you combined the two projects. Squirrels can be a regular pain in the you-knpw-where, and so incredibly destructive. I'd be as frustrated as you. This year, I may plant tulips and daffodils, but highly expect that it would just be squirrel food, so I'm still thinking on it.

I had a problem with my doxie digging under our fence. We got a roll of chicken wire, and buried some strips under the dirt. They hate the feeling of the wire under their claws. It might work around the greenhouse.

Great quilting on the trees quilt. I have the green with gold swirls fabric.

Your quilt is lovely! I'm so happy to see those trees used in such a beautiful way! :-) I hope you enjoy stitching that snowflake, too!

Completely jealous of your potted work. I haven't been able to get much starter stuff going this year. But we have two orange poppies up at the moment, and some darker red ones promising to make an appearance pretty soon. I'm hoping that the rest of the poppies make an appearance before the irises fade - the combination is stunning. Rumor has it we'll have sunshine today for a change. I can't wait to stroll the yard and see what else is developing.

Looking forward to seeing the finish on your tree quilt!

I hope Eliza enjoys her vacay, even if you don't. :(

Danged squirrels! Sheesh. I know you've already put the traps out by now, but you're right, they should meet you half-way.

I LOVE that red-orange Poppy with the beautiful purple puff! Wowza! And the pics of Smitty & Sadie - saweet! (Same with them together with Mike too)