It was a better day yesterday. Things fell into place more easily. I didn't get any sewing done, but I got a whole lot of slow-stitching accomplished. Also, a crew showed up to wash and wax the RV much earlier than we expected them, and they had the whole job finished in less than two hours. The RV is looking good now.

While they were working on that, I was finishing off the second snowflake. It's hard to get it pressed nice and flat with my travel iron, but here's how it looks: 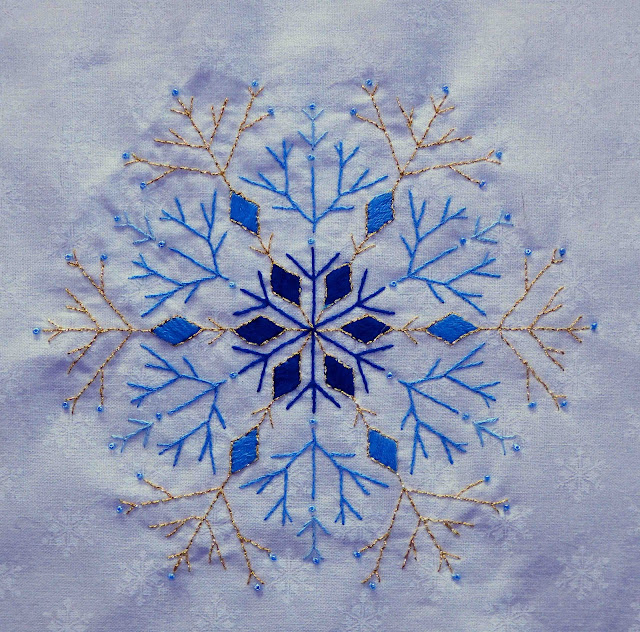 I worried about ironing over the beads for fear they would melt. And so I took one out and held the iron over it for ten seconds...much longer than would ordinarily be necessary. It was fine. They are made of glass. The beads are Miyuki Rocailles seed beads. They were purchased from a company called Fire Mountain Gems. They've given me good service so far, with fast delivery.

Everything was put away when I realized I'd left off the hot fix crystal in the middle. So everything came back out and it was finished off once and for all. 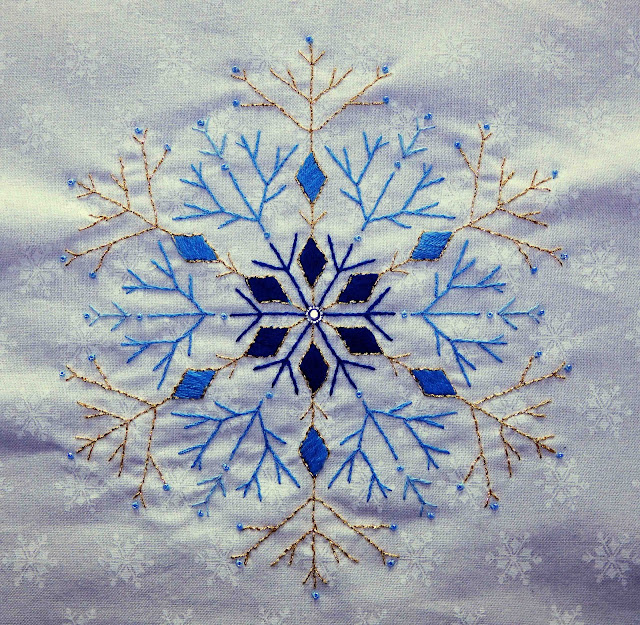 As long as everything was out, I made up the third snowflake. This one will be done all in blue floss with some metallic blue included. The cut-off corner in the lower right is where the red ink appears, and that was cut off along with the other excess Sticky Fabri-Solvy. 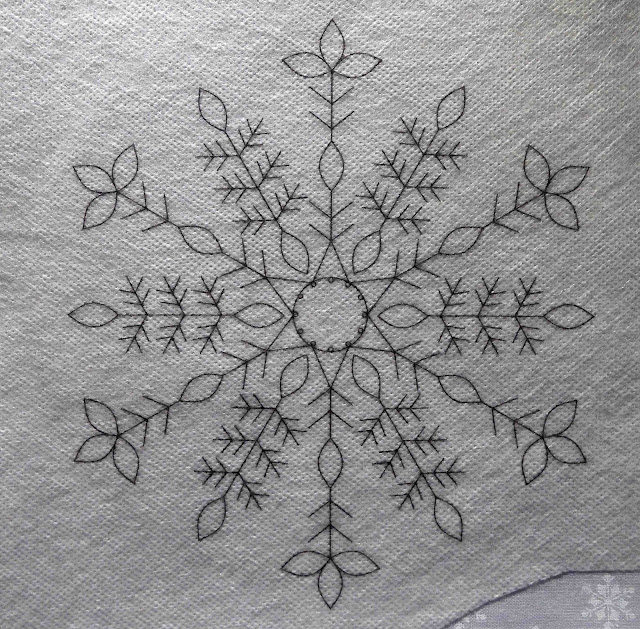 The plan was to get back to my hand-quilting, but I might go ahead and do this third one first. They stitch up fast. They're addictive...like crack in the form of hand embroidery.

Also, I was able to get the pattern for February's International Embroidery Month Stitch Along with Crabapple Hill Studios printed off...correctly oriented this time. Yay! 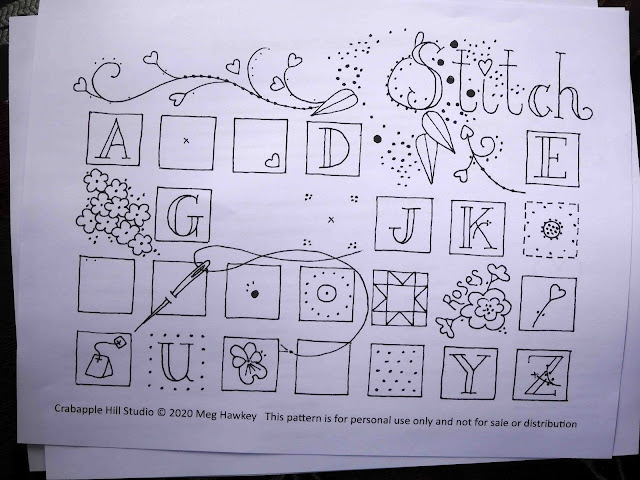 The instructions would have us coloring this with colored pencils, but I'm using crayon this time around. I had to fudge a little on the colors, but it really doesn't matter. 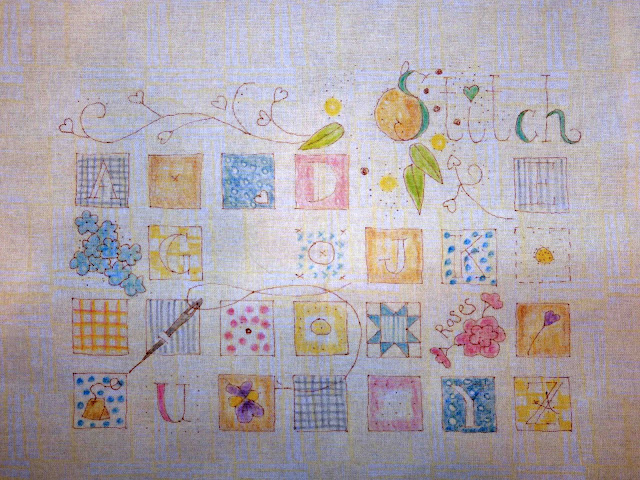 Now it's all ready for stitching, but the stitch-along doesn't start until February 1st. It's hard to wait because this was a lot of fun last year. No doubt there will be some challenging new stitches involved. You might remember last year's stitchery. I turned mine into a little quilt and hand quilted it while we were traveling last year. 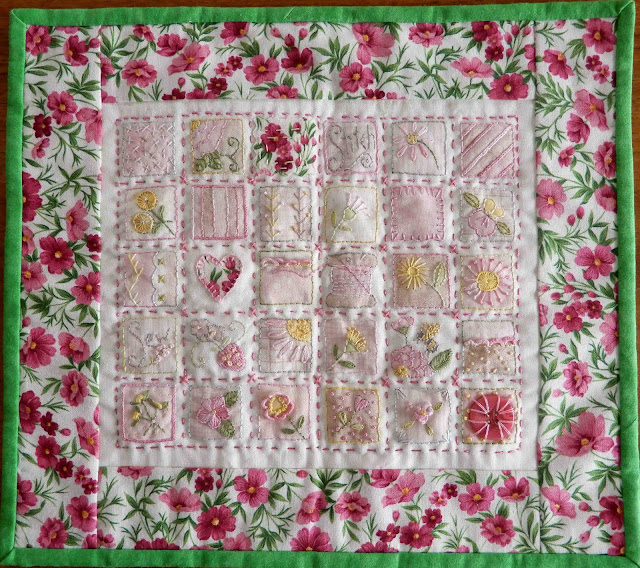 Now it's a little quilt for the fabric dolls who live in a doll bed at home. 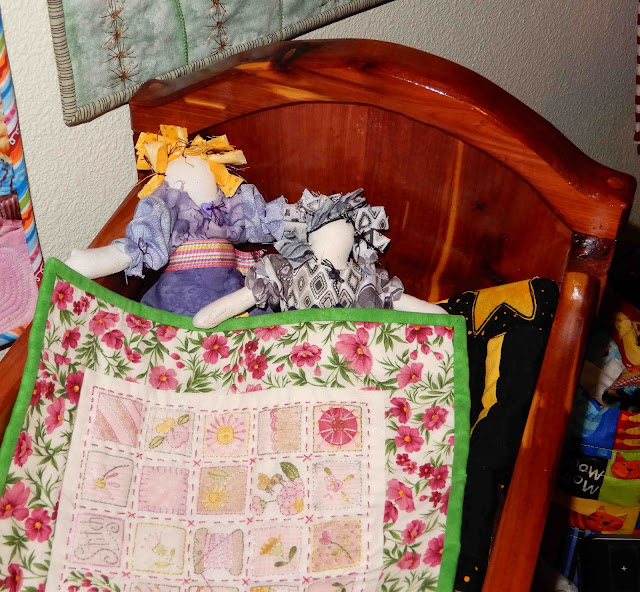 Mike crossed a few projects off his to-do list, and I made a lasagna for tonight's dinner. Mike's sister Meredith will be visiting this afternoon. I'm also going to make a little Dutch apple pie for two before she arrives. The little pies are really a little too much for two, but not enough for four. For three, it should be like Goldilocks...just right. We have some vanilla ice cream, and so that will be a nice dessert.

The next two days will be busy between Meredith's visit and the quilt show tomorrow. I should have time for sewing on Friday. I still have high hopes of getting my January OMG project finished before time is up.
Posted by Barbara at 5:56 AM

Love your snowflakes, and your new stitch along.
I am really curious about the "dutch applepie for two"
We only make huge applepies. (lol)
Greetings Tilly

Beautiful snowflake--I also downloaded that stitchery--am anxious for my shoulder to heal so i can begin..will be picking out floss right now...hugs, Julierose

I love the snowflakes you are stitching. They all are beautiful. Hope you have a great visit with Mike’ssister.

Love those blue snowflakes--great stitching job!
and am happy to see you finally got the Crabapple hill pattern printed off and even all ready to stitch--good for you!!!
I was so surprised today when I got my new lightbox in the mail already--just ordered it on Monday and they said it would be next Monday before I got it!!! I also picked up 4 new colors of pencils yesterday at Micheals--but only 2 of them will work for my colors--rest I have already--so now I have to get it traced and colored in--and as I am doing the colored pencils I will have to use that 'stinky' stuff to set it--so will wait for a warm (it is very cold here in Fl this week--hopefully over the week end or next week) to go outside at one of the tables in the patio and paint it and let it dry while I do some handwork--luckily we still have 10 days before we start the stitching!!!
have fun with family and at the show--
luv, di

Love the snowflake. I do so admire your embroidery skills. Wish mine were up to par so I could try the crabapple hill stitch along. Oh well guess I will stick with piecing and appliqué. I find it interesting you found a crew to wash the RV. I had no isdes such services were available anywhere, pretty cool. I hope the weather holds for you, enjoy your visitor and the Quilt show. I hope they allow pictures so I can follow along too. The Road to California show is one I am sure I will never get to visit, except thru your pictures.

Those snowflakes are so pretty; perfect for stitching while on a trip! Hope you three had a good visit!

Love your little quilt! The snowflakes are WOWZERS!


I love the snowflakes but opted for the little trees embroidery. I really want o get the snowflake patterns but being realistic I won't get to make them for years to come.