If you've been following along, then it should come as no surprise that I finished a quilt top yesterday. Mulligan Stew was started April 15, 2013, and so it feels pretty good to finally have a finished quilt top. 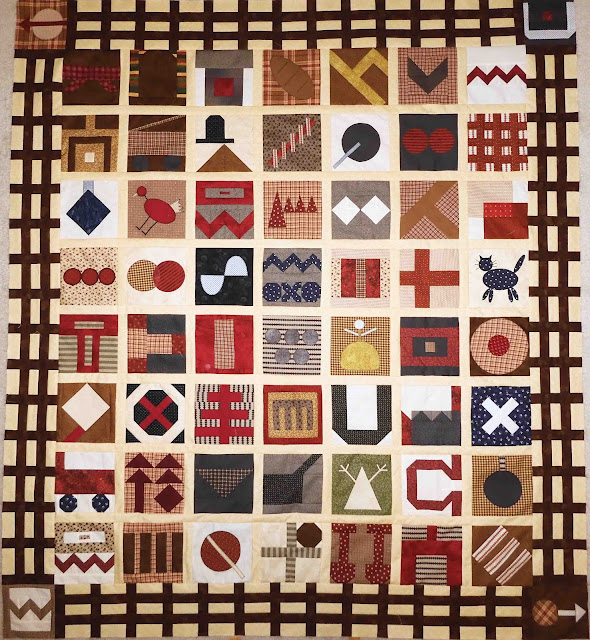 It took a long time because, in my rotation of projects, I only worked on this five quilt blocks at a time. There are 60 blocks in all, and so the sheer number of blocks made it a long-term project. Also, some years back, I felt overwhelmed by the number of projects I had in progress. My temporary solution was to cut down the load to about half by putting several of them "on the back burner." Some were never restarted because I'd lost interest in them along the way. This one, however, was too far along. Besides, it was interesting, and I wanted to finish it.

Probably, I'll hate myself for this, but I've decided to big stitch hand quilt it. It will mean even longer to a finish. It's from an era though, and so hand-quilting seems like the best way to complete it. Optimistically, I've already made the quilt back and cut the binding strips. I'll use the same dark brown for the binding. Today I should be receiving a coffee brown #7 Perle cotton to use for the quilting. It'll go into my regular rotation of embroidery projects, and I'll work on it a little at a time. Since we'll be heading south for three months, there should be plenty of time to work on it then.

Instead of baking, I picked up Tree #9 and started stitching on it. This one is worked in chain stitch and stem stitch with one strand of floss in three different shades of green. I'm working with sections of a variegated floss, and so my greens will span about five different shades. It was this far along when I stopped for the day. 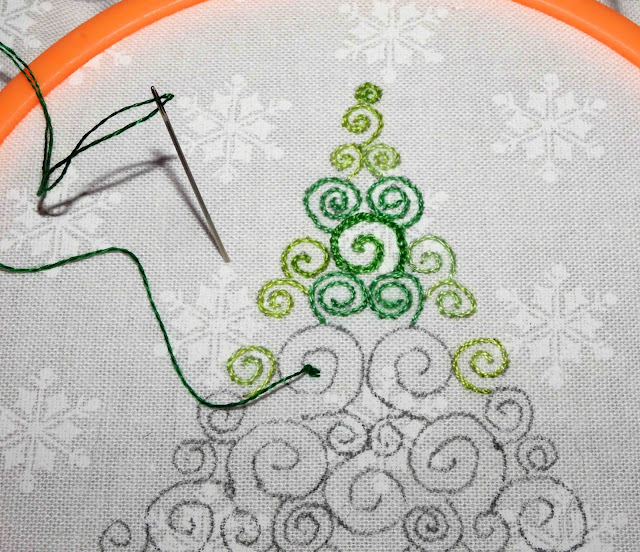 This morning I worked on it some more, and now it's this far along. 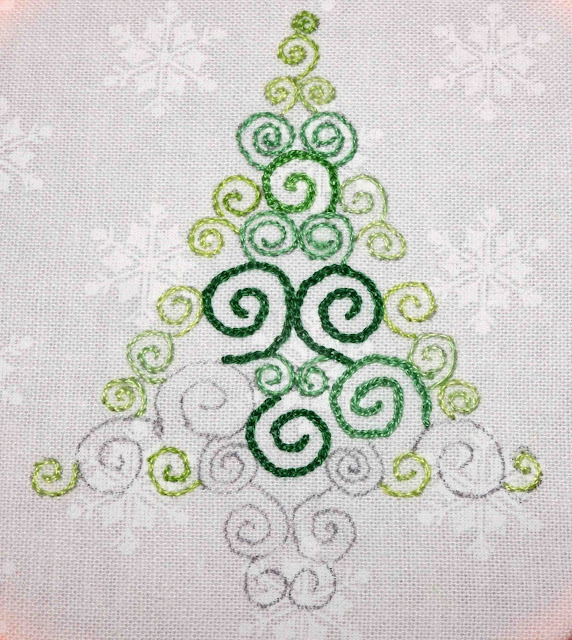 There will be a red bead placed in the center of each little curly-cue. Possibly, I'll work on it a little more this afternoon, but probably not. It's more realistic to think I'll be able to finish it off tomorrow morning.

Today I'll start free motion quilting my second oldest UFO, It's Raining Cats and Dogs. This quilt was started in December of 2013. It was put together one applique quilt block at a time. While I was working on it, I found myself embarrassed that a whole year might have gone by between one quilt block and the next. Finally, not too long ago, the quilt top was finished. And now...at long last...it's going under my needle for quilting. 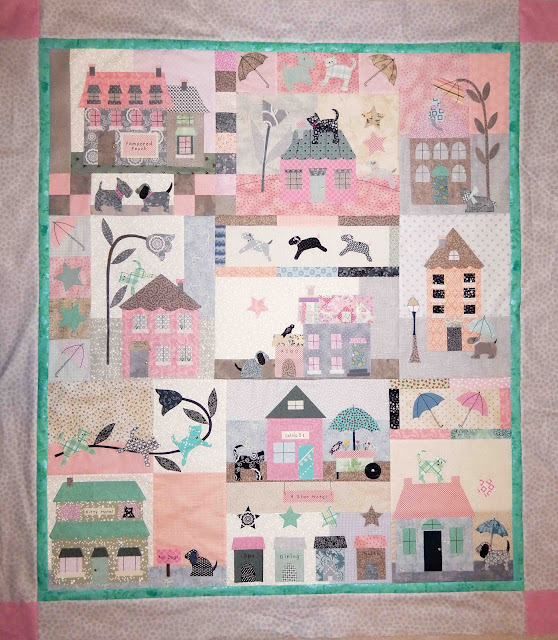 This is my goal for this week's #onethingwithamy and it's probably an ambitious goal to finish in one week's time. Still, I'm going to give it a go. If I can get it to the binding stage by next weekend, I'll be one happy quilter. It'll be good to get these oldest of the old UFO's off my to-do list.
Posted by Barbara at 9:27 AM

I think the border turned out perfect for Mulligan Stew, Barbara. It really fits the theme.

Mulligan Stew will look lovely with hand quilting, and if you do big stitch in something like a Baptist Fan pattern it will go faster than you'd think and give it a wonderful texture. I love this current tiny tree you're embroidering, so delicate with its swirliness (is that a word?).

Oooh, I really like the swirly tree - and the red beads sound perfect for it too!

I think the "flopping around on the couch" is a vital part of the project. It signals completion to your brain and allows the internal switch to flip from UFO to STIFLED (Satisfying Thing Is Finally, Legitimately, Entirely Done.) The "S" in STIFLED can be a number of words, but I hope this one is Satisfying because it looks great!

You did a great job on the finished top for Mulligan Stew; I like the look of it very much. That little tree just might be my favorite. I love the curly-cues and the varied colors of greens. Couch flopping is good mental floss, I think ;-)

You have new mental space! After finishing the Mulligan Stew and looking at Raining Cats and Dogs to finish, you can dream BIG on that next project. Are you thinking of going back to your ways of starting new projects in a sequence? That was an amazing challenge you took on. You are now wrapping those starts up into finishes.

I finished a "top" yesterday, too. It was a garment :). It is my wearable muslin for a wine dinner at Yosemite the first week of December. The top will be packed for the trip along with the dress. I do not wear dresses to speak of but it is a fancy dinner so thought I would give it a go.

I love the trees and look forward to seeing the cats and dogs being quilted.

Nice finish. The borders worked out great for it.