"Wow" was the word of the day yesterday. And I guess the idiom "third time's a charm" fits here as well since it was the third time we'd planned to visit the park, but only the first successful attempt. It was so vast and deep, it was difficult to capture in photographs, but I did my best. Really, you just need to add this place to your bucket list if you haven't visited already. 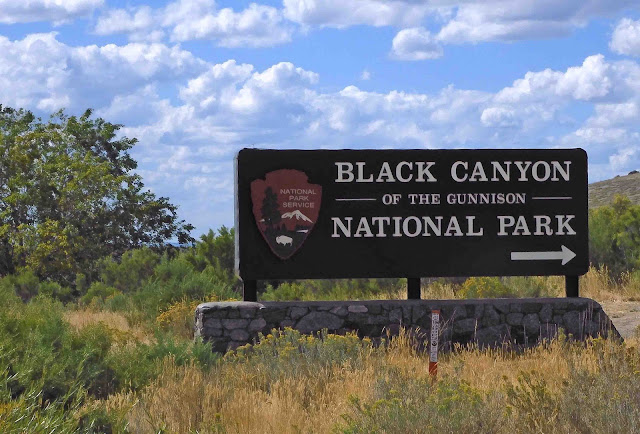 We first stopped off at the visitor center. There were no shot glasses, but I picked up a refrigerator magnet. This isn't the one I chose, but I liked it anyway. 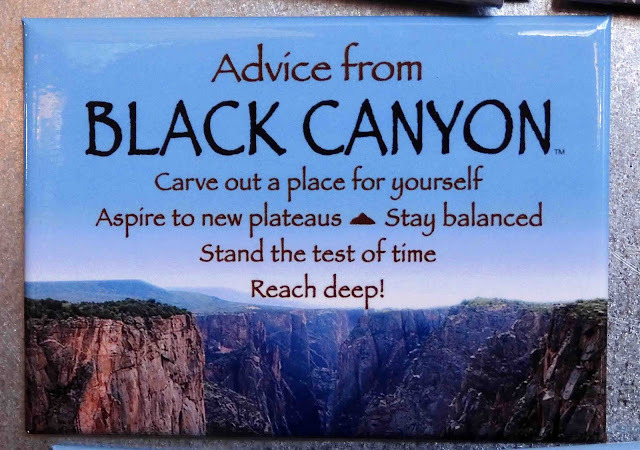 There were three hikes we could take from the visitor center, and we chose this 2-mile loop that descended 400 feet into the canyon. To go deeper, one needed a wilderness permit.

The trail started out easy enough. We were walking through stands of scrub oak. 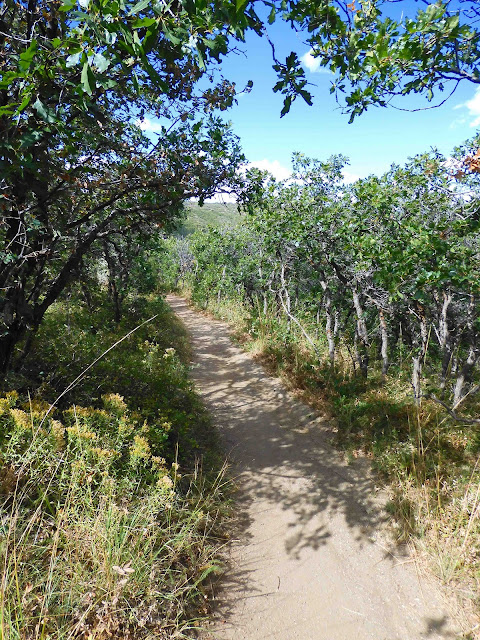 As we descended, it grew more rugged with rocks and roots ready to trip us if we didn't watch where we put our feet. Also, the trail was quite narrow, with no handrails and a steep drop-off on one side.
In the image below, Mike was pointing to a cliff right beside us. 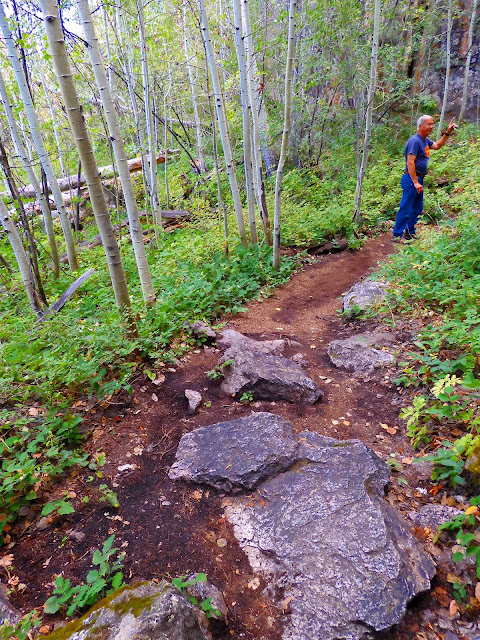 It was a wall of rock, straight up, and immense. 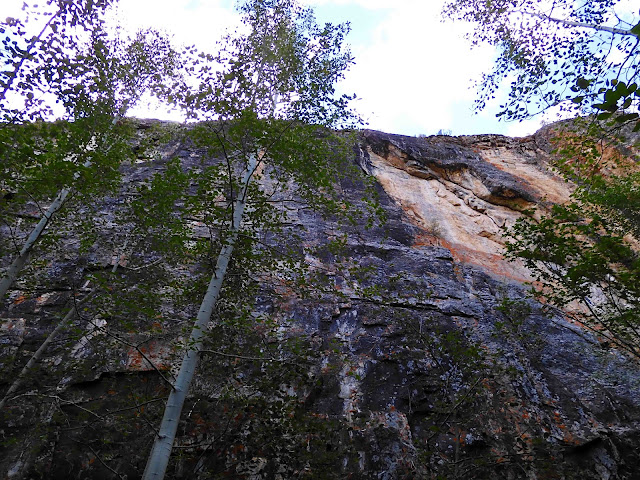 The views of the canyon from the trail were a little disappointing overall. If I were to do this again, I'd stick with the half-mile scenic loop that started at the visitor center. Nevertheless, we enjoyed our hike, and certainly we could use the exercise. Surprisingly, the 400-foot ascent back out of the canyon wasn't too bad. We sat a couple of times and admired the view. 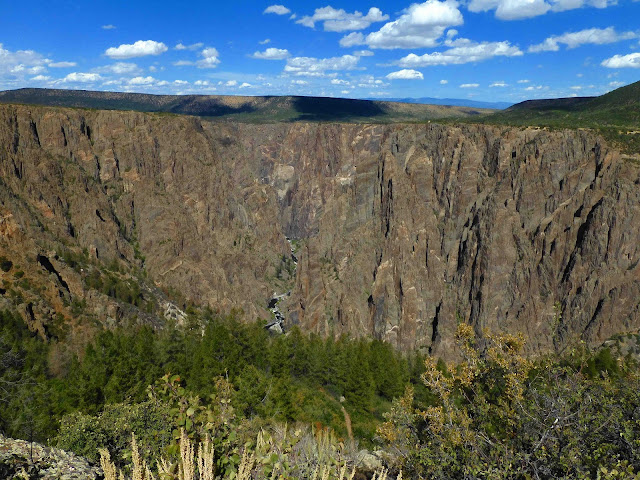 Near the end of the loop were the best views of the canyon, along with a sign about the geological forces that shaped it.

From there, we could look down, down, down into the very deep cleft cut by the Gunnison River below. 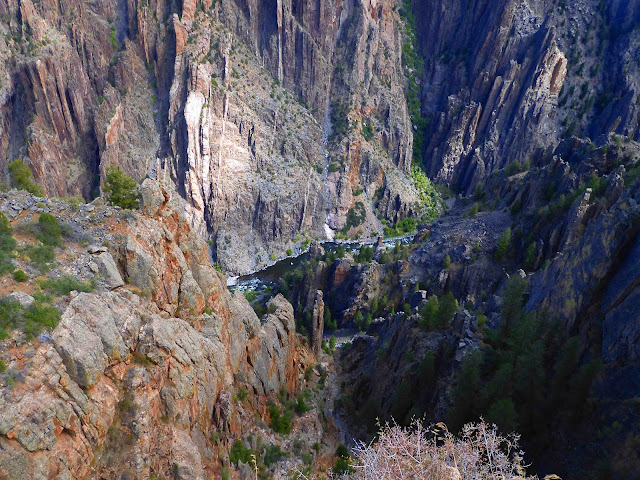 We crossed over three of these narrow board bridges on the ascent. 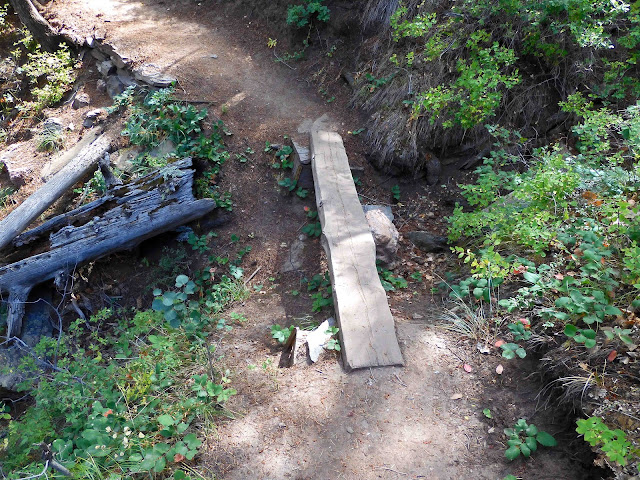 When we reached the top, we took the half-mile nature loop that started at the visitor center. The view of the canyon were much better from here. 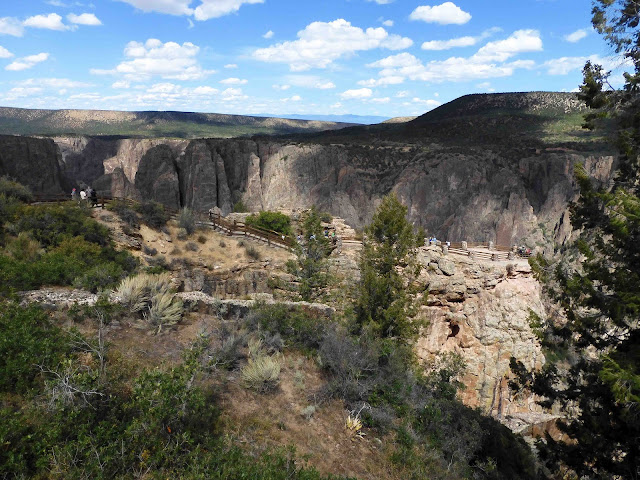 And, honestly, every time we moved to a new place and looked again, the only word we could say was "Wow!" 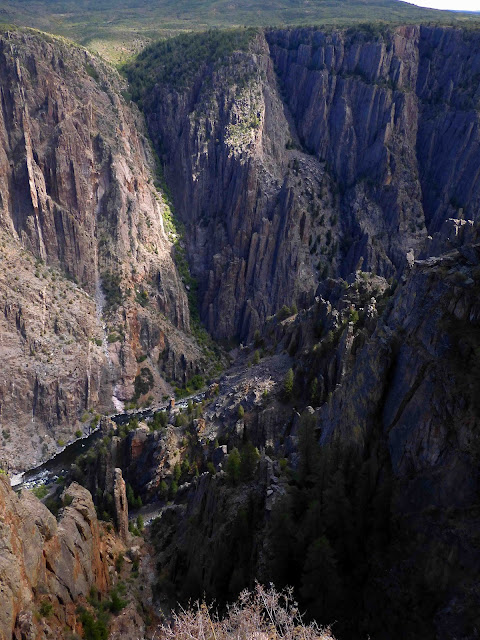 From there, we drove on the 7-mile South Rim Drive, stopping at some of the lookouts along the way. Our first stop was Pulpit Rock. The rock parapet here was crafted by the Civilian Conservation Corps in 1930. 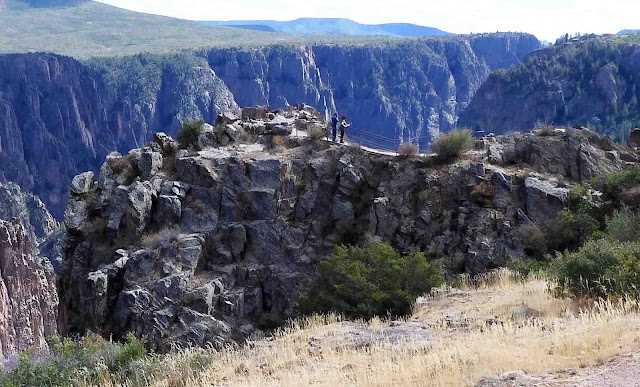 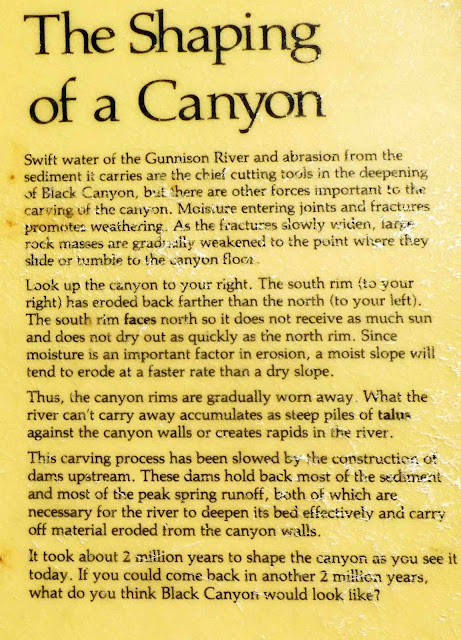 And then peered into the canyon. Wow! 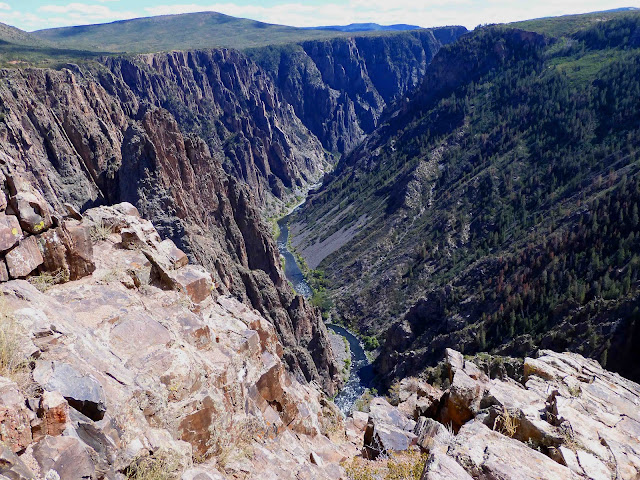 It was after 1:00 p.m. by then, and so we decided to have lunch. We only opened two of the three slides on the camper. While we were eating, Smitty discovered he could jump from the bed to the upper reaches of the closed slide. 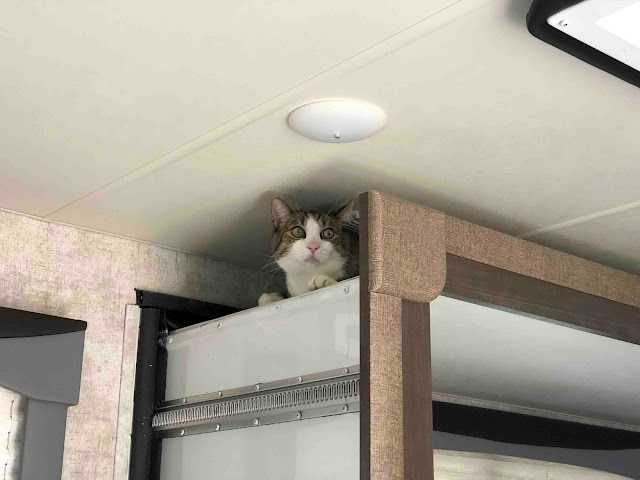 From there, it was a case of, how do I get down again? Mike ended up helping him. 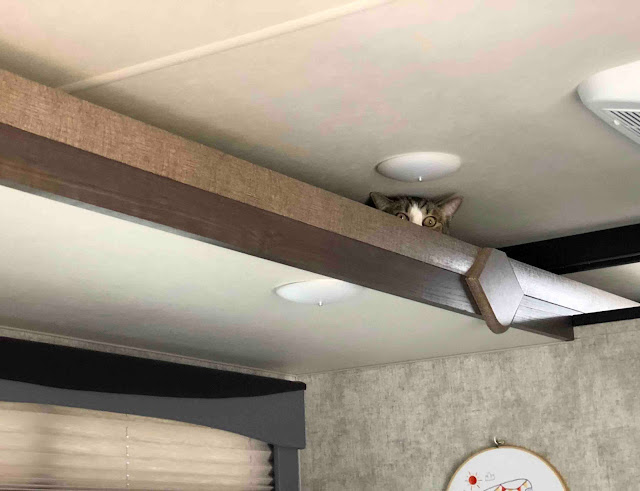 To the cats reading along, this is an excellent demonstration of the idiom, "curiosity killed the cat." Please don't try this at home.

Our next stop along the drive was The Chasm overlook. 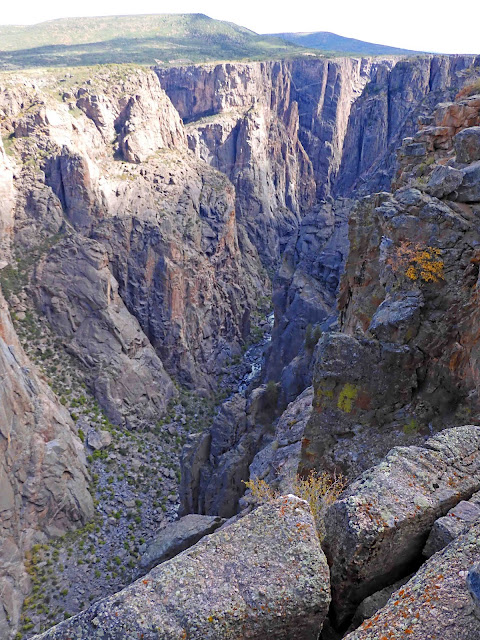 On the opposite wall, we could see examples of the pegmitite mentioned in one of the signs pictured above. At this section, we were as close to the North Rim as we would be on this trip, just 330 feet across the canyon. No zip-line here...sorry. 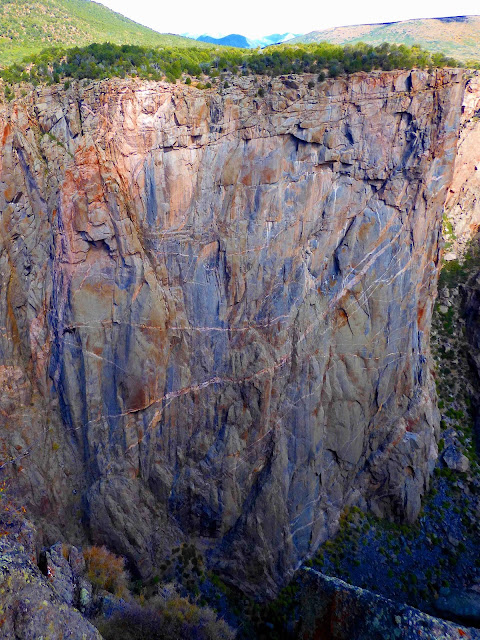 From the parking lot, we could walk a short distance to the Painted Wall. Along the way, I snapped this image of the one blooming thing in the park yesterday. No thoughts about what it might be. 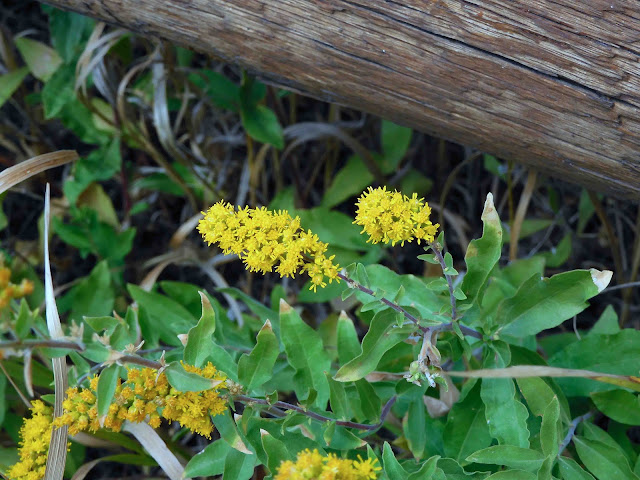 Painted Wall can be seen in the image below. It has some great examples of pegmitite, but also, it is the tallest cliff in Colorado at 2,300 feet. 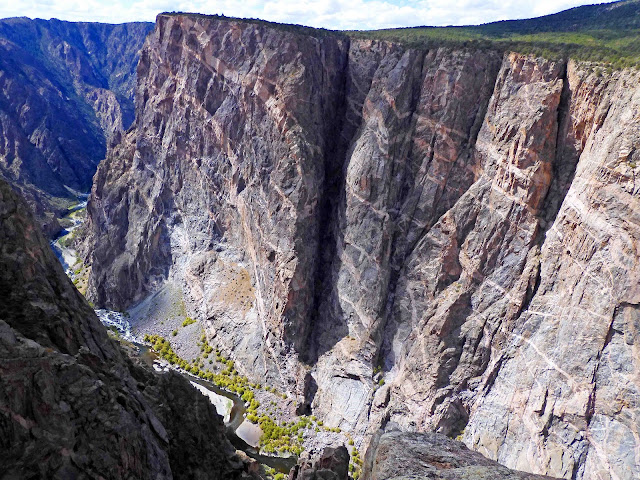 Here's some information about it.

Walking back to the truck, we had a brief exchange with this guy. 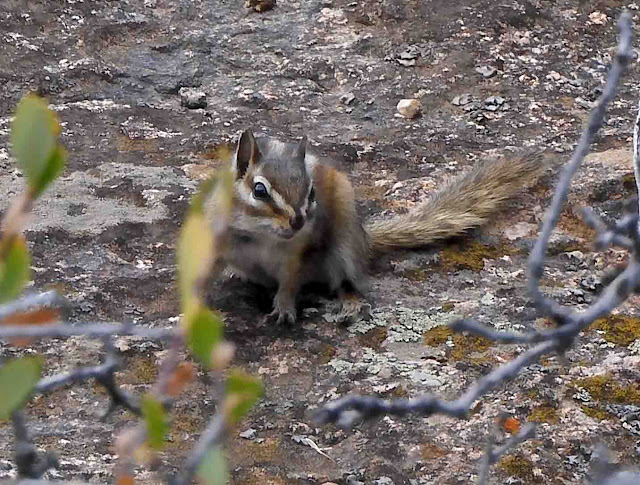 From there, we drove to the end of the South Rim Drive, called High Point Overlook. From there, one can see where the Gunnison River flows out of the canyon and onto the Colorado plane below. 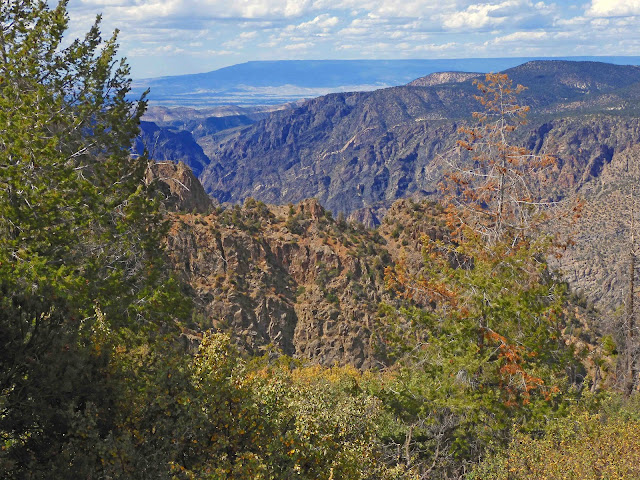 Walking to the other side and looking in the other direction, one can see agricultural areas. In the middle of the image, but difficult to see, is the community of Montrose, where we are staying. 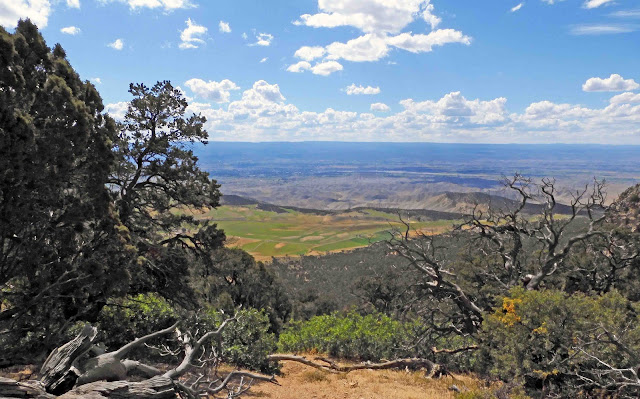 So the pictures don't really tell the story, and I encourage you to see it for yourself if you are able. It's worth at least a couple of days driving to see it.

We ate our first restaurant dinner of the trip last night. Just a block from the KOA is a barbecue joint called Jimmer's. You might recall we've tasted barbecue in North Carolina, South Carolina, and Texas. Now we can add Colorado to the list. It was very tasty, and we had fun at the restaurant. We ordered one of the feasts for two, which included a half rack of ribs, brisket, turkey, and pulled pork, along with corn muffins and three sides. For dessert, Mike ordered the Moose Poo, 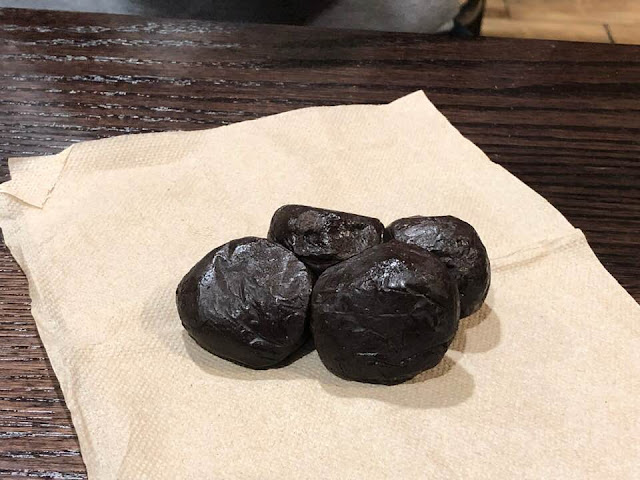 which is actually Oreo Truffles. 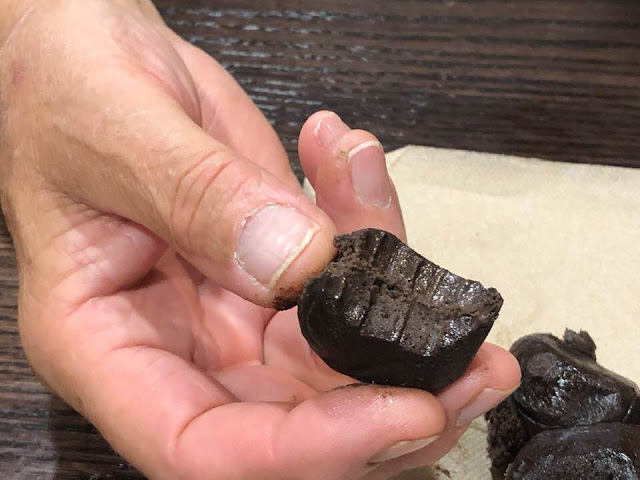 Looks delicious, no? Bear Scat was also on the dessert menu.

Today we'll be leaving Montrose and moving on to Fruita, Colorado. Fruita just happens to be the place we'll stay after driving another scenic byway, the Rim Rock Drive through Colorado National Monument. Its webpage describes the scenic byway as "one of the grandest scenic drives in the American West." Sounds good, huh? It's considered inseparable from the monument. I first read about it in a photography magazine. The road is windy and narrow, and so we've done some reading to make sure it's safe for truck campers towing trailers.
Posted by Barbara at 4:40 AM

Thanks for sharing. I wanted to go to Black Canyon this summer, but the grand daughter traveling with me was not very receptive to stopping on her way back home to Oregon. Definitely on my bucket list though now!

The look in Smitty's eyes! Priceless. Moose Poo brought back memories of my son at 2 or 3 years old, walking along the trails in Denali State Park, staring intently at the ground and pronouncing "moose poop" every time he saw some scat along the trail - Oreos indeed!

Looks like you found another beautiful National Park I need to add to my bucket list. Beautiful views and nice hiking. Smitty must have been inspired by the canyon to jump around inside your camper. LOL!

My brother moved to Montrose County a year ago, and we visited him for the first time last spring. We will definitely have to add Black Canyon to our sightseeing list this fall or next spring. The area is a pleasant day’s drive from us here in Salt Lake. I read your cat warning to Alfie and Darla, who just rolled their eyes at me. But forewarned is forepawed.

I have been reading and following your travels with awe. This particular post just wow's me with the painted cliffs though. Yeah, the rock climbing must be getting in Smitty's furs as well. Enjoyed the two quilt shops - I would have gone nuts with that great sale.

Dearest Smitty,
Ridiculous! I love climbing to new heights...you just have to train staff in their sherpa duties. Just have staff come up to where you are, have them bend their head a bit so you can jump down onto their shoulders. If they bend over more, you can ride around piggy back. (And yes, this works in reverse too. When I was a kitten kitten, when staff bent over to clean the litter pan, my sister and I would use staff's back as a launch pad to get into the closet shelving.

P.S. It's also fun to launch down onto shoulders unexpectedly.
P.S.S. And make sure to teach staff to come when they are called!

I am sure that all of us "ride along" blog readers are all saying "WOW" with the scenery. And some of the canyons look like "art" quilts :-)

I'm definitely going to have to put this on our must visit list. What beautiful views! And the look on Smitty's face! I want to say poor fella, except he got himself into that mess! :-)

I am in awe of what you are experiencing. Totally jealous but a long haul from home, West Virginia. Can only think "some day".

WOWsa! We were thinking of going up to Gunnison, but we couldn't find a reasonable campground that could take our 44 footer. So thanks for taking us along! I'm pretty sure your bloom is goldenrod. LOVE the moose poop! Wonder what the bear scat was? Ohhhhh, Smitty, be glad your mama was there and aware! That's a good way to make squish! That would be a fate worse than AWFUL! Safe travels!

leaves not right for goldenrod, plus they like boggy wet soil, and you are in high, arid area by the looks of it. Looking in my wildflowers book it looks closest to Silverback Luina, littleleaf luina… stems white with woolly hairs, but I cannot be sure, you have such a much better photo than the one in the book.

The painted cliffs are my favourite part but the whole scenery is awe inspiring. Smitty please take care, remember cats only have 9 lives.

I'm glad Smitty made it through his little adventure unscathed, even if he did need a little help extricating himself. :)

More incredible photos - I'm so glad you have lots of room in your rig to take us all along!