Yesterday morning saw me finishing off my fourth and final mystery project. Here's a little peek. 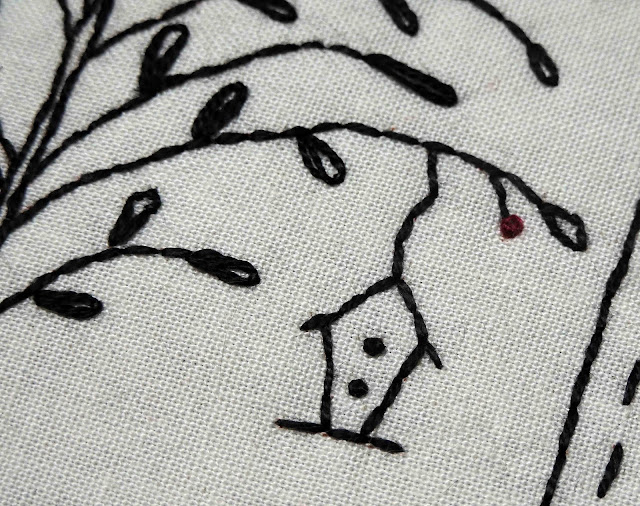 I should be able to show it to you in a couple of weeks. These are the fabrics I'm going to use to finish it off. I'm not sure about that stripe yet. That would be the binding, but I won't be sure until it's all sewn together. 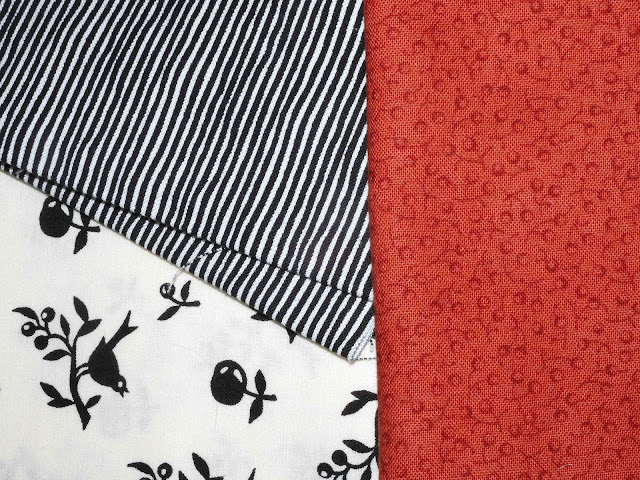 There was just enough time to trace out my next project. You might have noticed my last two stitchery projects have been mysteries, intended as gifts for someone else. Now I'm back on track with my own line-up of projects. I always have five embroidery projects in the line-up at any given time. One of them is a "shorty" that can be finished in one go-round, and that's where I am on my list. The new one is this "Sweet Land of Liberty" from Crabapple Hill Farms. 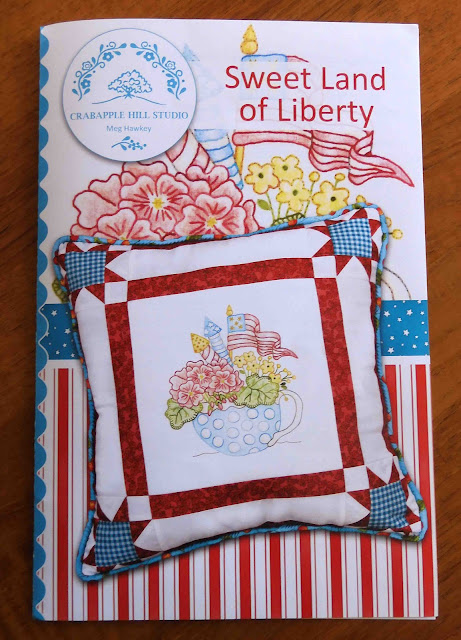 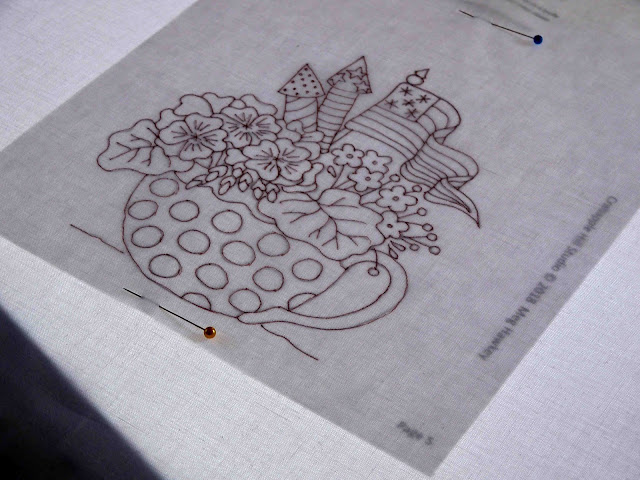 and then used crayon to color it in. I don't know why that blue looks so mottled in this picture. It doesn't look that way in person. 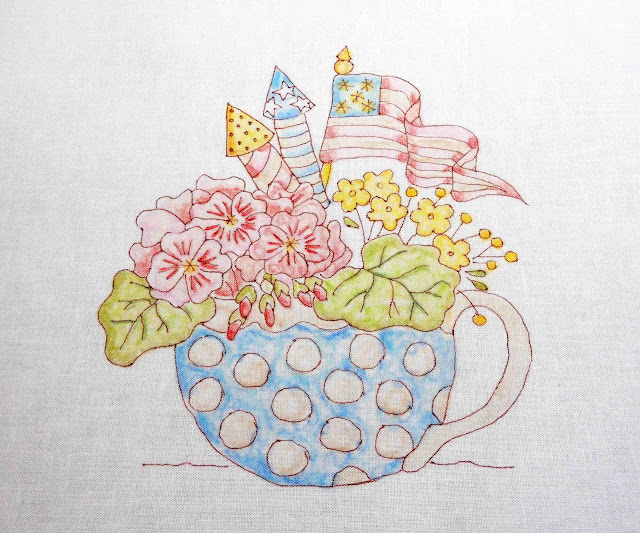 Also, I'm lazy and so I bought the floss packet to stitch it up. Aren't these pretty? 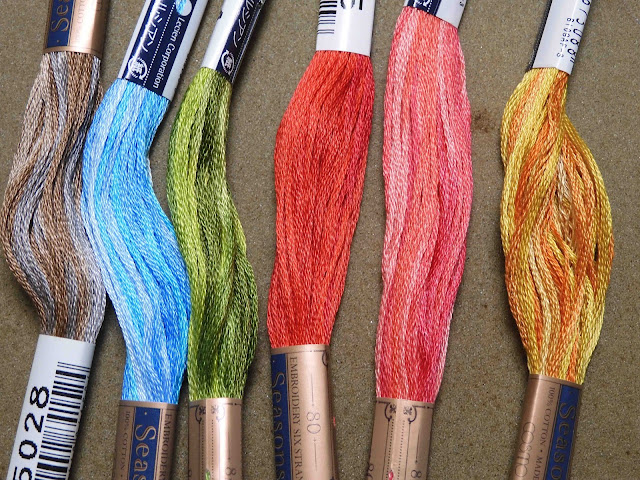 Now it's hooped up and ready to go. 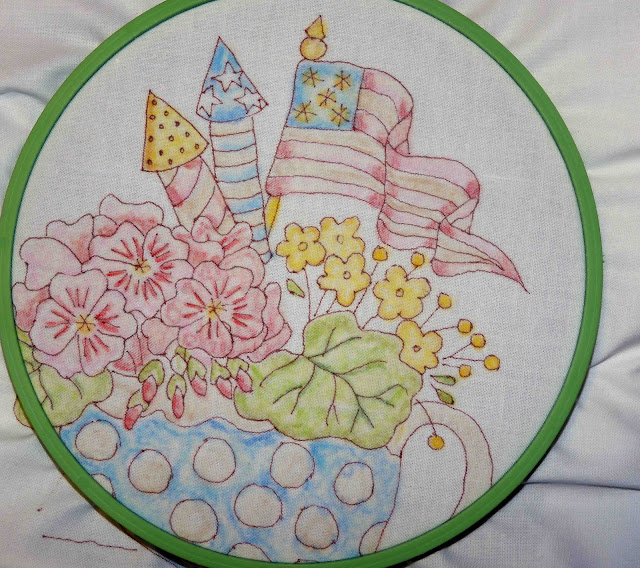 I didn't have time to start on it because I had a date with my dentist to fix my chipped tooth. Yesterday's drive downtown was the worst traffic mess I've seen in a while. There was an accident on the main drag leading to the first state highway. Then bumper-to-bumper traffic on the highway. Then, moving onto the main highway into downtown Portland, more bumper-to-bumper traffic. But it was hurry up and wait for my appointment with the dentist. The appointment itself was quick and easy. As it turns out, the tooth was the tooth beside the one that chipped back during the 17th century, and so now I have a matching pair. Also, the repair lightened my wallet by $400. (I took two tubes of "free" chapstick from the bowl at the reception desk.)

With so much less cash on my body, you'd think the drive home would have been fast, but no. It was bumper-to-bumper all the way. On the main drag leading back home, no less than six police cars were lined up blocking a right-turn lane. I'm sure there was something other than a gab fest going on, but it wasn't apparent to the casual observer. There appeared to be a lot of laughter and back-slapping. It made this crabby driver want to stop and get out of the car and yell, "Does your mother know you're here?"

So it was good I was spending the afternoon on the boat with Mike and a friend. I'm the boat babe, holding up the flag for a skier in the water. It's the law here in Oregon that there must be three people on the boat if there is to be any water-skiing: One driver, one flagger, and one skier. Thus, it was my solemn duty. In our travels, we saw this great blue heron, who appeared to be following us. He was warily watchful of our activities for most of the day. 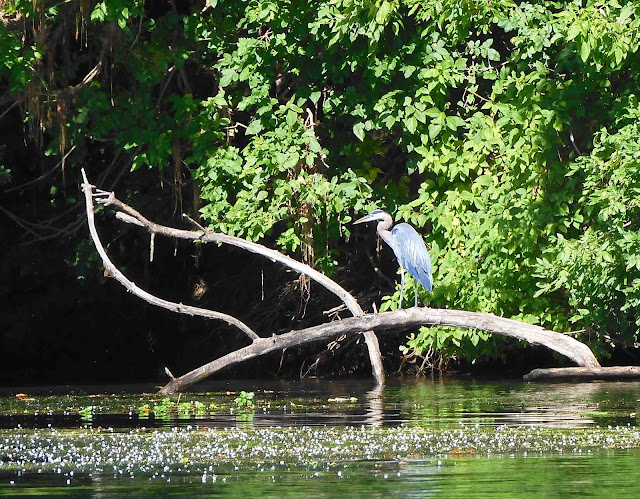 It would be a waste of rope time for me to do any skiing. I'm happy to stay on the boat and yell helpful comments like, "A little more face plant on that next fall!" This is our friend Tim. 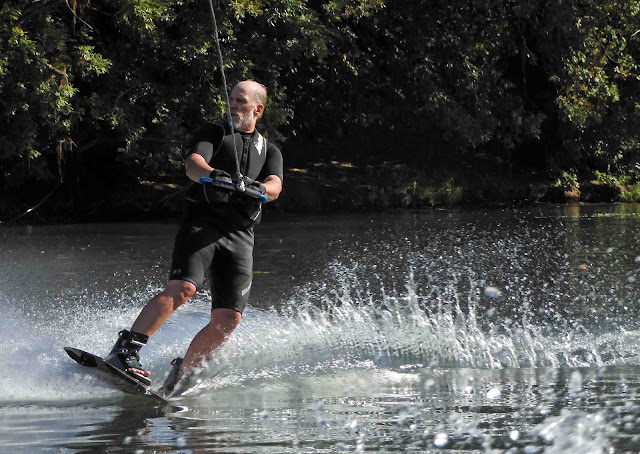 And here's the boat captain. 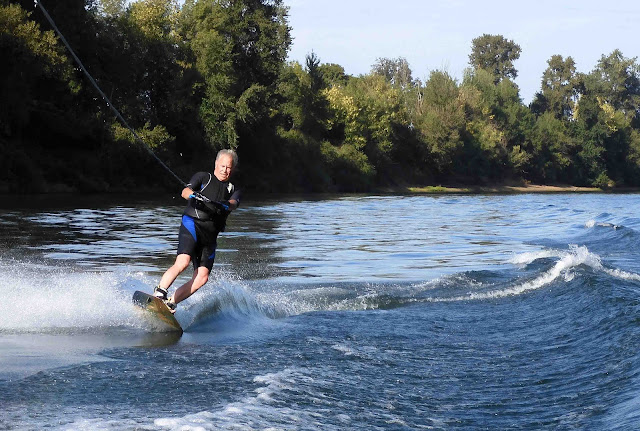 It was a nice way to spend the afternoon of an otherwise stressful day.

Today we're heading out early to get some breakfast and pick up 25 pounds of tomatoes from the farmers. We're also going to get some apples for applesauce, and so I'll be back to canning this weekend. I'm hoping I'll get in a little more sewing time, but not counting on it.
Posted by Barbara at 7:50 AM

I am going through similar dental problems, even worse due to my advanced age. I totally understand the traffic ordeals, as well. I try to make my appointments at the lease traffic times.

I have been following your canning projects and I am totally in awe. I can't even imagine doing all that. It must be so rewarding to open up those cans and enjoy all those delicious concoctions!

I love your two kitties. I recently lost my beautiful 16 year old Calico to thyroid disease. She suffered so much at the end and I miss her. I am kept company by my 15 year old small poodle and eight year old rescued neurotic mutt who wants to be constantly attached to my side.

I enjoy following all your activities, especially quilting and stitching. I have bought a few things and hope to soon try my hand at some slow stitching, as well.

Thanks for keeping us entertained.

I agree with the above commentator about canning--that is a lot of work--but sounds like you do get yummy results...
Traffic here is the same mess--plus the State is adding some on and off ramps for our new Costco (due in Nov) so the resultant mess of our Town roads is unbelievable...we try to avoid those busy times...
that is a cute CAH block...your embroideries are just lovely with that crayon work...
Enjoy the weekend...hugs, Julierose

Did you hit any Hood2Coast runners?

I kind of like the mottled blue - cute piece. I had one of quilt class gals bring me a huge pile of toms (again), plus zucchini and yellow squash to feed an army. BUT, I freeze - not can. I spewed my coffee on the "does your mother know" comment!! Sometimes you wonder.

That black and white would make a great binding for that little mystery project! Your 4th project is going to be a pretty one too. The two guys are looking good on the water. I don't know anything about waterskiing, so have never heard of a flag thing. Not sure if we have that law in MN or not. Traffic in the metro region in general around here is a headache; road construction everywhere, with no soon finshes. Ugh. Happy canning!

First let me say I LOVE to be out on a boat. Skiing? Nope. My BIL tried to get me up waaaay back in the 70s. What felt like ALL afternoon. Here is a question about your stitching projects. What do you use to trace a pattern onto fabric? After you color with crayon so you iron to get up excess wax. If you do, does that heat set your traced lines? I'm thinking of stitching the Hocus Pocus blocks.
xx, Carol

With all that traffic, you'd think they were having a party or something! Your invite must have gotten lost in the mail. That new stitch piece looks like a whole lotta work, but still not as much as all that canning! I'm sure you get a real warm fuzzy from getting all that accomplished! Looked like a most excellent day to be on the water. What, exactly, is the purpose of the flagger? Do you have to hold it up ALL the time, or just when someone goes down? Do you get to drive when the Captain is skiing?

Sweet Land of Liberty looks like it will be a very cute table runner. The skein colors are lovely. Have fun!