Yesterday's activities were a mish-mash of a lot of different things. The first task of the day was to get a start on processing the 13+ pounds of cherries in the refrigerator. I wanted another batch of the Sweet Cherry Lime Jam, and so I started there. This is a small batch recipe, and so the yield was just 3 pints. It was so delicious first time around, I knew I'd want some to share, and so I made a second batch yesterday. 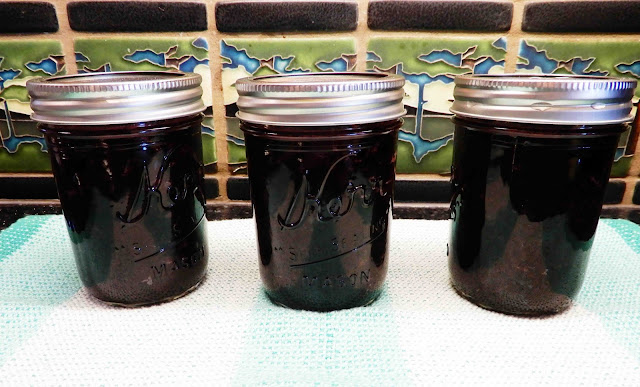 Check out that dark color and compare it to the first batch: 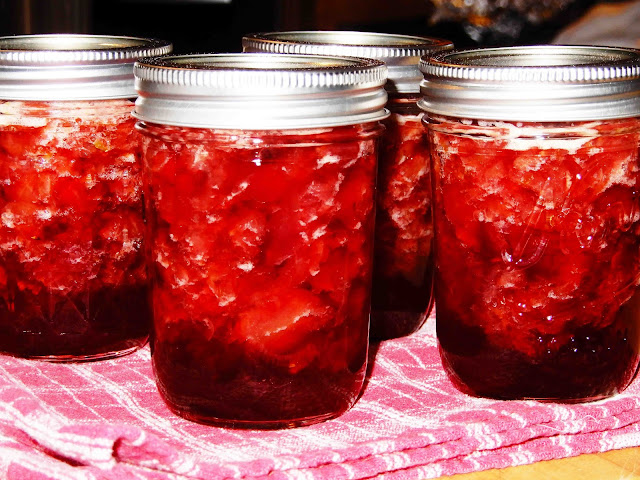 For one thing, I cooked it longer, and so it was more concentrated this time. You can see that my yield yesterday was one less jar. Secondly, the cherries are very ripe. We've been so unlucky with critters eating our cherries that we tend to pick them before they're fully ripe. This year, we've had no problems with critters. (Frankly, it makes me wonder what happened to the raccoons.) It's been wonderful to let the cherries go to their full dark maroon ripeness both for canning and for eating straight from the tree. I can't remember ever tasting cherries so candy sweet.

Also in yesterday's canning extravacanza (did you see what I did there?), I made simple Cherries in Syrup. Oh yum. 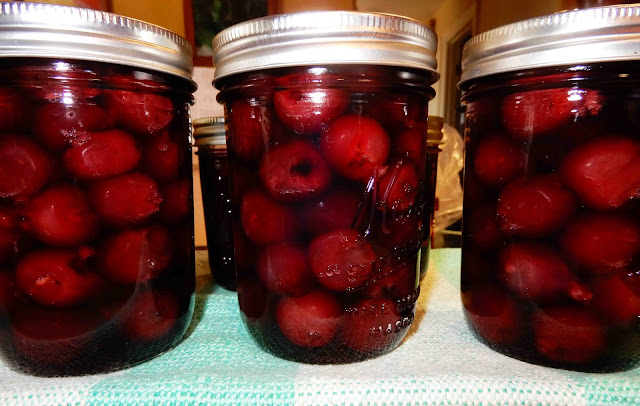 It's a recipe from this book from America's Test Kitchen. 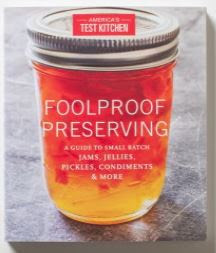 It's stupidly simple to make. Here's how you do it: Combine 2 1/4 cups of sugar with 2 1/4 cups of water in a large pot. Bring to a boil. Add 3 pounds of pitted cherries, and return to a boil. Boil briefly (I let mine boil for one minute), and then remove from heat. Using a slotted spoon, load cherries into pint jars, gently pressing to fill jars and remove air bubbles. When jars are full, ladle syrup over them to cover.

From that point, you can either continue with lids, rings, and boiling water bath (15 minutes for pint jars, making adjustments for elevation), or you can simply refrigerate them. But here's the thing: there was leftover syrup, and it was much too pretty to throw out. It's essentially a simple syrup flavored with cherries, and so I filled another pint jar with just the syrup and put it in the fridge. Then, later in the evening, I used it to make cherry Bee's Knees cocktails. I made them using the same recipe, but substituted the cherry syrup for the lavender blossom syrup, and voila! What a pretty drink! And we liked it! It was tempting to drop a cherry in there, but nah. 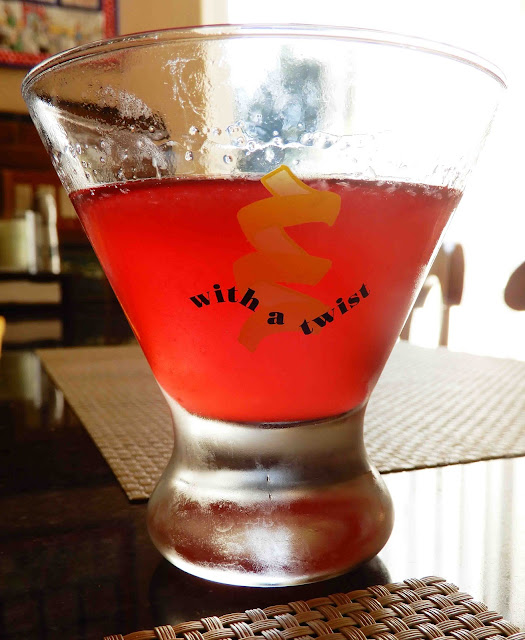 After dinner, we popped open one of the jars of cherries and had it over vanilla ice cream. Honestly, you should be careful. You could die eating this. Death by vanilla ice cream...with cherries...wouldn't that be horrible? Where do I sign up? 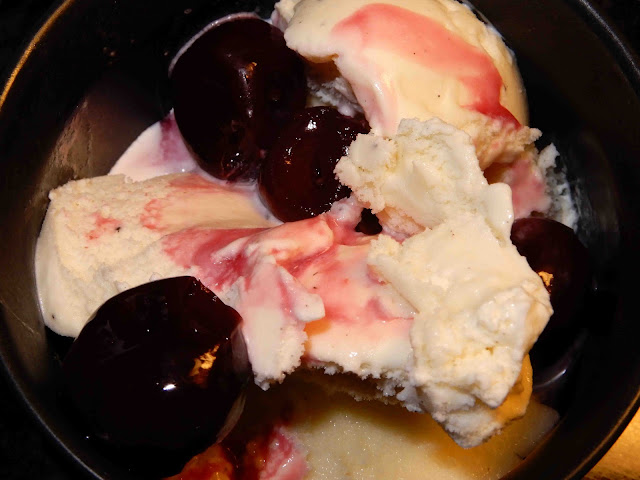 Oh wait...did I just skip over dinner? Well, I tried something new last night, and this was really good. This is a Marinated Vegetable Cheese Sandwich with Sun-dried Tomato Pesto. 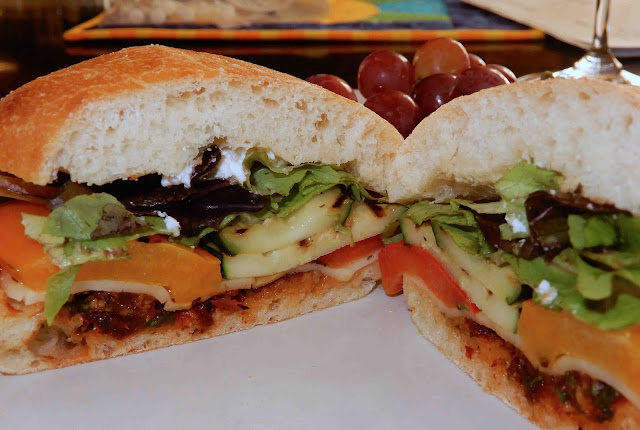 Our last CSA share had some of the items featured in this sandwich: zucchini, lettuce, and basil. The recipe calls for arugula, but I used our CSA lettuce. (Also, I used the zucchini from our own plants. The CSA zucchini is waiting its turn.) While I was waiting for things to process during my canning session yesterday, I got these vegetables going in their marinade, and I made up the pesto. Then, we grilled the veggies and the bread and made up the sandwiches last night. We're in the middle of a hot spell right now, and these were tasty on a hot day. You can find the recipe right here along with a better picture of the sandwiches.

But let's get back to the morning, shall we? (It's always advisable to talk about dessert first, you know.) When I had the canning done, I took off for the grocery store. (Grocery shopping was surprisingly painless yesterday.) When I got home and had things put away, I did a little housework and iced my knee for good measure. By then it was time to pick up little Sadie from the vet. Poor thing...she had to have four toofies pulled. All lower ones, but three were chewing teeth. 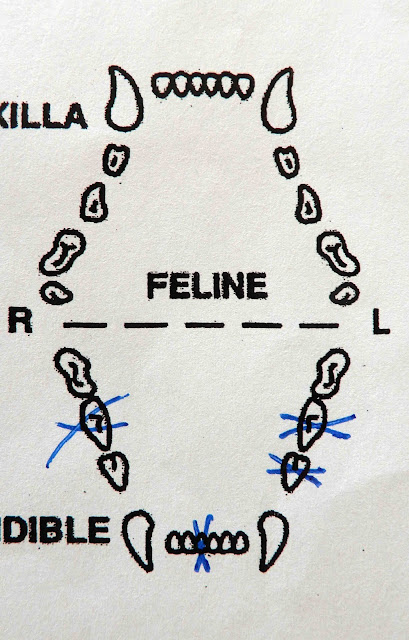 Poor Sadie. She got off to a rough start in life. She's doing fine after all that. In fact, if I didn't know for sure and certain she'd had this done, I'd never guess it. She seems like her old self. We're limiting her to soft foods for the next week or so, but she's eating well, running around, cadging for pets, and kicking the beehive otherwise known as "Smitty." She acts as if she doesn't have a care in the world.

It was a warm day yesterday, and so the kitties were hanging out in the basement when I got her home. It's the coolest place on a warm day. 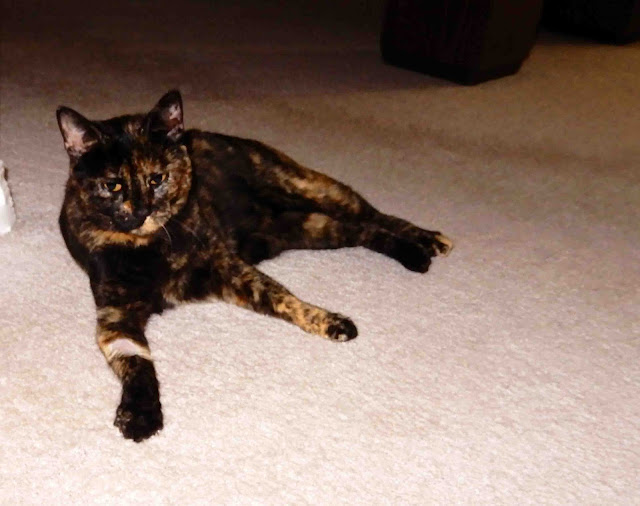 Smitty finds her very entertaining. He just watches her antics and acts grumpy when she assaults him. 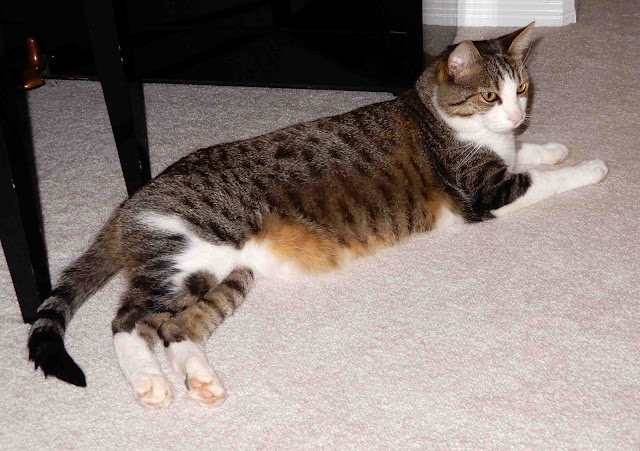 Nevertheless, he missed her yesterday, and they bumped noses when she got home.

In yesterday's mail, the Pomona's Pectin I've been waiting for finally arrived. Possibly I'm the last person on earth who hasn't heard of Pomona's, but it was new to me. I know folks who make low sugar jams, but you know me...I want it with twice the sugar and all the caffeine. Anyway...some of the newer recipes I'm trying for jams and jellies call for this product, and so I'm using it for the first time today. 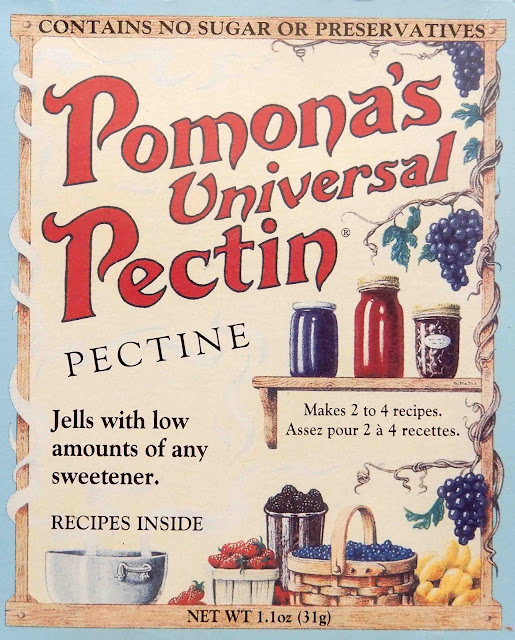 I'll be using this today to make Sweet Cherry Balsamic Jam. Since I've never had the pleasure of so many cherries to work with, I'm trying lots of different recipes and this is just one of them. Balsamic vinegar can be cooked down to be very sweet, and it's often used in desserts. (I learned this from Giada DeLaurentiis when she used to do her Italian cooking show on Food Network.) So while it might seem strange to add balsamic vinegar to jam, I have an idea this might be very tasty. I'll have to let you know.

Also on today's cherry agenda are Black Forest Preserves, which are cherry preserves with the addition of cocoa. The folks on the Food in Jars website are raving about cherry jams and preserves with cocoa added. The one I'm trying today uses regular liquid pectin and gives the option of adding a 1/4 cup of amaretto. If you don't want alcohol in yours, you can substitute 1/2 teaspoon of almond extract. Tomorrow I'll be trying another one that uses cinnamon and a pinch of cayenne instead of amaretto. I asked folks which one they preferred, and it was a pretty much even 50-50 split. Guess I have my work cut out for me if I have to decide for myself. Tomorrow's recipe is from the Pomona's website, and so it also uses the Pomona's pectin.

Also in yesterday's mail, my friend Sherry sent me some blue floss she thought might match the one I've run out of. AND IT DOES!!! HOORAY!!! I was so excited, I stitched up those words right away when I opened the envelope yesterday. It was almost as if I were afraid it would slip away from me again. Thank you, Sherry, you've saved me from quilt block doom. 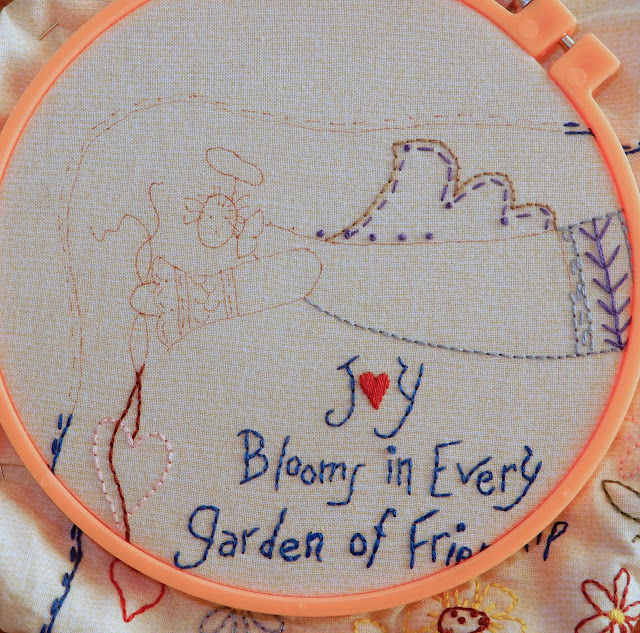 If I have time today, I'll do some more work on this. It's pretty close to being finished. I have plenty of blue floss to finish up this block, but I'll switch to the DMC for the remainder of the blocks. The color is close enough that no one will be the wiser...except you, so mum's the word, right?

Okay, so we're in a heat advisory here in Portland right now. Those of you in hotter parts of the country will sniff at our sub-100° heat advisory, but it feels pretty hot to us. I want to get out first thing and do my watering this morning, but then I'll get back to the cherries. Hopefully, I'll have some time to get back to my quilting too.

Before I go, I wanted to share this video someone shared on the Food in Jars site yesterday. So cute. It certainly encapsulates, musically, the best parts of canning. The season is just getting started, and I'm excited to put "summer in a jar" right here in my own home. If you can't see the video, then click right here. It'll give you a feel good moment.


I'm adopting this as my personal anthem. Time to get going. The sun is rising, and it's not getting any cooler outside.

Wow, you got lucky with the cherry crop! Lots of lovely jams and jellys. Poor Sadie, but sounds like she is taking it all in stride - tough cookie.

Did you know Meg Hawkey of Crabapple Hills Studio will be in Hillsboro in August? Shes teaching classes! A78mandel at yahoo dot com

Oh, your jams look so pretty. Those cherries make me hungry. So glad you got a big crop + extras. I miss the home touch of canning, so I love seeing what you do. Instead I made an old fashion peach cobbler over the weekend...yum! I added rum to it and it was so good. Our peach crop locally is a good one this year.

Cherries and cocoa together in jam?! You're killing me here! Sigh! We also love cherry pepper jam!

Now that's a sweet mess o' cherries you've got goin' on there girl! The boss brought in 3 BIG grocery bags full of grapes from home today, and my friend Marlene has agreed to try to make some grape jelly...not sure if she's going to be doing it in the kitchen at work or at home, but cross your fingers for her!

Thanks for the link to that song - I shared it on F'book for inspiration for Marlene.

Give Sadie an extra pet from me!

So fun to see you enjoying your cherry harvest! I do wonder, too, what happened to the raccoons, but let's hope it's a permanent relocation or whatever. Glad Sadie's doing okay! I'm off to check out that sandwich recipe!

You might want to do a small batch of brandied cherries. There are lots of recipes on the internet. These are usually not processed but are stored in the refrigerator. Small jars make nice gifts. It is used on ice cream or sponge cake and the like. You get the brandy flavor without the alcohol. It's probably a good idea not to serve to children.
I miss canning, but in the summer months our well water has a lot of minerals and I hesitate to use it. (I've written about this before). But if I manage a few days in town I'll see what's available then.
Poor Sadie. Did you know that cats (and others?) can get crowns? It's amazing.

We love cherries here too, and that Greg Brown song-so wonderful! A delicious post!

You've got lots of fun and interesting plans for all those cherries. The cherries over ice cream has me completely captivated. We are definitely going to have to try that.

The cherries look so pretty! Poor Sadie! Kirby just went through that and had 9 teeth pulled.

Both my puppies are in for teeth cleaning today. They won't be very happy when I pick them up this afternoon. Glad the floss matched.