Hey did you see what I did with that title there? We've been doing a lot of sight-seeing, but I'm so terribly clever, I said "sight-sewing." It's like "sight-seeing"...only instead of seeing the sights, I spent the day sewing. Ha! I know...the punchlines just keep rolling in here at Cat Patches. Try to keep up, will ya? (Don't think I can't see you rolling your eyes.)

So, yeah...we stayed an extra two days, and that meant we had a day to go nowhere. And that meant I could break out the sewing machine and do the first sewing of the trip. Don't expect this to become a habit, but it still felt good to be back in the sewing saddle. The day was interrupted because Mike was doing some RV maintenance. He needed to go to the auto parts store, and it made sense for me to go along and do some grocery shopping. If it seems as if we're going to the grocery store every frickin' day, it's because we usually are. The refrigerator in the RV is a pretty good sized one for an RV refrigerator, but it's still quite small. It's not really possible to stock up with lots of groceries because there isn't a lot of space to keep cold things cold. Also, there isn't a lot of cupboard space for food, and so, we keep our food stored at the grocery store...stopping in whenever we need something...which is pretty much every day.

Okay, so before we get to the sewing, it's time to announce the winner for the Bag Ladies of the Fat Quarter Club Stitch-Along. Mr. Linky has spun the dial and come up with:

Congratulations, Gail! I've sent you an email, so check your inbox.

So, back to the sewing. It's not the most efficient sewing space, but it works well enough. 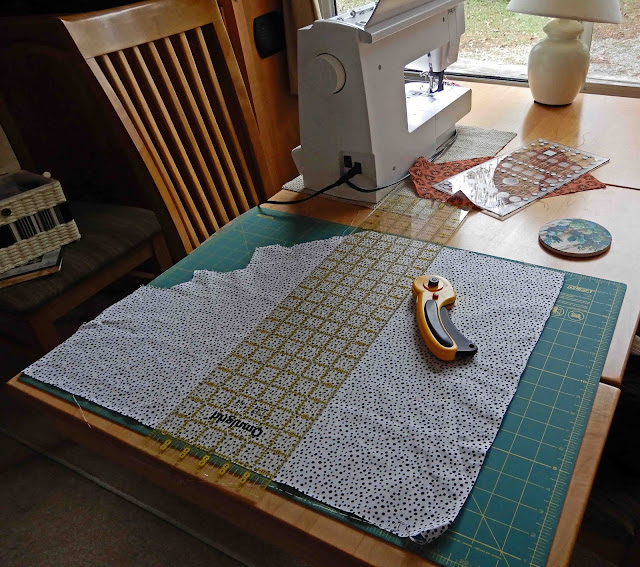 We have to be hooked up to electricity for machine sewing because I need to be able to plug in the iron too. I can run one thing or the other on our trailer battery, but not both. The iron has to be set up at the other end of the trailer next to the bedroom window. The window has nothing to do with it, but the light is nice. 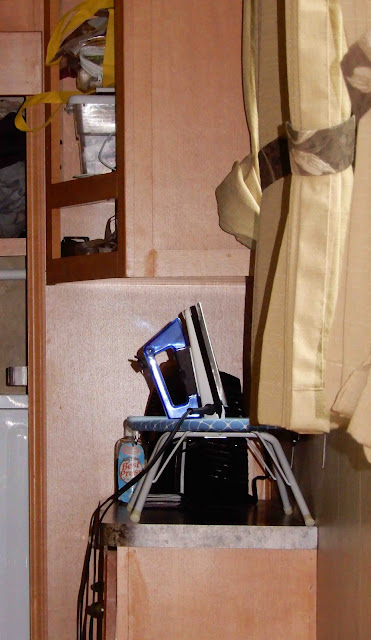 Of course, every quilter knows that one cannot sew properly without a full contingent of snoopervisors.

Also, using Pfelicity's travel bag as an example, Smitty would like to demonstrate the age old axiom, "If I fits, I sits." 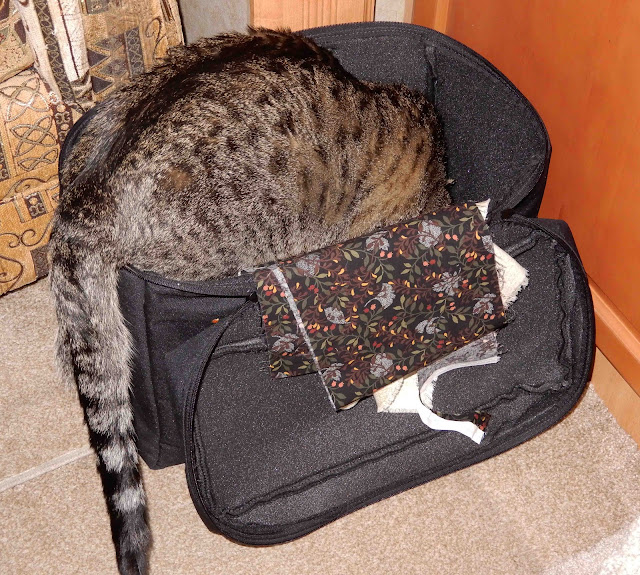 So what do you suppose I worked on yesterday? Well, just before leaving on this trip, I finished all the embroidered blocks for the Hocuspocusville quilt. I have all the fabrics I'll need to finish the top along with me, and so it seemed like a good day to get back to basics, and sew some nine-patches. Here's a picture of the finished quilt from the pattern cover. 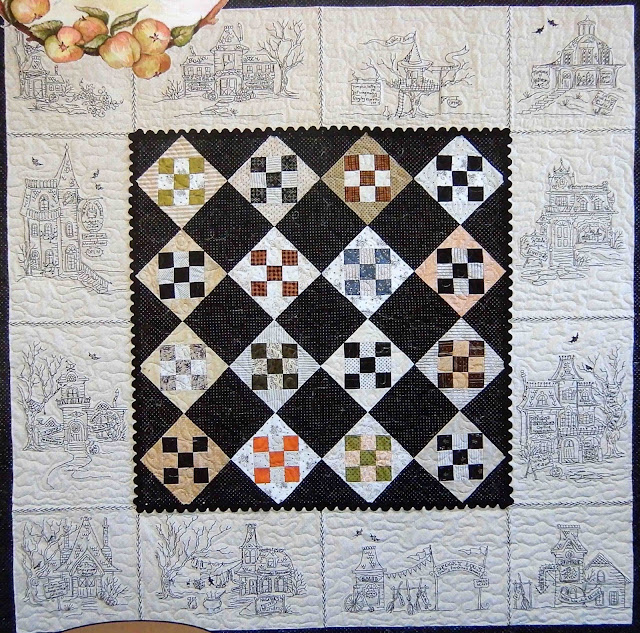 I'll need 16 nine-patches for the center panel. Since they're all different, there could be no strip piecing. Each one is cut individually. Yesterday, I knocked off 11 of the 16 I'll need. 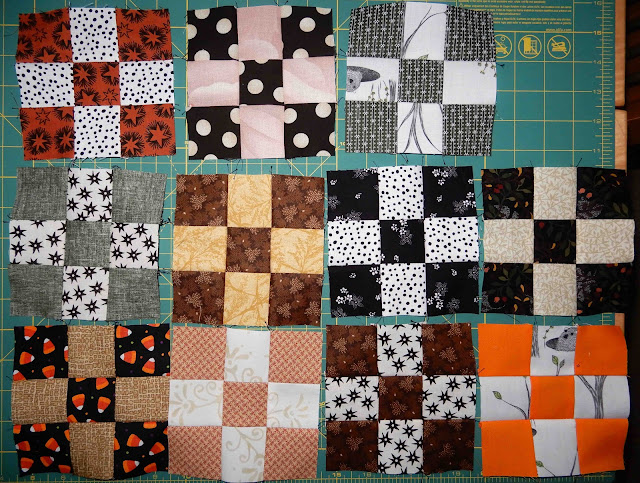 I might need to pick up a few light fat quarters in our travels to have enough fabric for the setting triangles. I have a black polka dot for the alternating blocks. That will need to wait for a while, however. Who knows when I'll get another sight-sewing day? Certainly not me.

We're moving on today, heading for Shenandoah National Park. I visited there when I was a little girl. My family lived in Groveton, Virginia, and Cherry Point, North Carolina, when I was young. So much of this area from Washington, D.C., south seems familiar to me because I've ridden the streets in the family car, gone to school here, vacationed here, and yes, camped here. We lived here from the time I was 4 until I was about 8. Then, my dad was transferred to Hawaii, and we never again returned to the East Coast as a family. I was old enough, and yet, too young to have strong memories of the place, but it seems very familiar. I know we visited Shenandoah many times, and so I'm curious what will seem familiar once we get there.

We'll stay in Shenandoah for a few days, and we'll stay long enough for the weather to be good so we can see the sights. From there, we'll drive south on the Blue Ridge Parkway, which is billed as one of the most scenic byways in the country. It will take us to Great Smoky Mountains National Park, which straddles western North Carolina and eastern Tennessee. When we leave there, we'll head back east to North Carolina's Outer Banks and then south along the coast into South Carolina. From there, we'll visit South Carolina's Congaree National Park, a place neither of us has seen before. There are sights to be seen in those travels that I haven't listed here, but it's all very exciting when it's in the planning stages.

So all of that to say, we are going to be without electricity quite a bit over the next couple of weeks. My blogging may get spottier, depending on internet access. Don't worry though...I'll have lots of pictures and lots to tell you whenever I have a chance.
Posted by Barbara at 3:25 AM

Heading our way...sort of. Enjoy the Shenandoah. Don't forget the Skyline Drive there. Great views and hikes. The Smokies are beautiful....although the color is fading quickly right now.

I love the candy corn block! Say hi to my part of Virginia - my first job was in Front Royal/Strasburg, I went to W&L in Lexington, got engaged at Cascade Falls on the BRP, and got married at Natural Bridge. I expect lots of pictures to keep me reminiscing!

Thanks, Barb, you are so generous with your adorable prizes! I've been to D.C. a time or two, but the surrounding region is new to me so I am enjoying your travels. I should have taken advantage of your sight-sewing day to do some sewing myself, but my brain is on vacation lately. As always, the photos of your quilts, old and new, inspire me to want to do more.

As you may have found out by now the Blue Rige Parkway goes all the way to GA is lovely but very curvy. I hope Mike does not mind. It's slow going. But eventually you'll get to the Apalatian(sp?)Museum(or something like that) it is fantastc! Quilts are featured stongly every time I was there. Quite a few quilt shops.
**We camped(tent) at various places along that slow moving mountain road so much that our 2nd son decided to good to college up there due good memories. Hopefully you will love these old mountains as well as we did :) -robin (robinsbusiness@hotmail.com)

Doodlebug would like Smitty to know he is 100% behind him on the If I Fits, I Sits, platform. He takes advantage of it daily.

Enjoy the Smoky Mountains. We will be there ourselves this Thanksgiving. I think I sent it to you in an email, but two fabulous quilt shops in that area are Mountain Stitches by Susan in Gatlinburg - smaller shop, very charming, lots and lots and lots of fat quarters and bundles she makes herself. The Cherry Pit in Sevierville - large shop, huge selection, outstanding customer service.

Enjoy the Outer Banks as well. It's gorgeous and this time of year it's empty.

Hope you have a good move day without any white knuckle time driving. I think you just invented a great new term = sight-sewing. I wonder if this applies to when we visit a major quilt show and find all sorts of creative inspiration?

I have faint memories of visiting Luray Caverns; I'd love you to visit there and share some pics to jog my memory. ;-)

I have great memories of hiking portions of the Appalachian Trail in Shenandoah park many years ago. Same for the Great Smokies park. You will enjoy your time there, and the fall colors should be in all their glory.

Sight-sewing indeed! Yes, my eyes did roll! Glad to see that you had a stay-day in between sight seeing & traveling.
I don't think I would have stayed in the lines on those 9-patches. I am pretty sure I would have strip pieced in only a couple of color ways instead of making them all different. Guess that's why I rarely use patterns!

That is definitely an area to stay and enjoy, love what i have seen and you do make me want to get down there. I have relatives all along the coast, so I can visit them too. And I love how your quilt came out, that is really beautiful.

Sew glad you had a day to sit and stitch, despite the break for grocery shopping. I guess you gotta eat, right? Those little nine patches are really cute and will look great with your HP blocks! Looking forward to seeing the pictures of your adventures in the Smoky Mountains. Enjoy your day!

I love reading your blogs and having truly enjoyed your trip. I read you are heading to NC outer banks then farther south. I don't know how far south you are but if you end up in Gastonia/ Charlotte, NC area, you NEED to go to Mary Jo's and check out her fabric store. It is amazing. You can google it for directions. It will be well worth the visit.

So glad your trip will take you to the beautiful state of South Carolina! If you plan on spending some time in the Charleston area (and you should), there is a nice campground on James Island that is very convenient to the city and the beach. Just month of Charleston is the city of Summerville which has a wonderful quilt shop, People, Places & Quilts. It’s located in an old, charming building and is full of wonderful treasures. If you’re headed to Congaree (another interesting place), Summerville is on the way. I hope you enjoy visiting SC, it’s been my home now for 39 years. Let me know if there’s anything you want to know. Happy travels!

I finally caught up! That is a nice trek down the Blue Ridge Highway. We nearly ran out of gas on it! I was driving and not paying attention! We got off at some little town for the night. It is a beautiful drive and part of the country!

Glad you got in a sewing day. Enjoy your journey. You and Mike have already shared some fun stuff. Safe travels.

although the color is fading quickly right now.