The scariest part of the quilting is finished on the Snips and Snails quilt. Yesterday I took a couple of practice runs on the design for the face. Both were terrible. Then, I decided to forge ahead, and it turned out okay. Sometimes I surprise myself. 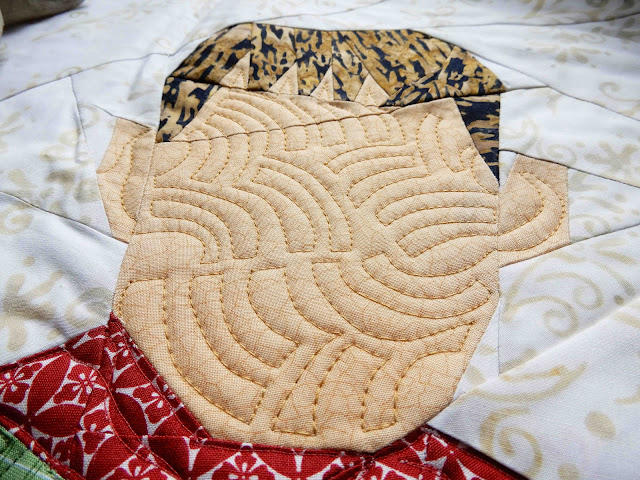 While there's certainly value in making a few practice runs, I can sometimes psyche myself out. Probably I'm being a little too careful and trying too hard to achieve perfection before moving to the "real thing." Knowing this, it sometimes makes sense to just go for the gusto...hit the big time...or, Nike style, just do it. Sometimes it actually works out.

From there, I moved to the arms. The same design didn't seem quite right for the arms. I considered wavy lines going in different directions for different parts of the arms. Then I thought about quilting in some knuckles and bones for the backs of the hands. When I tried it, it didn't look right, and so I took it out before going very far. In the end, I decided to stitch in the seams to give definition to the fingers, wrists, and crooks of the elbows. 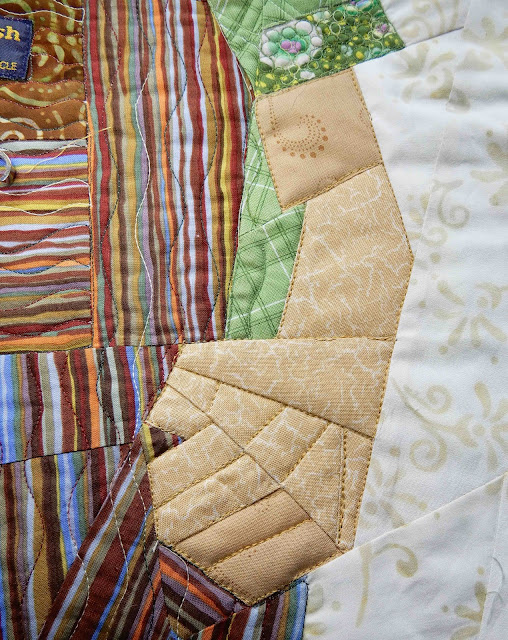 It works, and it's enough, I think.

From there, I moved to the hair. Here, I did a variation on Leah Day's "Hair Filler." Her video tutorial can be found right here. 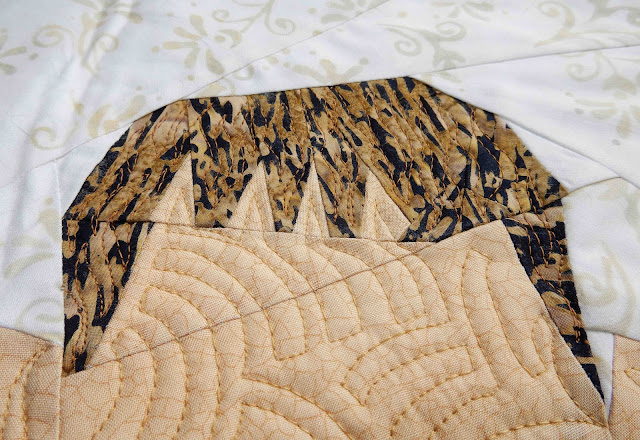 That was pretty easy. From there, I moved on to the shoes. There isn't much to show here. Mainly, I used black thread to outline the black stripes on the shoe laces to give them some definition, and then I outlined all around the outside of the shoes. I'm using a white Bottom Line thread in my bobbin. Although I worked diligently adjusting the tension, I couldn't get rid of those little white dots of bobbin thread. I'll probably take a Sharpie and just put little black dots on those. You won't tell the Quilt Police, will you? 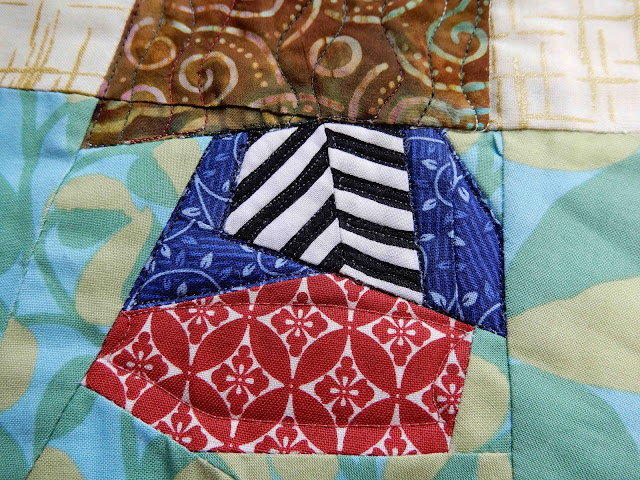 Finally, I finished off by switching back to the metallic thread and finishing off the tops of the clasps. It looks better now. 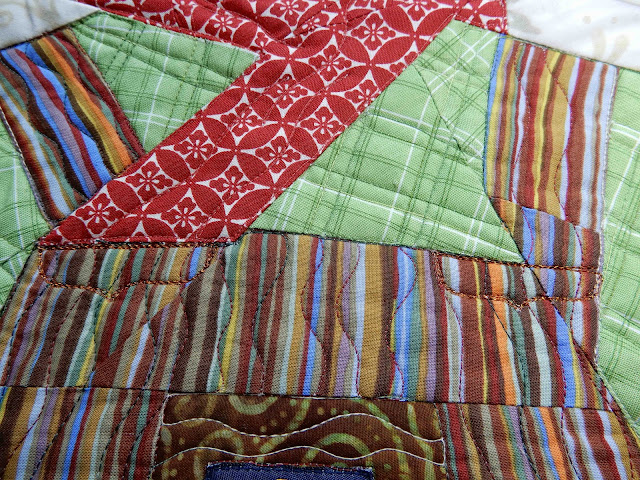 There are four buttons to add to the overalls when everything is said and done, and I'll glue those on last. 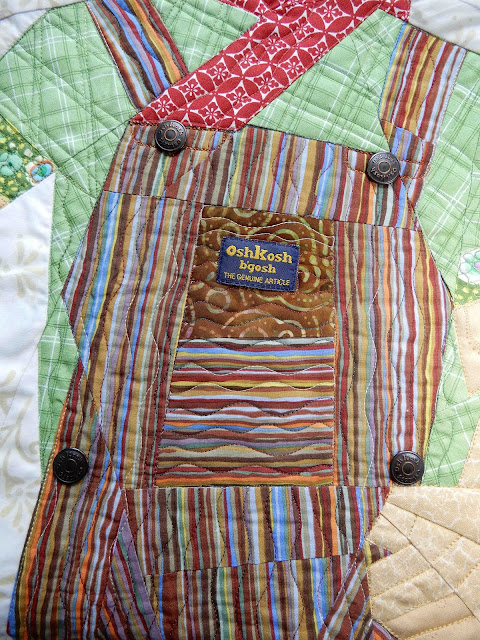 The only thing left now is the background. I've known from the get-go what design to use there. A while back I did a YouTube search for something like "snake quilting" or "quilting snakes" and came up with this video from Whirls and Swirls quilting. I like this, and it'll be perfect for the remainder of my quilt. If you can't see the video, click right here.

So, I'm hoping to have some time to get started on that today, but there's much to do...as always. There's some housework, but also a big grocery shop. We're doing great on the Cooking Light Diet. I've lost 6 pounds, and Mike has lost 8. We don't expect to continue to lose so rapidly, but it's a great motivator when your food sacrifices actually produce results.

The squirrels are keeping all of us entertained. These two are often seen tussling outside. 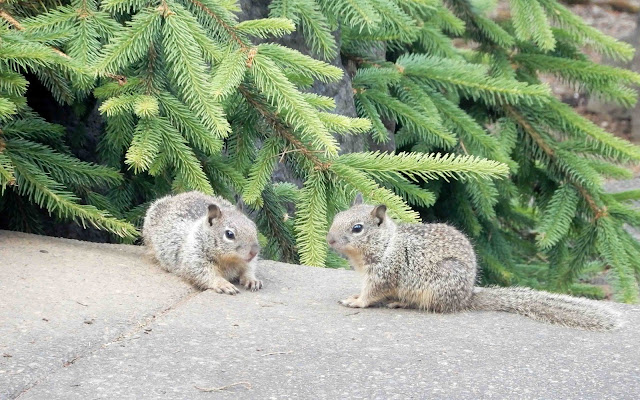 They're enjoying the strawberries. Having finished off the ripe ones, they're starting in on the green ones. This morning when I was out, I found the place littered with green strawberries, each with just one or two bites taken from it. 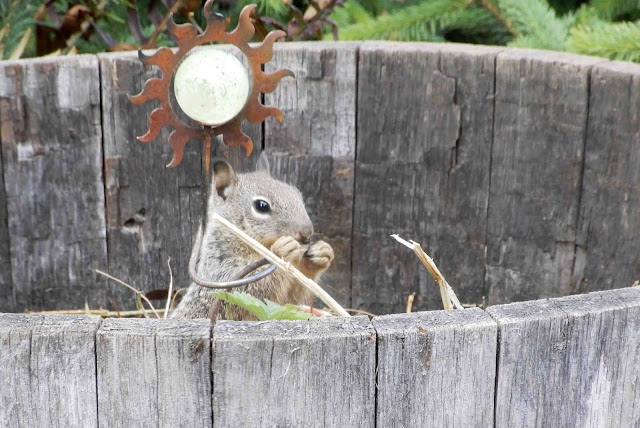 Smitty feels outnumbered by them, I think, and so he just watches them. They ignore him. 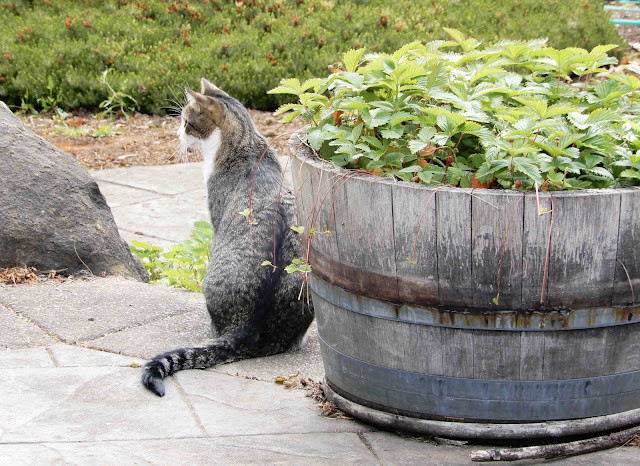 Yesterday was Miss Sadie's "Gotcha" day. We've had her for a full year now. You might remember that she wasn't doing very well health-wise when we brought her home. She had some kind of intestinal infection that eventually required antibiotics, and it gave this sweet little girl the worst gas! She'd pretty much run you out of the room with her, um, exhaust fumes. 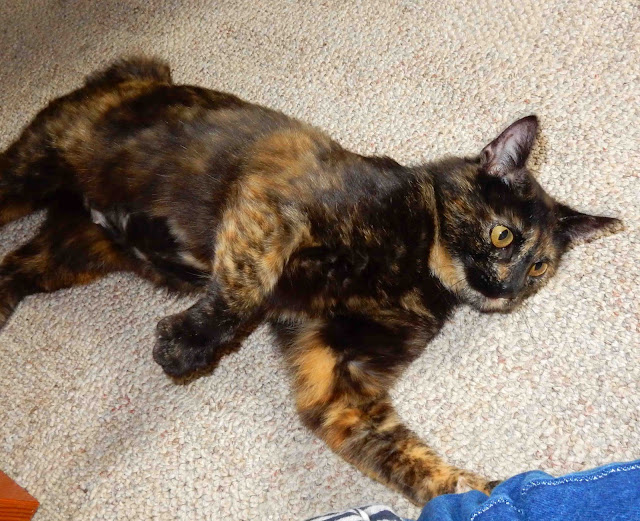 Also, she was infested with parasites, and it took a couple of rounds of worming to free her of a lot of nasty buggers. Her fur was coarse and seemed coated with some kind of residue. With a lot of TLC and brushing, it's now glossy and soft as velvet. 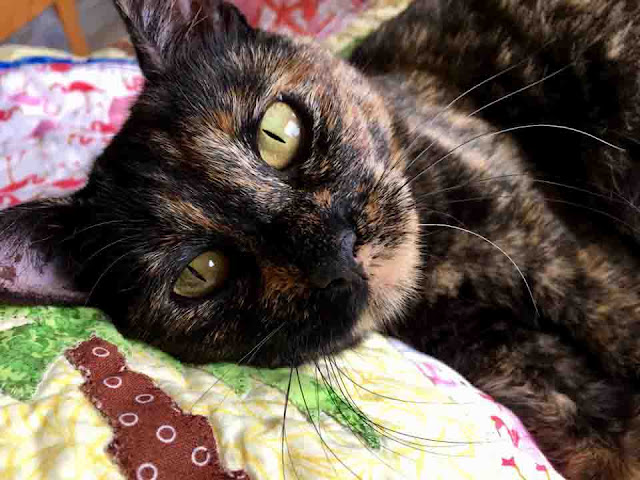 Smitty tried to act all badass when we brought her home, 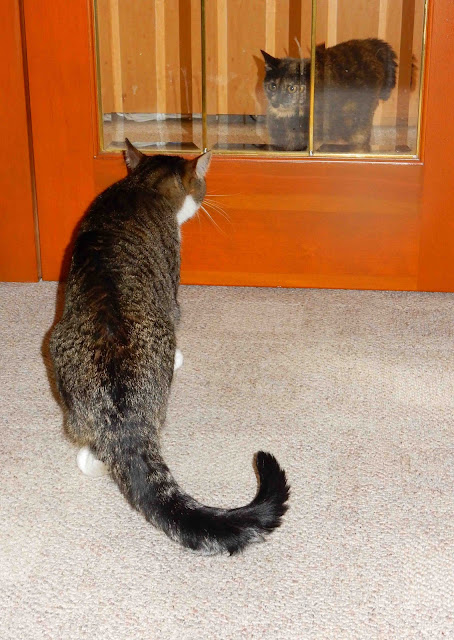 but even he gave in to her charms fairly quickly. 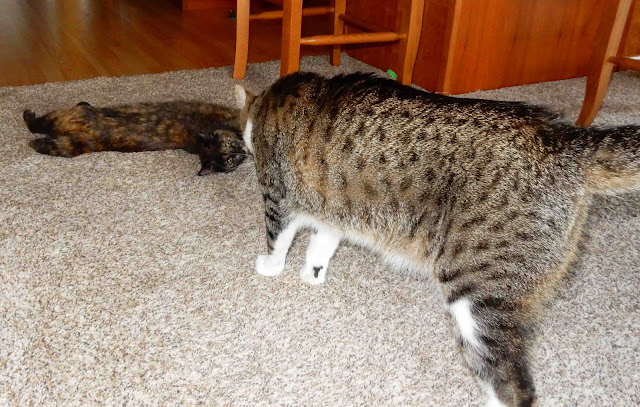 Now, they are the best of friends. It's nice to see this once anxious little girl so comfortable one year later. 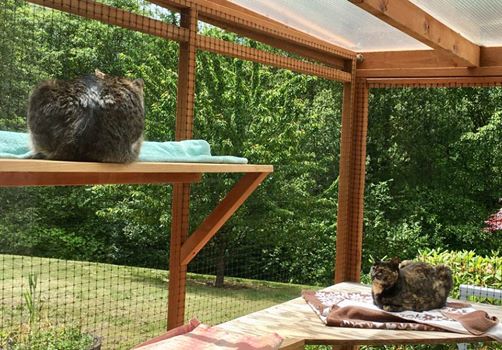 Also, I wanted to tell you about something I learned yesterday. I Found a Quilted Heart is a website that promotes leaving little quilted heart "ornaments" around randomly for folks to find.

When a heart is found, an attached note encourages the finder to post their find to the website. It's a random (and anonymous) act of kindness. Not only would it be fun to leave one for someone to find, it's a great way to use scrap fabric, ribbon, and batting. Suggested locations are public places such as a park, coffee shop, hiking trail, rest stop, amusement park, library, community center, hospital, town square, foyer, beach, nature trail, museum, tourist attraction, etc. Places where they should NOT be left would include personal or private property, airports, national parks, retail stores, or bathrooms. Check it out at that link I've given you. With the traveling we're going to be doing, I'm kind of excited about leaving them all across the country.

Finally, I moved the hoop on Hocuspocusville today. The bulk of the stitching is finished on this one since there is a lot of open space on the remainder. 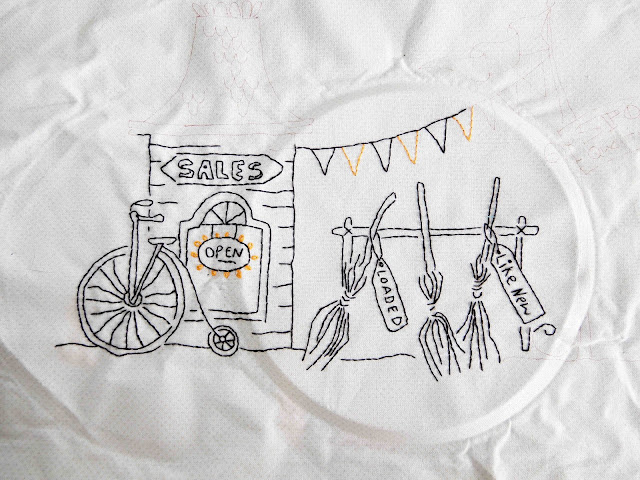 Mike has gone to have a window replaced in our truck camper this morning so that we can use the catio. We haven't yet tried taking the kitties in that much smaller space, and so we're looking at making some short trips soon just to see how it works out. As for me, I'm going to do a little housework, and then we'll head out to do our grocery shopping when he gets back. I'm hoping I'll have time to do some quilting today, but sometimes the grocery store wipes me out, rendering me useless for the remainder of the day.
Posted by Barbara at 10:09 AM

I love the way your quilt is turning out. You will treasure it forever. Thanks for the info about I found a quilted heart. What a wonderful idea.

Happy "Gotcha Day" to Miss Sadie. Grocery shopping wears me out too.

When I have a chore that finishes me off for the day, I try to schedule it for near the end of the day. This means I get the bulk of the day to do what I want when my energy is high and do the less-liked chore when I'm nearing the end of my productivity anyway. It works for me.

Grocery shopping always wipes me out...there are so many levels to getting all the food in the house and their proper places. It's like you touch the food five times just to buy it, get it home and put it away...GAH! Then you have to cook it and clean up after that...food is a time stealer!
Today I have to mow the dog yard. I was going to weed eat it too, but I already tried to get that bugger started and failed. I came in the house and finished my emails and played a little Pogo to calm my frustrated self down, now I am going to go and just mow, my mower is a lot nicer to me! I'll leave the weed eating for my daughter when she comes by this afternoon.
Your Boy & Snake quilt is looking fantabulous!

Goofin' Off Around the Block said...

Barbara, I have to admit your Snails and Snips quilt is probably one of the ones look forward to seeing updates to the most right now. You've made perfect choices for the different quilting designs you're using for each space. I'm learning a lot just from reading and seeing your work. Thanks for sharing your work. --Andrea

Your quilt honoring your brother is so precious. It's awesome on its own, but the memories behind it make it even more cherished. Your brother would be so touched and proud.

Fabulous!!! You did good. Don't feel smiles floating down on you?
The hearts are precious and what a great way to use scraps and have fun. With your travels you can plant them all over the place. Thanks for sharing.

Some of the local guilds and church sewing groups did something similar last year to be part of the one local community's 175th Anniversary. We left 4" mini quilts with inspirational notes attached all over the place. It's hard to believe - one year!! The quilting is going so well on Snips.

I just love it, and the quilting really makes it fun with the movement.
My kitties tolerate each other and Moki is a smart alec, he likes to tease Izzy and back her into corners and the more she hisses, the more he keeps it up.

I like the face. I did not mean to imply that you should add a tattoo to his arm, my minds eye got a glance of the design in the fabric and went off in left field!


The Quilted heart sounds like it would be fun, especially on a long trip!

Happy Gotcha day Sadie! Did you have a party with lots of treats?
I really love the heart project, I think finding one would be really special for people. I read through the rules and wondered about the airport rule, then I thought about seeing a heart in the news with a story about an airport evacuation, what a weird world we live in. I also think sending them anonymously to people who need a smile would be a good thing, but against the rules.

I too say Happy Gotcha Day to Sadie. Throw a party, maybe invite the squirrels. Haha! I hate to grocery shop. I used to enjoy it, but now it's just one of those necessary things that takes me away from quilting. I love the heart project idea. I think it would be fun to leave one and to find one! Hope that catio works out!

I love the way his quilted face turned out. Every step you take with this quilt adds to its charms.

Three cheers for Miss Sadie! Has she grown since her arrival? In the first picture, she looks rather petite. But that may be because she's able to benefit now from all the good meals and TLC, as her intestinal issues are resolved. So glad she and Smitty are such good buddies these days.

Thanks for the heads up about the little hearts program. That might be fun to do when our nieces visit this summer--a way to play in the fabric scraps, introduce them to the sewing machine, and be part of their campaign to spread love to the world. (Not an official thing, it just seems to be an everyday impulse with these sweet girls.)

How nice to see the changes in Sadie, and to be reminded of Smitty's open heart. Speaking of, I love that heart idea. I've started to set scraps aside and hope to have my first heart ready this weekend. Let the lurking begin! :)

The quilting is coming along beautifully. Happy "permanent home" day to Sadie. I wasn't too sure you'd ever get the both of them to tolerate each other.

Oh! Happy belated Gotcha Day Sadie!! It's so wonderful to see the changes over this last year. She is a beautiful girl!

Cool 'snake' quilting for the background on S&S.

Sounds like some fun to make & leave quilted hearts around for folks to find. I may send a link to my guild's newsletter about that.