Opening the Doors to Quilting

Usually at the beginning of the month, I give myself a week to work on whatever I want. Then, on the Monday following the first full week of the month, I get down to business with whatever quilting project I've set as a goal. I'm not sure it always works out on that kind of time schedule, but whatever...

It so happens that today is the day I told myself to start quilting the Doors of Ireland. This quilt has been patiently waiting its turn, which would be in keeping with the demeanor of the Irish people. They were the friendliest people I've ever met in my travels, and so it makes sense that the Doors would submit to many a catnap while it waited its turn to reach the top of the pile. Furthermore, it gave me lots of time to think about how to quilt it and to gird up my loins enough to jump in. Like anyone, I go after free motion quilting with no small amount of terror at the possibility of QFUBAR. (I just no made that up. Who in the class can tell me what it means?)

With that in mind, I give you the last picture taken of this quilt top when I finished piecing it a couple of months ago. 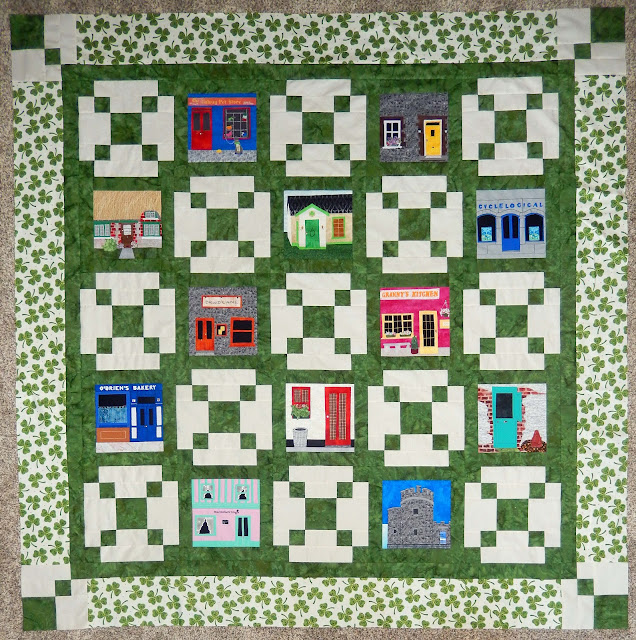 When I look at this quilt, I see interlocking green squares around the doors and "X" blocks of the Irish chain. With that in mind, I got it in my head that I could quilt interlocking straight lines on either side of the green sashing strips that would suggest Celtic knots. Not bad, huh? But then the more I thought about it, the less certain I was about how to accomplish it without simply stitching back over lines I'd already quilted.

This morning, I printed off the same photo in black and white (because I'm very stingy with my expensive color ink), with a mind to try to draw the lines and see if I could make it work. Great idea except that I couldn't see the lines I was drawing regardless of whether I used pencil or pen. That meant taking it downstairs to the sewing room where I put it upside down on the lightbox where I could both draw and see at the same time. Genius move, if I do say so myself...and I do.

I'm not sure how well you'll be able to see this, but here's what I ended up with. 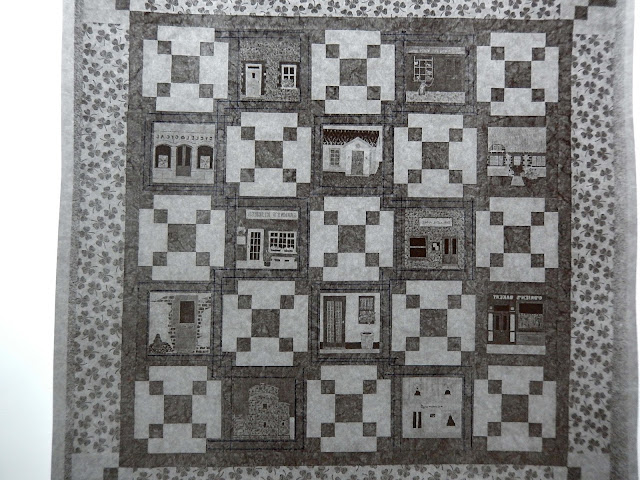 You can see it better if I turn off the light. It works, except the way I've done it here, I end up with sections where the quilting doesn't intersect. I've drawn an arrow where it looks the way I want it to look, and circled where it doesn't. 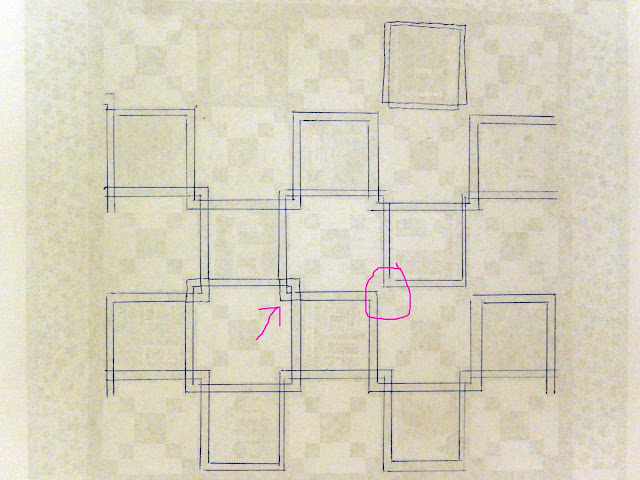 So, what to do...what...to...do? I could just quilt in the extra lines, but that seemed like a nightmare of stops, starts, and breaking thread, not to mention burying a million thread tails. Then I realized that all I really have to do are a series of rectangles. That's still going to get me a nightmare of stops, starts, and breaking thread, but I think it'll be easier to do. Without explaining it, my original idea was going to require I set up my GPS navigation unit to keep myself sewing in the right direction. I won't explain this because it's impossible, but I'll just stop right here by saying that I'm pretty sure I know what to do now.

As for the rest of the quilt, I'm going to quilt shamrocks in those "X" blocks, which I'll show you when I get one of them finished. And I'll also be quilting details into the door blocks. My plan is laid out, and that's half the battle when it comes to free motion quilting. The only question I have in my mind now is whether to attempt to use gold metallic thread in some of the quilting. It would be very pretty and striking, but I'm not at all sure I can pull it off. And even if I can, am I masochistic enough to try? These are all questions that will be answered very soon.

Yesterday, I finished the next block for the Chicken Buffet quilt. This one is Chicken Divan. 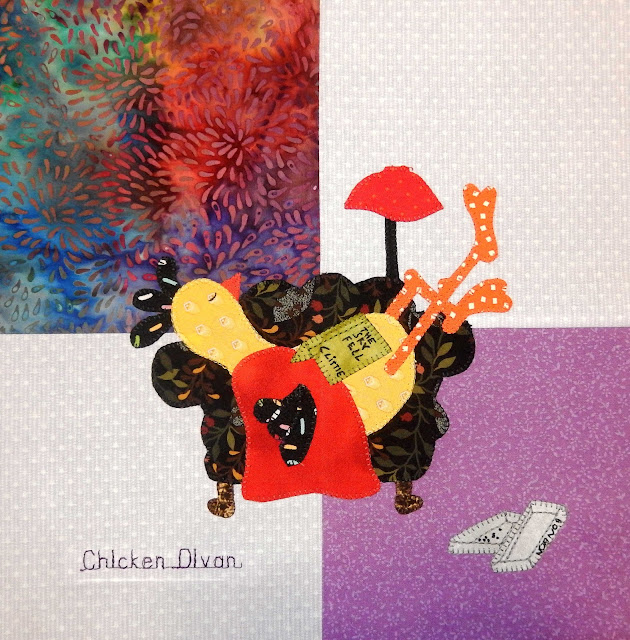 This block isn't completely finished because eventually, I'll be adding some beaded fringe to the lamp shade and a pearl necklace to the chicken. I have the beads I need, but I have to decide whether to add them now or wait until it is quilted. I'm leaning toward now, but still trying to decide.

The next time I work on this quilt, I'll be doing the "Fried Chicken". Aren't these a hoot? 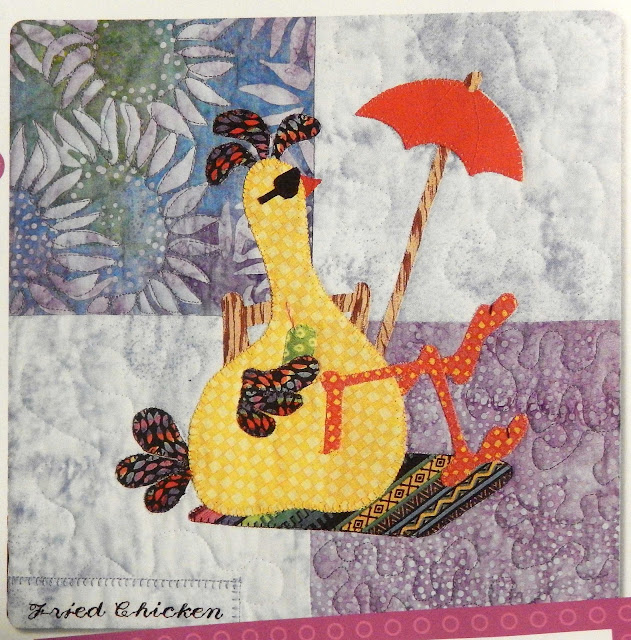 These are the two I have so far: 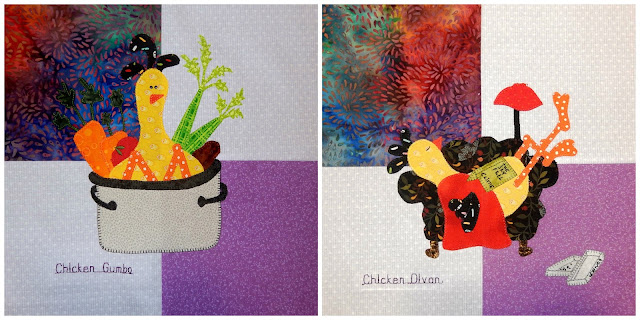 This is my project for this month's Let's Book It Challenge. 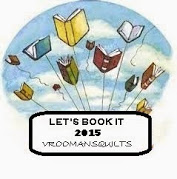 Have you heard the good news? Let's Book It, the brainchild of Sharon at Vrooman's Quilts, will be back in 2016! Sharon encourages us to pull those dusty books off our bookshelves and make something from them. So many quilts grew because of the Let's Book It challenge that would otherwise still be a twinkle on my sewing needle. Here are a few of the quilts I've made as a result of the challenge, some finished, some not. Since I have a lot of large quilts already in the works, I focused on small quilts and table runners for the most part. 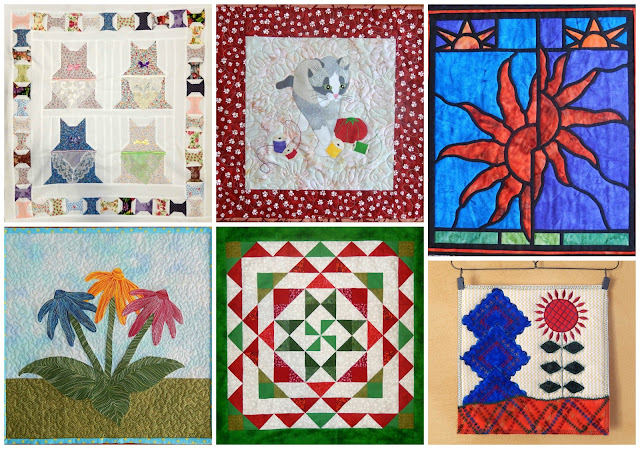 I learned some new techniques along the way, including thread painting, stained glass applique, making quilts using my machine's fancy stitches, inset circles, and a whole lot of practice on other techniques. 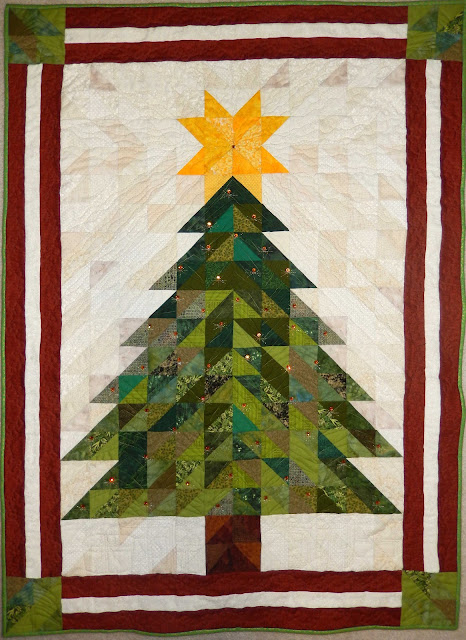 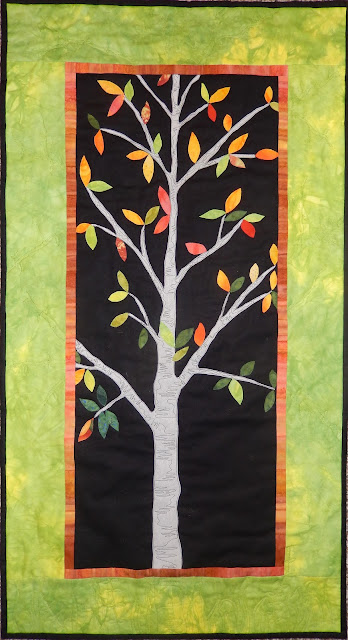 Some of these quilts live with me and decorate my walls and tables. Some have been given as gifts, and now inhabit walls and tables in other parts of the world. It's been great fun, and highly motivating. If you haven't joined in before, you still have another year to get with the program.

Finally today I want to thank you for all your kind and encouraging comments regarding yesterday's post. After I finished, I started thinking I should cut the lowly saguaro cactus so maligned in yesterday's post some credit by giving you a little addendum from a very old blog I once wrote called "Ribbon of Highway". I wrote Ribbon of Highway while Mike and I were on a winter-long journey to escape the rainy weather of our Oregon homeland. While on that trip, we discovered some fascinating information about the saguaro cactus, and I'm repeating it here for you if you're interested. It actually spanned two different blog posts. And just for grins, here's another image of the saguaro cactus from that same trip. Saguaro National Park is divided into an east and west portion. This image is from the east side. Those are the Rincon Mountains in the background. 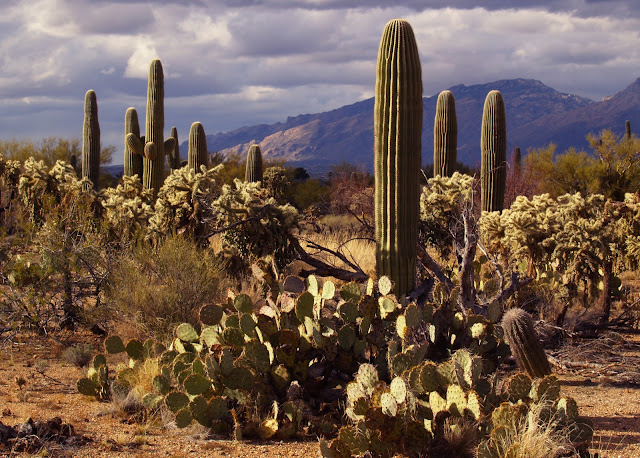 This is what we learned about the Saguaro cactus:


The saguaro blossoms in late spring and only after dark. They are pollinated by bats during the night, and then the blossoms close and wilt by the following afternoon. One saguaro cactus will produce approximately 40 million seeds each year. Many of the cactus live some 200 years, but in their lifetime "only a few" seeds will even so much as germinate. After one year, a healthy, well-established saguaro is only a quarter-inch tall. After five years they are one INCH tall. A fifteen-year-old saguaro is barely a foot tall. Only after sixty or seventy years does the first side branch appear.

Given all of that, it's amazing any exist at all, and yet, there they are in numbers large enough to warrant their designation as a national park. Amazing.

I don't recall ever seeing Chicken Buffet before - what a hoot! Oh, wait, wrong bird ...

Looks like you're all set for the quilting. I agree that deciding on stitch patterns and pathways is a daunting task for the special quilts like this one.

Haven't done a "Book It" in a while but have something I have to finish for December so reading this reminds me to post it there when its done. Those chickens are too funny!!!!

Well shoot, I missed the blog world yesterday since life happens, but I missed a lot. Yea! for Let's Book It, I'm happy to hear that and I'll catch up on your poor cactus post and can't wait to read those comments.

Takes it forever to get big enough to even see. No wonder most don't make it

I like your plan for the Doors of Ireland. Your Chicken Divan block is a hoot. That one is going to be another fun quilt. I thought Sharon had decided to stop the the Let's Book It. I'm glad to hear she's going to keep it going next year.

Don't know why I missed this post - you are well on your way with the Doors now and I love the chickens - thanks for linking up.