Thanks to all of you who chimed in about the circle technique I showed you from yesterday's post. Dawn White didn't know who came up with the idea originally, and she didn't say who she learned it from. Some of you recognized it as Dale Fleming's technique. Once I knew that, I went in search of her book and purchased it. I'm interesting in seeing what she does with some of the other shapes. 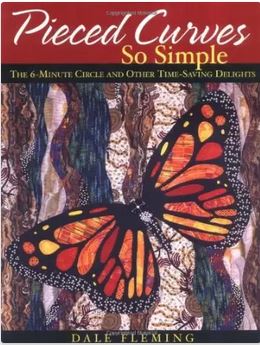 There's a table runner pattern I've had my eye on, but I've been too chicken to give it a try because it has some set-in leaves. Maybe now I'll be able to do it. Also, the butterfly on the cover of that book gives me some ideas about how to do one of the blocks for Lisa's retirement quilt, Live, Love, Teach. We'll see. It'll probably be a week or so before I can take a look at it.

As for the circles I've been making, I was so jazzed about the new technique that I pretty much turned into a recluse in the sewing room until I'd made all of them for the table runner pattern I'd picked out. It was such a welcome relief after spending weeks in Paper Piecing Purgatory that I could barely think of anything else. If I'd had more of them to make, maybe I would have gone without food and water. Maybe I'd have lost some weight! Or not. There are still those veggies to contend with, after all.

Anyway...I did two of them on Saturday. Then Sunday morning I was up bright and early finishing up the three remaining circles so that I could start sewing my table runner together.

There were two with the dark purple background. 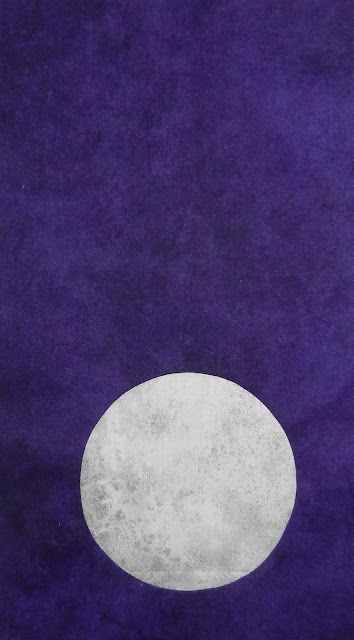 I'll say I had a little bit of trouble getting the freezer paper to adhere to this purple fabric. I had a couple of ideas about this. Either the iron was too hot (not my preferred explanation), or else there was some residue on this fabric that kept the freezer paper from adhering (the more likely explanation). I'm wondering if any of you have experienced that problem. I might also send an email to Dawn White and ask for her thoughts about it. 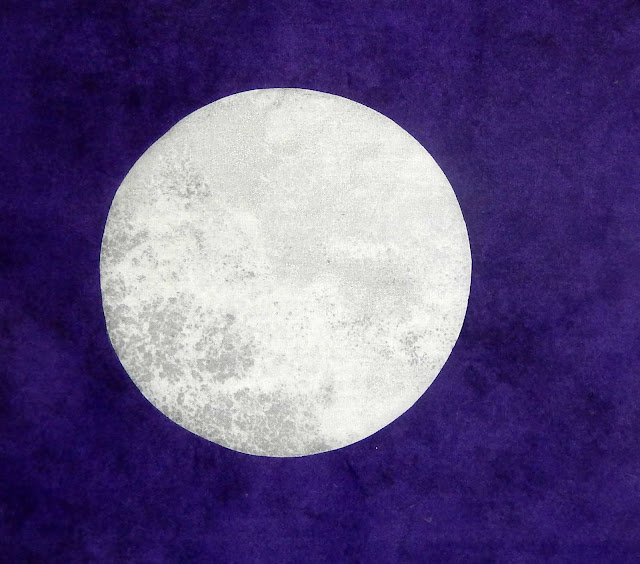 Either way, it worked out okay. Once I had the little clipped flaps glued to the circle template, it didn't matter that the rest of the paper wouldn't stick to the fabric. When the purple ones were finished, I had just one more in this blue. 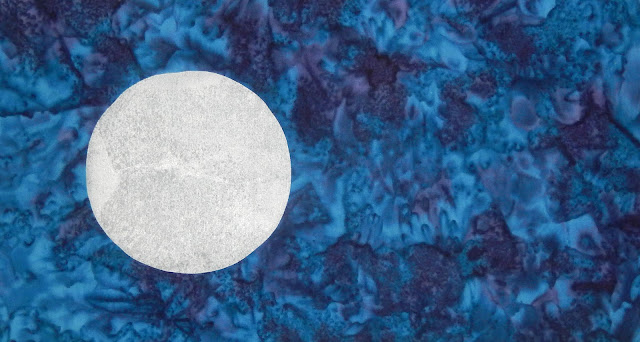 About that time, we left to have Father's Day brunch with Matthew and Valerie. That was very nice. Here's how it was looking as we walked out the door.

When we got back, I sewed it together and it was finished.

Of course, it still needs quilting and binding. My goal is to have it quilted no later than July 20th, the date of the next guild meeting. I'd like to be able to take it for show and tell then.

After that, my sewing room looked as if a bomb blew up. I didn't even put things away after getting home from my class. I just grabbed out the things I needed and went straight to work making more circles while my feeble brain could hold onto what I'd learned. 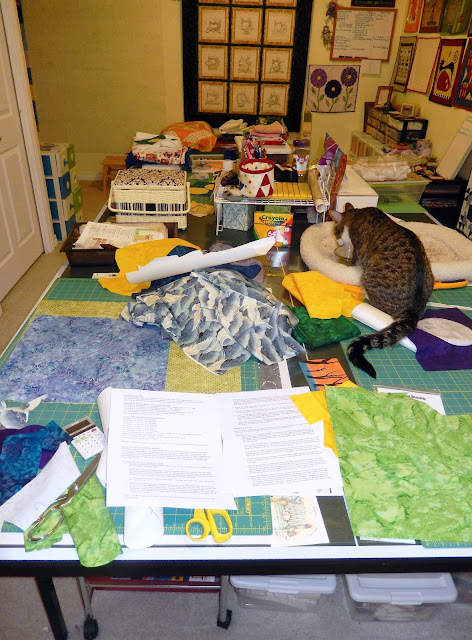 What? You were thinking there wouldn't be a cat in the mix? He's getting his catnip fix. 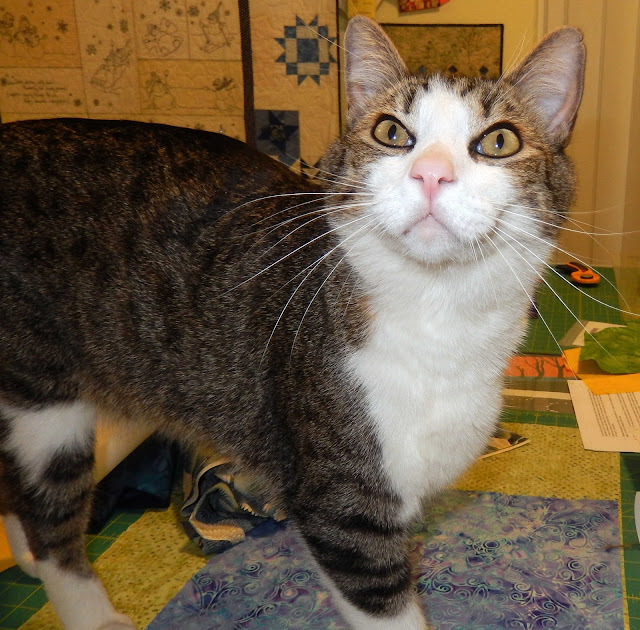 Yeah, he's pretty much a catnip fiend. I should have talked to him about the evils of catnip, and now I'm afraid it's too late.

So I've been a total slouch about housework for the past week, although I've spent a good amount of time getting reorganized after our trip to Whistler. Today I'm going to try to get caught up on that, and I'll probably have time to do a little sewing. The month is growing thin, and there are still at least a couple of items on my to-do list that I want to finish for sure.
Posted by Barbara at 7:26 AM

Love the table runner - you learned good! I love the mess - the box of crayons caught my eye, not the mess. My furkids are lovin' on the fresh nip outside - that store bought dried up stuff just doesn't suit their taste now.

I too love seeing your creative mess! You circles look great!

Whoa! That is the PERFECT fabric for moons! And you gotta love a great creativity bombshell room. :)

Thanks for posting a picture of that Dale Fleming book - I have that book and never used it! Your tutorial was very good but it's always nice to have a reference right in front of you especially if you are me. Love the table runner and your creative bomb makes me laugh out loud for sure!

That looks amazing! I think there probably is something on the fabric also, I wonder if you washed it first if that would fix the problem.

I think Kitty is in "Happy Land"!!!! LOL!!!!! Your table topper/runner is stunning.....sort of a "Pale Moon Rising" theme. I couldn't place where I'd seen that circle idea demo'd but, now that you mention the Flemming name, it clicked. Your tute was awesome as is your flimsy. Can't wait to see the finish!!!!! Housework can definitely wait!!!!!!!!

I was just thinking how tidy your sewing room looked. Which gives you an idea about mine...

The table runner is looking great. I love all those jewel tones.

THat is pretty! You did a great job!

I'm with Gayle - the room looks pretty organized to me! The circles look fabulous too. I need to get going on the flimsy for the class I'm teaching the end of July for guild. Ugh. No mojo for sewing lately.
I just love Smitty's eyeliner....

I must have missed these posts on your circle Barbara - they're wonderful!!! You've done such a wonderful job making them look perfect. I'm headed back to read your earlier posts on this now :*)