It's a bright, clear, and chilly morning here. The temperature has actually fallen to a brisk 22°F since we've been up . It was quite windy yesterday, but the wind has died down this morning. We haven't received any snow yet. It's often in the transition to warmer and wetter weather that we end up with a good snow or ice storm. It would be nice to have a little snow. As for ice, I'll pass. Thanks.

Smitty is none too happy about this cold weather. A cat could freeze his tail off. 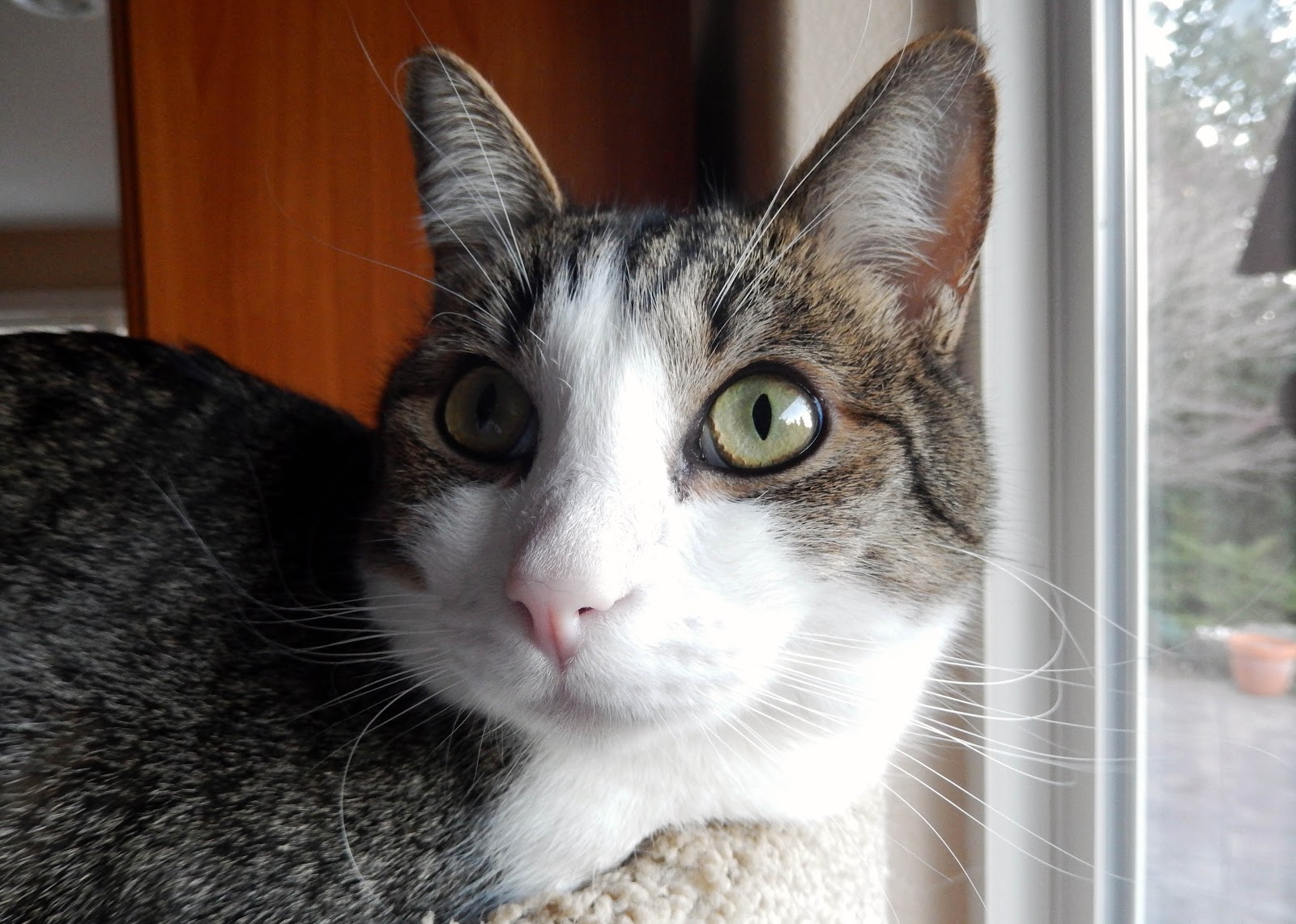 As far as he's concerned, this weather is for the birds. He'll just watch them from this window right here.

Even the birds can't be too happy about it, however. We've been keeping their feeders filled, but the poor hummingbirds are greeted by a frozen feeder as often as not. We keep switching out the frozen for the thawed feeder, but it's a daily, and sometimes twice-daily chore. Surprisingly, we have Anna's Hummingbirds year-round where we live. 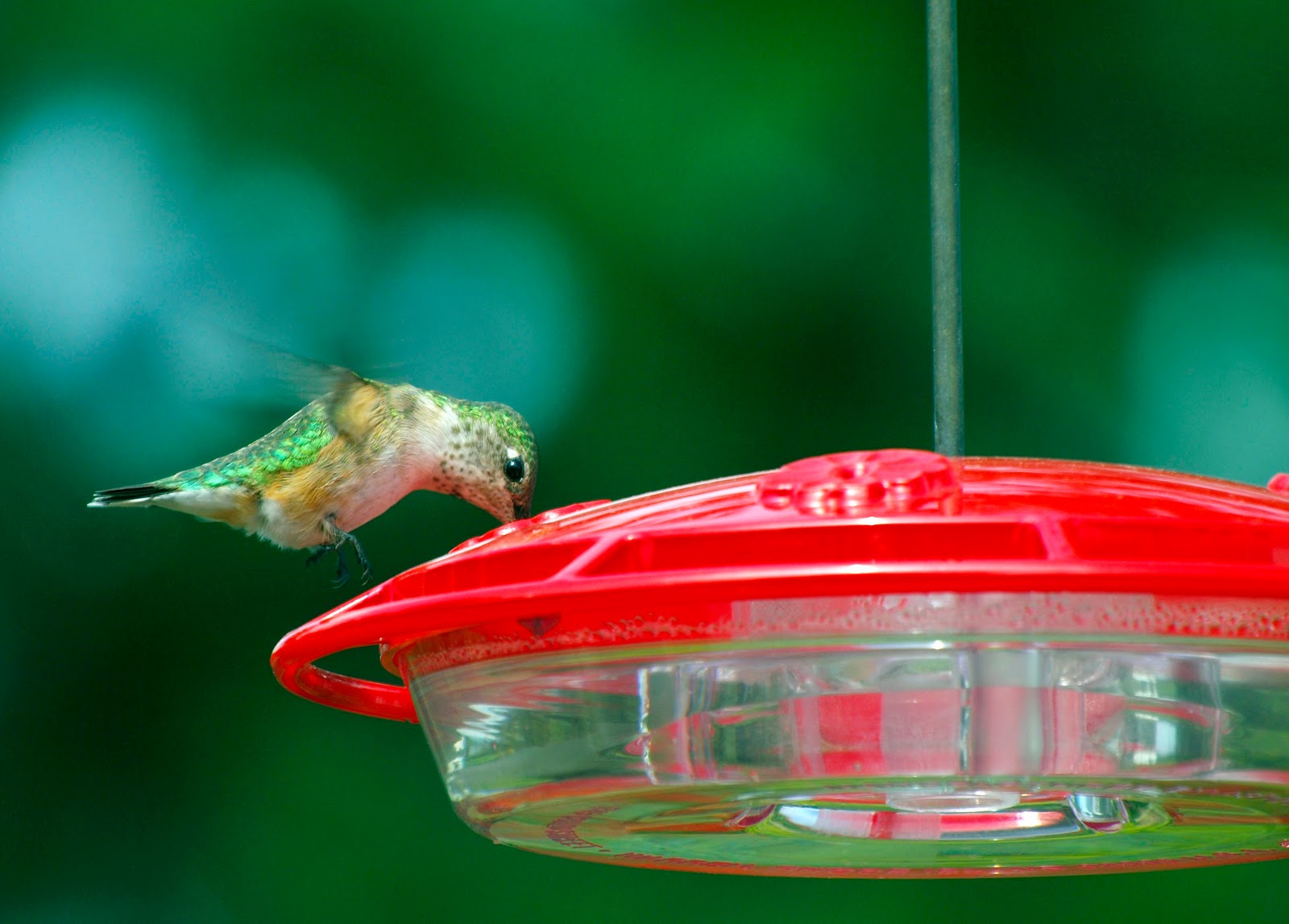 The Audubon Society of Portland gave us some helpful tips about caring for our hummingbirds in cold temperatures.

It's going to be a busy day here at the Three Cats Ranch. The kids are coming up for a New Year's Day dinner of ham, and so I'm making a salad and a cheesecake today. Today's cheesecake is a Luscious Lemon Cheesecake. Since I just made a different cheesecake last week, you might assume that I'm in a cheesecake mood. It's actually my response to Erik's claim that last week's cranberry cheesecake was the best cheesecake he'd ever eaten. I think he's going to like the lemon cheesecake even better. We'll see. I'll be sure to report back later.

So despite needing to get going on cooking and household chores, I got a start on the first block for the Gingerbread Square quilt this morning. 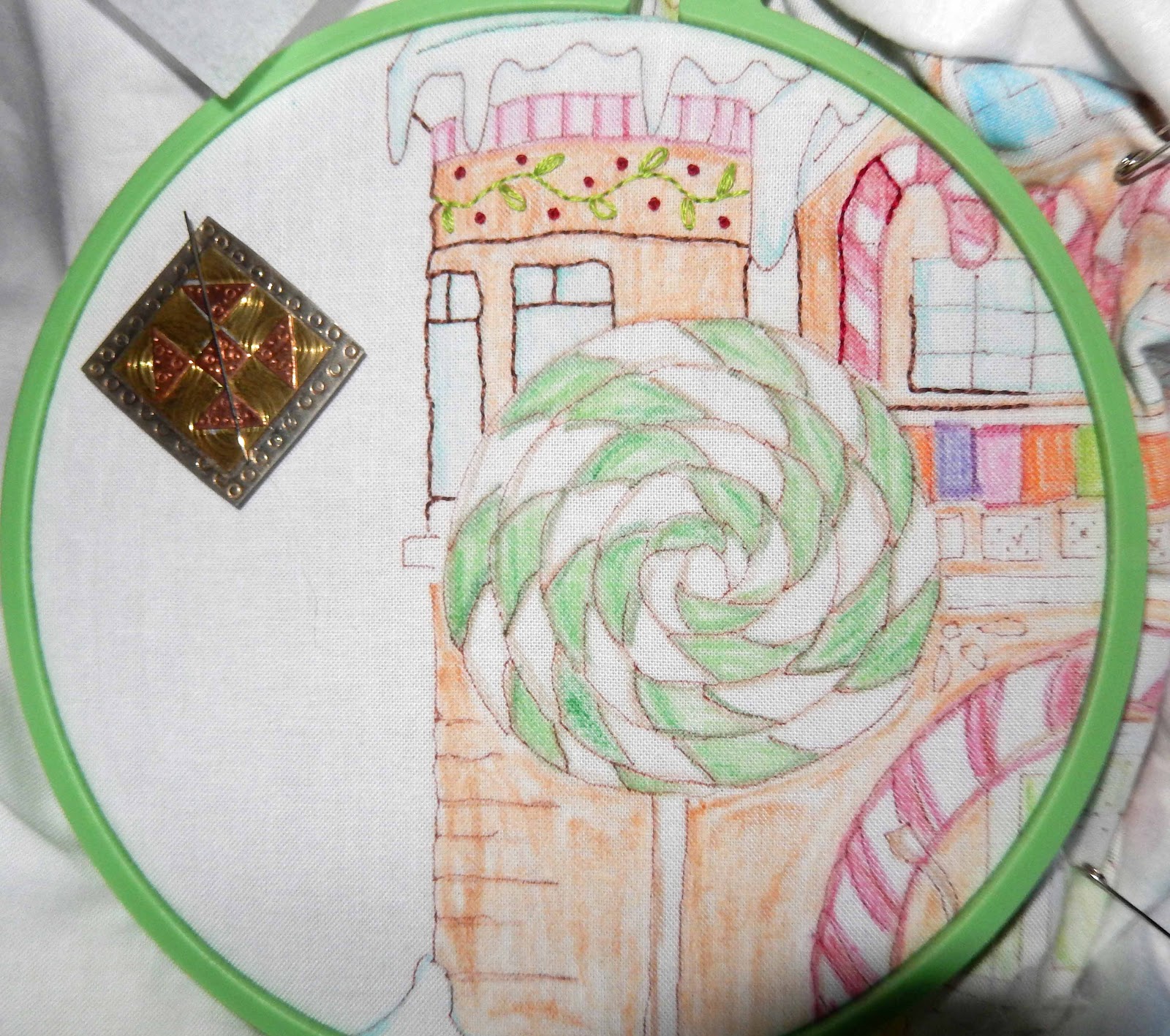 It's my first time using Cosmo floss, and it's very nice. I can't say I'm finding it either inferior or superior to DMC, but it does have a nice sheen. Someone in a quilt shop once told me that it's color fast, although I believe DMC floss is also color fast. Whatever. It's working, and I'm happy with the colors.

As long as I was doing that, I perused a book I purchased recently. Have you seen the Bobbins Bargains at Kansas City Star Quilt Store? Each week they offer a book at a very low price...something like $4.95 plus shipping.... Once you buy five, I think you get a freebie...or something like that. Don't quote me. Anyway, this is the third of their bargain books that I've purchased. When the email ad comes out, there's a link to a video that shows you the whole book. It's nice to see what you're actually getting.

I love books that teach me something or have some sort of theme. Being a poetry fan, this one appealed to me. This book is going to supply me with my "Let's Book It" project for next month. 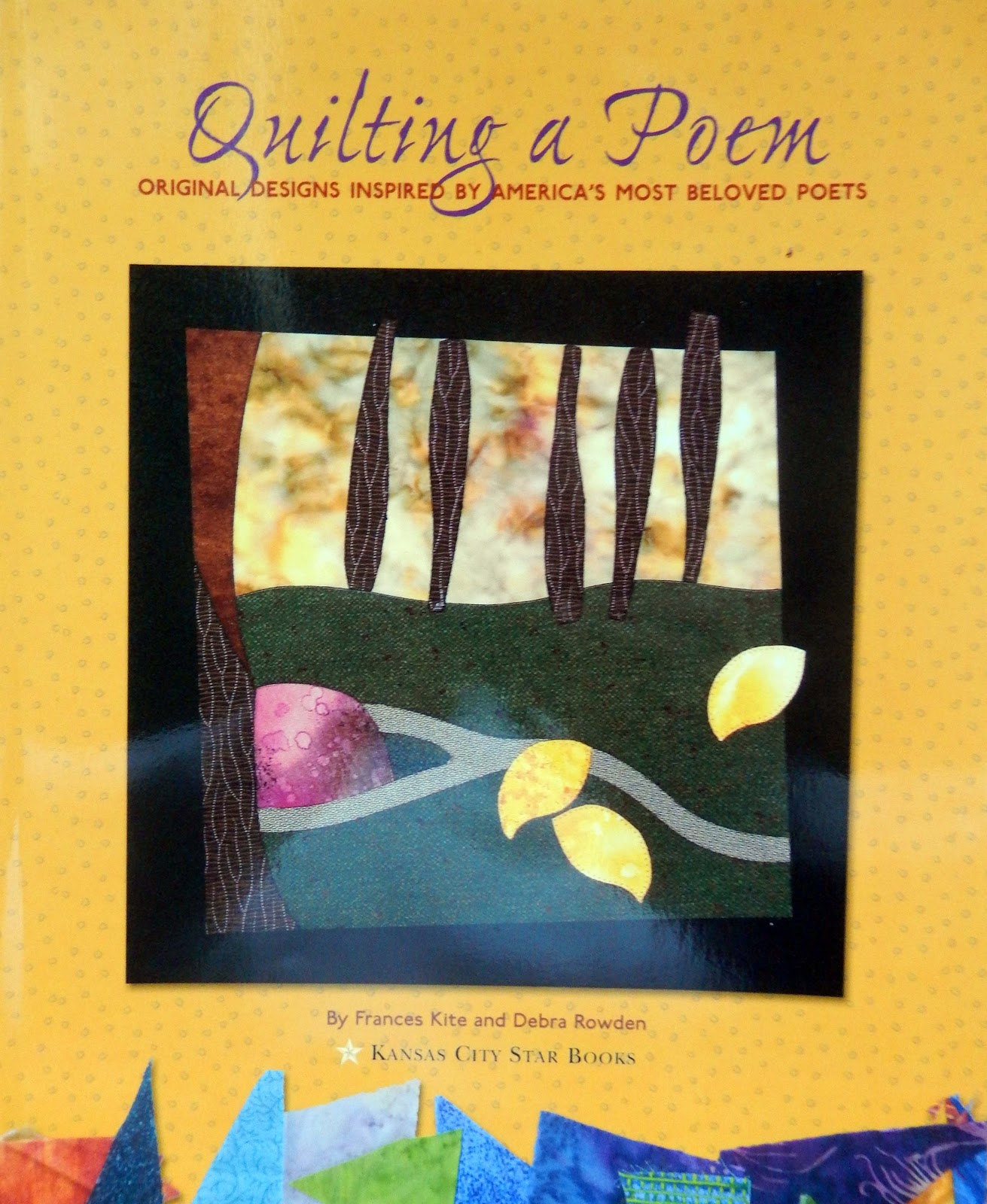 It'll also make a good choice for a little doll quilt swap that's due in April. I kind of liked this poem inspired by Edna St. Vincent Millay's poem, Feast. 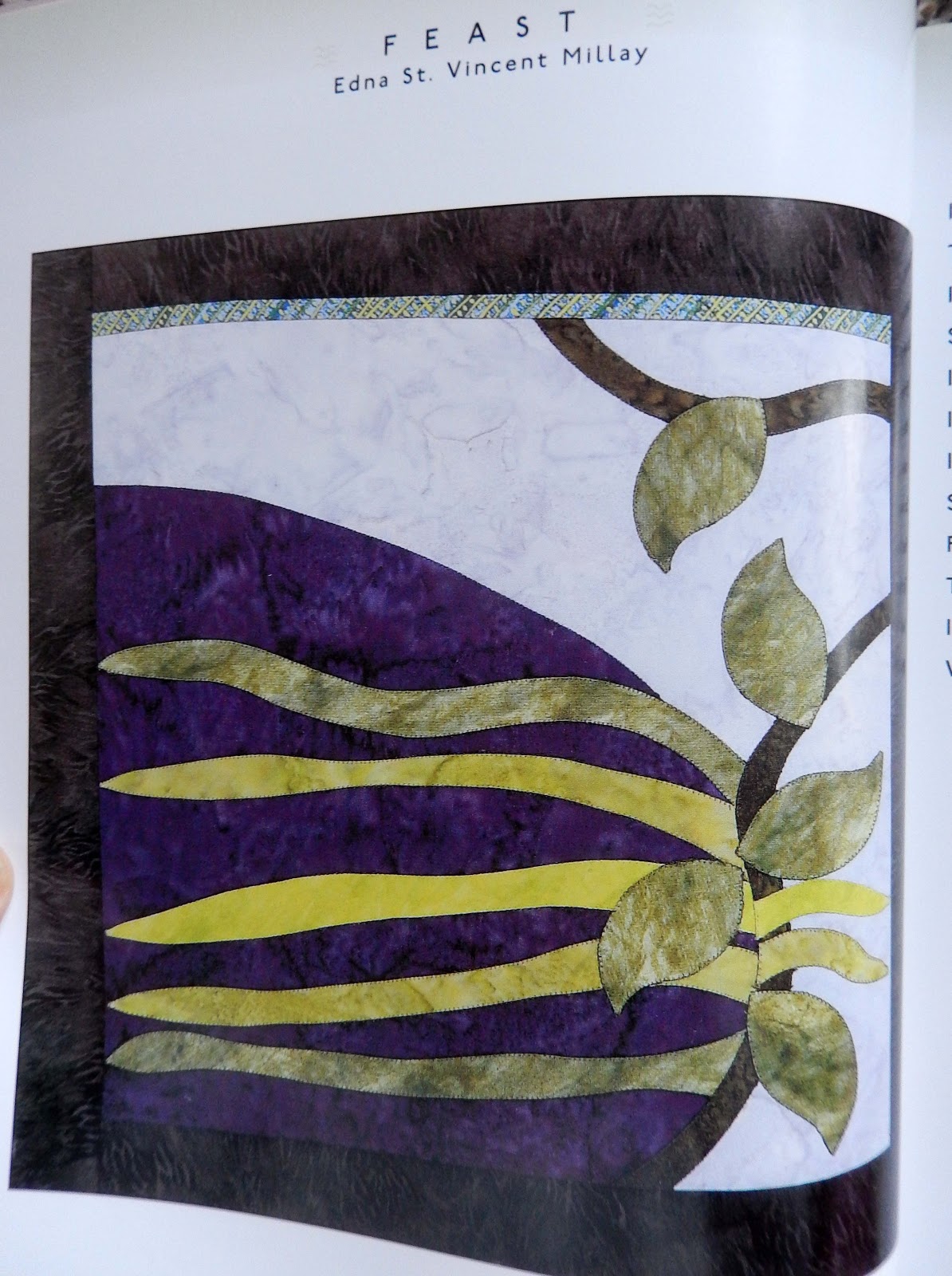 Here's what the book told me about the poet, Edna St. Vincent Millay: 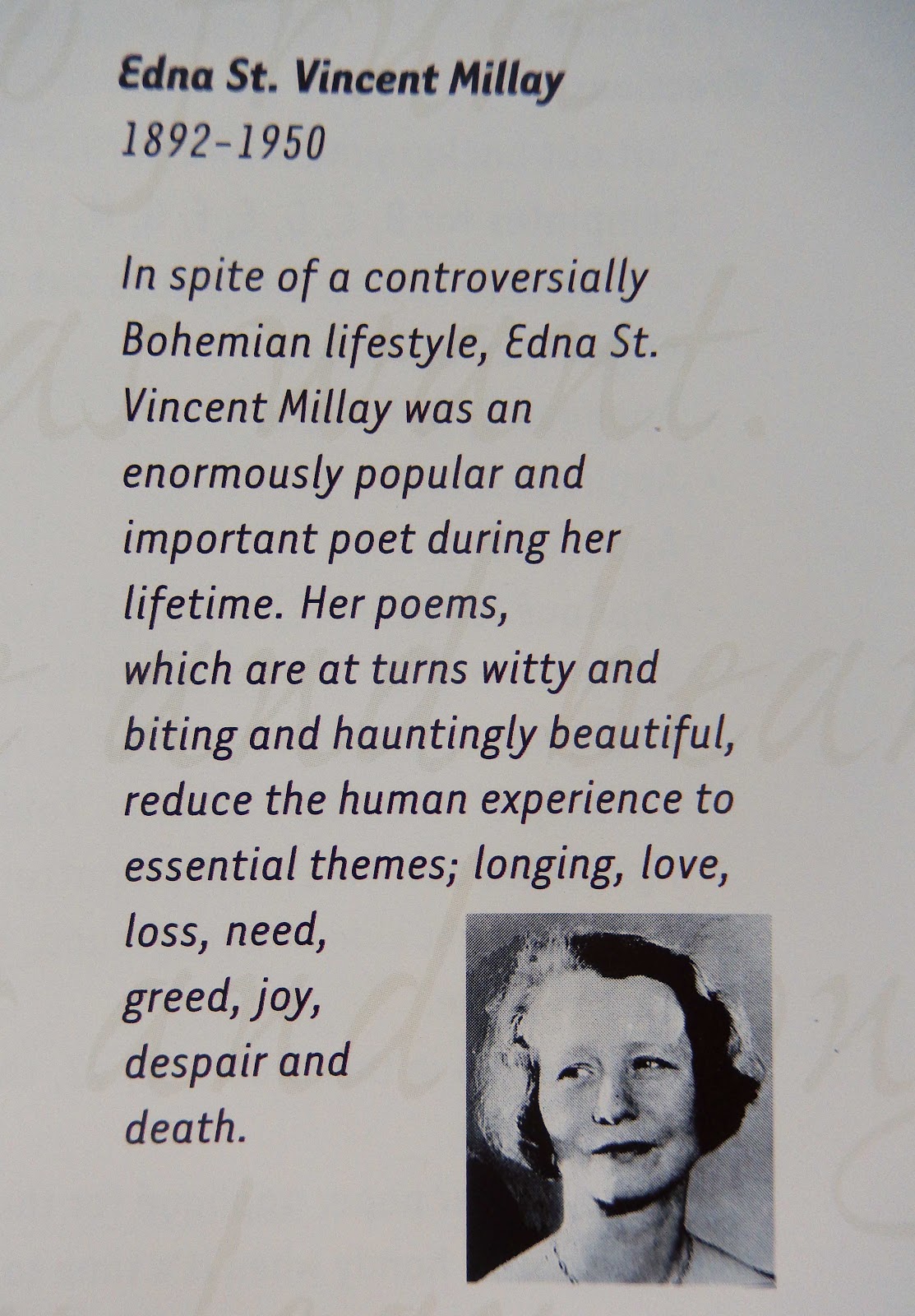 "Bohemian lifestyle"? I think I would have liked this woman. Here's the poem that inspired the quilt. 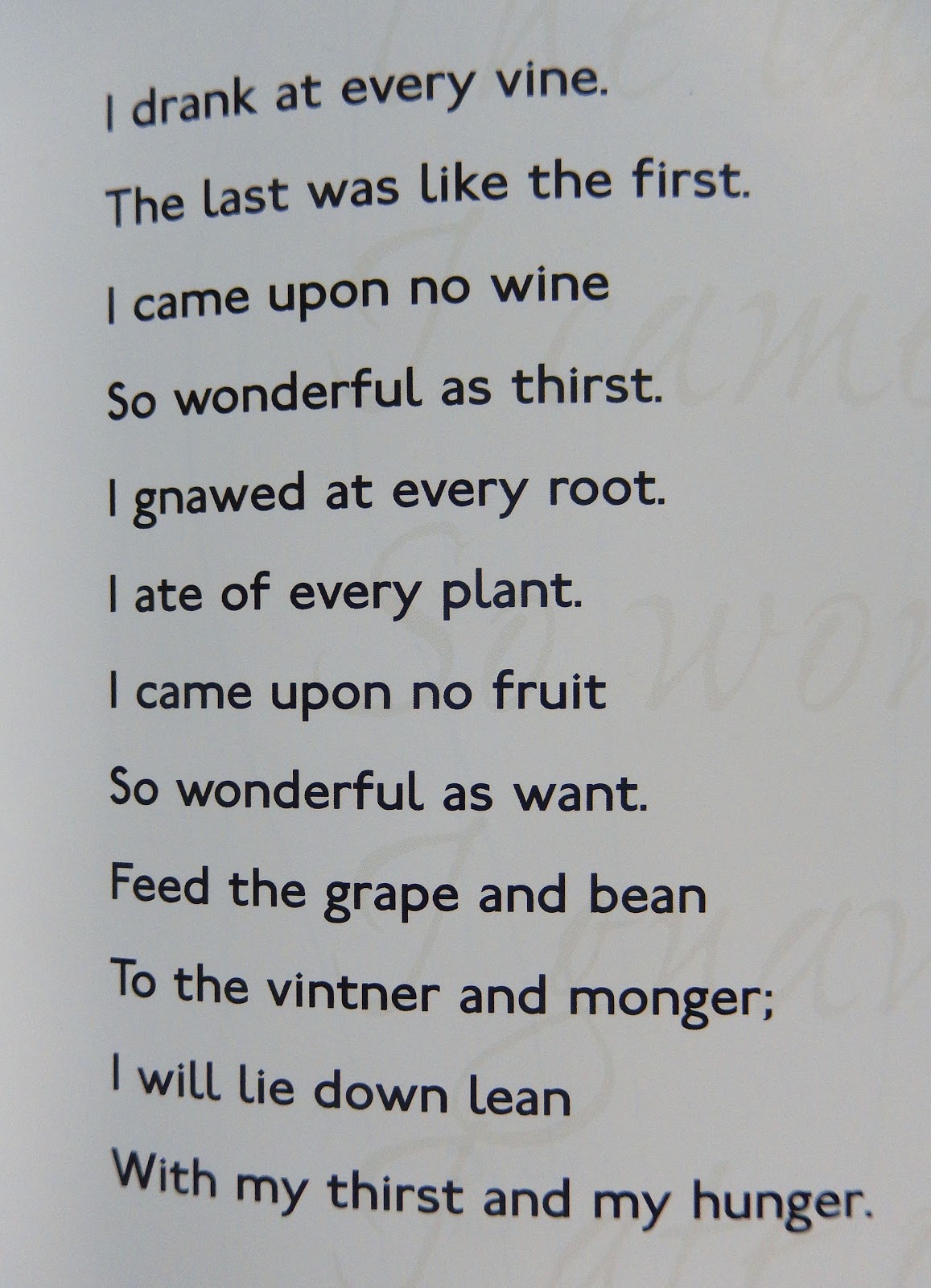 Yeah...I'm not really that kind of abstract thinker, but I still like the quilt. And the poem.

So...lots to do today, and I'd better get at that cheesecake. Cheesecakes aren't difficult, but they are a bit of a time-consuming production. My cream cheese is at room temperature, and so I'm ready to go.

How are you spending New Year's Eve? As for us, we'll probably sleep in the new year, as we have every year since the Millennium. The Millennium seemed like a big deal, and every New Year's Eve since has paled in comparison. Whatever you do...be safe.

happy new years! LOVE the hummingbird pic, I got a new camera, so need to play with it some more and get good closeup with the bouquet effect..... got a good cheesecake recipe? my husband has been trying several and they are okay, not great, my friend gave me a recipe for a cheater one and it's SUPER sweet, but awesome....

Happy New Year Barbara. Thank you for a year of blogging - yours is always at the top of my list. Looking forward to more of the same in 2015. Oh, and like you I will sleep in the new year.

Interesting book. No snow here, but we went from near 50's down to the teens in a day - and with us for the next few weeks. Enjoy dinner, family and the New Year.

It is getting cold, bone chilling so. I saw a kitty like smitty in our back, a few nights ago and noticed someone missing one in the area, so i let them know and watching in case he comes back and i can get a better look. I do like abstracts and would like to do more art quilting this year.

Good thing Smitty doesn't live here because it has only been in the mid teens here the last two days with below zero wind chills at night. Enjoy your time with your family tomorrow. Wishing you and your family a Healthy and Happy New Year!

Wow -- I can't believe you have hummingbirds still in this cold! Ours are definitely migratory and we lose them typically before the first frost. Your Gingerbread Square block looks yummy! Your crayon tinting is pretty . . . . did you go back and re-color any of it after heat setting it? Happy New Year to you, your family and the fur babies!!! :)

The birds are loving our rose bushes, since they are close to the house I think they like the warmth and protection from the wind.

We'll watch the ball drop on TV while we wait for Drama Teen to come home from a church party with her friends. Have a very happy New Year.

Mmmm Cheesecake! I sure wish I lived closer to you!! We're watching TV and will probably stay up to watch the ball drop. It's not like we could get any sleep with all the fireworks. It sounds like we're in a war zone. We had a ham steak for dinner. It's not tradition for us, Bruce just thought it would be quick and we were in the grocery store anyway. Poor Smitty. My Kitties and I are sending you warm thoughts. It was in the 60's today, and we find that quite chilly. We're not as tough as you north western folks. I'm excited to see your interpretation of the quilt for the Book it challenge. Happy New Year!

My sister Judy has a hummingbird feeder too - I'll have to pass on the link to her. I'll stay up (by myself, they're already abed) until midnight to welcome in the New Year. I finally finished Judy & Walter's quilt top tonight!!! Hooray!!! Her neighbor across the street has already offered to quilt it on her longarm. Tomorrow I'll get the binding ready too - then either Judy can ask Faye to sew it on for her or show her how, or it will wait until I come up again. It's a Quilt in a Day Braid pattern, queen sized. I think it's about 100" X 108" or slightly smaller, 5 braids, framing strips, lattice strips and 4 borders. Yikes! After I get it all pressed tomorrow, maybe Walter can hold it up for me to take some pictures.
Cheesecakes sounds good! I made another batch of easy fudge today for us to have tomorrow. Not sure what we'll be eating as they are both working tomorrow. Plenty of good stuff in the freezer though, so we'll come up with something yummy!
Happy New Year to you & Mike, Gracie & Smitty too!