We're coming down to the wire with our preparations for our upcoming trip.  We leave next Saturday morning.  During the next week, I have a lot to do to get ready, especially today and tomorrow.

Erik and Mae are coming up tomorrow for dinner, mainly so we can get together before we go.  Mae is a bit of a question mark since she's scheduled for back surgery on Tuesday.  It's an overnight stay in the hospital, and I'm going to pick her up on Wednesday.  They're going to repair a disk that has been giving her no end of grief for the past six months, so I'm glad something will be done about it...for both their sakes.

I'm making some meals for them today and tomorrow so they'll have something to eat for the first few days while she recovers.  Erik is a good cook too but working full time.  I think they'll be glad for the already-prepped meals for a few days.  I wish I could do more, but our trip looms.  Erik and Mae have agreed to come up and pick some tomatoes while we're gone so that the vines will continue to produce after we get back.  Mike has a drip system hooked up now to keep them watered while we are gone, and it is working great.

I'm not taking my sewing machine on this trip since it's a bit of a hassle to set it up in the trailer, and because we probably won't be staying in any one place long enough to make it worth the effort.  Instead, I'm taking along all of my monthly embroidery blocks.  I'm a month behind now on the Promises & Borders quilt, but I may end up making the September block when it comes out tomorrow, which will give me four blocks to work on.  That ought to keep me busy.

This morning, I traced out the August block: 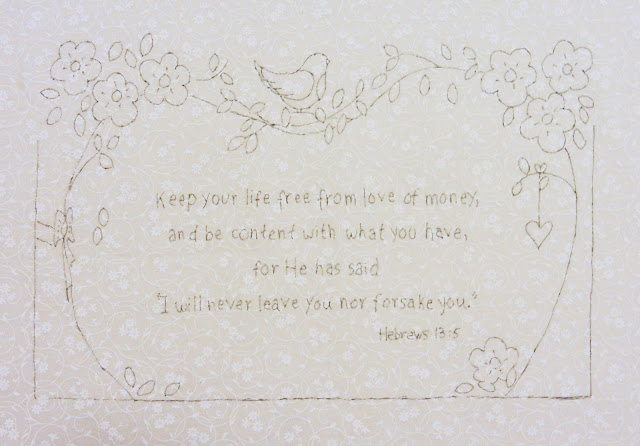 Also, I transferred the September block for the Vintage Miniature Sewing Machine BOM.  This one is "The Little Belle". 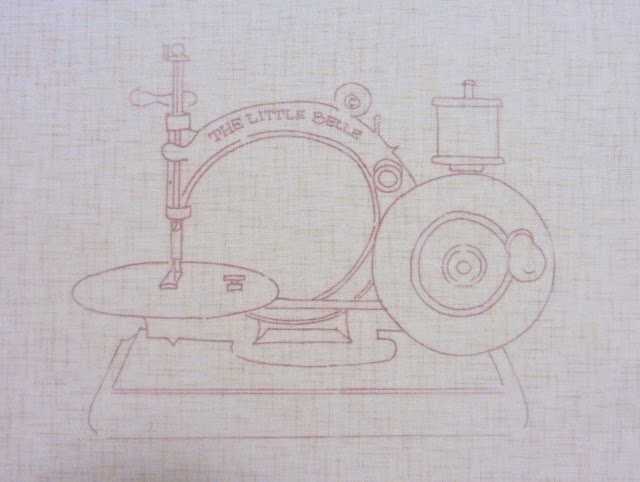 The information that came with the embroidery transfer says that this machine was manufactured by F.B. Taylor of the UK in 1874, but otherwise, not much is known of the factory or its maker.  It features a forward-facing drive wheel and is made of cast iron with classic gilding.  It also states:

The US based Singer/Howe and its cohorts formed the infamous patent cartel and held other makers to a $5 per machine license fee ransom.  To avoid payment many small firms produced pirate models or carried no name to make it difficult for detection by the cartel's lawyers.  Many sewing machines are labeled mysteries because of this.

This isn't the first time the information from the BOM has eluded to the competitive ruthlessness of the Singer/Howe company.  It makes me glad my sewing machine is a Bernina.  Here is a photograph of the actual machine:

Finally, I traced out the fourth block for the Love Me, Love My Cat quilt. 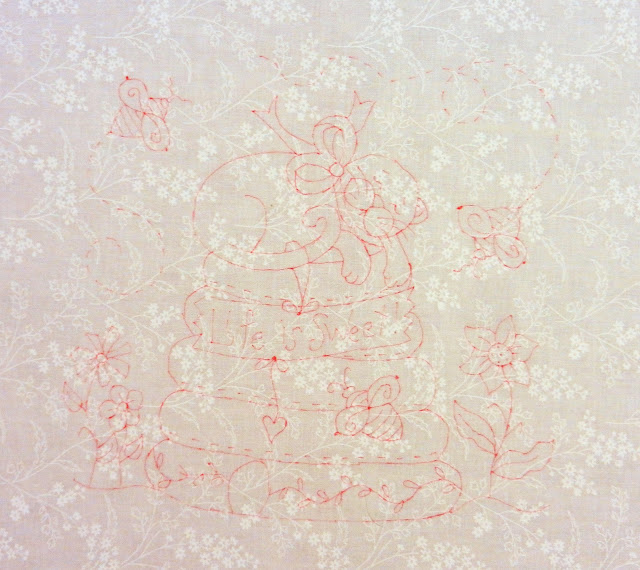 Those three blocks ought to be enough to keep me busy while we're traveling, but when embroidery is my only sewing source, it tends to go quickly.  I'm hoping I'll have enough time to make up the September block for Promises & Borders so there will be no chance I'll run out of things to do.  As if I would.

Oh yes.  I almost forgot.  I think it's safe to post this because I don't think my partner in the doll quilt swap reads my blog.  I'll be putting this quilt in the mail to her on Tuesday.  The theme for September was "Harvest Time", and this is what I came up with.  I adapted the design from a free pattern I found at TLC Home. It has raffia at the hands, feet and neck of the scarecrow. 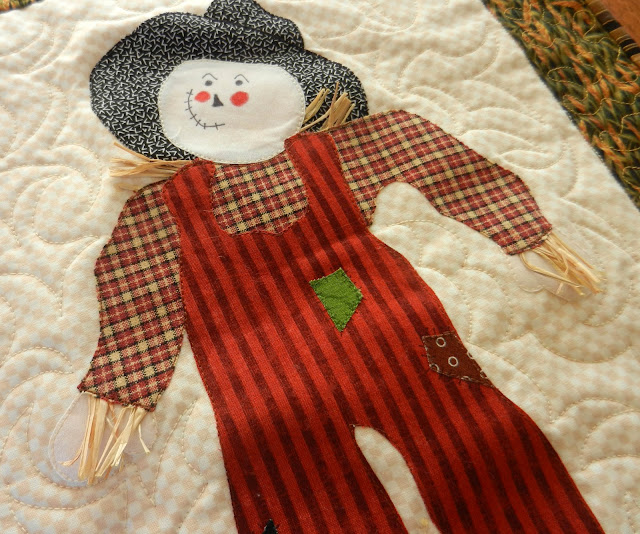 And I used the straight stitch on my sewing machine to embroider the markings on the pumpkins and leaves. 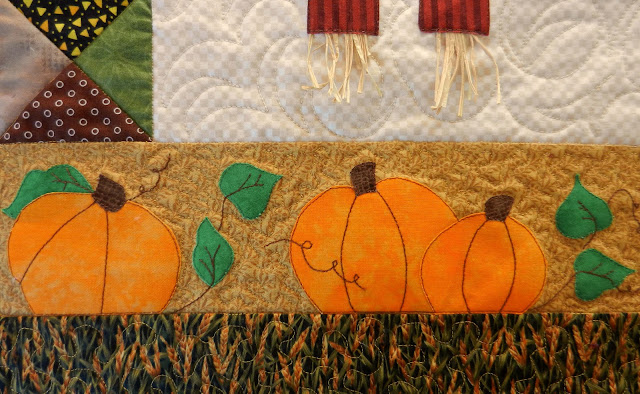 It is free motion quilted.  And while I'm at it, I have a question for you free motion quilters out there.  I was having trouble with "eyelashes" on the back of the quilt.  At first, I thought it was the thread I was using, so I switched thread, and the problem disappeared.  Then I ran out of bobbin thread, and when I rewound the bobbin, the problem came back.  I don't see how it could be the bobbin tension because I didn't adjust the tension after I rewound the bobbin.  It follows that if the tension was right the prior to winding the bobbin, then it should have been fine after.  Right?  Say so if I'm wrong.  So my next question then, has to do with how tightly the thread is wound onto the bobbin.  Is there some sort of adjustment for that?  Is the machine out of adjustment somehow?  Any ideas would be appreciated.

So once this post is up, I'm heading out to the grocery store, which I am loathe to do on a Labor Day weekend.  Hopefully, Sunday will not be so bad.  I only need about a dozen items, and that should be quick.  And with that, I'm off.
Posted by Barbara at 10:33 AM

I'm a beginner (using my grandmother's old machine from the late 70's/early 80's), and I've noticed the bobbin tension will "shift" when I switch from using a walking foot to a straight foot, or vice versa. Without me altering the tension whatsoever. It's maddening.

Oh, and the raffia is a nice detail touch! :)

I like small projects when I travel and stitchery is great since You can put it all in a box and not a lot to carry. Your scarecrow is wonderful and great quilting for the piece.

Love the scarecrow! Really great touches! I had a similar sewing problem this morning (yup, just this morning, LOL)and after exhausting EVERY "standard" fix, finally decided to slightly tighten the bobbin (because it was the ONLY thing I hadn't done-2 or 3 times, and I have never adjusted it before...) so I held my breath and did it. It fixed the problem...NO clue why. Same thread, working on the same piece, doing the same FMQ..There should be NO reason it had changed or needed to be changed, but changing it made everything work right. Go figure.

Oooooh very cute scarecrow. Love the raffia and the stitches on the pumpkins and leaves. Very nicely done.

The doll quilt is very cute. I got started on mine last night. You'll come back from your trip with either everything done or nothing done. Either way is okay as long as you have a good time.

Such a lot of fun things! I've really enjoyed the P&B stitchery...I'll be sad to see that one wind up next month (you did see that the new one is out already, right?). Your little sewing machine is cute, as is the "love me, love my cat" stitchery!! And your harvest themed doll swap is darling!! Thanks for sharing the pattern for that one -- I've already saved it and the instructions!!

For more history, you might be interested in Grace Rogers Cooper's book _The Invention of the Sewing Machine_.
It's available here:
http://www.gutenberg.org/ebooks/32677
in a variety of formats, including Kindle (although I had to download it to my computer and then transfer it to Kindle).
It recounts quite a bit of the maneuverings of various sewing machine inventors and manufacturers.
I don't use a Bernina--but I do love quiltmaking on my treadle powered machines!

I've had that happen, nothing changed except the bobbin, I have no answer for why, sorry. It's frustrating and I'll be interested if you get an answer.

i love your scarecrow - he is adorable with the raffia poking out!

All of your stitchery projects are looking so good, and just the right stuff to take along on your annual journey. And your scarecrow is adorable! Great Idea with the raffia. :^)