We left home right on time yesterday morning.  Our route took us through the beautiful Columbia River Gorge and across the Columbia River into Washington near the tri-cities area of Pasco, Kennewick, and Richland. 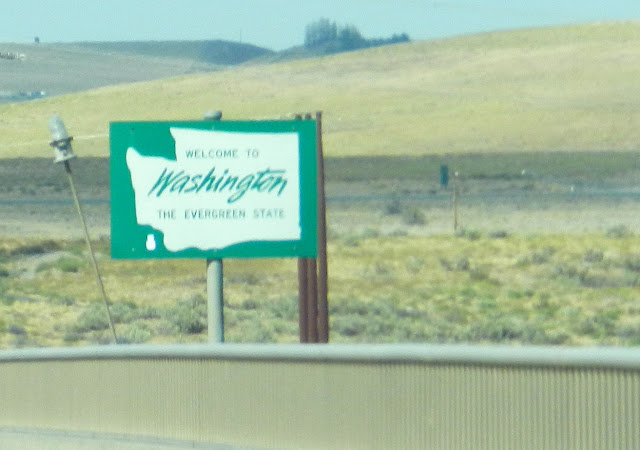 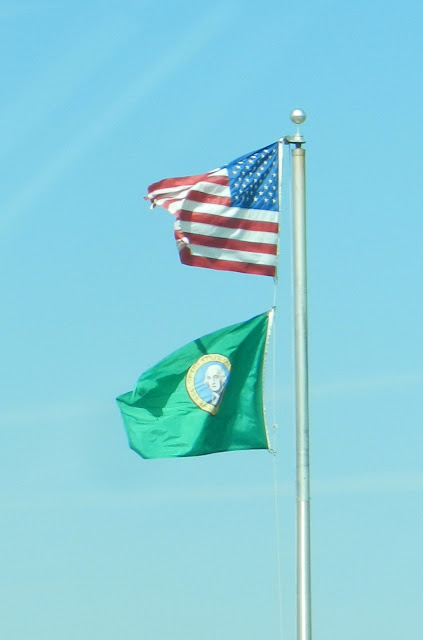 We drove a long day to Almota, Washington, which is in the heart of an area called The Palouse.  The Palouse was unknown to me until I started sifting through the piles of information I had about Washington.  It is the richest wheat-growing area in the United States.  While it does not have officially designated borders, it takes in roughly this area of the state(s).

The landscape is fascinating.  It consists of a vast area of endless undulating ripples in the terrain that were  formed when an ice dam burst during the ice age sending catastrophic flood waters over the area.

This is an image I took in Waldport, Oregon, some years ago that will give you some idea of the topography of the area.  If you've ever cooled your toes at the edge of the ocean, then you are familiar with this pattern that forms when the waves lap upon the sand: 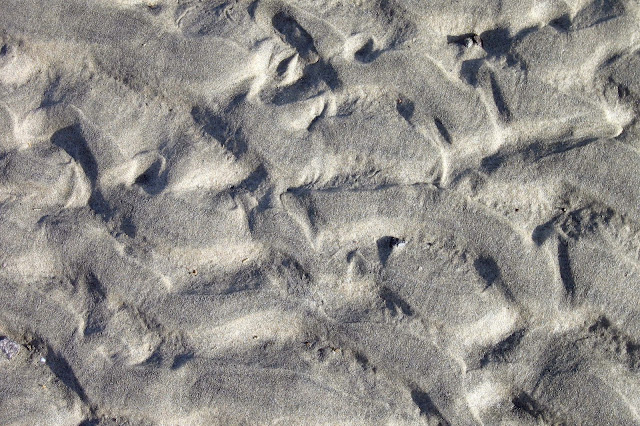 Now imagine the same formation on a landscape so vast that it can only be seen clearly from the air and you have The Palouse.  It was stunningly beautiful...unlike anything I have ever seen.  The wheat has, of course, been harvested, and so the following images will be in the color palate of tans, golds, browns, reds, and some greens. In the spring when the wheat is young, the landscape will look completely different.  For now, I'll just show you some of the pictures I took yesterday.

When we left Interstate 90 and headed east on State Route 26, it was relatively flat, but visually interesting because of the wheat stubble and tractor furrows left behind from the harvesting process. 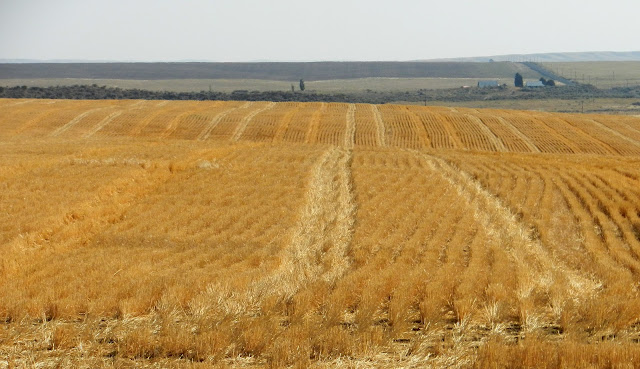 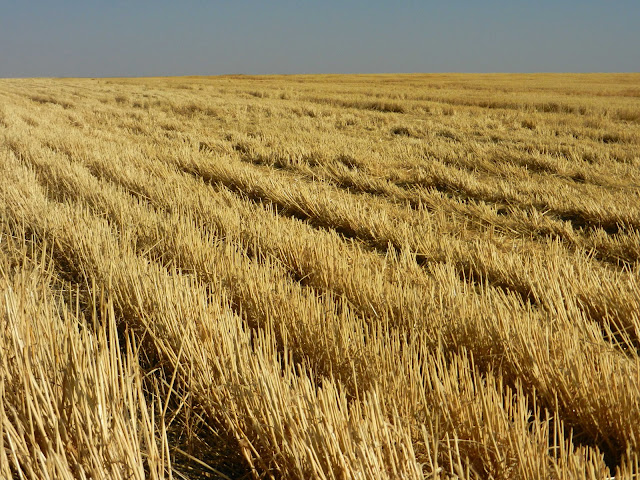 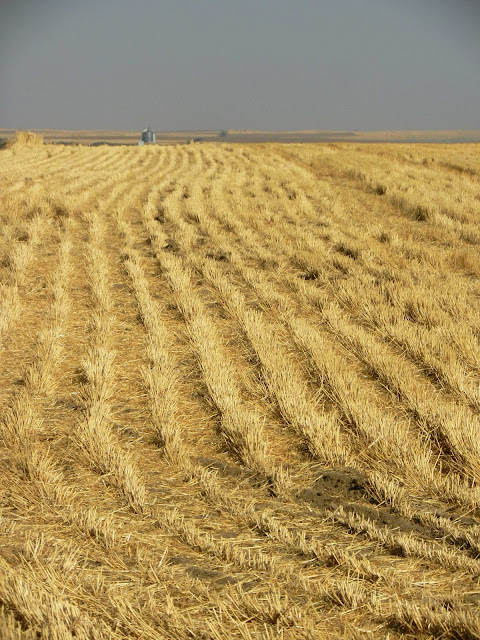 There were of course, farms, barns, and grain silos all along the way. 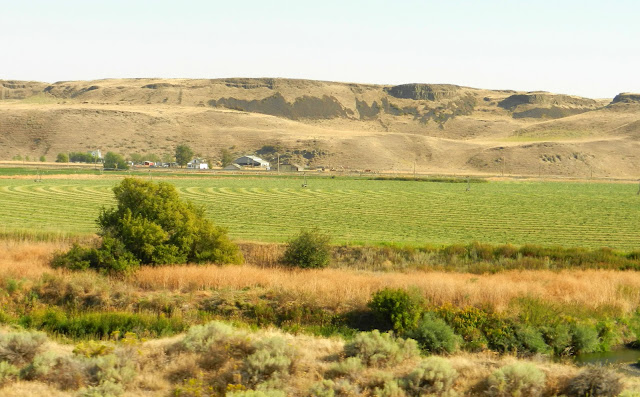 Eventually the coutours and color changes of the landscape became more obvious.  We were wowed by the beauty. 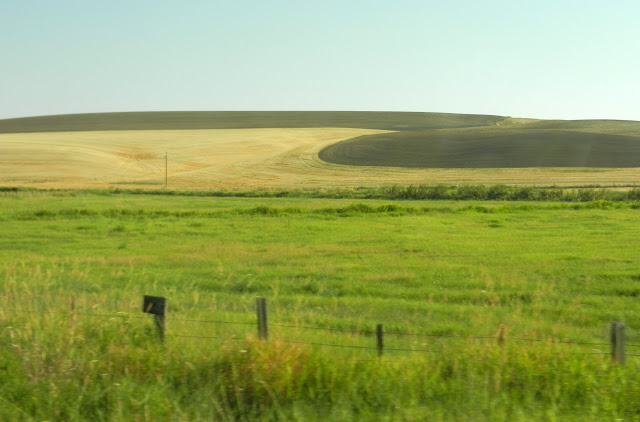 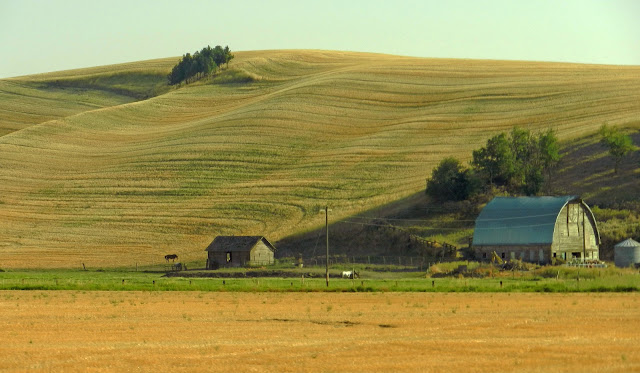 I was taking these pictures from a moving car, and so they are not as sharp as they might be had I been standing still.  I think you can get the idea.  The farther east we drove, the deeper the ripples in the landscape became. 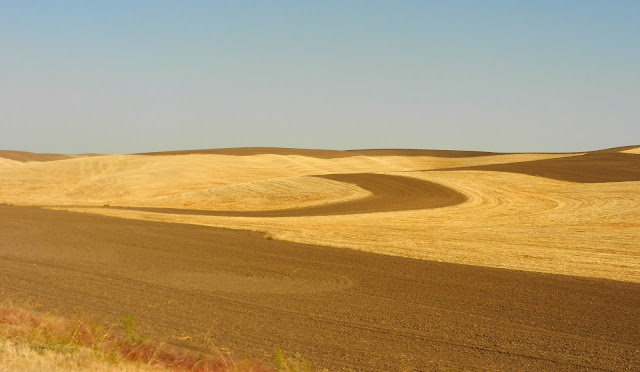 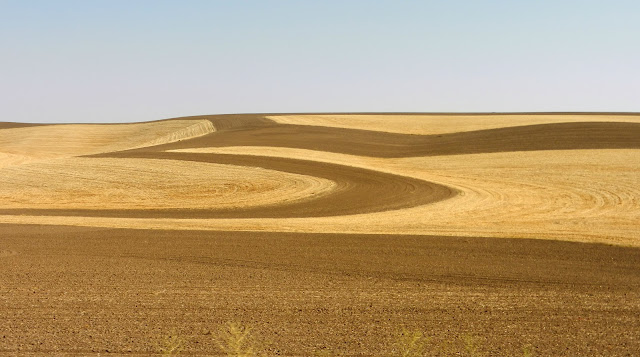 There were tractors everywhere, some attached to combines, and many had caterpillar treads to make it possible for them to negotiate the hillsides. 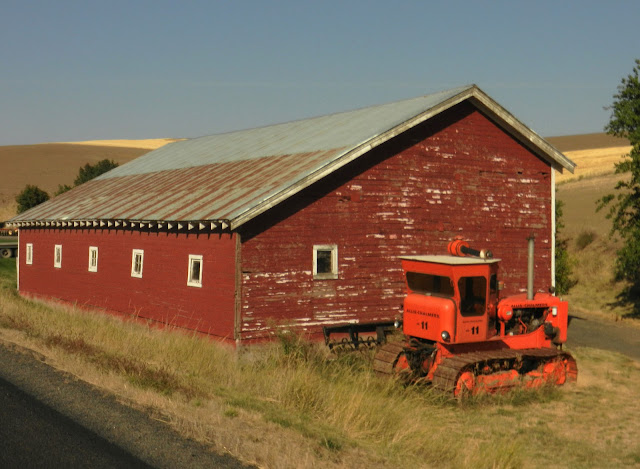 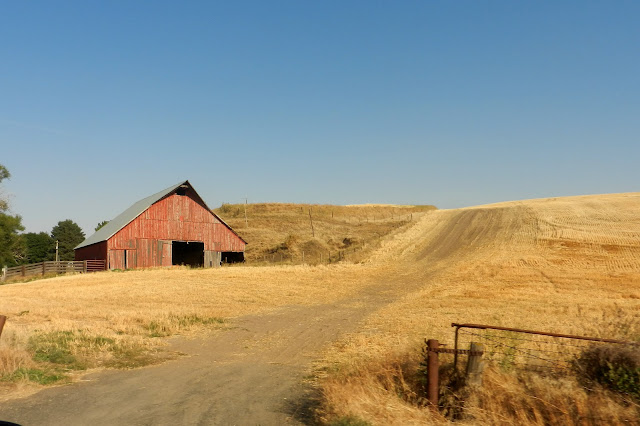 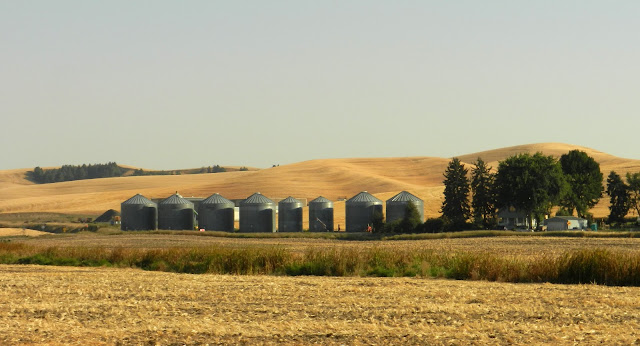 My pictures cannot do justice to the vastness of the landscape. 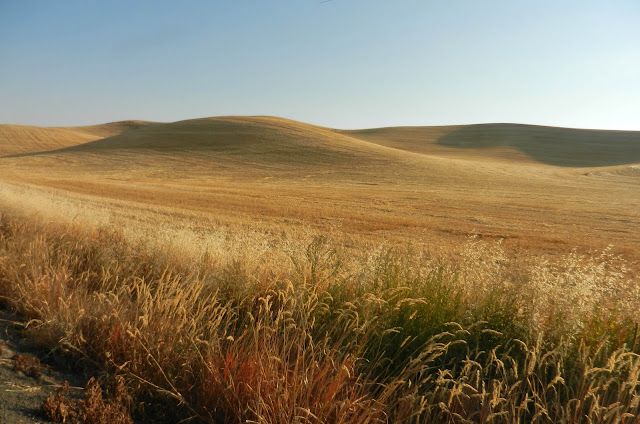 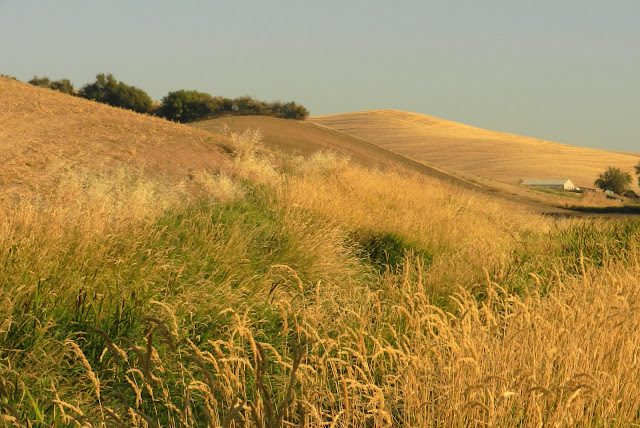 When we reached the town of Colfax, we endeavored to find the one RV park in the area, which was 18 miles south of where we expected it to be.  It is a beautiful marina formed on the Snake River by the Lower Granite Dam.  If you look almost dead center at the green area of the image below, then you'll know where we stayed. 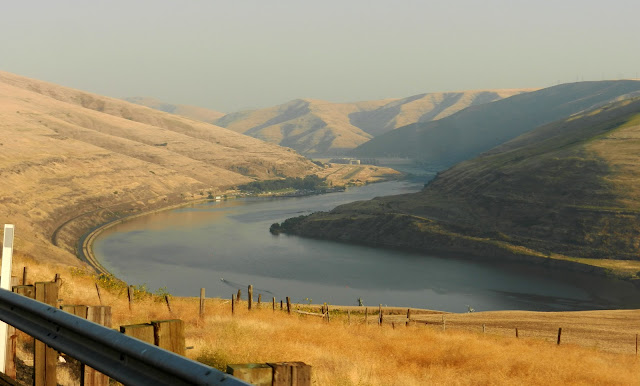 It was quite warm, and a hot wind was blowing.  Once the sun went down, it was a lovely evening, and we spent hours just sitting outside enjoying it.  Smitty nearly broke his nose trying to get into the Catio while Mike was hanging it from the side of the trailer. 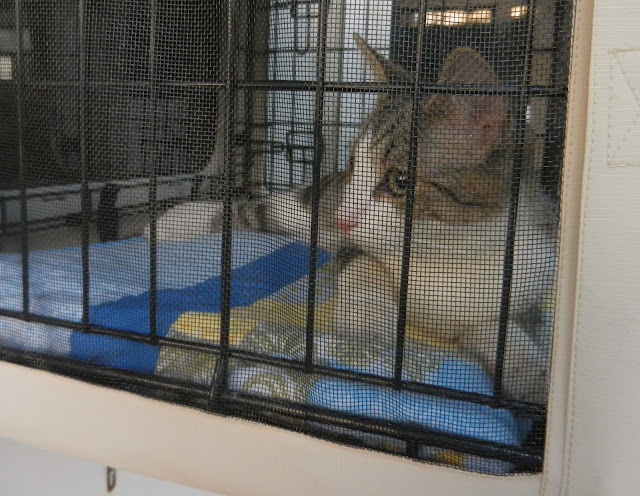 Two of our fellow campers approached him to talk, and he was utterly unafraid of them.

We were rump spring from our long day sitting, and so we took a walk around the marina as the sun set. 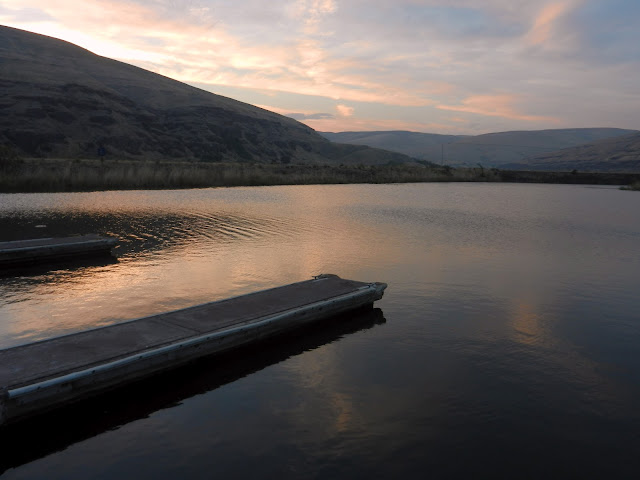 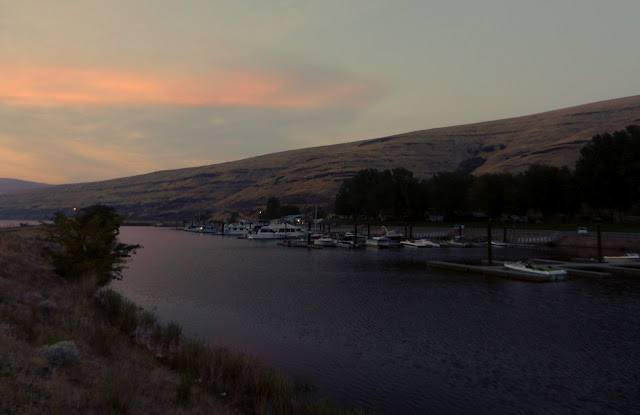 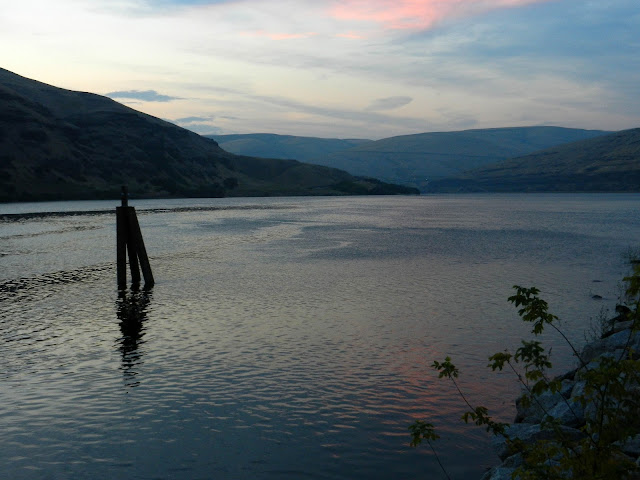 We will be heading out in a few hours.  Originally, we planned to reach Glacier National Park today, but then decided to make today a shorter day.  That means our goal is to reach Coeur d'Alene, Idaho, and stay there this evening, and continue onto Glacier the next day. We need to get a few groceries before we head off into the middle of nowhere and groceries become more scarce.  Before reaching Coeur d'Alene, however, we plan to visit Steptoe Butte State Park where we will be able to get above The Palouse and get a better view of the rippling landscape.

So far, no problems.  We are hopeful this trip will bring us fewer mechanical problems than our last trip did.  Those of you who followed along a couple of years ago may remember the problems we had with tread separations of our tires and failing trailer jacks.  Shudder.  Knock on wood.  And now my fingers are crossed too.
Posted by Barbara at 9:05 AM

Not to be obnoxious, but I really hope you have a great internet connection the entire time, *I* am enjoying *OUR* vacation :-)These pictures are just amazing and I love the very useFUL facts about them!I wonder if you will run across any barns with quilts :-) Safe travels!

So far, so fun! Even the 'rolling' photos are lovely - what's a bit of blur between friends?
Travel safe & give Gracie & Smitty some pets from me.

I love that sixth picture with the blue-green roofed barn in front. So lovely!

I've been through the Palouse coming back from Lewiston/Clarkston where we stayed at Hell's Gate state park--one of my favorite campgrounds! The road between Wallowa and there was an adventure we'll never forget.

I love that sixth picture with the blue-green roofed barn in front. So lovely!

I've been through the Palouse coming back from Lewiston/Clarkston where we stayed at Hell's Gate state park--one of my favorite campgrounds! The road between Wallowa and there was an adventure we'll never forget.

So pretty! I would never have associated wheat with that area! More like Kansas.

I'm so happy you're traveling again. I enjoy the travelogue and pictures. Awaiting the next installment.

It never ceases to amaze and wow me, the incredible and diverse landscapes that make up this great country. What beautiful scenery you've had so far! Don't forget to toss us a pic or two of the rig, though!! LOL! :)

This is beautiful country Barbara. Wonderful shots! Have a great vacation!

Beautiful pictures! Thanks for sharing.

Ahhhh! The Palouse is one of my favorite areas and not just because my daughter, son-in-law and grandkids live in Colfax! I love driving through in all the different seasons, marveling in the variety of colors! I have plans to make a quilt or a series of quilts of the area. I have made a couple of wall hangings including one for my daughter's graduation last May with her Master's in Plant Science from the University of Idaho.

What beautiful photos and landscape, really great for future art pieces. The place you stayed is wonderful, I love being on the water, salt or fresh.

Your photos are lovely, as usual....the scenery is breathtaking. I never have seen that area in real life, and not much in pictures, so this is great fun. Thank you so much for sharing your trip with us!

Beautiful scenery. Thanks for sharing your photos, they are all gorgeous. Glad that Smitty is enjoying the adventure.

We're sorry, but there is not a web page matching your entry. Just FYI .