A Mystery, A Funny, and an Update

Thursday I started on a project that will be a gift for someone who reads my blog.  It won't be available for viewing for at least a couple of months, but I'm going to tantalize you with it nonetheless.  It's a small applique project . . . I'll tell you that much.  It was something I saw on the internet and was instantly consumed with the desire to make it for its intended recipient because it was so perfect for her.  Have you ever seen a pattern and been struck dumb with inspiration?  (This assumes that you were actually smart to begin with.  I'm hardly ever struck "dumb" simply because I'm so close to that state in general.  Actually, I think the expression "being struck dumb" refers to the other kind of "dumb" as in . . . not speaking . . . and that is almost never my problem.)

Ahem.  There I go being tangential again.  So my project.  Yes.  Here's a sneak peek just so you don't have to read very far without seeing any pictures. 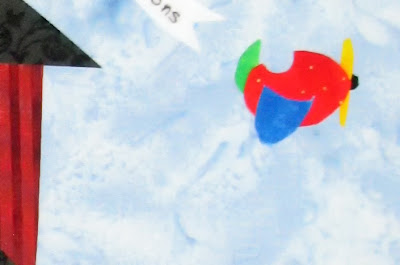 The instructions for the pattern were a little confusing.  I read them over several times before I was reasonably sure I had it right.  I'm still not sure, but I've done enough applique to be able to wing it in the parts I'm not sure about. 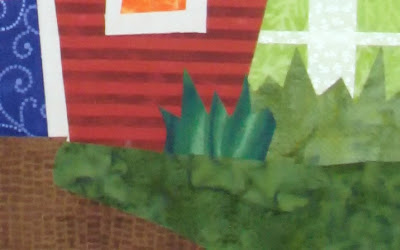 So I managed to get all of the applique done, and now I'm ready to top-stitch it.  Ordinarily, I use a blanket stitch, but again, the pattern goes into quite a bit of detail, including the stitch length and width settings for a close zigzag stitch . . . almost a satin stitch, but not quite.  I'm going to give the zigzag a try, but I might decide to switch to blanket stitch if I don't like the looks of it.  Some of the pieces are very tiny, like the little airplane I showed you above.  The whole airplane is only about the size of my thumb, and so you can get an idea how tiny those little propeller pieces are.  One last peek, and that's all I'm going to give you. 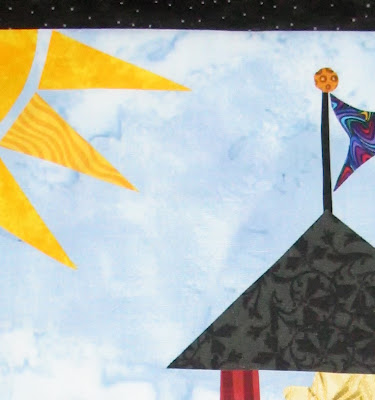 (at least, I think it's funny) 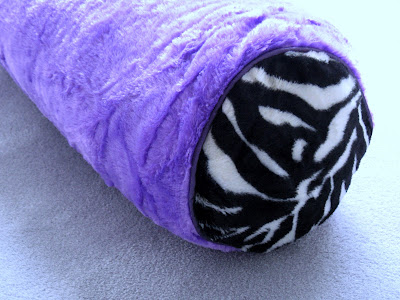 I'll start by showing you this picture of a bolster I purchased at my local Fred Meyer store yesterday.  Fred Meyer is a chain of stores that we have in Oregon and Washington, and maybe even northern California now.  The Fred Meyer chain was started by a man named . . . anyone want to guess?

(Waiting here while you put on your thinking caps.)

The Fred Meyer chain is known affectionately in Fred Meyer Land as "Freddy's".  Mr. Meyer died quite some time ago, and the chain of stores was purchased by Kroger.  They're still known as Fred Meyer, however.  Even Kroger knows not to mess with a regional staple.  The Fred Meyer stores are the stores that would be born of a union between JC Penney, Home Depot, and your favorite supermarket chain.  They tout themselves as a one-stop shopping center.  (It's not entirely true because you have to go to different registers, and therefore stand in more lines, but that's beside the point.  In fact, this whole thing is beside the point.)  Okay, I'm getting to the funny now.

So yesterday I woke up with a pretty serious backache (that's not the funny part).  I have degenerative disk disease in my spine, and so I'm always having to baby my neck and back if I want to be able to move around freely.  One of the ways I do that is to sleep with a pillow between my knees . . . or if I'm on my back, then I put the pillow under my knees.  You might guess that the pillow can get pretty flat after years of  use, and it was definitely time to purchase a new pillow.

But then I got this brilliant idea (see the first paragraph above) to get a bolster instead of a pillow, reasoning that a bolster will last longer.  So I leave the bedding section of Freddy's and go to the "throw pillow" section and I find the stylish bolster you see pictured above.  Honestly, it looks just like that except that the actual pillow is such a bright shade of purple that it will undoubtedly glow under a black light.  It's positively pornographic.  They had them in hot pink too!  No other colors.  Passionate purple and hot pink.  Take your pick.  Not only that, but I could buy one and get the second at half off.  (I almost burst out laughing at the idea of someone wanting not one, but two of these lovely items.)

Not to worry, I reason.  It's for when I go to bed at night, and so I'll be putting it in a pillow case.  Despite its being so loud in color, I decide that if it's imprisoned in a pillow case, it probably won't keep me awake at night.  But here's the problem:  I still needed to buy groceries in the supermarket section of Freddy's, which meant that I had to walk through the store with the bolster in my cart.

I found myself trying to avoid pushing the cart much, instead, leaving it in a central location and delivering my groceries to it surreptitiously.  I really didn't want to admit that I'd actually voluntarily chosen said bolster for my very own.  Still, I managed to get through the grocery store and get all the things I needed.  I only saw about half a dozen people pointing and laughing at me.

Okay, now I'm getting to the funny part.  So I get up to the checker and she says to me (I swear I am not making this up), "Oh!  Do they have these in red?" referring to the purple bolster.  "My daughter wants to do her bedroom in zebra, and I'm thinking some red pillows would be nice, but my husband says, 'absolutely not!'"  She seemed disappointed when I told her that they only had purple and hot pink.

That gives me an idea though.  I'm thinking of redoing my bedroom in zebra.  I wonder if Mike will go along with it.

Okay, I know you're just dying to know how the sourdough starter is going, because honestly, there's an awful lot of excitement around here what with purple zebra bolsters and man-eating sourdough starters.

Here's how it looked this morning when I cautiously approached  checked on it. 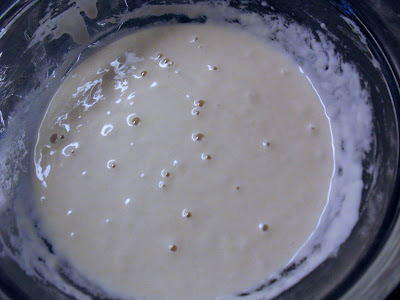 This is day five, and so tomorrow it will be ready to use.  You can see how active it is now.  I went through my routine of pouring off all but four ounces of it and then feeding it again.  Within an hour it was already bubbling again.

My understanding of these starters is that they grab wild yeast out of thin air.  The yeast being wild would explain it's propensity to eat Milwaukee if not managed properly.  (You'll have to read my original post if you want to know what I mean by that.)  You start with a whole grain flour, such as wheat or rye, because it has more nutrients than all-purpose flour.  Then you continue to add more all-purpose flour and water until you've developed enough yeast for a rise in the sourdough loaf.  It's a little like a chemistry experiment.  And let me tell you, it has that lovely tangy aroma of sourdough when I remove the plastic from the bowl.

Tomorrow is the day.  I'm going to bake my first loaf of sourdough bread.  Wish me luck.

LOL! You are so funny!

Your applique project is going to be darling! I can't answer your question because I am completely new to applique. Well, I COULD answer it, but it would most certainly be wrong. :) What did you husband think of your new bolster? Maybe you are secretly harboring a wild side! LOL. And as for your sourdough...what time should I be there to sample your bread?

If you do a zebra bedroom, I'd add red instead of purple. You could just recover that bolster. On the applique, do it YOUR way. I change patterns all the time, to fit me. I like the blanket stitch much better than the zig zag. Either way, have fun with it. Oh yea, another blogger posted about stitching with batting in place, then trimming it off around the stitching, making it 'poofy' around the applique. Not sure if you'd want that much pouf or not.

Pillowcases hide all manners of insult in the pillow department. I like fuzzy ones-not fur, but I guess it's flannel and that is my fave one to sleep with my face on. This sourdough sounds a lot like the Friendship Recipe that was being shared about in gallon Ziplocs a few years ago. My husband made several loaves before the urge to ingest sourdough was satisfied.

Best of luck with your baking endeavor...

Hey Barbara, love that little applique. And, being the novice I am, I can only offer what I've experienced - but, lucky for you (and everyone else who was wondering), I've done applique both ways. And Cheryl is absolutely correct. If you stitch just the fabrics, no batting, you get ZERO puff and the applique could look a little flat, unless then you also do like echo quilting around it and use contrasting thread.

If you edge-stitch with your batting in place, but not your backing, you get some puffiness, and you hide your stitching, so that when you do your quilting, your motif is repeated in "non-stitching" on the back.

And, if you do your edge-stitching with you batting and backing in place, you get a hot mess on the back. Bet you could guess how I know that!

Fred Meyers sounds like our HEB Plus, also named after its founder, Mr. H E Butts. LOVE those stores! And they have the same purple or pink pillows!!

Your pix are beautiful - thanks for sharing the 3 mountains! Lovely view!!

I was going to say basically the same as kc - if you stitch with the batting the shapes will pop more - so it depends on the look you are after. You might want to do most of it without the batting and then choose a couple of items to POP - like that adorable plane.
Can't wait to see the finished product.
As for the bolster, I can't believe that you didn't buy more than one, after all the shape looks good, they could be recovered and once they are under the sheets who is going to see the OMG colour!!

Good morning! I saw KC mention HEB stores, she must be Texas! Me hhhmmm, if I had a store it would be cool to hear everyone say, "yep! Got it at Beth's!" but thank goodness my last name is not Butt-----put the two together, that's funny!
And I've made sourdough starter many times.... The part you pull off you give to a friend so they can have a start. Makes wonderful. Akers, pancakes, coffee cakes. My inlaws were German and we called it "Hermann"....not sure why, think I'll look it up!
Beth in Dallas

I agree with the others, the batting adds the puff, but I would probably use muslin or something thin then put the backing over it. I just have a feeling that the batting may snag. Next time you're buying something like that, walk proud, yes you have horrible decorating taste, but YOU can carry it off.

If I had been at Freddie's with you, I would have put your bolster in my cart, just so you wouldn't be self-conscious! I think it's FUN!!!
I am jealous of the unnnamed blog reader who will be getting that little airplane....
MMmmmmmm...fresh sourdough bread....