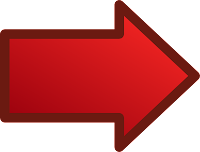 Looking For My Giveaway Posts? Check My Right Sidebar 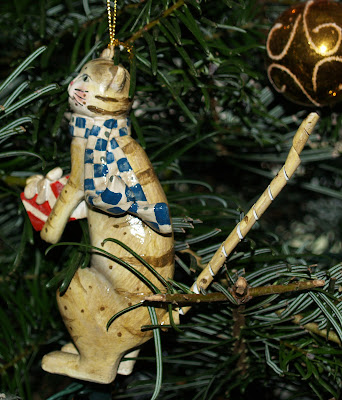 The nativity and the tree are up.  Whenever I unpack the nativity and the Christmas ornaments, I reflect on Christmases past and remember those who are special to me and those who are no longer with us.  Our Christmas tree is a hodge podge of unrelated ornaments.  Unrelated, except that each one has special significance.  They often have me thinking of things I haven't thought of in years.  It's one of the best things about Christmas, in my humble opinion.  I wanted to take you through some of my favorites and tell you about them.
Of course, there are lots of cats on our tree.  This one is little Krissy, who is no longer with us.  She still has a place on the tree, however.  She was such a character, and we had her 19 years, so we still talk of her and miss the special parts of her personality.﻿ 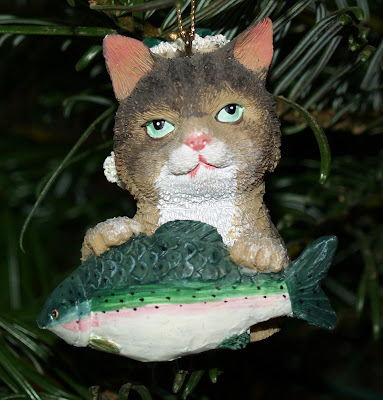 Then, of course, there's the George ornament,

and the Gracie ornament.  Gracie is such a scaredy cat that this ornament is perfect for her.  She's fat already, but she walks around puffed up in terror half the time--you know--when scary things happen.  Like when I run the vacuum or the dishwasher, or open the refrigerator door, or walk on the floor.  Terrifying stuff like that. 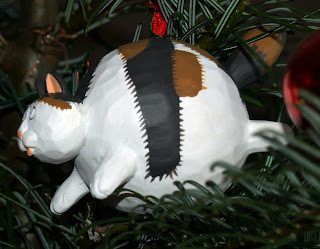 And there's this one.  When I was a working person, I was a licensed clinical social worker in private practice.  One of the things I did was to supervise other social workers as they worked toward their own licensure.  One of them gave me this ornament: 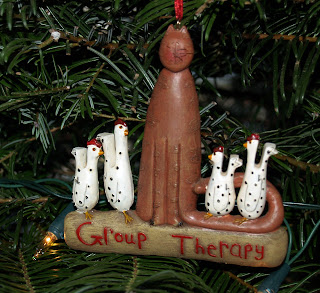 I just love the chickens.

Then there are the kid ornaments.  This is one Erik made when he was in kindergarten: 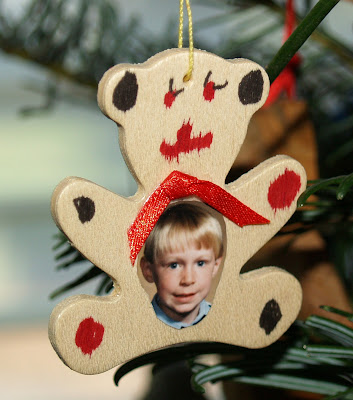 And this one that Matthew made in daycare: 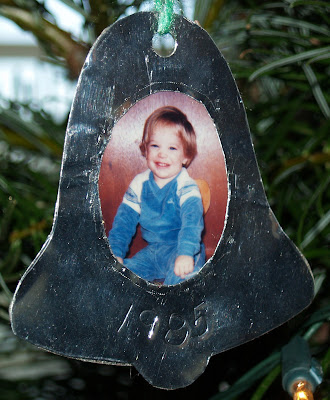 Matthew made this one in first grade: 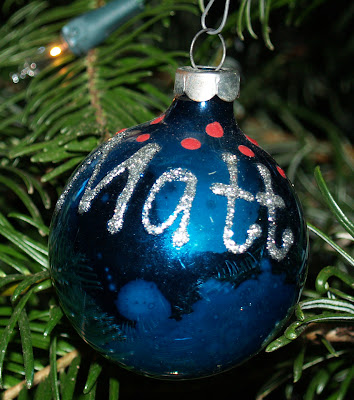 And Erik made this one in cub scouts: 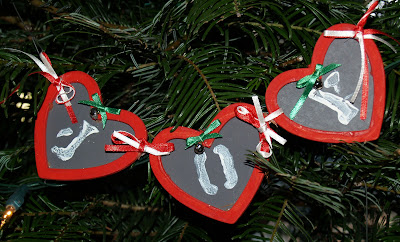 This is one I bought for Erik to remember when we attended the Nutcracker together when he was five.  When you pull on its string, its legs and arms fly up.

Matthew was too young to attend the Nutcracker with us, and so I bought this one for him the same year. 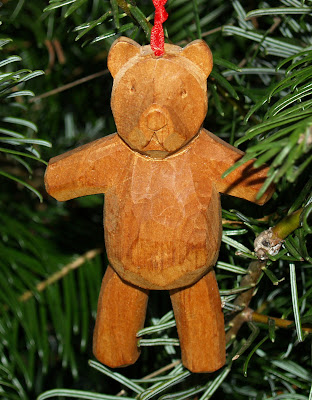 Our tree topper was a gift from Erik when he was a teenager.  I've always loved it.  I'm thankful we've managed to keep it intact all these years.  Tree toppers can tend on the gaudy side . . . or they can be too heavy for the tree.  This one is perfect.  We call it "the fat Santa". 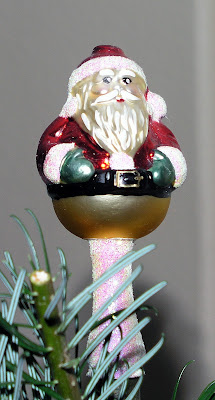 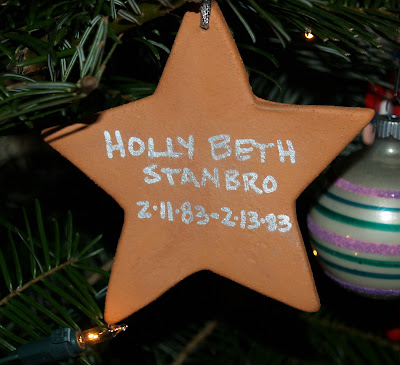 This is a terra cotta star, and it has special significance.  It is a "Brown Star."  A group of grieving mothers of infant losses and I got together and started a support group called Brief Encounters.  One of our members read something in the paper as our group was forming, and she wrote a story that led to our adoption of the brown star as our representative icon.  Here is the story, written by Kim Steffgen, whose son Teddy died shortly after birth.

Not long ago, astronauts found in the heavens gaseous celestial bodies--clouds of cosmic dust--which they think have finally answered the mystery of what exists between the small things in the universe, like planets, and the bigger things, like the sun.  They call this cosmic dust, "brown dwarfs," or "prestars," because, although brown dwarfs have all the same elements to become stars, for some reason they never did.
All stars go on to live full lives, from their hot, bright white dwarf stage, to their aged, cooler, and dimmer red giant stage.  But "brown stars" only go so far.  Instead of being born to live a normal star's life, they remain cool and dim, hiding in the heavens, sprinkled in clusters among the other stars, 150 light years from Earth.
But like our babies, their roles in the universe are very important.  In fact, scientists believe they serve as a link between the small things and the big things, holding the universe together; a mid point between the beginning and the ending of our universal story.
As we grieve our babies who died before reaching the stardom of their earthly lives, perhaps we can find comfort in the possibility that they were designated for this very special, universal role.  Energized by our love, they are guardians of our memories of what was, and our dreams of what some day may be.
As we look to the heavens, seeking answers, we send messages of love to our "brown star" babies.

We made these ornaments as a fundraiser the first year we were in existence.  In a subsequent year, we made these tissue paper ornaments, and this one hangs on our tree for Holly as well. 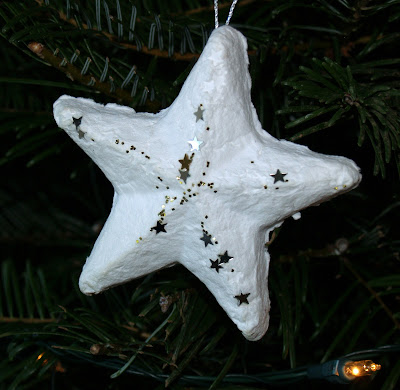 Then there are the ornaments that make me think of my dear mother.

The Christmas before Mike and I married, my mother and I went around to the after-Christmas sales and picked up some Christmas ornaments for what would be Mike's and my first Christmas tree after our marriage.  These sets of bells were among them.  They were in sets of six . . . the gold set and then the glitter set that included several colors.  We still have all of them these many years later, and I always think of her when we hang them.  Those were happy days. 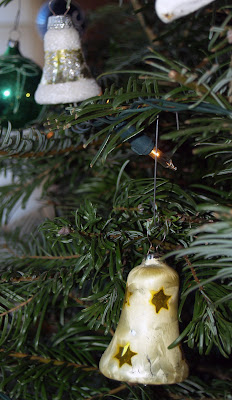 Then there's this ornament which must be centuries old, at least.  It's older than I am in any case.  (Not really centuries . . . but since I'm always claiming to be a relic of the 14th Century, I thought I'd stick with the theme.) 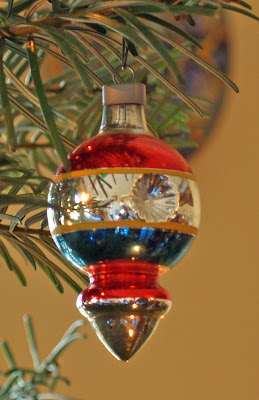 I can remember wanting to hang this ornament on our tree when I was a little girl.  My mom always hated it, for no other reason than that it was old.  I loved it for its unique shape.  At the first opportunity, she gave it to us.  I was thrilled to get it.  My mother was thrilled to get rid of it!  It ended up in a loving home, so all is well.

I have many more ornaments, but those are the most special to me.  The other thing I want to tell you about is the nativity set my grandmother made for me.  But this post is long enough and so I'll save that for later in the week.  Til then . . . I hope all of your holiday plans are coming together.  Don't forget to spend some time just enjoying the season.
Posted by Barbara at 1:02 PM

I especially like the "fat cat" ornament. Thanks for sharing.

I loved your long and loving post. Funny how these precious bits of memories are only to come out and be treasured just once a year. Maybe that's what holds the so special? Just lovely - I need the tissues, please.

I love the group therapy ornament. I hate not being able to put mine up, love looking at them and they make me smile, but I won't be smiling if they get knocked down and broken.

We share a commonality in our tree decorations: that of those special ornaments that have special meanings and/or memories behind them. While I have many ordinary boxed sets in a wide variety decorating my tree, there are many, many odds and ends that only I know the true, and heartfelt, meanings behind. Someday they'll go to my children, but they won't mean as much and many likely won't even be kept. Thank you for sharing your 'specialties' :)

Wonderful, wonderful post! Our Christmas tree holds special memories -- some really old ornaments, the tree top angel that my Mom made us out of muslin and handpainted, and even our Fred ornament, which is a beautiful head of an orange tabby cat (also painted by my Mom) who was our special cat who lived to be 19. Even the collection as a whole speaks to us, as my Dad collected ornaments his whole life, and just before his death (which was not expected) divided all of them into boxes with each of his children's names, to continue to be enjoyed. Geeezzz, we are lucky to have so many memories associated with our Christmas trees! Thanks again for this post - really touched me!

What sweet memories your tree holds!! I'm particularly taken with your precious brown star. My daughter had to find an ornament for her tree this year for her first son, Everett, who was stillborn this year. She found a beautiful one, too. http://jocelynmerkel.blogspot.com/2011/12/remembrance-ornament.html

Thanks for sharing, Barbara! :)

We are super cat lovers here too, so I loved seeing all of your cat ornaments!

The story of the brief encounters.. very touching.. wow. Thanks for sharing that. I cannot imagine how that much feel, what mother go through in situations like that.

Lovely post and a great reminder about what matters in this life: PEOPLE. Christmas past memories and Christmas future, opportunities to make a difference in someone's life..to bless and be blessed. Looking forward to reading about that special nativity.

I lovedthat "Group Therapy" ornament! I have a lot of cat ornaments on my tree, too. Last year, a flickr friend from Sweden sent me some straw goat ornaments for my tree.

The ornament for Holly was very touching. As I was looking at it, I realized she was born a day before my son Jonathan, who was born 2-12-83 in a blizzard.

What a lovely and sweet post. I giggled about Gracie's terrors, and cried about your loss of your precious daughter. Thank you for sharing all of the wonderful memories that you told about.
Our tree has many handmades, too, lovingly crafted by little fingers. I would not trade them for any fancy decorations!

I'm right there with Snoodles, Gracie made me smile and I cried for you and Holly. There are lots of memories on that tree and it's beautiful.

As the daughter and sister of two Hallmark employees, ornaments are something I have in abundance, but some are just more special than others. Love all your special picks.