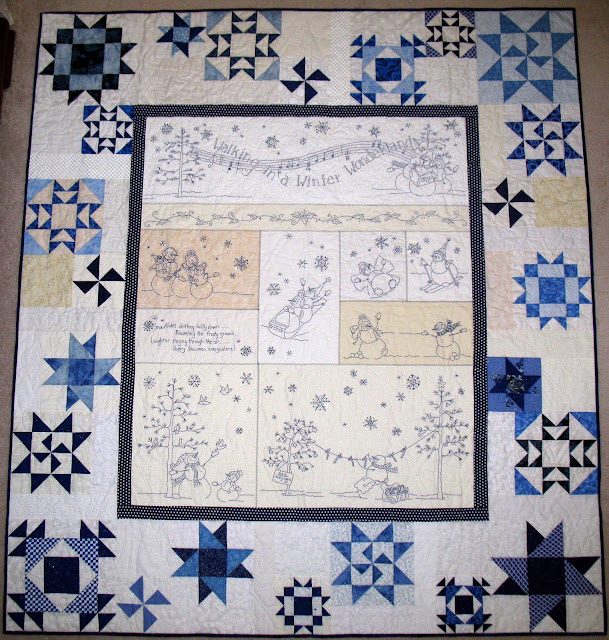 This is a quilt I'm most proud to have finished.  I first saw it made up in a quilt shop, and I fell in love with it.  It was all done in red and white.  It was so tempting, and I really wanted to make it, but all that embroidery!  In my heart of hearts, I was sure it would sit for years, without ever being started.  Even if I started it, I was sure that it would never be finished.  Later, I saw it again in the same quilt shop and mentioned to the owner how much I loved the quilt.  She said she had seen it made up in blue and that it was beautiful.  Thinking of it in blue really tempted me, but I continued to resist.  Finally, I saw it made up again in yet another quilt shop and by then, resistance was futile.  I purchased the pattern and took it home.

After that, I gathered up all the fabric, floss, muslin, and other supplies I would need and set out to work on the first stitchery  . . . the snow family. 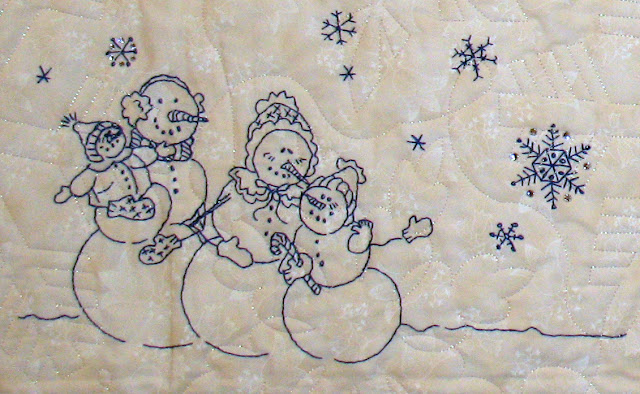 I was going great guns on it for a few weeks, and then put it down and didn't work on it again for months.  This was just what I had been afraid would happen.  But then I got involved in a UFO Challenge.  I committed to making one stitchery and two star blocks per month with the goal of finishing it in one year.  Once I got started, I stitched and stitched and stitched.

Lo and behold, I discovered I actually enjoyed starting my day with some hand-stitching.  After that, it was simply a race to the finish.  All the stitcheries and stars were finished in September.  It was assembled by mid-October and off to the quilter.  The quilting was finished by November, and by mid-November, it was bound and embellished with hot fix crystals.  It's a project to be proud of, if for no other reason than the fact that I persevered and finished it!

My talented quilter, Tammi, quilted snowflakes all over it using a sparkly thread.  She did such a beautiful job . . . exactly what I wanted. 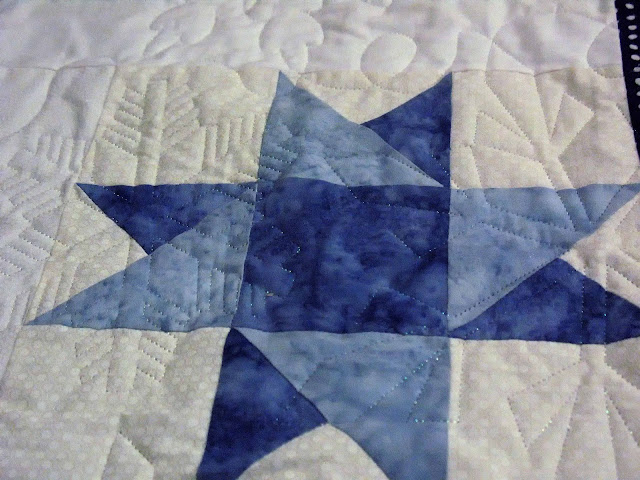 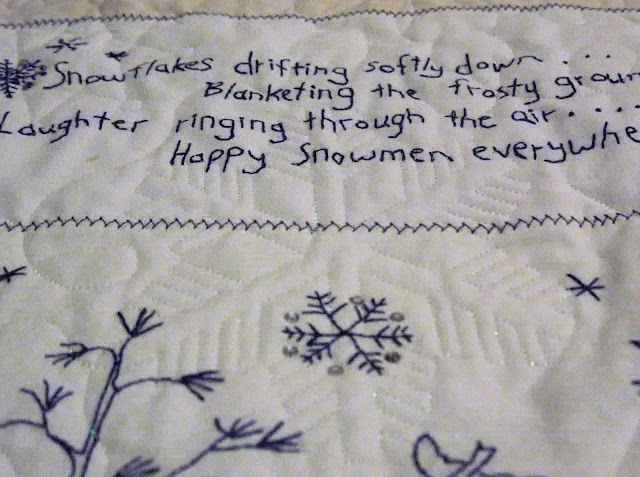 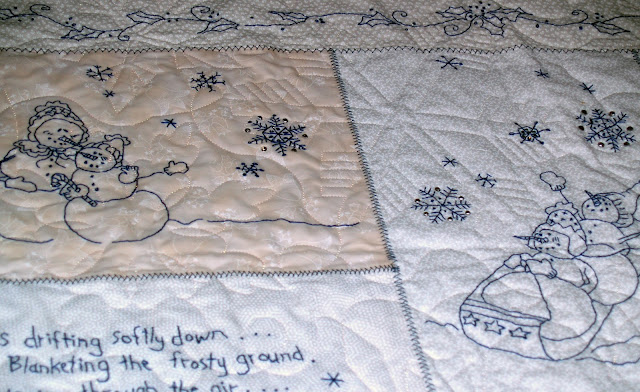 While they don't photograph well, I added hot fix crystals to the larger snowflakes, a few of the stars, and a couple of other places.  I wanted a little glitz, but I didn't want it to be gaudy. 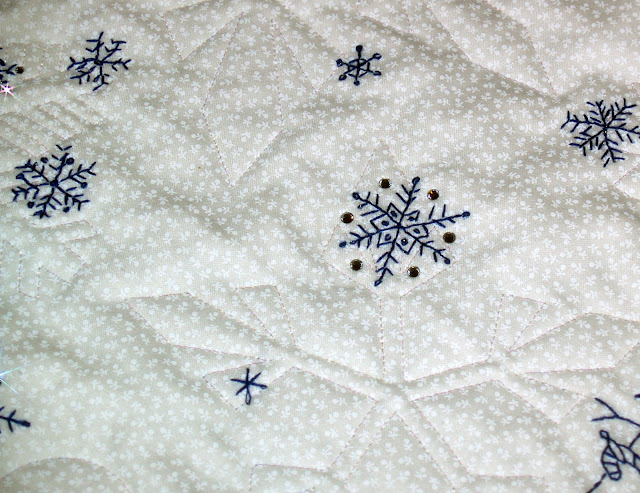 Here are the rest of the stitcheries close-up.

Walking in a Winter Wonderland 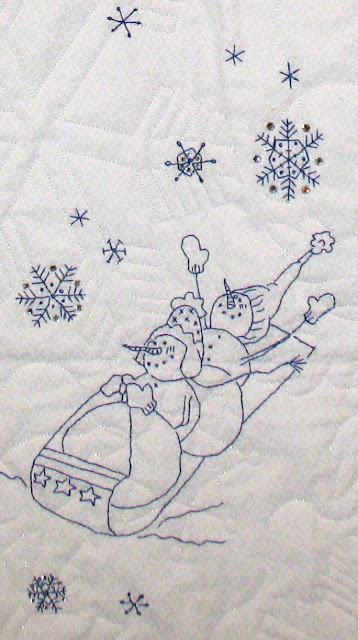 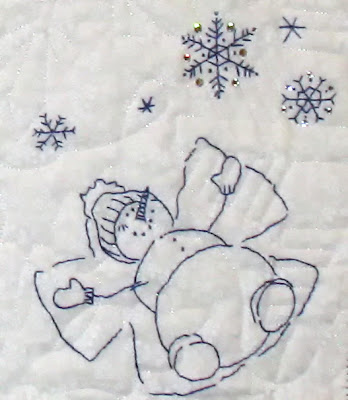 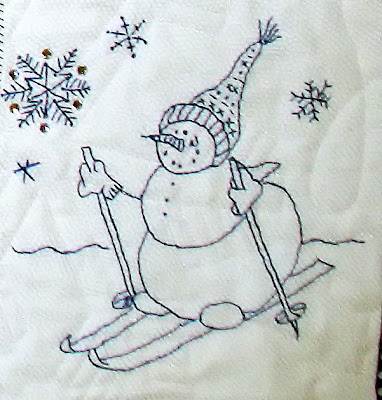 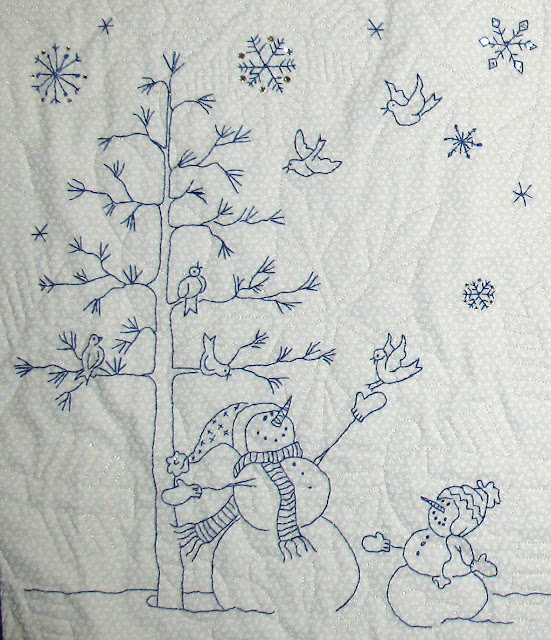 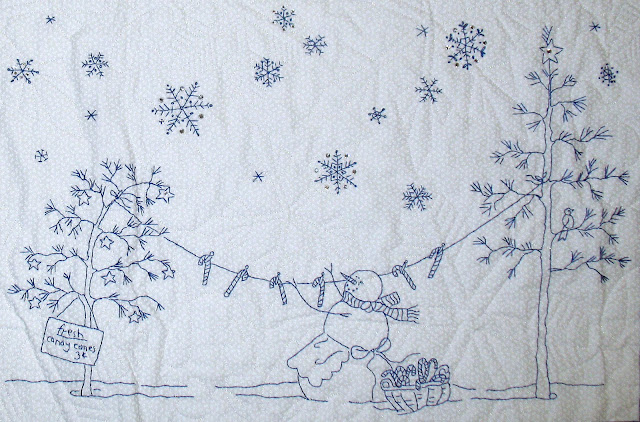 Candy Cane Clothesline (I think this one is my favorite.)

I hope you have enjoyed this walk through my Winter Wonderland quilt.

For inspiration and some eye-popping work, click here.  Thank you, SewCalGal, for hosting this event!
Posted by Barbara at 12:30 AM

Email ThisBlogThis!Share to TwitterShare to FacebookShare to Pinterest
Labels: Quilts

Thanks for close-ups of the details of embroidery; The photos demonstrate your proficiency and are 'fun too see' now that we needn't transport ourselves. Beautiful work, BarBar.

Wow! That is quite the undertaking.. and it turned out so wonderful. You should be quite proud to display that out for everyone who comes to your house to see it. Lovely.. just lovely!

I just love this pattern done in blue - so much prettier for snowmen and snowlfakes. Thank you for showing close ups, just beautifully done.

Oh how beautiful!!! And in my favorite color too!!! I would love to do that quilt, but like you, I am afraid it would sit unfinished for far too long. I will admire yours in the meantime!

Your quilt is amazing with all of its stitchery. Just love that you did it in blue instead of red. Thanks for sharing :)

Wow Barbara, this quilt is beautiful. I love all the blue stitching. Very nicely done.

Love seeing this again...the crystals DO show up on some of the pictures! Lovely!

It's really a beautiful design, and I think you did justice to it. I can see why you could not resist it. Lovely.

You did an absolutely stunning job!

Absolutely gorgeous! You did a fantastic job and the stitchery patterns are precious! Thanks for sharing.

This is an incredible quilt! You've done a remarkable job.

Beautiful quilt, need to keep my snowman collecting daughter from seeing this one as she would want one.

A Wonderful stitching and a wonderful winterquilt.

I love this quilt. I did laugh reading your account of the purchase and making as I could see myself in the story. So glad you finished it. Need to find the pattern myself now.

This is such a wonderful quilt.

OH, I am so in love with stitchery quilts...I have this pattern but haven't started it yet. I adore your version and it is delightful to see this pattern done in blue, it is just gorgeous! Hugs...

Beautiful work - thank you for sharing.

What a fun quilt!! Lovely.

Absolutely beautiful done in blue - so glad you finished it - now it's yours to enjoy.

So wonderful to see this completed and aren't you glad to took the plunge. It is addicting - I still do not have mine quilted, maybe I will put it back on the Patchwork TImes UFO challenge for 2012 - LoL Judy C

WOWZWE!!!! I love this quilt. I too have seen this quilt again and again... but I don't know how to do the stitch. So I keep not buying it. But seeing it made up in BLUE (my favorite color) I need to know the name of the pattern. I have got to figure this one out. Just wonderful. Ps.I'm your newest follower. Hugs

I have to tell you, that quilt has been one of my favorites ever since I saw the pattern in the quilt shop. You have done it great justice! Spectacular! You should be very proud!! It is a lot of work, but well worth your time!

Your quilt is stunning, especially in the blue. Your piecing and stitching is superb.

I loved seeing your quilt. I have that same patterns, but I only have a little bit done on the embroidery, but now I am inspired to work on it after seeing yours completed. I am also using blue. You deserve lots of praise for finishing it and for doing such beautiful work. Thanks for sharing.

Wow, that is so beautiful, I am almost speechless! Love the snowmen, and the blue, etc etc. Just perfect.

Love your beautiful BLUE embroidery Quilt! Fantastic! Thanks for sharing!

This quilt is stunning!

This quilt is phenomenal. The detail is incredible. I'm so inspired by this quilt. Thank you!

Your Winter Wonderland is truly beautiful! It looks stunning in blue. Your stitching is gorgeous.
Congratulations on completing this wonderful quilt.

Oh well done you. This has been worth all your efforts. It's fantastic.

That is certain to be a treasure for many many years to come. It is beautiful!

awww....so cute!! I really like this, very pretty quilt.

Ah :D Here it is again. I just *love* this quilt and I'm so glad you posted it~!

I did that one in red, but I alternate it with another quilt each year, and this was not it's year, lol.

I enjoyed your quilt very much. I have it started in red. One day. YOur quilter did a fabulous job too.

I've only seen this done in redwork before. It looks fabulous in blue too!

This is beautiful. I've made one of the blocks in red for my grandmother, the two by the tree. It was our goal to do the entire quilt, but she passed away this year. I was given the wallhanging I made for her back. I like it in blue. Just may have to try this.

Your quilt is wonderful. I love the snowmen and the way you finished it of is perfect.

Your quilt is just lovely. I love that you used blue.

Several of the ladies in my bee are doing this quilt and I am just in awe of the work and persistence to finish this. Well done!

I love this quilt of yours! You are such an inspiration with your embroidery. The snowflakes and crystals make me want to make it even more. Last time I saw this pattern I almost bought it. Next time I definitly will!

I love your quilt. I love your stitchery and the quilting design too. Thanks for sharing your beautiful work.

this is a popular pattern. I have it started in red. congrats on getting yours done.

congradulations. mine would still be in the package unless i could do it as machine embroidery.

i have this pattern and love it...you have done a very nice job!

I have been wanting to do this pattern for a long time, and now I'm going to have to move it up the list. I love it in blues! Great job!!

Bravo! Love reading how you participated in the UFO Challenge and got it done. This is one spectacular quilt! Happy Holidays!

So cute! I love the blue--it's perfect for the winter scene and snowflakes! The sparkly thread for quilting is a clever idea too--hope I can remember that!

Love this one. I have this pattern and can't decide to do it in red or black but it sure is great in blue. Good job.

LOVE this pattern and your version. I own this pattern, it is not officially a WIP, as I haven't started it (please don't ask how many years I have owned it...LOL) FANTASTIC job. Thanks so much for sharing!!

Wow. I'm not much of an embroiderer but this is fantastic...

Beautiful embroidery! I am a huge fan of snowmen and I love your "bluework" rendition of this quilt.

How special. And congratulations on finishing. It inspires me to get sewing and come back to look at other quilts later. :) Thank you for sharing.

Breathtaking! I absolutely love this. You did a terrific job. I am tempted to try making this one myself.

Wow. your quilt is really special. Glad you finished it.
SallyKingemail@gmail.com

That really is pretty! Love the blue work, and starry border. Congratulation on a quilt well done and finished!

This must be beautiful in person!

Absolutely spectacular! Glad you persevered because you have an heirloom treasure.

You already know I love this, but I figure it never hurts to hear good things more than once LOL

Snowmen and snowflakes, two of my favorite things. I love it!

I love this quilt. Your blue work embroidery is very nice. thank you for sharing.

I love your quilt. Your stitching is beautiful. With all of the red we see at Christmastime, it's wonderful to see a frosty blue quilt. The quilting and the hot fix crystals really set it off. Congratulations on creating an heirloom.

I adore this quilt! Simply gorgeous...would be difficult to store away after winter ..!

It is such a wonderful, happy quilt! Congrats!!!

Simply beautiful! Am a self taught quilter and this just caught my eye! (Still learning and loving my new Janome 3160 QDC)

This is exquisite! WOW!!!