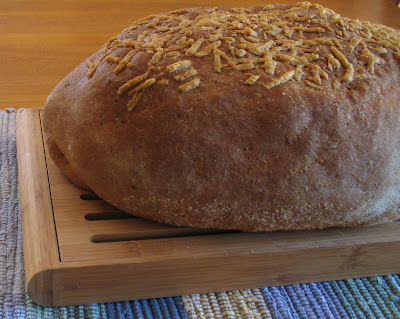 I found this recipe on The Cookaholic Wife blog.  It was an interesting bread to make.  It contains rapid rise yeast.  Whenever I've made bread in the past, I've always had to "bloom" the yeast in water prior to adding it to the rest of the ingredients.  In this recipe, the yeast is added dry along with the rest of the dry ingredients.  I worried that it wouldn't have a way to be activated, but this dough rose fast and high.  Clearly, the dry yeast wasn't a problem.  (I'm sort of a novice bread baker, and so I don't have a good handle on the science of yeast.)

It was quite easy to make.  I used the dough hook for my mixer since I'm too lazy and impatient to hand knead bread dough.  I know some of you really like that part of the process, but having problems with my hands means that I try to avoid those sorts of things.  In any case, the recipe suggests using the dough hook for eight minutes, then hand-kneading the dough for an additional two minutes before placing it in a bowl for its first rise.  I didn't bother with that, simply kneading it with the hook for an additional two minutes.  It didn't hurt it a bit as far as I can tell.

It's quite tasty.  It has a nice crust and a soft center, and there are flecks of red from the roasted bell peppers and green from the green onions that are pureed and added with the wet ingredients. 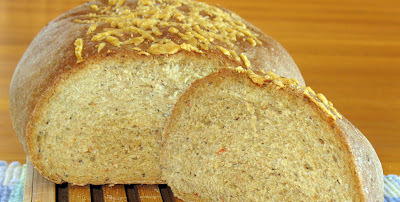 We'll be having this for dinner tonight with another new recipe I found in the latest Martha Stewart Living magazine for Smoky Sweet Potato Soup.  Do you get that I like trying new recipes?  In the same way I never make the same quilt twice, I avoid making the same recipe twice too.  This is a constant source of disappointment to Mike, and so sometimes, I make his favorite things more than once.

I'm not much of a bell pepper fan, but that bread is making my mouth water. I haven't made 'real' bread ever, only banana bread. lol
It must be time to make something for dinner now!